In Bill Simmons' "The Book of Basketball", he undertakes the formidable task of identifying the top 96 professional basketball players of all time and ranking them in order of greatness.

He brings an incredible breadth of knowledge to the task, and makes his case for each player based on stats, achievements, interviews, and opinion.

Simmons is first and foremost a basketball fan. He grew up going to Celtics games with his Dad in the 70's and 80's. As such, he's not an entirely impartial judge of greatness, and cops to a few things right out of the gate:

So we know going in that Simmons will base his rankings more on rings than scoring titles, and we can assume Larry Bird will be deified while Bryant's achievements will be discounted .

What are the measures of Greatness?

To help make his case, Simmons includes all of the players career stats and accomplishments. It's a long, exhaustive, season by season list.

In order to assist in an objective assessment of greatness, I have taken some of these individual achievements and assigned a point score, weighting each achievement based on relevance to greatness. My point system is a total swag and obviously subjective, but it can be applied objectively to all players. 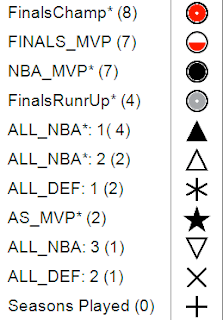 To the left is a legend which shows the points I'm assigning to each achievement, encodes each of the different achievements with a unique symbol and ranks them in descending order.

Those with an "*" are long-standing awards which came into existence before 1960 and can be used to compare all players across the last 50+ years.

The NBA Finals MVP was introduced in 1969, so can't be used as an objective measure across time. I'm giving an NBA Championship the most points because all of the greats (with the exception of perhaps Wilt Chamberlain) concur that rings matter most.

So a Championship should count more than an NBA MVP. "AS_MVP" is All-Star MVP. The 'Seasons Played" marker ("+") does not have any points associated with it, but provides a way to monitor the seasons where a player was active.

Why not include other stats like total points, rebounds, assists, etc in the measure? Because each player contributes differently and fills up the stat sheet differently. The weighting of different stats (rebounds, points, assists, steals) is hard to normalize.

Moses Malone was a rebounding machine, Jordan was a scoring machine, Magic was a play maker. Ultimately, how a player's unique talents contribute to the success of their team is what should matter most, and that success can be objectively assessed based on achievement.

So Who Does Simmons Think is the Greatest?

Simmons' Pyramid consists of five levels. The top level is referred to as "The Pantheon" and consists of the twelve greatest basketball players of all time. Those players (as of 2008 when Simmons wrote the book) were:

Because The Pantheon is based on achievement to date, it will never be a static assemblage of players. New players will always be knocking on the door. Kobe Bryant has been knocking for a while, but is he in yet? And, more importantly, has he passed Bird yet?

Has Kobe passed Larry yet?

When Simmons wrote the book, Bryant and Bird each had three NBA Titles to their names. Bird also had three League MVPs and two Finals MVPs. Bryant had no Finals MVPs (Shaquille O'Neal was the Alpha Dog on the three Championship teams) and one league MVP. Looking at both Bird and Kobe's careers over the last 14 years, we can see that the Birds placement over Bryant was accurate after 12 Seasons. Bird had clearly achieved more than Bryant up to that point. 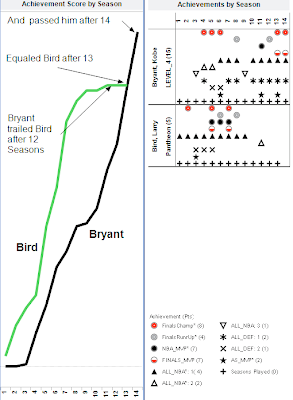 The Lakers won the title in Kobe's 13th season and Kobe was the Finals MVP. The Lakers then won another championship in Kobe's 14th season (2009-10), giving Kobe five titles to his name and a second Finals MVP award. While Larry Bird was an early achiever, plateauing after nine years, Kobe got off to a slow start but has continued to climb every year since his 4th Season. After 13 Seasons, Kobe was dead even with Bird, and passed him after 14 Seasons.

It would appear that Kobe is now in the Pantheon

Longevity plays a huge role in a player's achievement score. While Bird's career was cut short by injuries, Kareeem Abdul Jabbar played for 20 seasons, won a championship in his nineteenth season, and finals MVP awards in both his second season (1971) and his sixteenth (1985).

Kareem kept going and kept achieving at a high level. Most players are like Bird, they peak and then level-off.

Bill Walton (Simmons rank: 27) is perhaps the best example of a player who's potential was cut short by injury. He was healthy through four seasons. In that time he had racked up a championship, finals MVP, and an NBA MVP. His achievements through four years surpassed both Larry Bird and Michael Jordan, and had him fifth all time behind Magic Johnson at that point in their careers.

Some players, like Walton, burn brightly for short periods then quickly fade. At Walton's peak you could make an argument for him being in the Pantheon.

Hakeem the Dream had a transcendent season in 93-94 where he won the NBA MVP, Defensive MVP, a championship, and the Finals MVP. No other player accomplished all of that in one season. How do you account for that kind of single season dominance in the all-time measure?

Simmons accounted for it by placing Olajuwon in the Pantheon, when his total careers stats don't quite afford him that high of a rank.

Whose Place in the Pantheon Did Kobe Take?

Kobe's clearly in the Pantheon now. But how do you compare someone who's still adding to their achievements to those whose careers are complete?

Most players have reached their peak by their 14th season and then plateau. The 97-98 Season was the 14th Season after Jordan entered the league (but only his 12th complete season as a result of the baseball sabbatical). In the 97-98 Season, Jordan won his 5th NBA MVP, the Bulls defeated the Utah Jazz for Jordan's 6th title and he also won his 6th Finals MVP award. Jordan retired (for the second time) after hitting the championship-clinching shot at the buzzer in game six.

Magic, Bird, and Russell were effectively done after 13 Seasons (Magic briefly attempted a comeback years later). Chamberlain and West retired after 14. Kareem is the one Simmons Pantheon player who was still going strong after 14 seasons - until Kobe. Assessing all of the Pantheon players at the 14 year mark is one way to see where Kobe currently stands.

The attached static charts show Simmons Pantheon of 12 plus Kobe. The line chart shows the trend of the achievement score through time, and the symbol charts below show the achievements by season.

The charts only contain the first 14 seasons of each player and only include the common awards (Those in existence in pre-1960). The most significant exclusion is the "Finals MVP Award". 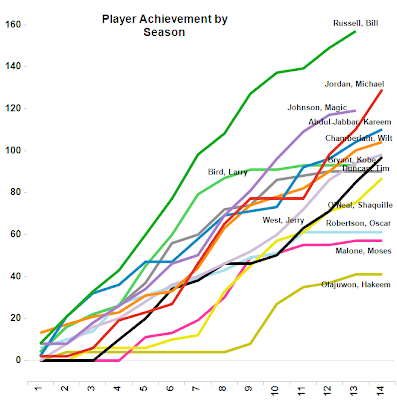 Through 14 seasons, Russell is first, Jordan is second and Bryant is in seventh position, just behind Jerry West and just in front of Larry Bird.

The player who Bryant displaced in the Pantheon was Hakeem Olajuwan.

If you were to include ALL of the players in Simmons Pyramid using this criteria, three other Celtics who were on the championship teams of the 60's jump into the Pantheon: Cousy, Havlicek, and Sam Jones, with Cousy (a Simmons Level four player) jumping from 21st to fifth position all-time. Shaquille O'Neal, Oscar Robertson, and Moses Malone are the Pantheon Players who are displaced (along with Hakeem).

So Who's in The All Time Pantheon now?

If you were to include ALL of achievement scores (pre and post 1960), ALL of the Seasons, and ALL 96 Players, the Simmons' top 4 (Simmons' rankings are in parens) are the same players but change order. Kobe is firmly in the middle and still climbing - looking down at Bird. . . But he's still looking up at Jordan.

Check out "The Ivory Sofa " for a fully interactive version of the visualization.