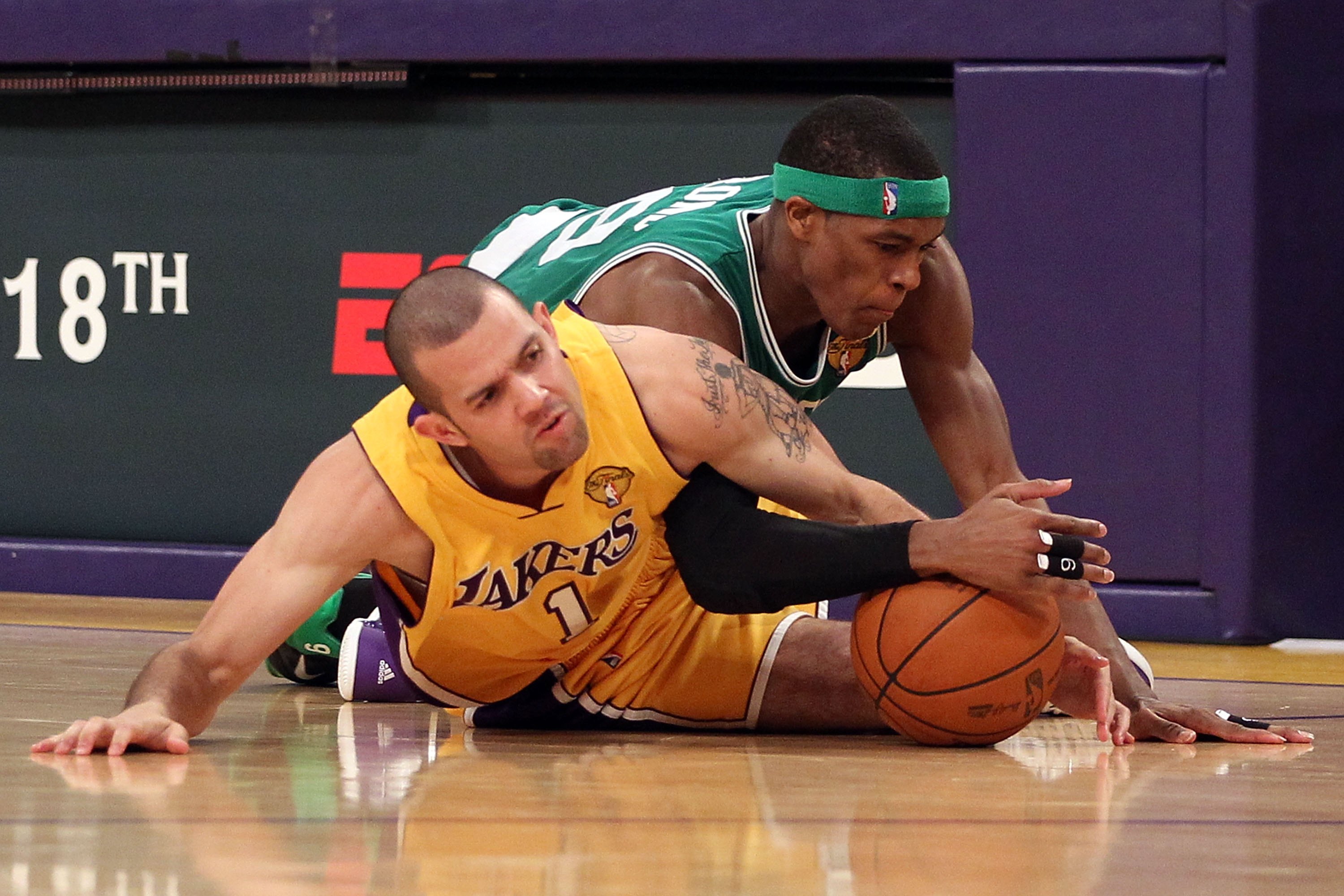 The playoffs are where the NBA happens. It's where the best players in the league become better, the under-rated players create their name, and the unknown players get known. Every year, we see before us the development of players.

For example, before last year, did you know who Trevor Ariza was? Maybe for a few flashy dunks here or there, but the 2008-2009 NBA Playoffs is where he created his name.

Let's begin with the difference makers who were unfortunately eliminated in the first round and move up to the Finals.. 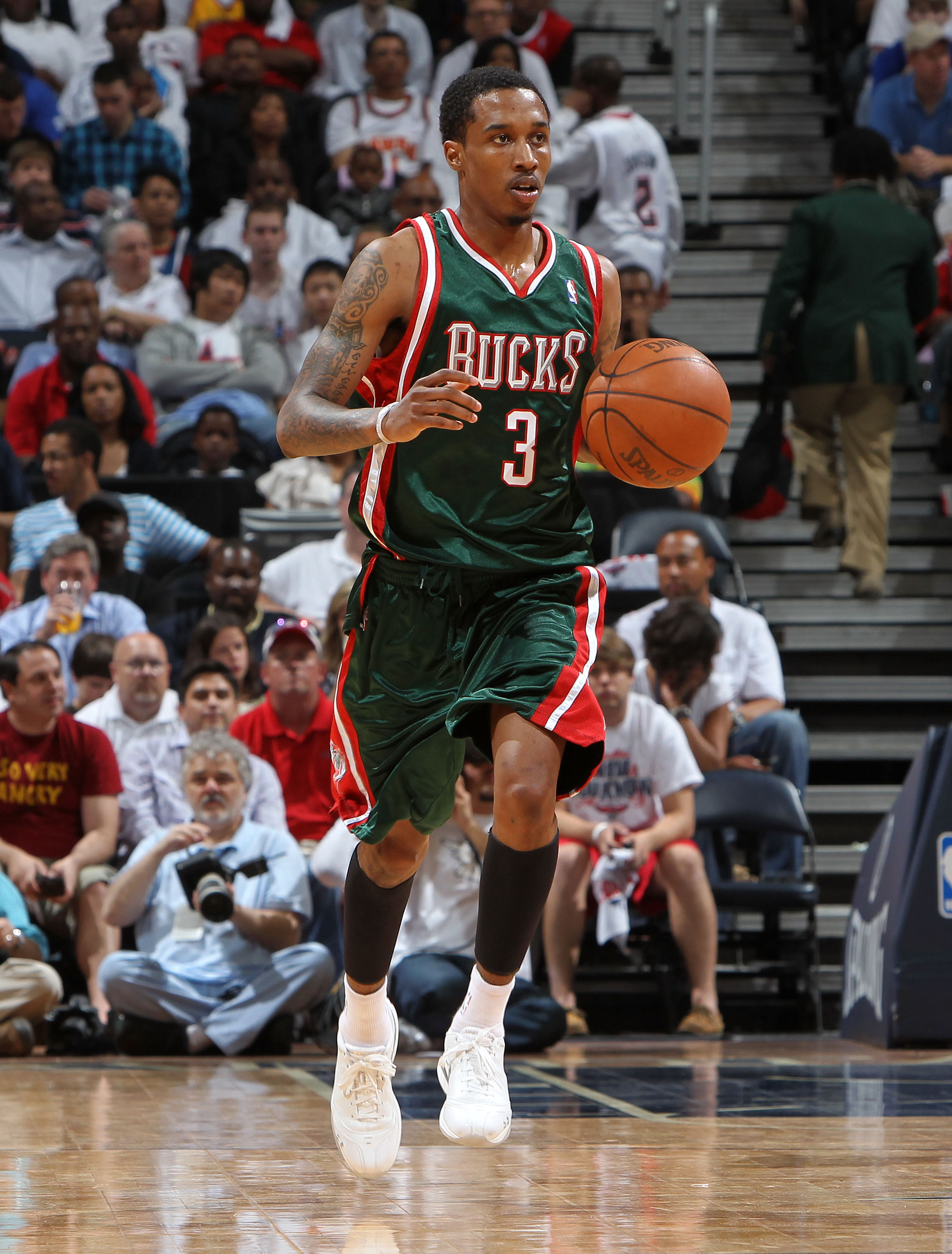 Brandon Jennings is the future of the Milwaukee Bucks.

He was the brightest spot of the Bucks' offense the entire first round, averaging almost 20 PPG, which is five more then his season average.

He stepped up most when it counted, when their team was struggling to score. Please keep in mind that he is only a rookie, so for years to come and a bit more back up from his team, and look out for the Bucks!

The most memorable game from Jennings in this offseason would be Game One of the series, as he scored 34 points in an away game. This was a mood setter for the Atlanta Hawks to watch out for this kid, and he just kept rolling.

Unfortunately, they lost the series. 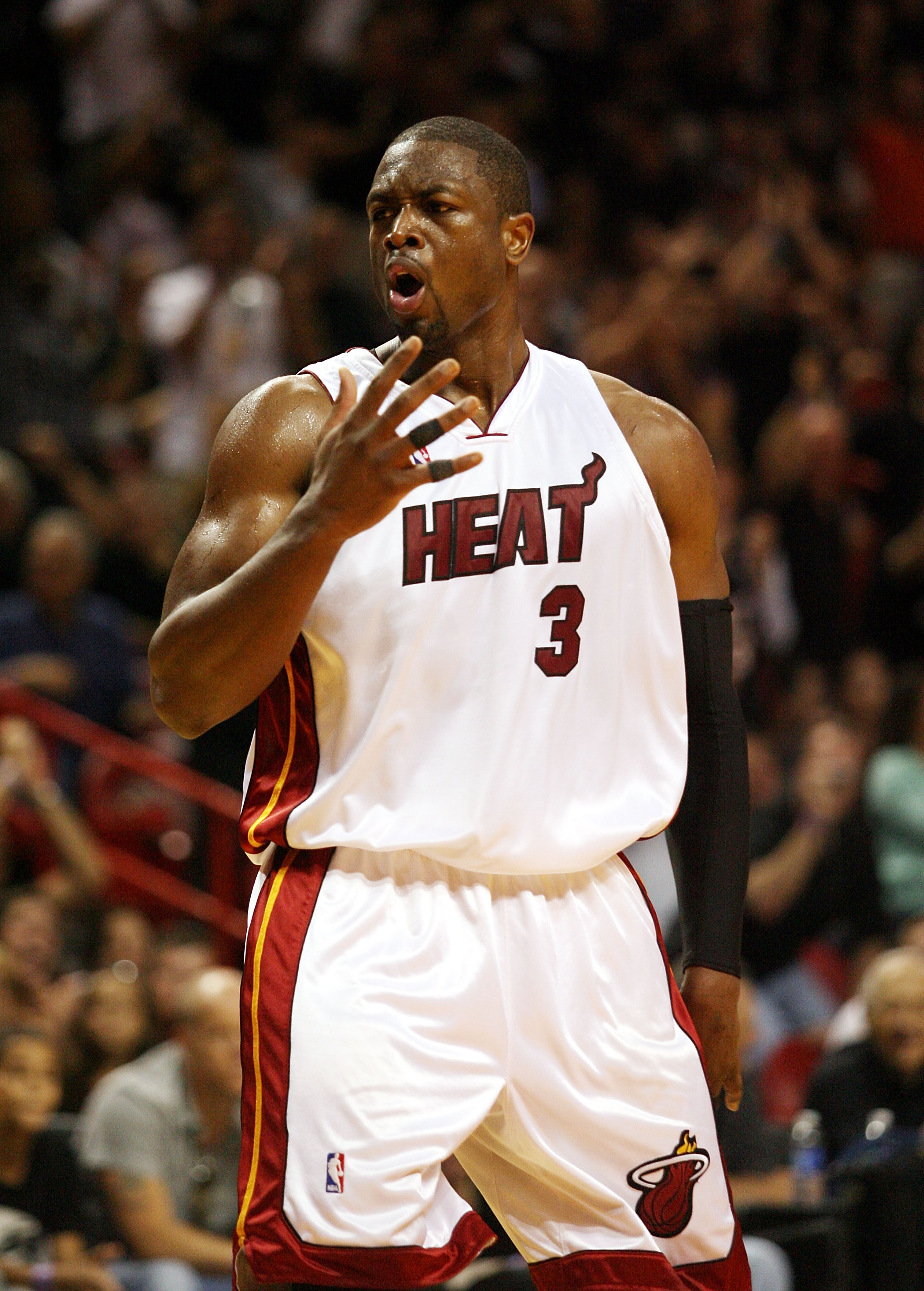 D-Wade is one of the best players to touch the ball, too bad he was the only player on his team getting it. Wade averaged a crazy 33 points in the first round of the series going off in every game, but unfortunately, the Heat lost the series 4-1.

Wade had absolutely no help from his teamates, unless you want to count Jermaine O'Neal's entry in the "Worst Playoffs Shooting Percentage". Wade was just brilliant, but it's a shame he had to face Celtics in the first.

The most memorable moment of Wade for this offseason would definitely coming from their only win in the entire series. With the series on the line in Miami, they were down 3-0 and were about to lose.

Wade caught fire, and I don't mean just a regular kitchen fire, I'm talking forest fire. With their team down by eight, Wade hit two consecutive three-pointers, and then he wouldn't stop. He hit three more straight, taking the lead in the game and blowing it scoring 15 straight Miami points from the end of the third to the mid fourth quarter.

After that, he just took over the game and scored 46 total to end off the game.

Truly one of the greatest playoff performances this year. 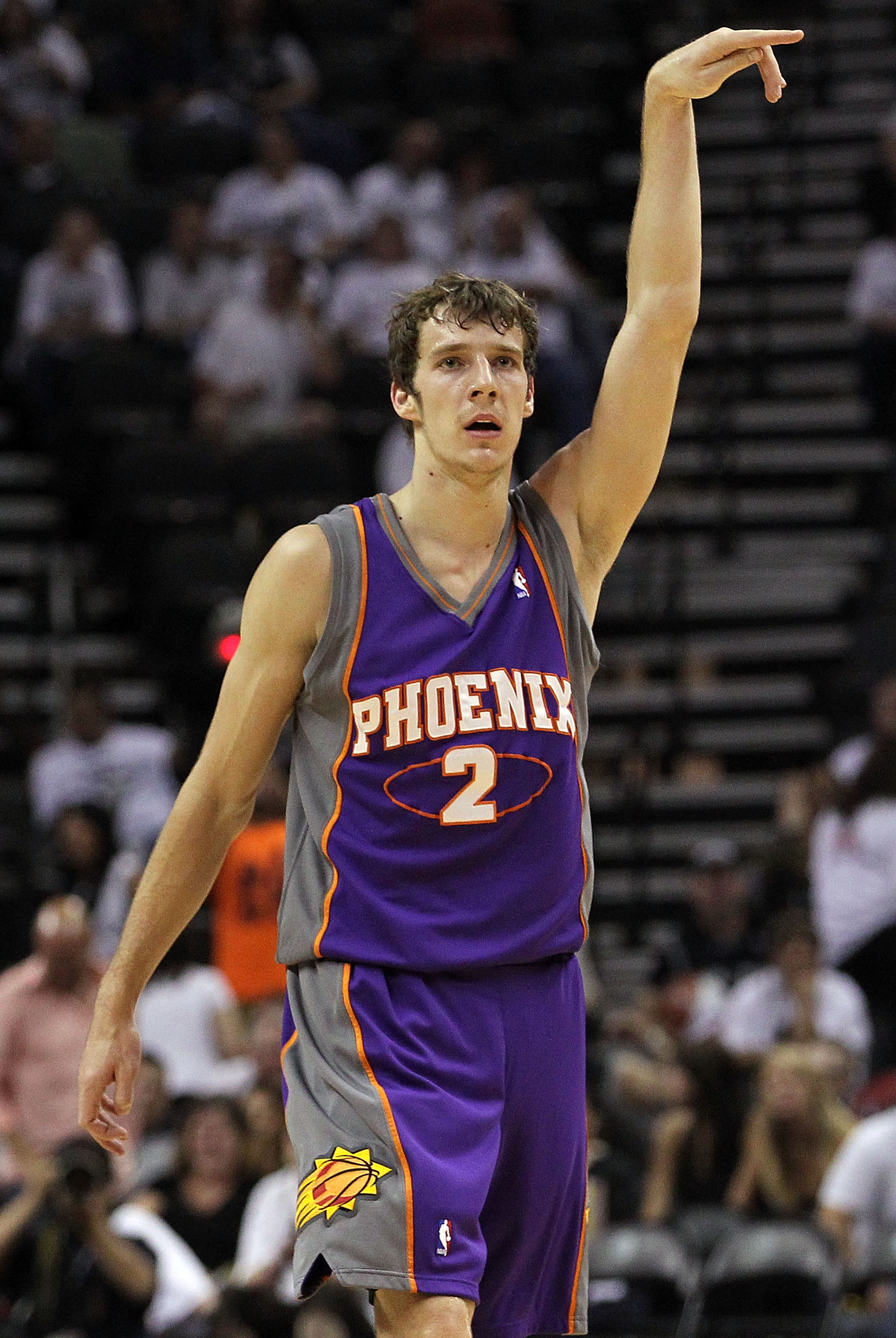 Gorin Dragic played the most superb second round game from a bench player.

He came in off the bench for Steve Nash and made about every shot he was able to take. He's a very good shooter, and he has a good ability to pass. This year probably showed the league that Suns have a back up PG better then most teams starting PGs.

Dragic didn't go off every single game, but he went to work when it counted most. The most memorable play from Dragic this offseason would be against the San Antonio Spurs. Dragic was just simply on fire, scoring 26 Points in that game, but 23 of that came from the fourth.

Dragic went crazy, as he hit a couple three-pointers, including an And1 3. His role in that game was to give Steve Nash time to rest, but he ended up playing the entire fourth while Nash cheered from the side.

Kendrick isn't a guy that puts up numbers, but he is probably the biggest role player I've seen this entire playoffs. Perkins had the task of banging with the bigs of all the elite teams.

In the Eastern Semi Finals, he had to guard Shaq. He did a great job of handling him, but people didn't notice him. In the Eastern Conference Finals is where he got complete recognition for his defensive abilities.

Perkins had to guard Dwight without any help on defense. That is the entire Orlando plan: give it to Howard, draw the double team, kick it out, and hit a three-pointer. Perkins alone controlled the defense of the Celtics and the offense of the Magic.

Too bad Perkins is out for the final Game Seven , he would have been a huge difference maker. 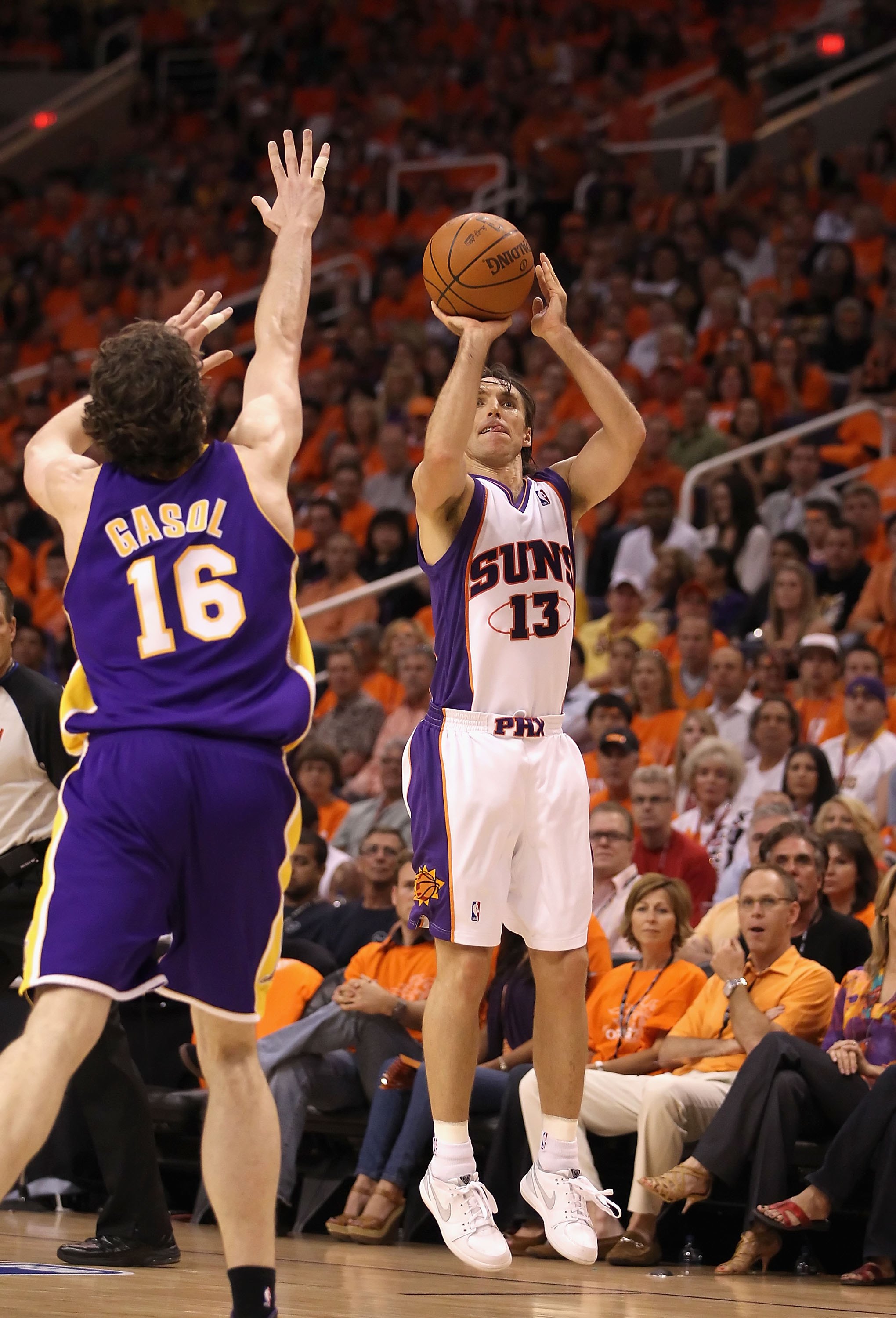 Steve Nash may be old, but he just had one of his personal best performances this year in the playoffs. Nash averaged 18PPG, but the average isn't what counts.

As usual, Captain Canada managed to get dishes to his players, averaging over 10 APG and making his teammates' lives easier. He brought a new aggression to his game I haven't seen before. Nash took over the game late whenever his team needed him to, especially in the Western Conference Finals.

That would be Nash's most memorable moment. When the game was close and the Suns were down two, Nash rolls off a screen and hits a two-pointer. That would happen about five times.

That was one of Nash's best performances. Just dominating Pau Gasol off the screen and rolls, he just seemed unstoppable! Too bad Lakers were just too much to handle. 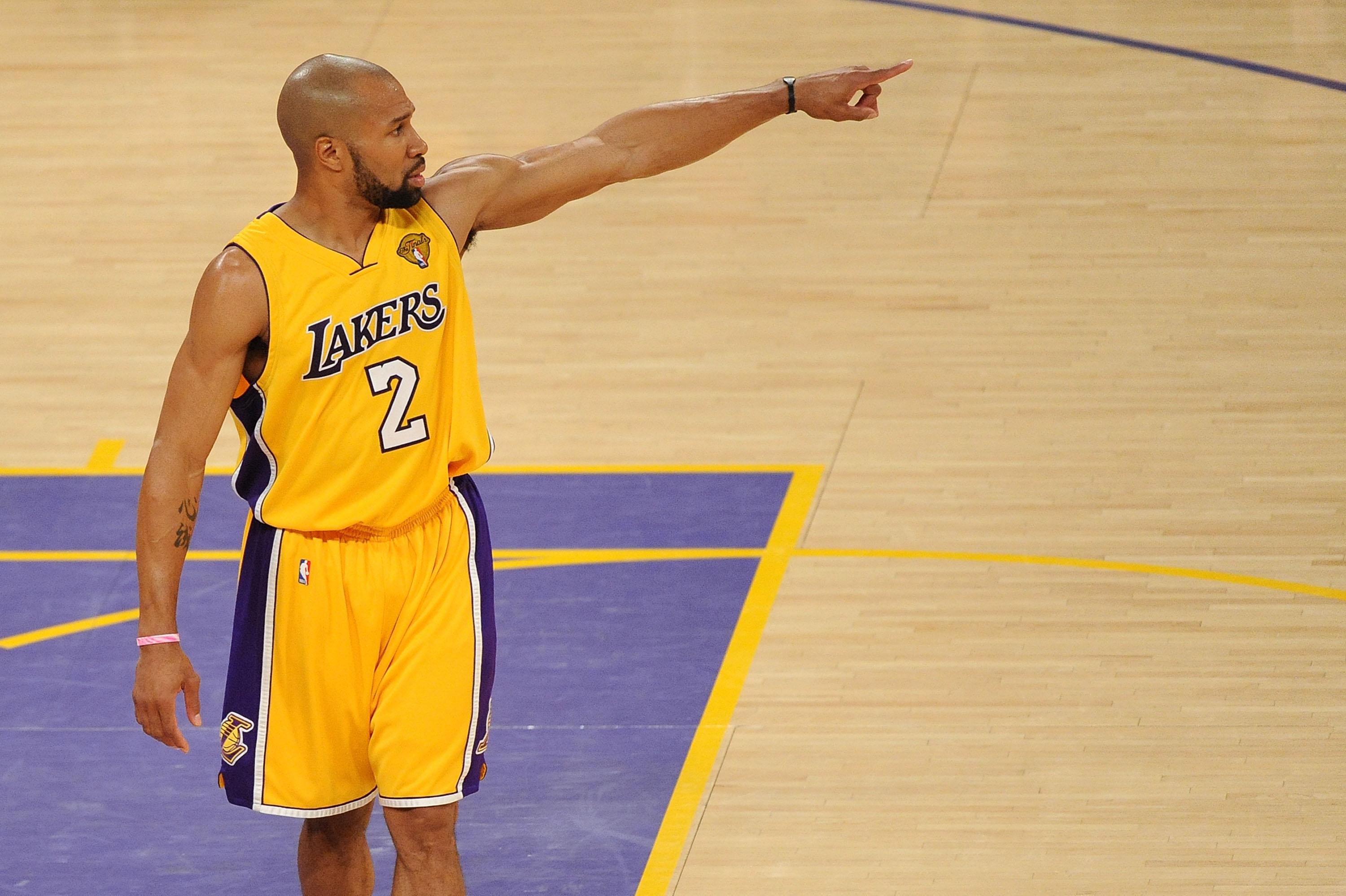 With two seconds left in the ball game and the score tied 92-92, the Lakers were inbound, the ball goes to Kobe. He shoots, and HE HIT THE GAME WINNER!

Wait a second, rewind back 20 seconds.

Lakers down by three with one time-out left, they're running the floor, Fisher dribbles up the court and HITS THE 3!

For every Kobe Bryant game winner, Derek Fisher will have most likely hit the previous bucket.

Kobe Bryant is the best closer on the Lakers and maybe even in the game, but Fisher is one of the most clutch players on the Lakers.

This guy will make the biggest shots that count in the game. When he shoots the ball with less than one minute left in the game, you know it's going in.

The most memorable moment for Fisher in this post season would be the game where he basically carried the Lakers in the fourth quarter. The Lakers were struggling offensively, Kobe is hitting bricks, and Fisher was the only guy in the court scoring.

He scored eight straight Laker baskets, including the dagger with a breakaway-And-1 over Garnett, Perkins, and Ray Allen.

This guy is clutch.

This is not an individual notice, because if I were going to put each of these guys into a number, this would be a top 25. This entire bench stepped up, from the start of the playoffs to the end, these guys showed up every night.

The biggest step up out of all of these guys would have to be Big Baby Davis.

He is consistent every game, and he is just a monster. His highlight play would be when he grabbed the offensive rebound and put it back with the foul to deliver a special dagger to the Lakers in Game Five, with a total of 18 points.

This entire bench improved, from Nate Robinson scoring big buckets and hyping the crowd, to Rasheed Wallace proving to everyone he wasn't a bust pickup for the Celtics. Don't forget Tony Allen; probably the best defender Kobe faced this year.

The most memorable moment from this crowd was in Game Five of the Finals. It was a close game, and then they just broke loose. The Celtics bench scored 21 points in the fourth Quarter, topped off by Big Baby's and Nate Robinson's final buckets.

Baby led the charge, but every one of those guys scored in that quarter, and they are probably the best bench this year. 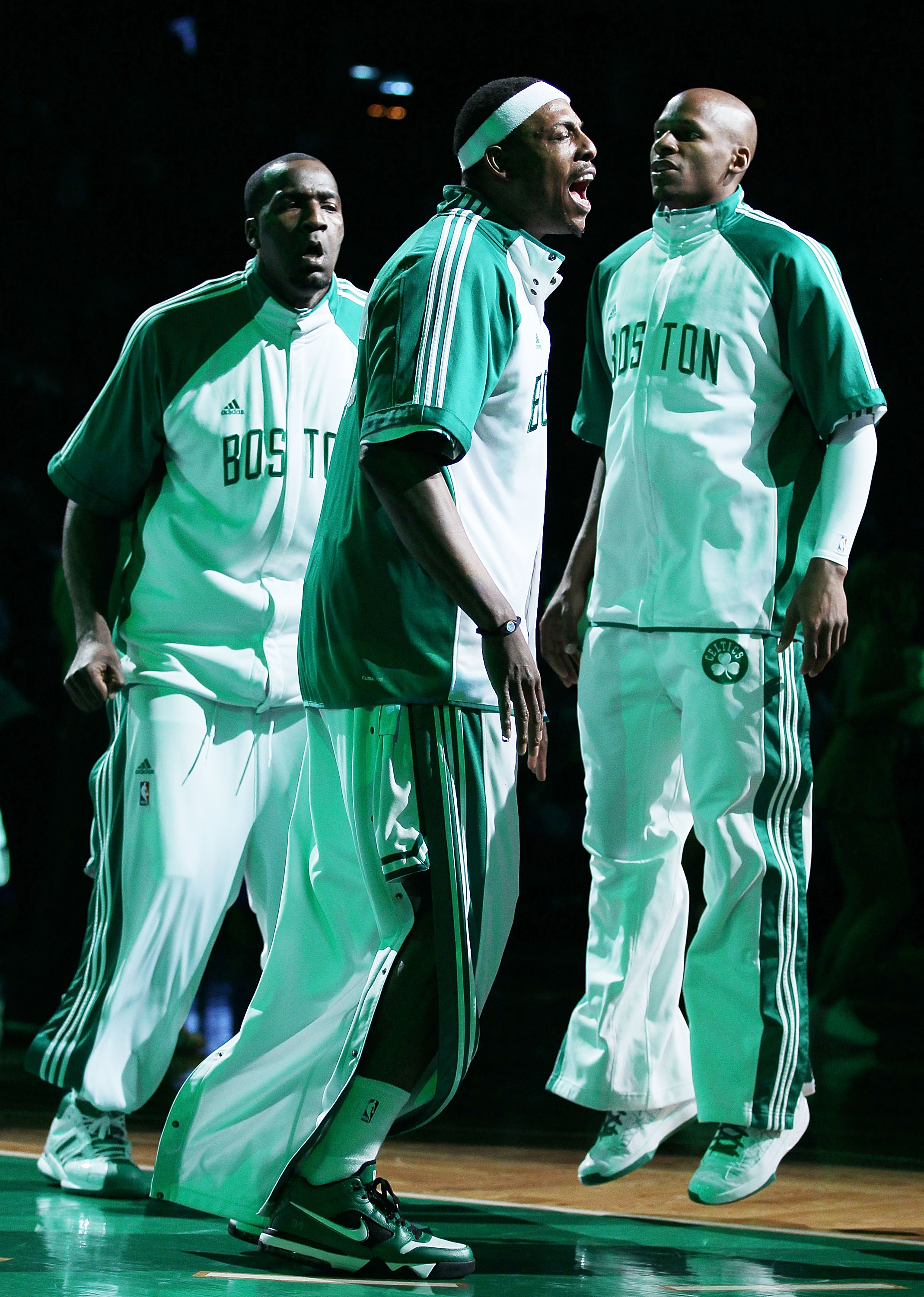 Another involvement from the Boston Celtics, although it isn't the last one.

The previous one was the Boston Bench, but this one is a big recognition the Big Three.

All of these guys had their own moment to shine. Garnett scored 30 in the finals, Ray Allen hit eight 3's to break the Finals record, or Paul Pierce just carrying the team when they need to be carried the most.

These guys deserve a lot of recognition. Coming into the playoffs, they were the team everyone thought would probably lose to Wade, be another obstacle course for Cleveland, or even be a part of the Magic's sweepstakes.

Instead, the Celtics proved each one of those statements wrong.

They made it to the finals with the aging big three still showing everyone they all have it! If they don't win the championship, they deserve an award for making it there because they had the toughest road to travel. 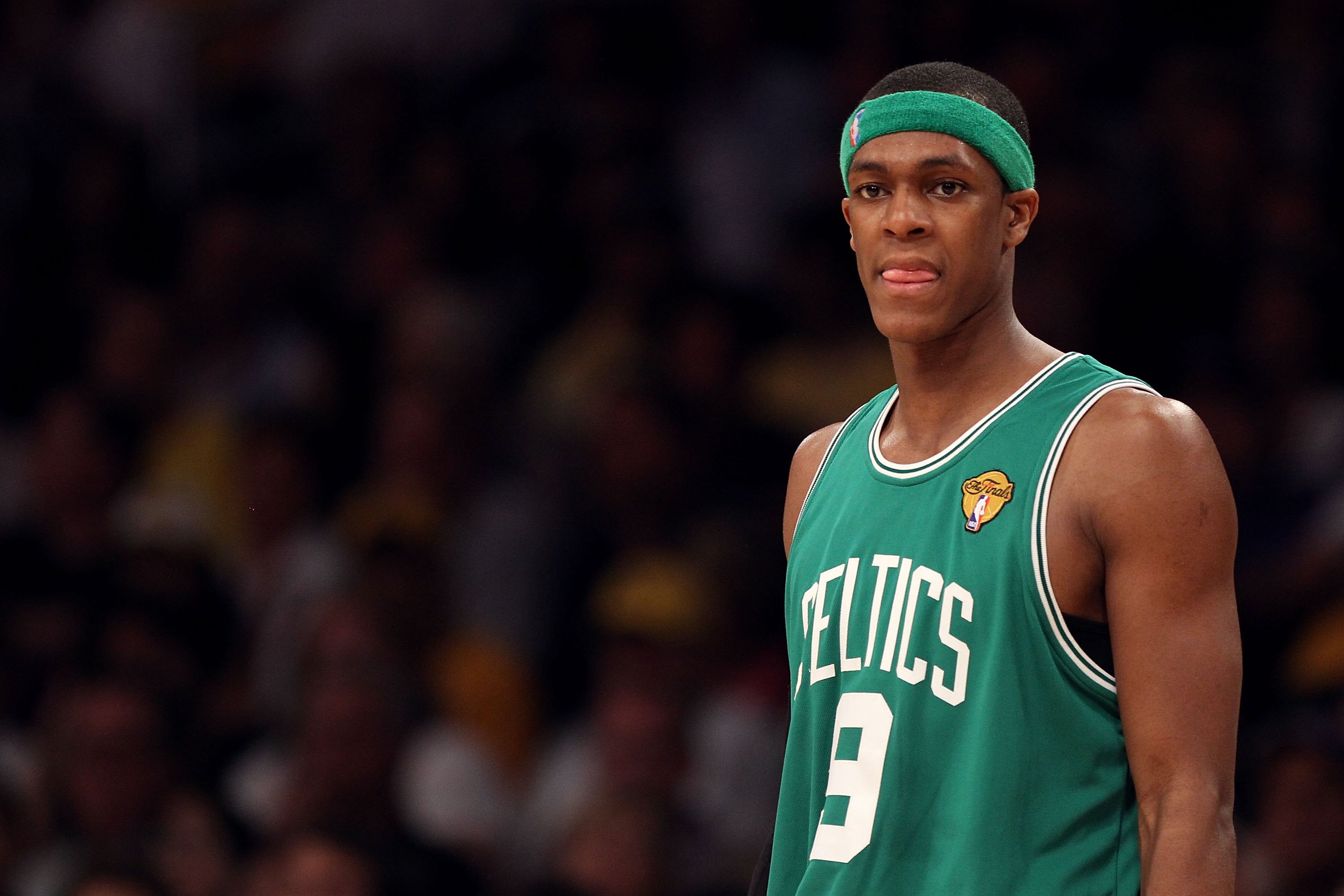 I basically mentioned the entire Boston team, but they deserve to be noticed after what they had to go through this season.

Rondo is the brightest spot in this team. The Big Three are getting old. Although they can shine on their own time, they lack consistency. Rajon Rondo is the only consistent player on the Celtics in scoring, assisting, and even rebounding. He hustles for just about every rebound or loose ball out there, and you just gotta love his heart.

His biggest highlight would be leading his team through the best team in the league. The Cavs had no one that could stop Rondo from scoring or getting the ball to his other teamates. This guy stepped up big.

And it's a good thing he did, or the Celtics wouldn't be here. 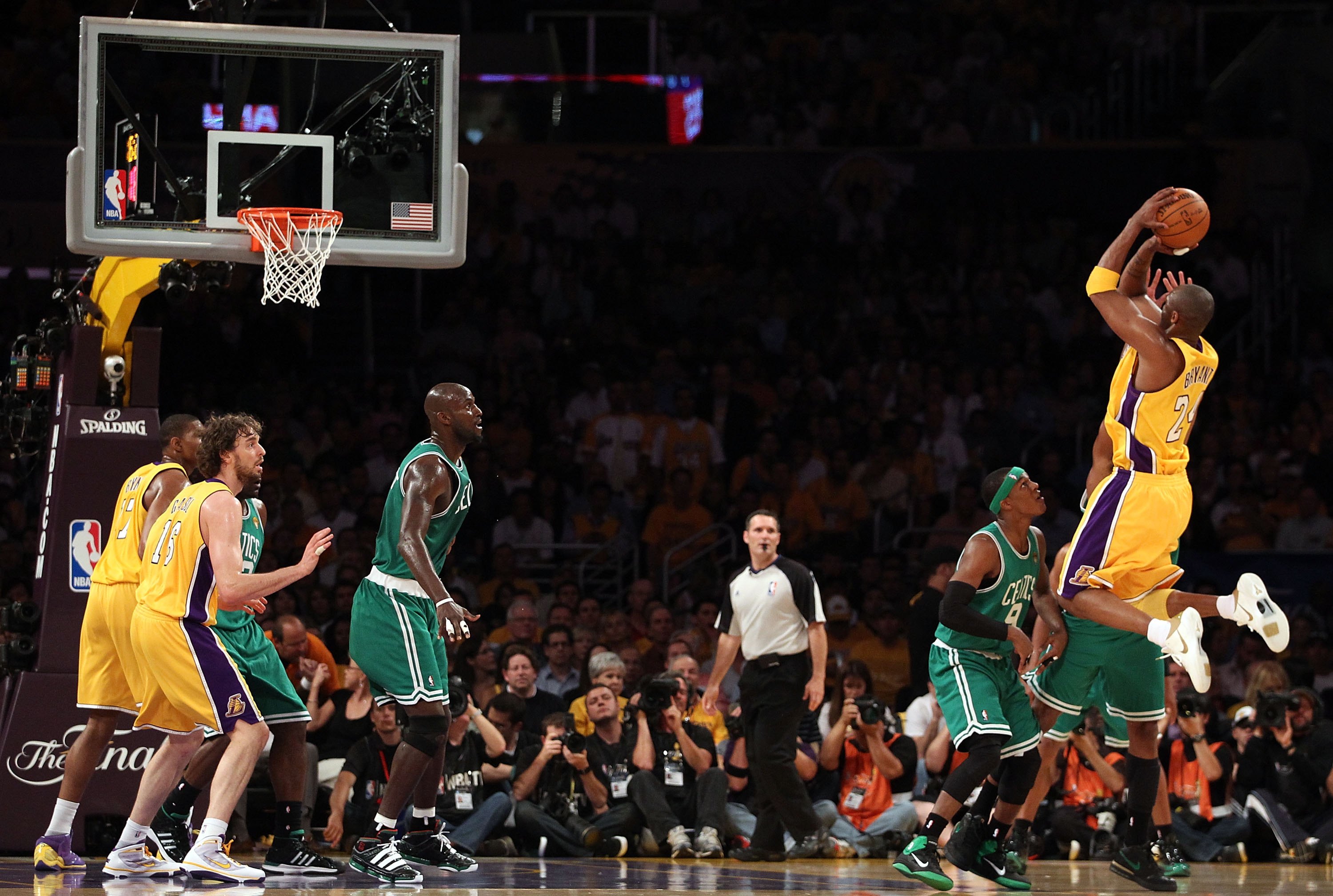 Is it just me, or did all of those LeBron fans finally shut up?

The entire season, there has been talk about Kobe Bryant being too old, LeBron James being better than him, and so on. With Kobe missing the MVP again to LeBron, everyone says Kobe's just about to retire.

Well who better to be number one on the list than the guy who's proving everyone wrong? Kobe Bryant has had one of the best postseason performances in his career. He is getting every rebound in sight, passing the ball, and being patient to let his team score. On top of that, he's scoring 30+.

With LeBron fans finally out of the way, everyone in the media has their focus on the best guy in the league, and those talks are back again. Is it just me, or is Kobe being compared to Micheal once again?

Bryant is the best player of our generation, and he is just on a roll this entire postseason putting up career numbers in every category, and doing it consistently, while proving he's the best in the league.

Kobe Bryant is the most improved player from the regular season to the playoffs, and I don't think anyone can disagree on this one.