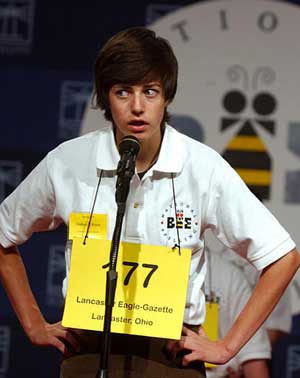 Every year a group of incredibly intelligent middle schoolers from across the country gather in Washington D.C. for the annual Scripps' National Spelling Bee.

While, on the one hand, the idea of a bunch of prepubescents spelling obscure words most of us have never heard of, and could never use in a sentence, sounds worse than watching paint dry, the Scripps' National Spelling Bee has captured the nation's imagination in a most peculiar way.

The National Spelling Bee has also given us a handful of hilarious moments as well. 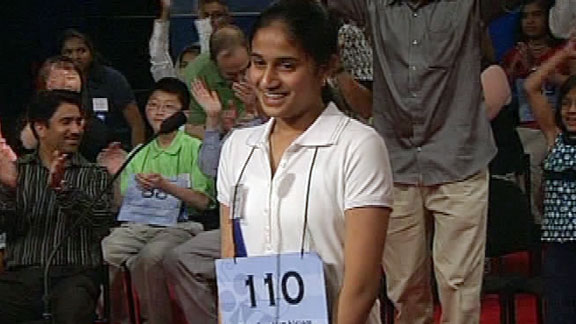 Jimmy Kimmel takes on the 2009 Scripps National Spelling Bee champion Kavya Shivashankar, a 13 year old from Kansas. In an effort to stack the deck in his favor, Kimmel had Guillermo play the role of "pronunciator," but that didn't help when Guillermo pronounced "facet" as "FAH-KID."

9. Incunabula - Can I have its spelling of origin?

After a word is read to a spelling bee contestant for the first time, the contestant asks a variety of questions, like "Can I have the language of origin?" or "Could you use the word in a sentence?"

It can be mundane, and to the average viewer, seemingly pointless.

In the 2005 Scripps' National Spelling Bee, Katie Seymour tried to sneak a bit more information out from the announcer, asking dryly "How do you spell that?"

8. Palatschinken - Can I have it with Erin Andrews' microphone? 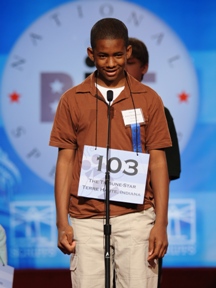 13 year-old Kennyi Aouad was not in his first spelling bee when Erin Andrews stopped by to interview him, and it showed. In response to her question, Aouad took the microphone out of her hand, and when she calmly hinted that she should hold onto it, he was unrelenting.

Hey man, if I was in the Scripps' National Spelling Bee, I'd try to take Erin Andrews' microphone, too. When else are you going to do it?

7. Chinook - Are you gonna eat your tots?

Spelling Bee participants are often known for their idiosyncratic mannerisms when attempting to divine the spellings of words. While trying to spell the word Chinook, Dominic Errazo channeled his inner Napoleon Dynamite, asking "Do Chickens have large talons?"

6. Sardoodledom - Could you say it while laughing?

This is Kennyi Aouad again, from the year before the Erin Andrews incident. Here, Kennyi got a case of the giggles with what was admittedly the funniest of a very short list of funny spelling bee words.

When Kennyi asks for the definition, he sounds like a Saturday Night Live cast-member trying to keep a straight face because Jimmy Fallon is breaking character to get everyone to laugh on live t.v. Again.

5. Negus - Could I have the language of origin, muh brutha? 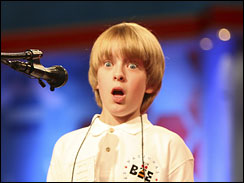 Poor Andrew Lay of North Carlina started out cool, and did everything in his power to stay that way.

However, you can clearly see on his face that every subsequent clue as to the spelling of "Negus" has him thinking to himself "This may seem crazy, but I really think they're trying to get me to spell Niggas."

The look of shocked relief on his face when he spells it correctly is priceless.

4. Serrefine - Could you freak every one out on live television? 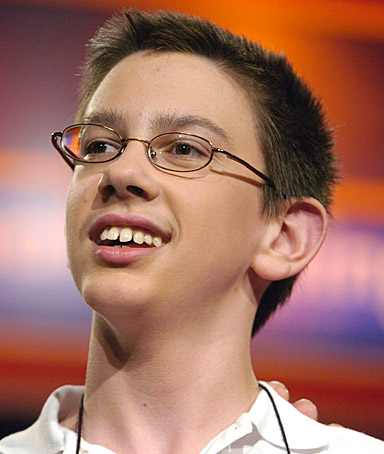 At some point during this video, you may need some serrefine.

3. Numnah - Does it have an alternate pronunciation, douchebag? 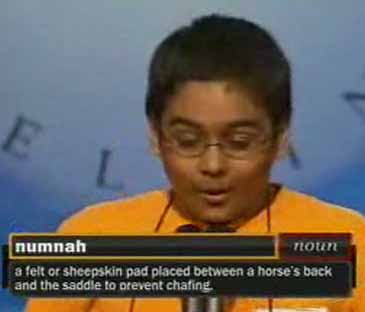 2008 Scripps' National Spelling Bee champion Sameer Mishra won the whole thing on "guerdon," but not before a very brief moment after being asked to spell "numnah" during which he clearly thought the announcer asked him to spell "numb-nuts."

2. Alopecoid - Could you use it lying on the ground unconscious?

During the 2004 Scripps National Spelling Bee, Akshay Buddiga stepped up the microphone, calmly listened as the announcer asked him to spell the word "alopecoid," then calmly passed out, calmly got back up, calmly spelled the word, and calmly went back to his seat.

While the word alopecoid means "fox-like," Buddiga was really more possum-like with his playing dead routine.

Buddiga, who would have been the second member of his family to win the spelling bee, went on to finish second in the 2004 tournament.

1. Euonym - Could you scream it in a sentence? 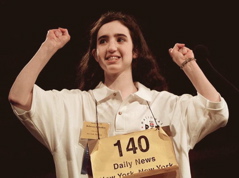 Rebecca Sealfon won the 1997 Scripps National Spelling Bee when she was given the word "Euonym." Either Rebecca already knew the word or was just thrilled that the tournament was finally about to end, because she started screaming like she was on fire.

Euonym means "a name that is apt or fitting."

By the way, watch it with the sound off and you'll swear she's doing an Andy Kaufman impersonation.