Article originally appears on Kyle's NBA blog, TSCblogs.com
Folks, I have been issued a challenge.  A colleague of mine – for the moment, let’s call him Nole Cowlin – is an Orlando Magic backer.  He recently reached out to me with this statement:
"I know you’re a Lakers fan, but how can you possibly say they are a better team than the Magic are right now after that beating they laid on the Hawks?  I want to see you make a case the Lakers still a legitimate shot to win the championship."
-NOLE COWLIN
Well, I accept your challenge, Mr. Cowlin.  And I appreciate you coming to me with this.  I believe this is sentiment of yours is shared with many NBA fans across the country, and you presented it without exclamation points or your caps-lock on.  So I commend you.

Let’s start with some groundwork on the Orlando Magic.  Now, they are indeed a fantastic basketball team, and are playing their best ball of the season.  As I detailed in an earlier column, they play an offensive chess match, calculative in their spacing and passing, and they have the perfect recipe of outside shooting and interior strength to take out any team in the league.
Of course, they are not without their weaknesses.  Dwight Man-Child Howard may be the most potent defensive force in the league today, but he is in total lack of an offensive repertoire.  He’s currently preying on undersized Eastern Conference centers to get offensive put-backs, but once he faces up against a Shaquille O’Neal or even an Andrew Bynum, his foul trouble will return and he will begin to look remarkably average.
And as for Vince Carter, he has adjusted smoothly into Stan Van Gundy’s system in Orlando.  But he’s still Vince Carter.  And Vince Carter has yet to show up for big games.  I’d love to be proven wrong here, but until I see him take over in crunch time, I can’t rely on him to carry the offense in the pivotal moments. 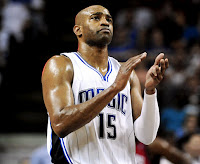 As it currently stands, the Orlando Magic can beat whoever comes out of the Boston Celtics-Cleveland Cavaliers matchup, especially if that series lasts a rough six or seven games.  And it’s true they had a strong opening-game showing against the Atlanta Hawks, a 41-point rout on Tuesday night.
But one blowout does not a champion make.
First, let’s see the rout for what it was.  This is the NBA. These aren’t middle-schoolers.  On any given night, any team can catch fire and light up their opponent.  It happens from time to time, but it can just as easily become reversed in the next game, and rings are not handed out after one night of basketball.
As impressive as that rout may have been, I can guarantee you the rest of the Atlanta-Orlando series won’t go as smoothly.  Though they should eventually emerge victorious, the Magic will not sweep the Hawks.  Lock that prediction up, because it’s gold.  The Hawks have just too much firepower with the Joe Johnson/Josh Smith/Jamal Crawford trifecta.  But the Hawks are too volatile to make it deep in the playoffs, and yes, the Magic are playing way above their heads.

So, let’s bring this argument in the Lakers’ direction.  The Utah Jazz, the Lakers’ second-round opponent, are way, way better than the Hawks. They have better players, a better coach, and though they have an identical record, they did so in a much tougher a deeper conference. They also have arguably the best point guard in the game in Deron Williams, a man who’s skill set I would hug if I could.  Plus, they just knocked out the Denver Nuggets, a team that many experts predicted would make the Western Conference Finals.
And the Lakers just took it to them for two straight games.  Convincingly.
Of course, I am biased.  And like the Magic, I don’t think the Lakers are going to sweep the series.  But I like what I’m seeing from the Purple and Gold right now.  Pau Gasol is playing with urgency, and meshing splendidly with Andrew Bynum, creating a down-low duo that is very tough to match up against. Kobe is taking smart shots, but moving the ball around enough to get others involved, and his numerous injuries look to be healing up nicely.  And Ron Artest is shooting better, moving better on D, and keeping his crazy at a minimum.

But most impressive is the play of Lamar Odom.  The stats may not show it, but Odom has played with a passion and ferocity that I have never seen from him before.  His rebounding is…otherworldly.  Where most other players would give up on a play, he keeps fighting, and his length often wins out over his undersized opponents.  (I mean, he had 15 rebounds in 29 minutes on Tuesday.  That’s just outstanding.)
I see the Lakers taking this series, with the Jazz winning one or two along the way.  And I can see them taking the next series, too, after the bloodbath between the San Antonio Spurs and Phoenix Suns is over.  Knock on wood, but if the goal is the Finals and an eventual repeat, the road is paved with favorable matchups for the Lakers.
But that’s where things get interesting.
If the Cavaliers solidify their play and make it through both Boston and Orlando, I don’t think there’s any way the Lakers can get four wins on them.  They match up very well with the Lakers, throwing big bodies at Pau and Bynum, and playing at a pace much speedier than the Lakers are comfortable with.  And that’s before taking into account Mr. MVP, LeBron James, who can pretty much pencil in a 30-8-8 for each game the rest of the way.

But the Celtics and the Magic, on the other hand, match up very well with Cleveland.  They both force LeBron and Mo Williams into outside shots, a style of play that is much less productive for them, and live with mid-range shots from Antwan Jamison and Anthony Parker.  Plus, both Boston and Orlando can say they’ve beaten the Cavs before, which is a valuable mental advantage that the Lakers can’t boast.
At the end of it all, I see Cleveland taking Boston in seven, Orlando taking Cleveland in six, and the Lakers beating Orlando in six.  Just like last year.
So, Nole…can I honestly make a case for the Lakers?  Looks like it.