A caller to a Montreal sports radio show disagreed. His name was Andrew, and he gave the usual lengthy and exaggerated preamble that was intended to convey credibility. Andrew had played hockey for years, even a little goal, and perhaps did one term as the Pope. (Sorry, I stopped paying close attention to his introduction.)

"I'm fed up with Price," said Andrew, "He was totally out of position [on Tim Connolly's goal]."

Unfortunately, Andrew had failed to notice that the Sabres had a six-on-four advantage at the time.

Any knowledgeable hockey fan would surely recognize that Price played an outstanding game. But this is Montreal, where reason often takes a winter vacation.

And it not only happens with fans that sometimes let their passions get in the way of hockey sense. It even occurs with so-called professionals. 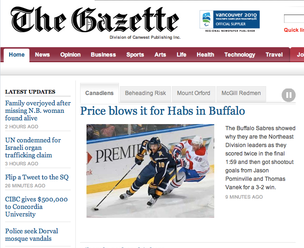 Shortly after the game, a headline appeared in the online version of the Montreal Gazette that read, "Price blows it for Habs in Buffalo." It was attached to a game report by Pat Hickey.

Responses from online commenters and the Twitterverse were swift and deservedly critical. Fans were outraged that the headline was written so recklessly.

Through the intervention of Dave Stubbs, the headline was quickly changed. It read, "Habs blow 2-0 lead late in Buffalo."

Later in the evening, it was changed one more time to, "Canadiens lose shootout in Buffalo." However, the language in the link remains.

The Gazette blamed an unnamed web editor for the original error, citing workload and deadlines. It could happen to anyone, they said.

While we all make mistakes, few of us work for an English daily newspaper in the No. 1 hockey-rabid city in the world. And was this mistake as innocent as claimed?

I can understand that an overtaxed web editor may make a typo, may misidentify a player, or most likely, may write a very boring, generic headline. Yet this person, who clearly hadn't read Hickey's article nor watched the game, was making a bold statement. He/she (incorrectly) placed the blame for the loss on Carey Price.

When a web editor looks way up the pecking order and sees three anti-Price writers like Hickey, Todd, and Fisher, perhaps an assumption was made.

It is truly unfortunate that some have such a jaundiced view of a player with the talent of Price.

Oh, and that fellow Scott with a contrary opinion on Price, from the first line of this piece? His last name is Bowman, winner of nine Stanley Cups and a record 1,244 regular season games.