Trump tweeted on July 21 he would stop watching any sport if players took a knee during the national anthem.

Both the Jazz and Pelicans took a knee to protest systemic racism and police brutality during the national anthem before their game, and Redick offered this response to Yahoo Sports' Chris Haynes when asked if he was concerned about Trump not watching the NBA as a result:

Every player, coach and ref takes a knee during the national anthem before the Pelicans-Jazz game https://t.co/LZy1A6s8VM

Trump has repeatedly attacked players and coaches in the NFL and NBA during his presidency. He famously withdrew an invitation to the White House in Sept. 2017 for the Golden State Warriors after two-time NBA MVP Stephen Curry said he wouldn't visit Washington, D.C., to celebrate the team's championship during the 2016-17 season.

Last October, Trump called Warriors head coach Steve Kerr a "little boy" and accused San Antonio Spurs head coach Gregg Popovich of "pandering to China" when they were asked about the situation between the NBA and China in the aftermath of Daryl Morey's tweet supporting the pro-democracy protests that were happening in Hong Kong.

The NBA is using the restart of its season to further the message of supporting an end to police brutality and systemic racism in the aftermath of the killings of George Floyd, Breonna Taylor and other Black men and women by police officers.

Even though the league has an official rule requiring players and coaches stand for the anthem, commissioner Adam Silver said in a statement no one would be subject to discipline for taking a knee.

"I respect our teams' unified act of peaceful protest for social justice and under these unique circumstances will not enforce our long-standing rule requiring standing during the playing of our national anthem," the statement read.

Players were given the right to wear an NBA-approved social justice message on the backs of their jerseys for the remainder of the season. The NBA also added "Black Lives Matter" to the courts in Orlando. 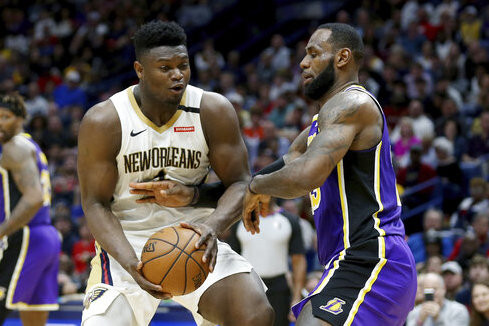