The 2019-20 NBA championship isn't the only thing players are chasing inside the Orlando-based bubble.

Several are playing out the remainder of their contracts and therefore auditioning for their next ones.

While most teams with cap space aren't in proximity to championship contention and will likely focus their offseason on adding youth, win-now teams with money to spend have no shortage of intriguing veterans to target. We'll spotlight three of the best seasoned pros on the market.

Maybe Gasol isn't the All-Star he once was, but the Raptors arguably wouldn't have won the 2019 title without him. That may sound hyperbolic for someone who averaged just 9.1 points and 6.6 rebounds after his trade to Toronto, but the eye test saw his impact—as a screen-setter, rapid ball-mover, floor-spacer and defensive anchor—as immense.

Despite having to work around a balky hamstring, he remains the same sneaky-important court presence. His individual numbers aren't great (7.6 points and 6.3 boards), but his net differential is among the widest on the team (plus-10.4 with him, plus-4.1 without).

His communication remains invaluable along the back line of a defense, while his growth as a shooter and passer has extended his shelf life on offense. He looks too important to Toronto to imagine him playing elsewhere next season, even if the Raptors are forced to choose between him and fellow free agent big man, Serge Ibaka. 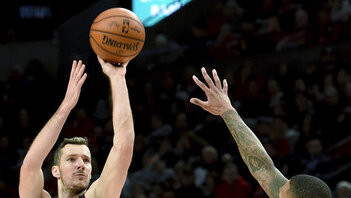 For Dragic, that meant giving up the starting spot he had earned—just two seasons removed from his first-ever All-Star appearance—and starting over as a quick-strike reserve for his age-33 season. He has handled the adjustment with aplomb.

The reserve role feels like a career-extender for Dragic, who struggled during an injury-riddled 2018-19 campaign and now figures to collect some Sixth Man of the Year voting support in 2019-20.

His 20.4 points per 36 minutes are the third-most he's ever averaged, and he's never been more effective as a shooter. He's splashing a career-best 2.2 triples per night at a 37.7 percent clip and also converting 38.5 percent of his pull-up threes.

Dragic looks so good that it isn't difficult to imagine him running it back with the Heat. But as one of the only win-now clubs with money, they might prioritize other players (like Danilo Gallinari) first. If that squeezes him out of South Beach, Dragic could find a new home in Dallas, backing up fellow Slovenian Luka Doncic.

Portland signed Whiteside to be a placeholder while Jusuf Nurkic worked his way back from a broken leg. It's important to remember that, because it probably dictates Whiteside's direction in free agency.

The Blazers must be thrilled with what they've received from the 7-footer. He's averaging a league-leading 3.1 blocks to go along with 16.3 points and 14.2 rebounds per night. If those numbers sound impressive, that's because they are. Only four players have previously posted 16/14/3 stat lines, and all of them share a home in the Hall of Fame.

That doesn't mean Whiteside is suddenly a superstar, but it highlights how well he executed his role.

Someone will take notice, even if that team isn't Portland. With Nurkic and Zach Collins on the mend, the Blazers can't justify giving Whiteside more than minimal money. He should find that from an external suitor, perhaps the Charlotte Hornets, who have an opening at center and might enjoy filling it with the North Carolina native.