Los Angeles Lakers superstar LeBron James said Saturday he will wear his name on his jersey rather than a social justice message when the 2019-20 NBA season resumes in Orlando, Florida, later this month.

Players have been given permission to pick from a list of preapproved phrases related to social issues and wear them on their jersey during the restart, but James told reporters: "It was just something that didn't really seriously resonate with my mission."

Per Tania Ganguli of the Los Angeles Times, LeBron said he would've liked to have had some say in the phrases that were approved but is "OK" with the fact that he wasn't. James also added: "I respect everybody that decided to put something on the back of their jersey."

Players are returning to action at a rare time—a situation not only caused by the coronavirus pandemic, but also the state of the nation from a social standpoint.

Since the killing of 46-year-old Black man George Floyd at the hands of police in Minneapolis on May 25, protests against social injustice, racial inequality and police brutality have taken place across the United States. James is one of many prominent NBA players who have spoken out against racism in America.

While players will be stuck in the "NBA bubble" in Florida for as long as their teams are in contention, wearing social justice phrases on their jerseys is one way they can continue to push for change.

James also said Saturday that he never considered sitting out the resumption of the 2019-20 NBA season. According to Tim Reynolds of the Associated Press, James noted he always intended to continue playing "this beautiful game" whenever the NBA gave the green light.

Per Ryan Ward of Clutch Points, James added: "I'm here for one goal and one goal only, and that's to win a championship."

The season was suspended March 11, but the 22 teams that are part of the restart have gathered inside the NBA bubble in Orlando, and play will officially resume July 30.

James and the Lakers will be part of one of the first games back, as they will clash with the rival Los Angeles Clippers in a prime-time contest July 30.

LeBron and the Lakers are one of the top title contenders, as they are the No. 1 seed in the Western Conference at 49-14. Since they have a 5.5-game lead over the second-place Clippers and each of the 22 remaining teams will only play eight regular-season games before the playoffs, the Lakers are likely to clinch the top seed.

They will play postseason basketball for the first time 2013, and with the dynamic duo of James and Anthony Davis leading the way, they have a legitimate chance to win their first title since 2010 as well. 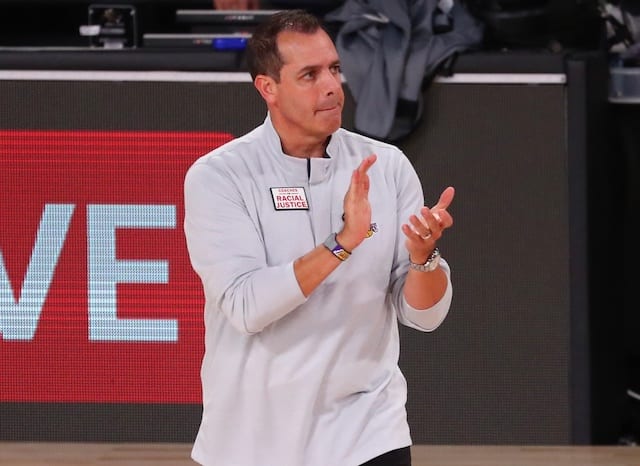