Brooklyn Nets point guard Spencer Dinwiddie has tested positive for COVID-19, and his status for the NBA's planned restart in Lake Buena Vista, Florida is unclear at this time.

Dinwiddie spoke with Shams Charania of The Athletic:

"Over the past few months, I have been diligent about protecting myself and others from COVID-19 by following all designated protocol and quarantining. I was ready and prepared to rejoin my teammates as we were to be an early entry team in the resumed season. I flew private to return to New York, passed multiple COVID-19 tests over my first several days in New York and was able to participate in a couple practices within the first week.

"Originally, we were supposed to be one of the teams to enter into the Orlando bubble early, but training camp got switched back to New York and unfortunately I am now positive. Given that I have experienced symptoms, including fever and chest tightness, it is unclear on whether or not I'll be able to participate in Orlando.

Dinwiddie told Charania that he will self-isolate and re-evaluate following a 14-day period. He later took to social media to further explain the situation: 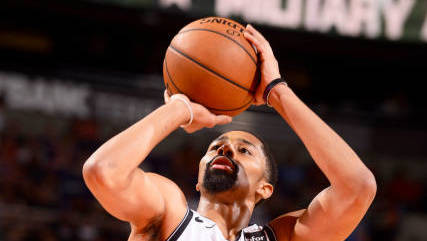 Just to be clear I haven’t opted out and want to play like I told @ShamsCharania. Unfortunately I have been one of the cases that has various symptoms. https://t.co/sgr7s3eQZx

The Nets and 21 other NBA teams will take part in the league's planned restart, which is scheduled to begin July 30 at ESPN's Wide World of Sports Complex within Walt Disney World. Brooklyn's first game will be against the Orlando Magic on July 31.

Losing Dinwiddie would be a tremendous blow to a Nets team already without six-time All-Star Kyrie Irving, who is out for the season following right shoulder surgery in March.

Dinwiddie has been an instrumental part of the Nets' success this season, especially with Irving missing 44 games because of injury. He's averaged 20.6 points and 6.8 assists per game, both of which are career-highs. The ex-Detroit Piston is the team's primary scorer when Irving is off the court.

Without Dinwiddie, the Nets would presumably look toward Chris Chiozza to help fill the gap at point guard. Caris LeVert and Garrett Temple could also bring up the ball.

LeVert in particular would be relied upon more for his scoring efforts. He's averaged 17.7 points per game and knocked down 38.1 percent of his three-pointers. Expect more usage out of Temple, Joe Harris and Taurean Prince at the guard and wing spots.

The Nets are already shorthanded heading into Florida sans forward Wilson Chandler, who has opted to sit out the restart for family reasons, per his comments to ESPN's Malika Andrews.

Dinwiddie is the fifth Net to test positive for COVID-19 per reports. Per ESPN, four Nets tested positive in March, including forward Kevin Durant, who is out for the year with a ruptured Achilles suffered during the 2019 NBA Finals while he was a member of the Golden State Warriors.