10. Greg Oden —I struggled with the placement of Oden. Many people will disagree with him being on the list, I'm sure. Statistically, he looks pretty average. However, he is fourth among centers in PER. When he is on the court, he looks very good this year, dominant at times. Physically, few can match his combination of strength and athleticism. He has a better rebounding rate than any other player on this list, and he is fourth in the league in blocked shots while only playing 23 minutes per game.

Honestly, his only issues are fouls. Should he get knocked for that? Yes, that is why he barely cracked the top ten. But, Oden's improvement over his rookie season is obvious, he is slowly learning how not to foul and quickly realizing that he has the ability to physically dominate most centers.

His impact is clear, last season the Blazers gave up something ridiculous like ten more points per game in games that Oden did NOT play. The best part is that he's only 21 and still has so much room for improvement. Expect big things in the years to come.

9. Marc Gasol —The play of the "other" Gasol has made the so-called "worst trade in NBA history" look a little bit better. The draft pick used by the Grizzlies to get Marc Gasol was acquired from the Lakers in the Pau Gasol trade. Gasol has been a pleasant surprise for the Grizzlies, giving them a bruiser inside to compliment Zach Randolph and the young perimeter players.

He's got a very nice touch around the basket and display's some pretty impressive footwork. This season, he's visibly lighter which should help him defend and run the court better.

8. Nene Hilario —Hilario has always been underrated in Denver. The strong "personalities" of his teammates (or their tattoos and felony charges) have always overshadowed how good he really is.

Last year, he was finally consistently healthy for the first time in his career, and he was vital in helping Denver reach the conference finals and nearly knock off the Lake Show. He is brutal in the post, combining strength and power with a pretty nice touch.

7. Chris Kaman —I don't think there's a player in the league as good as Chris Kaman that goes more unnoticed. That's the price you pay when you wear the legendary red and blue jersey.

Kaman is a legit 7-footer, and he's putting up 22 and nine this year along with a couple blocks a game. I'm not really sure how he does it. Does anyone look like less of a basketball player than Kaman does? OK, maybe Matt Bonner and Brian Scalibrini, but either way Kaman gets it done on both ends. Non-props to him for playing on Germany's national team in the Olympics, what's up with that?

6. Andrew Bynum —I hate that he's on this list, but the way he's started this season I have to put him here. He's started very strong for the Fakers, taking advantage of extra touches in the absence of Pau Gasol. He has true center size and monkey arms to go along with a real nice jump hook. He's been extremely inconsistent through his short career, and despite the perception, he's probably more injury prone than Greg Oden. However, if he stays healthy and continues to improve, he should keep LA right behind Portland in the West for years to come.

5. Shaquille O'Neal —The Diesel is just about on his last fumes, but still has a significant impact on the league due to his sheer size and intelligence.

It always bothered me that many people didn't realize how skilled Shaq was back in his heyday. He wasn't just bigger than everyone. He had, and still has, amazing footwork. He was also way more athletic than anyone his size should ever be, and that is what he has lost the most. He's just as strong as he always has been, he just doesn't have the lift and the quickness with his feet that he used to. He still commands a double team whenever he touches the ball, which is something that many people don't understand the value of. He won't score nearly as much, but he understands his limits now and is, in my opinion, the best passing center in the NBA (something else he's never gotten credit for).

Defensively, he has become somewhat of a liability on pick and rolls, but his size in the middle still makes it hard for opponents to score in the paint. It's hard for people to see Shaq's worth today because he will always be compared to what he used to be—now, his age has simply leveled the playing field for other centers, and brought Shaq back to their level.

4. Al Jefferson —Before his knee injury last year, Al Jefferson was straight dominant. Part of it is because he is on a bad team, but you still have to be very good to put up the numbers that he has.

He has started a little bit slow this year, which is probably in large part due to the new triangle offense being implemented. I expect him to be back to his old ways with time, and when Kevin Love gets back in the mix it will be a great help. Jefferson has nice low-post moves and a knack for rebounding.

He's a load to handle down low, but he must improve defensively and with his ability to pass the ball to open teammates when he draws a double team. If he can improve his all-around game, the sky's the limit for how good he can be.

3. Brook Lopez —Man, I never thought this guy would be this good. His game has translated amazingly to the NBA level in every facet. As surprisingly good as he was last year, he has been even better this year, improving in most statistical categories already. He can score both in the post and from mid-range, he rebounds well, he blocks shots, shoots well from the foul line, and he's extremely intelligent. What more could you want from a center? In a league with few true big-men, Lopez should be a nightmare to opposing teams for a long time. 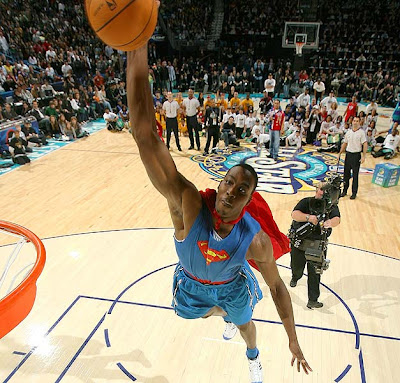 2. Dwight Howard —Superman! He's widely considered the best center in the league, and it's hard to argue against it (even though I will). I'm not sure we've seen a big man since Wilt Chamberlain that has the unbelievable athleticism that Howard possesses. This gift alone makes him dominate in the league.

However, Howard is only second on my list because I believe that his athleticism is all that he has. He has no touch around the basket, no post moves, no ability to shoot outside of five feet, ect. Still, it's absolutely amazing that a big man could possess so little basketball skill and still be so dominant.

But, until he develops some sort of post game, I cannot consider him the best center in the league. Right now, Howard could never play as long as Shaq has, because once his athleticism starts to dwindle, he will have nothing. That being said, he's still young and I expect him to keep developing in the post as his career goes on. He has to.

1. Yao Ming —I know, I know, Yao might not even play this year. Fortunately this list is anything but official, so I can include him if I so choose. I don't believe there is a big-man in the game today that requires more game-planning from the opposing team than Yao Ming. Not only is he about a half-foot taller than anyone who is going to guard him, but he is extremely skilled. How do you stop a 10-foot fadeaway from someone who's 7-6 and has a high release? You don't, you just have to hope he misses. Yao is a great shooter out to 15 feet, which is so rare for someone of his size.

I feel terrible for him that he is having so many foot problems. He may never stay healthy, which is a shame, because he is flat-out a great player and the most skilled center we have. Get healthy, Yao, the NBA needs you!