The Los Angeles Lakers won their ninth straight game and 16th in 17 tries thanks to a 114-110 road victory over the New Orleans Pelicans at Smoothie King Center on Wednesday.

Davis was simply exceptional in his return, dropping 41 points on 15-of-30 shooting and collecting nine rebounds.

His most important play came on the defensive end, though. New Orleans inbounded the ball down 112-110 with 5.3 seconds left, but Davis intercepted Pels guard Jrue Holiday's pass and was immediately fouled. The big man then knocked down two free throws to seal the win.

Pels guard Josh Hart hit a free throw to cut the lead to 111-110, and New Orleans had a chance to take the lead down the stretch before the failed inbounds pass.

However, a JJ Redick baseline jumper with six seconds left was off. Davis hit one free throw on the other end, leading to the final sequence. 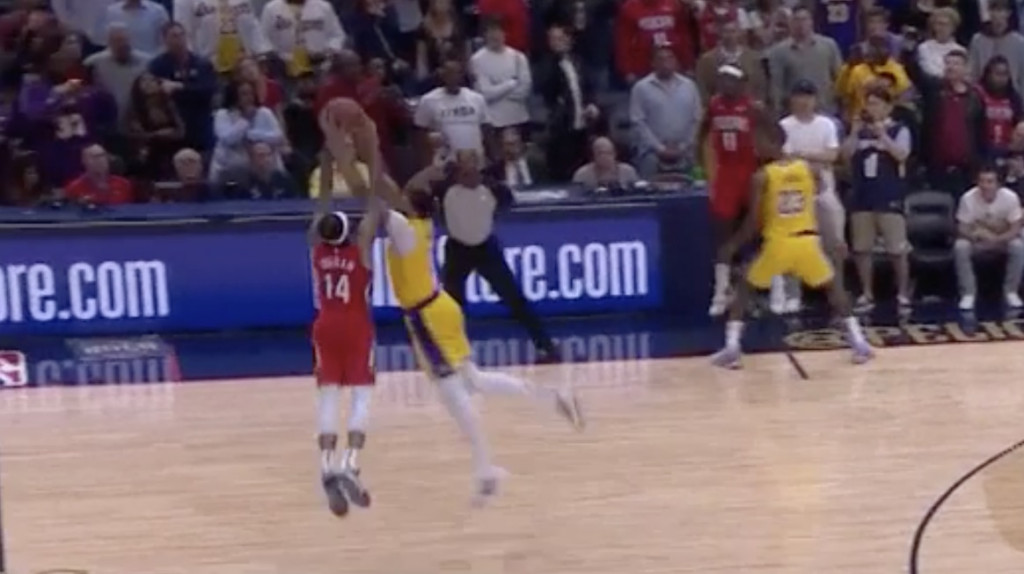 LeBron James scored 15 of his 29 points in the fourth quarter and surpassed 33,000 for his career. He's currently fourth on the all-time scoring list.

Congrats to @KingJames of the @Lakers for becoming the 4th player in @NBAHistory to surpass 33,000 career points! #LakeShow https://t.co/Ad7cAymltM

The 16-2 Lakers still own the NBA's best record. The 6-12 Pels lost their third straight.

Davis did not receive a warm welcome upon his return to New Orleans.

The boos were loud and long during his introduction.

Furthermore, ESPN's Andrew Lopez reported that the Pels did not make a tribute video.

Neither of these things fazed the Brow in his best game as a Laker.

The three-time All-NBA team member was given the ball early and often en route to a 15-of-30 shooting night. Los Angeles clearly made an attempt to feed the big man against the smaller Pelicans frontcourt, and Davis responded by dominating the paint.

Sometimes, it came on the fast break (with a healthy cascade of boos):

Brow getting all the boos in NOLA (via @NBATV) https://t.co/iOKl1ogEbm

On other occasions, Davis camped out in the post, backed down a hapless defender and converted for two:

Regardless of where Davis did work, the Lakers needed all of his production on a night where L.A. struggled on both ends through three quarters.

New Orleans was up 38-25 after 12 minutes and took 10-point leads after halftime and the third quarter, and that was with Davis scoring 36 points entering the final frame.

However, Davis suffered a right elbow injury following a collision with Pels guard Josh Hart, leaving his status in doubt:

Josh Hart ran into Anthony Davis just before the 3rd Q buzzer, and stayed on the ground for a few seconds before getting to his feet holding his right arm/elbow. Training staff is working on it on the bench.

Davis returned with 7:41 left in the fourth quarter, though, with his team down 95-91. He quickly threw down an alley-oop dunk from LeBron James, who led the Lakers to the finish line with 15 points in the final frame.

Davis was the hero down the stretch with a timely steal and free throws, and now the Lakers are 16-2 and looking near-invincible.

It's easy to forget about anything else that happened on a night where Davis was the focus of the pregame, midgame and postgame storylines, but New Orleans Pelicans guard Jrue Holiday was simply phenomenal.

A 29-point, 12-assist, six-rebound effort propelled the Pels to a near-upset win on a night where leading scorer Brandon Ingram struggled to a 4-of-21 performance.

He dropped 15 points and five assists in the first quarter alone to give New Orleans a 13-point advantage:

And he went toe-to-toe in the first half with Davis to give New Orleans a 10-point halftime lead:

Holiday played lockdown defense, too, and Lopez provided this ESPN Stats & Info note during the second half:

Per @ESPNStatsInfo: Jrue Holiday now holding the Lakers to 1-of-8 shooting as the primary defender, including 0-of-4 from Anthony Davis.

His biggest defensive moment occurred in the final minute, when James was backing the guard down in the post. Undeterred, the smaller Holiday stripped the ball with 20.2 seconds left to give the Pels a chance to take the lead at the other end.

The guard scored just four points in the second half, and his turnover in the final seconds proved to be the final blow for the Pels' victory chances.

However, New Orleans isn't in position to take down the NBA's best team without one of the NBA's better individual performances in one half given the production and opponent (the Lakers entered the night first in defensive efficiency, per ESPN).

He and Davis, who were teammates for six years, exchanged jerseys postgame:

"It's a brotherhood. It's bigger than basketball." —Anthony Davis on exchanging jerseys with Jrue Holiday postgame 🤝 https://t.co/UTiPIeKKVk

The Lakers might coast to the West's No. 1 seed, while the Pels might be hard-pressed just to make the playoffs. However, a Lakers-Pels first-round postseason matchup isn't out of the question, especially if Holiday has more nights like these and New Orleans finally returns to full strength.

Both teams will play on Friday.

The Pelicans will visit the Oklahoma City Thunder at 8 p.m. ET in Chesapeake Energy Arena. The Lakers will return home to host the Washington Wizards at 10:30 p.m. in Staples Center.