The Milwaukee Bucks won their eighth game in a row, defeating the Utah Jazz 122-118 on Monday night at Fiserv Forum in Milwaukee.

Giannis Antetokounmpo (50 points, 14 rebounds) continued his streak of double-doubles to open the 2019-20 campaign.

The @Bucks Giannis Antetokounmpo is just the second player since the ABA-NBA merger to record a double-double in each of his first 17 games of a season. The other player to do so is Bill Walton in 1976-77.

A Bojan Bogdanovic three-pointer brought the Jazz to within four, and Donovan Mitchell made it a two-point game, 120-118, with 43.8 seconds remaining.

Rather than calling a timeout after Bogdanovic collected an Eric Bledsoe miss with 19.3 seconds left, Jazz head coach Quin Snyder let his team go. Mitchell drove to the basket, but Brook Lopez blocked his attempted layup.

The season series between the two teams winds up as a draw after the Bucks avenged their 103-100 defeat in Utah on Nov. 8.

The matchup pitted two of the top teams in defensive rating against one another. The Jazz were first (101.4) and the Bucks tied for second (102.1) entering the night, per NBA.com.

Utah and Milwaukee shot 50.6 and 44.3 percent, respectively, from the field. 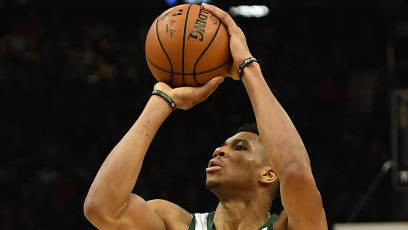 The Bucks trailed 57-48 at halftime, and Giannis wasn't getting a ton of help from his supporting cast. When the second half began, the reigning MVP decided to do it on his own.

Antetokounmpo posted 18 points in the third quarter as Milwaukee outscored Utah 42-26. He closed out the quarter by finding Pat Connaughton in the corner for a three-pointer that put the Bucks ahead 90-83.

Giannis netted 18 points in the 3rd QTR. 🔥 He has 36 points and counting entering the final frame. #FearTheDeer https://t.co/yLbenZ18B4

When it comes to Giannis' quest for a second straight MVP, Monday's game will likely be only a footnote—if it's remembered at all by the end of the season. But his performance was as strong an example as you can find to demonstrate why he's still among the NBA's most valuable players.

I enjoyed Giannis' "Rookie of the Year" sequel very much tonight. I can't wait til we sign Gary Busey.

Giannis just dropped 50 points shooting 17-31 from the field 3-8 from 3 and 14 rebounds 6 assist against an elite defensive Utah Jazz team with the Win!!!! @TheRyanHollins you sure you wanna keep up this debate with me? Once again my Top 3 Bron, Giannis and Luka!!!

The Bucks were 6-0 since Khris Middleton suffered a thigh contusion in a 121-119 win over the Oklahoma City Thunder. Milwaukee was clearly getting by for the time being without its best secondary scorer.

But this was the first time the Bucks have faced off with one of the NBA's elite defenses without Middleton in the lineup. He had 26 points in that earlier matchup against the Jazz, and that scoring output would surely be difficult to replace.

In short, somebody needed to step up and help Antetokounmpo, and Wesley Matthews answered the call.

Matthews finished with 19 points and shot 5-of-8 on three-pointers, with the bulk of his offensive output coming in the third.

Giannis can't single-handedly carry the Bucks in the postseason. A role player such as Matthews getting hot—even if only for a quarter or two at a time—will be vital by the summer.

You look at the box score and wonder how the Jazz lost this game.

They made more than half their shots and were 21-of-45 from beyond the arc. Six players scored in double figures, with the bench combining to pour in 51 points.

Rudy Gobert's absence loomed large, as well, because Giannis had a much clearer path to the basket without the 7'1" Frenchman inside.

Depending on your opinion, the notion of a moral victory is either a dumb construct or a genuine way to describe a team's work in a losing effort. If you fall into the latter group, this was a moral victory for the Jazz.

Over half of the Jazz' field-goal attempts were threes. They shot 46.7% from three. They lost. Giannis Antetokounmpo is a nightmare.

Tough loss for the Jazz tonight, but by no means a bad one. It took a monstrous 50 from Giannis to get Milwaukee over, and no Gobert was always going to make things difficult. Liked several areas of Utah's effort.

The story is Giannis, but Utah looked pretty good tonight. Things are coming together for them.

Mike Conley had a night to forget, though, shooting 2-of-10 en route to a six-point outing. He dished out a game-high nine assists, but Utah was minus-nine with him on the floor, the lowest plus-minus among the team's starters.

Pretty rough game for Conley. He's not making his shots and has lost on several defensive rebounds, including that last one for a putback to put the Jazz down 5.

The move to get Conley made sense for the Jazz. The franchise isn't a destination for marquee free agents, and adding a veteran point guard who can create his own shot eases some of the scoring burden on Mitchell.

So far, Conley isn't meeting expectations in that regard. Perhaps it's merely the growing pains that come with adjusting to a new offense and an entirely new franchise after 12 years with the Memphis Grizzlies.

But Monday night underscored how the Jazz could once again run into trouble in a playoff series that pits the team against one of the NBA's best players unless Conley starts looking like his usual self.

The Bucks welcome the Atlanta Hawks on Wednesday. The Jazz move to the second leg of their five-game road trip Wednesday when they take on the Indiana Pacers.