James Harden dropped 36 points on 10-of-23 shooting to lead the Houston Rockets to a 129-112 victory over the visiting Golden State Warriors on Wednesday at the Toyota Center.

The Warriors held a 46-42 lead with 4:44 left in the second quarter, but the Rockets went into halftime on a 21-6 run to maintain a 63-52 halftime edge. They never led by fewer than nine in the second half.

The 5-3 Rockets, who have won two straight, hit 21 three-pointers and shot 49.5 percent from the field overall.

Russell has missed three straight games with an ankle injury. Green has sat three contests with a finger injury and is slated to miss two more. Curry will be out until February with a broken left hand suffered in Golden State's Oct. 30 loss to the Phoenix Suns. 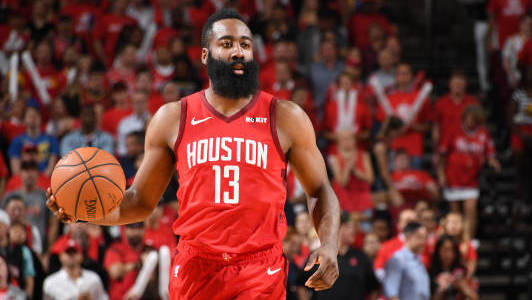 Harden had just six points on 2-of-9 shooting with 4:44 remaining in the first half. Golden State surprisingly held the momentum at that point, and the game looked as though it would be much closer than the pregame 16-point spread indicated.

But Harden had other ideas.

The 2017-18 NBA MVP posted 18 points and two assists in a 5:24 span, turning a four-point deficit into an 11-point halftime lead. He nailed his patented step-back three-pointer four times, single-handedly erasing any momentum the Warriors grabbed until that point.

Harden even broke out a Eurostep for good measure:

When he wasn't knocking down shots, he was finding his teammates for easy buckets, like these two from Clint Capela and Russell Westbrook:

You can use a host of nouns and adjectives to describe Harden on Wednesday, but an inaccurate one is "food," which Warriors big man Eric Paschall called The Beard in a second-quarter remark to the Golden State bench:

Eric Paschall to the Warriors bench after that and-1 on James Harden: "He's food."

Paschall looks like the real deal in his own right (19 points, six rebounds), but Harden ended up scoring more points in the second quarter than any other Warrior not named Alec Burks did for the entire game:

James Harden scored 20 points in the second quarter. Warriors’ rook probably bit off more than he can chew. https://t.co/q32HMcfW1m

Ultimately, the Rockets largely coasted to a win against a short-handed Warriors team because Harden was entirely too much to handle.

Of course, Warriors head coach Steve Kerr knew that could be the case going in:

But that's the scenario every opponent faces on a nightly basis against Harden. The 11th-year pro may start slow and do next to nothing for close to a half, but there's arguably no one better (outside Los Angeles Lakers guard/forward LeBron James) at assuming command of an entire game at a moment's notice like him.

There usually isn't a lot of good to take away from a losing NBA team on the wrong end of a 17-point blowout on most nights, but the result was to be expected given how short-handed Golden State is right now.

Still, the Warriors have a few positive postgame takeaways, led by Burks dropping 28 points on 10-of-18 shooting off the bench.

Burks spent his first seven-plus NBA seasons with the Utah Jazz but has bounced around the league since, suiting up for the Cleveland Cavaliers, Sacramento Kings and Warriors.

But he may have a found a longer-term home in San Francisco, as the No. 12 pick in the 2011 draft showed just how much of an asset he can be off the bench.

Of course, with the way the Warriors' season is going, he may find himself on the trading block come winter, as Dieter Kurtenbach of the Bay Area News Group noted:

The young guys are playing well, but there’s value in the Warriors giving the vets run. Alec Burks is an interesting case study, in particular — can he play his way onto a contender this season? (And can the Warriors land a real draft pick for him?)

However, Burks has now impressed in two straight games, having scored 13 along with four rebounds in a 127-118 win over the Portland Trail Blazers on Monday.

Elsewhere, Paschall looks like a second-round steal after the Warriors took him 41st overall in the 2019 draft. The forward out of Villanova has averaged 26 points in his last three games, which includes a 34-point effort against Portland.

He showed out with the double-pump slam Wednesday:

And he also knocked down a couple of threes. After missing his first eight to start the season, the ex-Wildcat has hit 6-of-10.

Paschall figures to be part of the Warriors' future given his early start plus a very friendly contract, as Anthony Slater of The Athletic showed:

And that's great news for the Warriors once Curry, Green and Klay Thompson are all on the court together once again.

Golden State will continue its three-game road trip against the Minnesota Timberwolves on Friday at 8 p.m. ET. Houston will visit the Chicago Bulls on Saturday at 8 p.m.