Wales manager and Manchester United icon Ryan Giggs has called on Premier League referees to be more protective of Daniel James after the Red Devils starlet was booked for diving on Monday.

James was making his first competitive start for United in the clash with Wolverhampton Wanderers, playing for 89 minutes in a 1-1 draw at Molineux.

The Welshman's night was blemished by a yellow card dished out by referee Jon Moss for diving. Speaking about the incident, Giggs defended the 21-year-old and said it won't take much for a player of his speed to be knocked off balance, per the Press Association (h/t Sky Sports):

"You've seen he gets kicked a lot. Sometimes when you anticipate it, it can look like a dive. The speed he's going at, it can look worse, but I'm not worried about that. He gets a lot of stick and referees need to protect him.

"I watched a lot of the pre-season games and he did well as he usually plays on the left. It gives me a different option as well if he's playing his club football on the right. If I want to do that, I can."

Per Simon Stone of BBC Sport, United manager Ole Gunnar Solskjaer shared a similar opinion to Giggs on the incident in question:

OGS on Daniel James 'dive': "He gets kicked so many times. I have not seen it other than live. How many times did they go through him. I have no problem that sometimes he avoids being kicked."

James was the only major attacking signing made by United in the summer transfer window, having arrived from Swansea City after an excellent breakthrough season.

BBC Match of the Day shared this stunning goal he netted for the Welsh outfit last term:

Here's what Man Utd will be getting for their money from Daniel James 🏃‍♂️💨💨💨 #MUFC #SWANS https://t.co/LUGToIPrZ6

The youngster's career has got off to a brilliant start at Old Trafford, with a debut goal in their 4-0 win over Chelsea. James' blistering pace, balance and work ethic will give the Red Devils a different type of attacking threat this term.

On Monday, James was on the end of some hostility from the Wolves fans. Per Tim Spiers of the Express & Star, the home supporters were unhappy with James prior to that incident because they believed he had gone down too easily in another tangle:

Daniel James was being booed for an apparent dive anyway, but he's gonna get the full big bird now. Booked for diving as he falls to the floor by Moutinho.

For James, playing in the Premier League will require a period of transition. Given how quick he is, canny defenders will do what they can to knock him off balance before he can get into his stride, meaning some physical treatment may come his way over the course of the campaign.

It appears he will have to learn how to deal with that quickly given how often the Red Devils look set to use the winger. They have already sold Romelu Lukaku to Inter Milan this summer, while Alexis Sanchez is reportedly a target for the Serie A side too.

Zidane: It's Not Zidane Against Guardiola

Zidane: It's Not Zidane Against Guardiola 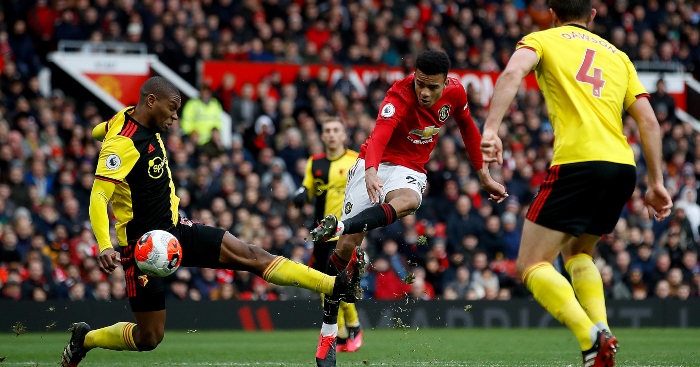