LOS ANGELES — Beyond the emotions of the moment itself—the moment where the NBA watched one of its premier players fall to an Achilles injury in his Finals comeback attempt—Kevin Durant's road to recovery will have real implications on the league this summer.

It was widely assumed that Durant would opt out of the final year of his contract (at $31.5 million) to explore free agency. Just the possibility of Durant was enough for teams to open enough cap space to make a run at arguably the best player in basketball.

But we're in uncharted territory now, and the ripples of Durant's injury will be far-reaching.

How Far Will Warriors Go Into the Tax with an Injured Durant?

If Durant opts in and the Warriors re-sign Klay Thompson at his maximum salary of roughly $32.7 million, Golden State would have at least $140 million invested in just five players (Stephen Curry, Draymond Green, Andre Iguodala, Durant and Thompson). That's the core of the current NBA dynasty, but the luxury tax threshold projects to be $132 million next season and the Warriors are a repeat tax offender. 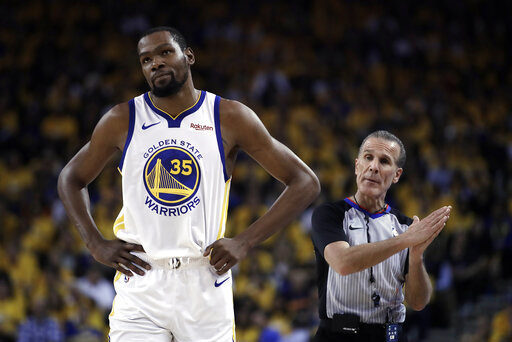 Once the team fills out a full roster, it'll probably be near $165 million to $170 million in salary with a tax penalty from $132 million to $163 million. The Warriors will probably pay out over $300 million in total for a team that may not have Kevin Durant for most or all of the season. The rules permit them to spend at that level; they're not limited by a hard salary cap.

The Warriors would have another year to decide on how long they can keep their core together, with Green, Iguodala and Durant both up for contracts next summer. But there's no specific reason Golden State cannot keep paying a massive payroll—as long as it is willing.

What Does This Mean for Kyrie Irving's Suitors?

The Boston point guard was widely rumored to try to team up with Durant, possibly with the New York Knicks or Brooklyn Nets. Both teams made moves over the past year to open enough cap room to afford both.

Now with Durant's injury, will Irving consider staying with the Celtics? Will he look instead to reunite with LeBron James in Los Angeles with the Lakers?

Would Irving be happy joining forces with one of the next tier of available stars like Jimmy Butler? Or could Irving follow Anthony Davis, assuming the New Orleans Pelicans finally move the All-Star forward?

Regardless of Durant, keep an eye on the Nets, who could have a high-scoring backcourt of D'Angelo Russell and Irving—or possibly Davis and Irving.

Do the Los Angeles Clippers Have a Better Shot at Klay Thompson?

The Clippers came into the summer with dreams of landing Kawhi Leonard and Durant. Now, Leonard may be on the verge of an NBA title with the Toronto Raptors (to be determined), which could lead him to re-sign instead of returning home.

Los Angeles overachieved in 2018-19 and would like to make a jump into contention. Technically the team won't have two max slots unless it deals or waives and stretches Danilo Gallinari. Without Durant (and Leonard), the Clippers can hope that Thompson defects from the Warriors (unlikely) or chase a next-tier star like Butler. Perhaps they'll look to ink a starting center like Nikola Vucevic or target shooting in Khris Middleton.

Or the Clippers could just bide their time and wait a year for the 2020 free-agent class, perhaps with a revisited run at Durant.

Another option would be an increased effort to trade for Davis, but that would probably need to include Shai Gilgeous-Alexander, who the team prefers to keep. That said, if he's the difference in the Clippers hitting big this summer or waiting a full year to make a bigger step, the young point guard could be a casualty.

Without Durant, the Knicks may not be able to land Irving. If they can't land Davis, they may find they're boxed out on the top names. Would they turn next to Kemba Walker, Tobias Harris, Butler and the like?

Kristaps Porzingis was unhappy in New York, and as a restricted free agent he was determined to move on from the organization. The February trade with the Dallas Mavericks was somewhat shocking, but with Durant potentially staying with the Warriors, the Porzingis deal may need some time to pay dividends.

That said, historically, if there's a team to over-invest in an injured player who may not ever be quite the same, it's the Knicks (who did just that with Amar'e Stoudemire). It's almost too obvious, but they'll need Durant to opt out for that to even be an option.

Also, the Knicks have been making better decisions for several years (detractors won't agree), holding onto their first-rounders and not grossly overpaying free agents—outside of Joakim Noah in the summer of 2016 when most of the NBA gave out regrettable contracts.

Do the Los Angeles Lakers Have a Better Shot at Kyrie Irving Now?

If the team can get a deal in principle with New Orleans before the draft, it'd be in position to sign a max player like Irving in July and then execute a trade with the Pelicans for a three-star team with James.

In a disappointing end to the NBA season, Durant's injury will have a major impact on the summer. Irving and Leonard move to the top of the free-agent list, and teams like the Lakers, Nets, Raptors, Knicks, Clippers and Celtics are all beholden to their decisions.