Coming into 2018-19, they were the top two options for the Eastern Conference's best player. After a ridiculous regular season, Giannis is an MVP finalist. Kawhi sat out 22 games on a highly publicized "load management" program.

But after the Toronto Raptors' 105-99 victory over the Milwaukee Bucks in Game 5, Leonard looks like the East's best player. And he's proving it in a head-to-head matchup against Antetokounmpo.

On Thursday, Kawhi had 35 points, including 22 in the second half and 15 in the fourth quarter. For one stretch spanning across the end of the third and beginning of the fourth, he had 17 of Toronto's 20 points. And he also grabbed seven boards and dished out a playoff-career-high nine assists:

When the Raptors used a 10-0 run to take over the game in the fourth quarter, Kawhi was the catalyst. His back-to-back threes swung momentum firmly in Toronto's direction, and the Raptors held onto it for the rest of the game:

"I'm not afraid of the moment," Leonard told reporters after the game. "I enjoy it." 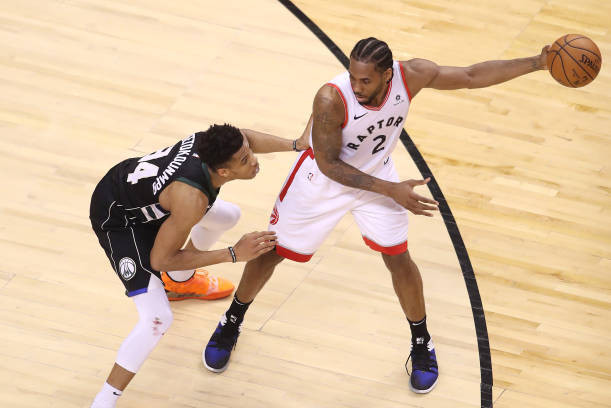 His career numbers certainly back up that assertion.

Game 5 marks the 10th time Kawhi has put up a 30-plus game score in a playoff game, tying him with James Harden for 15th all-time. It's his fourth this postseason alone (and he has two others at 29.7).

It's in the playoffs when we see peak Kawhi. And in this series, his peak has undeniably been higher than Antetokounmpo's.

In the Eastern Conference Finals, Leonard is averaging 30.4 points, 8.0 rebounds, 3.8 assists, 2.2 steals and 2.0 threes, with a 58.9 true shooting percentage. He's dropped at least 30 points in four of the five games. And most importantly, he's locked down Giannis.

After the Raptors went down 2-0, coach Nick Nurse made the decision to put Leonard on Giannis for more individual possessions. In Games 3 and 4, he defended the MVP candidate for 75 possessions. Giannis was 5-of-19 and the Bucks only scored 66 points on those possessions, per NBA.com.

And this isn't new. According to ESPN's Kirk Goldsberry, Leonard has been Giannis' Achilles' heel for a while:

After Leonard sat out most of last season and 22 games in this one, it's possible many forgot how dominant he can be as a perimeter defender. This postseason—and this series specifically—has been a vivid reminder.

The physical dominance Giannis is able to exercise over just about anyone simply isn't there against Kawhi. He's strong enough to absorb the contact, quick enough to stay in front and long enough to recover on the rare occasions he is beat.

When you combine his individual defense with the rest of the Raptors, the results are pretty ridiculous:

filter out garbage time, and the Bucks are now averaging 0.83 points per half-court possession in the Eastern Conference Finals. woooooof. (via @cleantheglass)

Milwaukee has looked helpless on offense for long stretches of this series. The rotations have been crisp, and Giannis has faced multiple defenders on most of his drives. The Bucks' shooters haven't been consistent enough on kick-outs to make the Raptors pay for loading up on those drives.

Make no mistake, Leonard is the tip of the spear for a lot of those defensive stops.

On the other end, he's starting to get some of the help he desperately needed in Games 1 and 2 losses. In Game 3, it was Pascal Siakam and Marc Gasol. In Game 4, it was Kyle Lowry and a handful of bench players.

On Thursday, it was Fred VanVleet, who hit seven threes and was a game-high plus-28. Kawhi assisted on four of those triples:

Now, as the series shifts back to Toronto for a potentially decisive Game 6, the Raptors have the momentum. And after three games of Kawhi owning his head-to-head matchup with Giannis, the Bucks have to be worried, though you wouldn't know it talking to their leader.

Closeout games in the NBA, especially at this point in the playoffs, are basketball war zones. And the Bucks will be ready to fight.

But while Milwaukee's season is on the line, history and the future are at stake for Toronto. The Raptors are one win away from their first trip to the NBA Finals. And a trip there makes their offseason pitch to Leonard more compelling.

Stories and rumors on Kawhi's impending free agency have hovered over the Raptors all season. He has already taken this team to a level it hasn't been to before. Imagine how much The North will love him if he delivers Toronto's first trip to the Finals.

Can Kawhi really walk away from that? The lure of bigger markets may be strong, but in the East's first year post-LeBron James, Kawhi has seized control of the conference. Can he really let it go after one year?