TORONTO — Kawhi Leonard walked back toward the Toronto Raptors' bench in Scotiabank Arena. The clock read 4.2 seconds. The score was tied. Leonard had been—and done—everything for the Raptors all night. He was the reason they were in this position, on the verge of advancing to the Eastern Conference Finals for just the second time in franchise history.

But he'd also nudged the door open for the Philadelphia 76ers, gifting them an opportunity to steal the series. He stood at the free-throw line just moments earlier, his team leading by two and the Sixers out of timeouts. Splash both, and the Raptors would have owned a three-point lead. Leonard hit the first, but the second shot, a line drive, clanked off the front of the rim. Sixers forward Tobias Harris grabbed it. He tossed the ball ahead to Jimmy Butler, who drove to the rim and floated a layup above the outstretched arms of Raptors forward Serge Ibaka and off the glass, tying the game.

Leonard's shoulders sank; his head dropped. Raptors head coach Nick Nurse called a timeout to draw up a play. It called for Raptors point guard Kyle Lowry to cut down from half court to the corner and Leonard to pop out to the perimeter off a Pascal Siakam screen. Sitting there on the bench, Leonard flipped on his hard drive.

First, he thought about a three-pointer he'd recently missed. "It ended up coming short. I knew I had to put it up even higher than that," he'd say later.

Then, he dug even further, back to Toronto's first-round playoff matchup against the Orlando Magic. Nurse had called a similar play at one point. 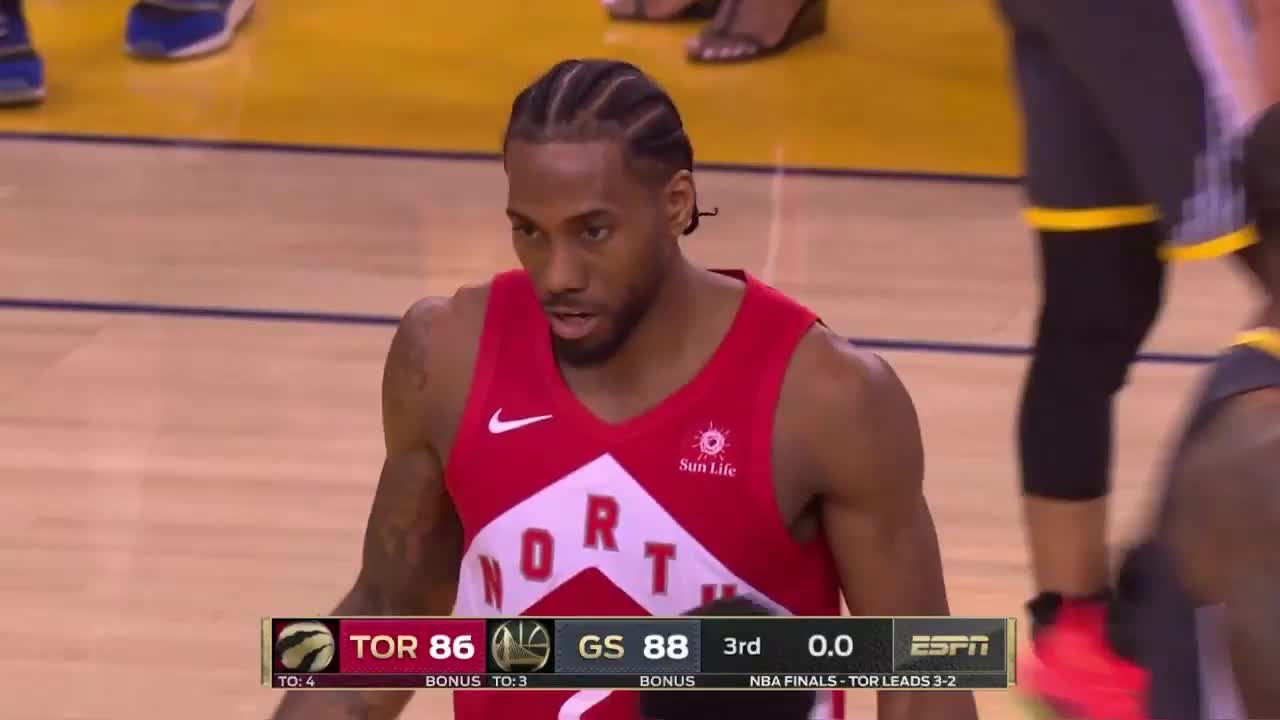 "I ended up just catching and shooting the ball, it was probably about three seconds," Leonard would say later. Sitting on the bench listening to Nurse, he noticed the clock. "There were four seconds left and, remembering that moment, I knew I had some time to try and get some space rather than just catch and shoot the ball."

There's a rule in basketball, one most players learn early: You can generally take one dribble for every second on the clock.

Leonard received the inbounds pass from Raptors center Marc Gasol and took four hard dribbles to the right, sprinting away from a Sixers trap and away from Ben Simmons, the Sixers player defending him, and toward the 7'0" Joel Embiid and deep into the right corner. He launched the ball over Embiid's arms and high into the air, his 39th shot of the game—this one a rainbow as opposed to his typical lightning bolt—and fell to the ground. The final horn buzzed. Leonard watched the ball bounce off the rim once, and then again, and then again, and then one final time before rolling through the net, lifting the Raptors to a 92-90 home Game 7 win, the first-ever Game 7 buzzer-beater in NBA history.

Mobbed by his teammates, the fans in the building screaming in ecstasy, the typically apathetic Leonard let out a roar.

"Like a goddamned movie," is how Raptors guard Danny Green described the play to Raptors assistant coach Jeremy Castleberry in a giddy Raptors locker room after the game.

"It is good that the balancing scales were there tonight," Nurse said.

It's a cliche to describe sports as a game of inches, but cliches also exist for a reason. They're often true, and in this case, those inches—Leonard's shot just evading Embiid's fingertips, the ball rolling forward on the rim and toward the net instead of backward and toward the floor—could alter the future not of just the Raptors but the entire NBA.

Leonard's situation in Toronto is well-documented. Over the summer, having decided that his very good team had plateaued and desperate to build a great one, Raptors team president Masai Ujiri rolled the dice: He dealt fan favorite DeMar DeRozan to the San Antonio Spurs in exchange for the disgruntled Leonard. Leonard will be a free agent this summer. The Raptors had one season to persuade him. Making the Finals or winning a championship wouldn't come with any assurances, but there's also no better recruiting tool.

That's what was on the line in Game 7, a game where Leonard had to scratch and claw his way to 41 points. There were stretches of action when he seemed to be the only Raptor willing and interested in taking a shot. A loss under such circumstances could have undercut all of Toronto's efforts. Instead, the Raptors presented Leonard with a gift, aside from a moment he'll never forget, one he so rarely allows himself to enjoy: the opportunity to feel.

"I'm a guy that acts like that I've been there before, so probably the last time you've seen me scream is when we won [during his time in San Antonio]," Leonard said. "Whenever it's a moment that I haven't really experienced, I probably try to give and show some emotion and let it just come out."

As Leonard was explaining to reporters how a human emotion managed to escape, Embiid was among his teammates, picking orange slices out of a black Tupperware container, searching for answers. The locker room was silent. Jimmy Butler studied a printout of a box score.

Embiid had played 45 minutes that night, a number that, just years ago, as he was recovering from multiple surgeries and being kept in bubble wrap, would have seemed unfathomable. This wasn't his best performance. He struggled on offense at times yet still finished the game with a solid 21 points on 6-of-18 shooting to go along with 11 rebounds, three blocks and four assists.

More telling: As had been the case all season, the Sixers hemorrhaged points whenever he left the floor. Embiid became the first player to play 45 or more minutes in a game, finish with a +10 rating or higher, and still watch his team lose.

He was their best player and most impactful player, just as he'd been all year. In 237 Eastern Conference semifinals minutes, the Sixers outscored the Raptors by 90 points. In the 99 minutes with him on the bench, the Sixers were outscored by 111. Embiid had given everything to this season, playing more games and minutes than ever.

He collapsed into Marc Gasol's arms after the ball dropped to the floor.

"You're going to be in this position again," Gasol told him. "Don't see this as failure. Losing is not failure."

T.J. McConnell, Embiid's longtime teammate and the only other player left from the Process years, led Embiid back to the locker room. Outside, Embiid was met by his girlfriend. She wiped away his tears. She put her hand on his cheek. She wrapped her arms around his neck.

"Have you ever lost a Game 7?" he asked general manager Elton Brand later on. Brand told him he had.

Embiid showered and dressed. He addressed reporters from the podium alongside Butler.

"I don't know, I mean, I don't know. Game 7. Losing a game that way. Last shot, after a hard-fought game. I feel like we had a chance, a lot of things are going through," he offered when asked to describe what he was feeling. He then summarized his thoughts more succinctly: "It sucks. I don't know, I can't explain it, it just sucks."

"To see him have the emotion that he has, and he's one of many in that locker room, it is painful for all of us, but to your question with Joel, he'll look in the rearview mirror and remember this," Sixers head coach Brett Brown said. "He will come out better and smarter and stronger and more aware of what it takes to play longer than we've been able to play."

The question now is: Who will be with him for that ride? Jimmy Butler and Tobias Harris are both free agents (Butler demurred when asked postgame about his contract). Ben Simmons is up for an extension. And of course, there's Brown. For months, Sixers managing partner Josh Harris has stoked rumors that failure to lead the team to the conference finals could cost Brown his job. It seems silly to allow a couple of bounces to decide a coach's future, but that Harris has refused to publicly back Brown is telling.

The two men met at half court moments before tipoff. The conversation ended with a fist bump. After the loss, Brown was asked if he has addressed these rumors with ownership.

"We've talked internally a lot, the club can respond to that," Brown said. He added: "I'm proud of what we've built. To take that next step is the mission."

For the Sixers, that next step will have to wait. The Raptors, meanwhile, get to move on. Maybe they beat the Milwaukee Bucks, maybe they fall. For now, thanks to a few inches, their season lives on, and with it comes hope, for now and beyond.