LSU freshman guard Javonte Smart will not play Saturday against Vanderbilt due to his alleged involvement in a pay-for-play scandal that is being probed by the FBI, according to Stadium's Jeff Goodman.

On Friday, LSU suspended head coach Will Wade indefinitely for his alleged role in the potential corruption scandal as well.

Per the Associated Press (h/t ESPN.com), it was reported Thursday that FBI wire-taps captured phone conversations that allegedly featured Wade talking about "taking care of" a player and his family. Wade reportedly referred to the player only as "Smart" in the conversations.

Wade's phone conversations were with Christian Dawkins, who was convicted in October of funneling illegal payments to the families of high-profile college basketball recruits. Dawkins is known to have worked with Louisville, Kansas and NC State.

Dawkins was sentenced to six months in prison for his role in the scandal. He is also the defendant in a bribery trial set to start April 22.

In one of the conversations between Wade and Dawkins, Wade said that the third party who received the offer involving Smart wasn't happy with his "piece of the pie."

Smart has been one of the No. 10 Tigers' best players as a freshman. He is fourth on the team in scoring with 11.5 points per game and is also averaging 3.3 rebounds and 2.5 assists. Smart is also third on the team in minutes per game behind only Skylar Mays and Tremont Waters. 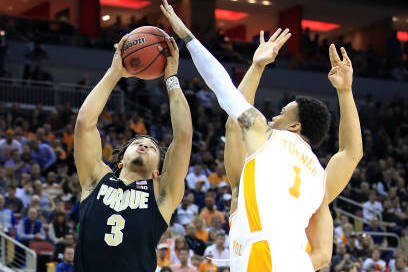 LSU has missed the NCAA tournament in three straight seasons and eight of the past nine campaigns. In its second season under Wade, however, LSU is 25-5 and tied atop the SEC standings with Tennessee. A win over Vandy on Saturday would help the Tigers clinch a share of the SEC regular-season title.

Smart's absence represents a significant loss for LSU, especially if he ends up missing more than just Saturday's game against Vanderbilt.

The Tigers are still heavy favorites to beat a Vandy team that is 0-17 in SEC play this season, but if both Smart and Wade are out into the SEC tournament and potentially the NCAA tournament, a once-promising season for LSU could go south quickly.