Kevin Durant and his company, Thirty Five Media, are partnering with ESPN to launch The Boardroom, a show that will "bring fans behind the scenes of the modern boardroom, showcasing the evolution of sports business through the minds of athletes, sports executives and tech moguls alike," per Kevin Ota of ESPN MediaZone.

"We're excited to partner with ESPN for this series," Durant said. "I'm looking forward to bringing fans insights from some of the greatest minds in the sports business world and show how athletes and thought leaders are changing the game."

The Boardroom will be broadcast on ESPN+.

"Kevin and I are looking to tell compelling stories with every Thirty Five Media project, and The Boardroom exemplifies that," Kleiman noted. "Each episode will feature topics that are top of mind for all sports fans in the form of candid conversations you can't find anywhere else."

As for Durant, the 29-year-old has won the past two titles with the Golden State Warriors, taking home Finals MVP both times. He averaged 26.4 points, 6.8 rebounds, 5.4 assists and 1.8 blocks per game last year. 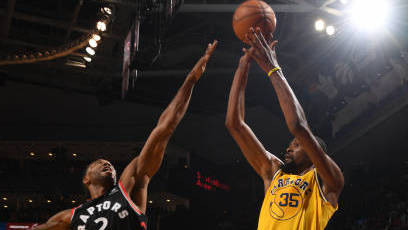 While Durant continues to dominate on the court, he has also grown his business interests off it. As Darren Rovell of ESPN wrote in May:

The Boardroom will be Durant's next venture in his growing business portfolio.