DETROIT — Jonny Venters thought the third time would be the last time. The human body can only be opened and sliced up so many times. He'd already spent too much time in his surgeon's office. With his X-rays up on the wall, his MRI on the computer screen, he would try to decipher if something was torn before the doctors did.

It had been less than two years since he completed his third Tommy John surgery in September 2014. But here he was again in July 2016, the ulnar collateral ligament in his left elbow torn for the fourth time.

Doctors told him that a fourth full surgery, which requires drilling into the bone, could lead to a dangerous break. Undergoing two Tommy Johns, let alone three, had already ended the career of so many before him. His wife, Viviana, cried when she heard the news.

The Atlanta Braves selected Venters in the 30th round of the 2003 draft, and after working his way through the minor leagues and recovering from his first Tommy John surgery in 2005, he became one of the best relievers in the sport. By 2011, he had reached the summit of relieving, earning an All-Star appearance as a setup man for Atlanta Braves closer Craig Kimbrel. That season he pitched 88 innings, struck out 96 batters and posted a 1.84 ERA and 3.0 WAR, highlighted by a hard sinker some called the most unhittable pitch in baseball.

He signed a minor league deal with the Tampa Bay Rays and continued to rehab with them, but he kept facing setbacks. The fourth tear was his biggest obstacle yet. But to Venters, the importance of reaching the majors paled in comparison to the real reason he wanted to throw again: He wanted to be able to play catch with his three kids when they got older.

"Each time, each surgery has presented a different challenge for me and my family," Venters said. "Whatever happens, happens. I can't control what that little ligament is going to do."

It was the reality that he might not be able to play catch with his young kids that pushed Venters to seek a solution. Dr. Neal ElAttrache presented him with an alternative to Tommy John: a minimally invasive procedure that would reinforce the ligament, cut his rehab in half and give Venters one last opportunity to throw a baseball again.

Venters went under the knife for a fourth time for a half-Tommy John, as he likes to call it. He didn't care about whether he could throw a big league pitch again. He offered to rehab on his own at his family's home in Suwanee, Georgia, throwing by himself into a net. If the rehab was not successful, he told Viviana he was willing to become a UPS delivery driver and leave his baseball career behind. The Venterses even pondered using Viviana's interior design degree to flip houses and live off the money saved from the early part of Venters' major league career.

Instead, the Rays offered Venters the opportunity to rehab at their facility. And last week he reached the majors again, called up from Triple-A Durham after spending all of 2017 in the minor leagues.

When the bullpen phone rang on April 25 asking for Venters to warm up, all he could think about was not humiliating himself, showing people how he got back to the big leagues. And as the Camden Yards bullpen door opened, Chris Davis in the batter's box, he faced the lights he hadn't seen since 2012 and felt deja vu.

"It was like my debut," Venters said. "Starting all over."

The scar has gotten bigger over the years, a little longer and a little wider. It's located on the underside of his left arm, a huge discolored gash around 10 inches long, a little less than two inches wide. It's a reminder of so many things. The three-and-a-half Tommy John surgeries. The 2,028 days between major league appearances. The weeks that became months, then years spent rehabbing his elbow.

There are so many questions that come with injuries, and Viviana went through all of them. How does this happen to one person? How do people go their whole career without injury and my husband tears his UCL four times?

When the Venters family would gather, his parents would jokingly argue about whose side of the family gave their son a ligament that had torn so many times. But the hardest part was having seen Venters be a star and knowing his arm probably would never allow him to reach that level again. And when it happened for the fourth time, the Venterses thought it was the end and began to second-guess how they had handled his success.

Viviana and Jonny Venters with their two sonsCourtesy of Viviana Venters

Venters' ascent to the majors had been so improbable. He was a 30th-round draft-and-follow pick out of a Florida high school who was so relatively unknown that some teams misspelled his name "Benters" on their draft lists. By the time he was 20 years old, he'd already undergone Tommy John surgery. But many, including then-Atlanta Braves manager Bobby Cox, believed he could be an effective closer in the major leagues.

None of that remained top of mind as Venters recovered from his fourth surgery. With his family settled in Florida near the Rays facility, he began his rehab. Some days his elbow was encased in piles and piles of ice. Other days he tested his arm's limits. Some days he spent in the trainers' office. The days began to blend together.

"That dude has a Ph.D. in rehabilitation and Tommy John," said top Rays pitching prospect Brent Honeywell, a good friend of Venters'. "He came with the same attitude every single day. There was no feeling sorry for himself."

There was never any expectation that he'd return to the major leagues, but Venters never gave up. There would be days when he would return home with no desire to talk about baseball. On the particularly hard days, Venters would play baseball with the kids, or Viviana would suggest making the two-and-a-half-hour drive to Disney World to cheer up the whole family. It was all about making life as normal as possible.

"I told myself going into the fourth rehab that this was going to be it," Venters said. "It was my last shot."

At this point, there was nothing to lose. Venters' dad, Jon, always told him he should keep trying until a baseball team pried the uniform off his back. There wasn't a backup plan professionally. His dad offered him a job working with him as a welder in Kentucky. He had no professional training otherwise, and coaching didn't interest him. The only thing he had to lose was time, and with the support of his wife, kids and parents, Venters thought the choice to continue trying, to not give up, was easy.

"I was not going to make the decision for him," Viviana said. "If later on down the road, you have any regrets and you think about what could've happened, I don't want that to be on me. I wanted him to make that decision."

He started shaking when he got the call he'd been waiting five years to hear, telling him he'd be returning to the majors. It came in the middle of a rain delay. Durham Bulls manager Jared Sandberg passed along the news: Jonny Venters would be joining the Tampa Bay Rays in Baltimore. The wheels started turning immediately, and the Venters family began booking tickets to make sure they saw his return.

"You never think it's really going to happen," Viviana said. "You want to be optimistic, and we were optimistic, but you don't want to put the cart before the horse. We talked about it a lot, him coming back. But if it happens, it happens. If it doesn't, it's fine. It's almost like we didn't want to jinx anything."

As he walked onto the mound at Camden Yards, all Venters could think about was not embarrassing his team, getting the out he needed to get and leaving the field in one piece. It took four pitches for Chris Davis to ground out—one for each surgery—three sliders and a fastball. The entire at-bat, both of Venters' parents and Viviana cried.

"Do you think we're going to cry every time he pitches for the rest of the season?" asked Jonny's mom, Tanya.

"I think so," Viviana said.

Venters is lost in the tunnels of Comerica Park on Monday night, trying to find his way to the field before batting practice. He's been here before, but he's forgotten which tunnel to take. Given the long rehab process, many of his peers might not have persevered as Venters did to have the opportunity to be lost in those concrete tunnels. Viviana ran into Jeff Francoeur, Venters' former teammate with the Braves and a 12-year MLB veteran, at their kids' school the other day after Venters' return to the majors.

"I would've quit a long time ago," Francoeur told Viviana. "I can't believe he kept going after all these years."

Venters' teammate Honeywell underwent Tommy John surgery before the season and asks his friend about what it took for him to work his way back to full strength. "He's no longer a non-success stat," Honeywell said. "This one worked."

It's inspired some on the internet to reconsider the name of the surgery itself.

"I read on Twitter that they should rename Tommy John surgery the Jonny Venters surgery," Viviana said. "I thought it was hilarious. I think we should. He has surpassed Tommy John and has had it the most. Maybe we could start a petition."

For Jonny and Viviana, his return to the majors in Baltimore made the entire journey worth it. After Viviana returned home to Georgia, she texted Jonny a simple message.

"That whole trip was like a dream," she wrote to her husband. "I would do it all over again, to have that feeling, to see you out there again even if that was it, if you faced that one batter and you never pitched again and you did it at the highest level."

What happens next almost doesn't matter, although Venters certainly wants to keep pitching in the majors as long as possible. He's still readjusting to life in the major leagues, moving from long bus rides to cross-country flights, from small-time parks to the brightest of lights.

Looking for the best way to the dugout on Monday night, he looks left and right. He asks the Comerica Park security guard to show him the best route to the field. He points him left and down the stairs.

"Thank you," Venters told the guard with a smile. "I'm learning my way again."

SB Nation Reacts: Baseball fans are ready for the DH to be universal 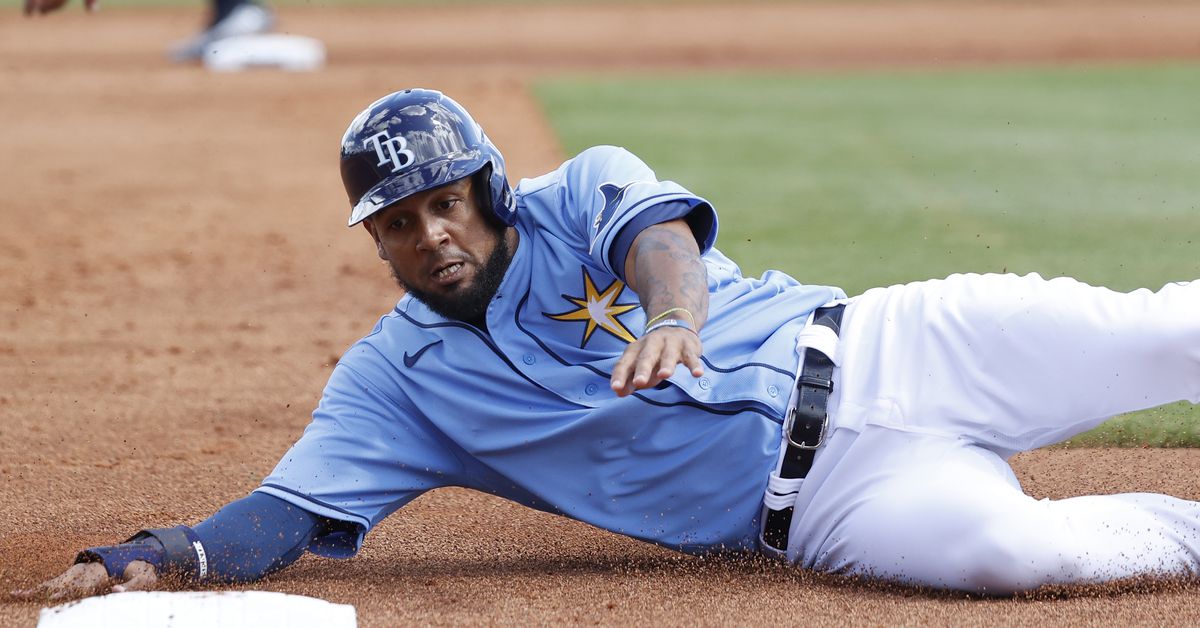 SB Nation Reacts: Baseball fans are ready for the DH to be universal

Where did stars like deGrom, Acuna and Alonso rank as prospects?