But when you visit the Buffalo Bills online shop, you can't buy an O.J. Simpson jersey despite the fact he achieved these feats while playing for the Bills—who drafted him No. 1 overall and with whom he spent nine of his 11 pro seasons.

Simpson, who was acquitted of double murder in the 1994 killings of his ex-wife Nicole Brown Simpson and Ronald Goldman, is now up for parole nine years into a 33-year sentence for a Las Vegas-area robbery and kidnapping. Simpson's fame outside of football, and more importantly his exhaustively documented murder trial, mean that for most people born after he stopped playing in 1979, his record-setting career is reduced to "retired football player" (and the way the Kardashians first got famous).

In Buffalo, though, shades of Simpson's stardom remain. "He's forever tied to this city," says Paul Peck, who's been a sportscaster in Buffalo for almost 30 years, including 24 as the Bills reporter for the city's WIVB-TV. "The team didn't have a huge amount of success, and then suddenly the biggest star in the NFL and, you could argue, in all of sports was a Buffalo Bills player—he put us on the map."

When Simpson was arrested in 1994, it had been 17 years since he'd left Buffalo, but the coverage still felt personal. "He was certainly one of the icons of Buffalo sports history, but all that's been tarnished based on what's happened since," says Chuck Frawley, the treasurer of the Greater Buffalo Sports Hall of Fame.

"The association with O.J. started to feel like a black mark on the city—people were angry," Peck adds regarding the reaction to Simpson's murder trial. "When someone makes a comment about the team, people perceive that as a comment about Buffalo. It shouldn't be that way, but it is."

A reminder of how fraught the O.J.-Buffalo relationship became arrived via the most unlikely of means—Bills second-round draft pick Zay Jones wore a shirt on draft night that riffed on Simpson's infamous 1994 police chase (the shirt has since sold out), and, unsurprisingly, the image of him getting a call from the Bills went viral.

"I actually just found it in a local store here. I thought it was pretty cool." Jones told The John Murphy Show a few days after the draft. "It was probably not the best thing to do. ... In no way was I trying to mock or to mimic that event. ... People attacked me for it, but that's OK."

"It got a lot of play here," Peck says of Jones' draft night attire. "People were like, 'What the hell was he wearing that for? What's he trying to say?'"

For his part, Jones told Murphy that he had no indication he would be draft by Buffalo.

The question of how exactly to approach Simpson's legacy on an institutional level still comes up in Buffalo.

"From time to time, people will ask, 'Have you thought about taking him out?' and, to be honest, it is something we've talked about," Frawley said of Simpson's place in the Greater Buffalo Sports Hall of Fame.

Simpson was in the organization's inaugural class in 1991.

"We're not going to take him out, but we do tend to downplay the fact that he's in our Hall of Fame," Frawley says. "Would we take [his criminal record] into consideration if he were somebody that were up for induction now? Probably, but he wasn't convicted...it's a tough call."

"Should he still be on the Wall of Fame at the Bills stadium?" Peck adds. "That's been a topic of discussion—'He embarrassed our city; his name should come off.' It never did, and I think that's fair. He's on there for what he accomplished as a football player."

Instead, the team functionally ignores Simpson's history in Buffalo except when absolutely necessary in citing team statistics.

"If they want to talk about Bills history, it usually starts with the Super Bowl run (1990 to 1993) and the fact that there are six or seven Hall of Famers from those teams," Peck says. "It's very easy to spin the narrative a little bit away from O.J., to sort of brush it under the rug."

"It's not something that they highlight in games or when talking about their past," says Frawley, a season ticket holder. "That's why it was interesting to see some of those highlights from the 30 for 30.

"I hadn't seen much of him running the ball in a very long time." 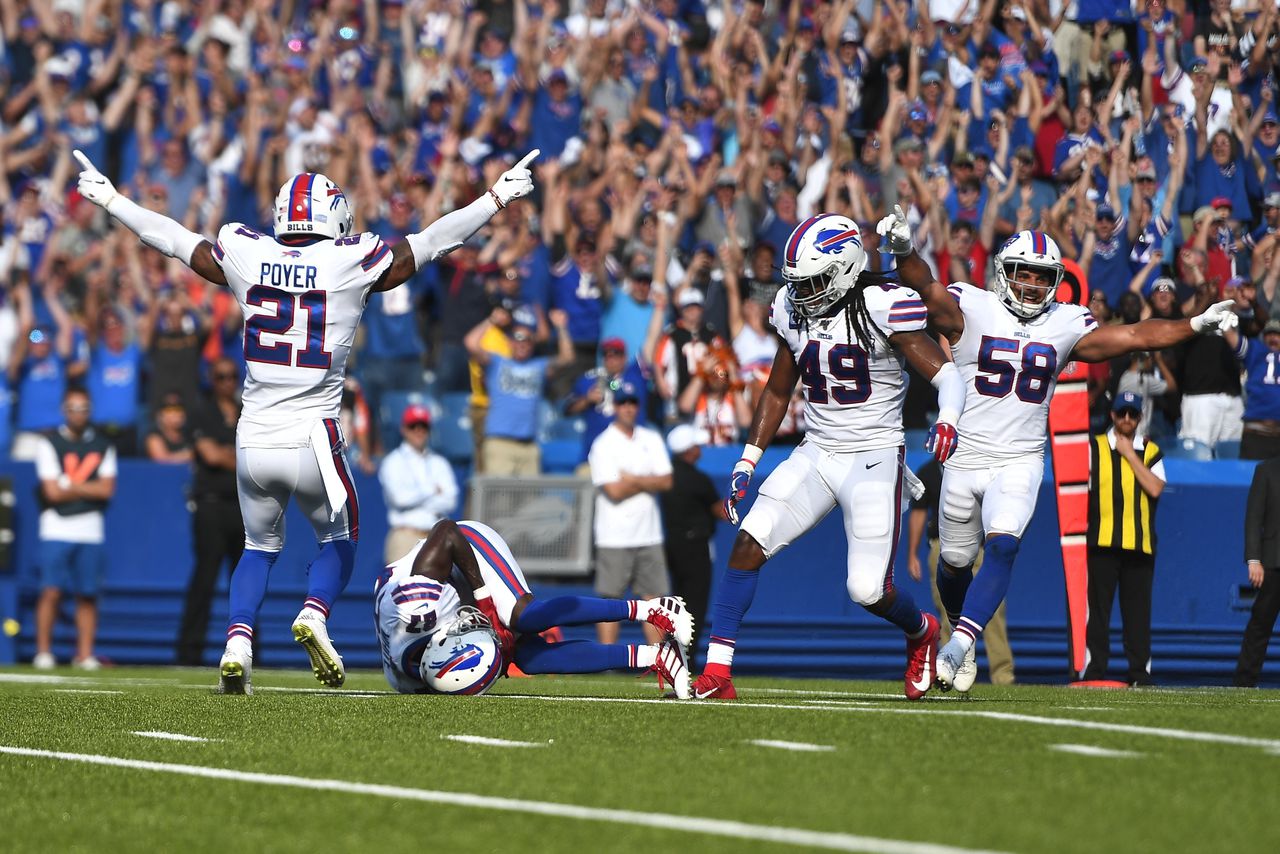