When Diego Simeone took over as manager of Atletico Madrid in December 2011, the club was in free-fall. They languished four points from the drop zone in the league standings while their cross-town rivals Real Madrid topped the table en route to a record-breaking, 100-point title win.

Atletico hadn’t beaten Real Madrid since 1999. A month beforehand, they had been stuffed 4-1 at the Santiago Bernabeu Stadium. Real Madrid’s Ultras Sur basked in their rivals’ misery. During the match, they cobbled together a human banner at the south end of the stadium with a despicable message: “Wanted—worthy rival for a decent derby. Apply here,” as per Marca (in Spanish).

Equally as worrying as their performances on the pitch was the way Atletico were being mismanaged operationally. Financially, the club was in a perilous state. During the summer of 2011, they lost their regular shirt sponsor, Kia, and was forced to sell its top players Sergio Aguero (Manchester City) and David de Gea (Manchester United) to stave off debtors.

The club was leaking money. By the end of the season, they were going to post accumulated losses of €229 million over six seasons, as per the blog The Swiss Ramble. Meanwhile, Real Madrid—which had sold off their training ground in 2000 for €500 million, according to The Swiss Ramble—were awash with money, topping the Deloitte Money League for the eighth consecutive season; they recorded over €500 million revenue for the 2011-12 season, which was almost five times more than Atletico’s income of €107.9 million.

Atletico had been fighting a losing battle. They got relegated in 2000. During two seasons in the second division, they stopped paying tax, as per The Swiss Ramble, building up a tax bill of €46 million. Back in the top flight in 2002, they spent with abandon in a reckless arms race with Barcelona and Florentino Perez’s galacticos at Real Madrid. In the 2007-08 season, for example, Atletico paid out more on their players than their entire annual operating revenue, as per Simon Kuper and Stefan Szymanski’s book Soccernomics. The numbers just didn’t add up.

For over half a century, Atletico had been playing second fiddle financially, and football-wise, to their richer neighbours Real Madrid. The problem now was that, from 2008, Spain was mired in recession. Unemployment was running at over 25 per cent. Ticket sales were down. Banks were cutting off Atletico’s access to cash.

The club couldn’t sell their ground, which they had valued at €400 million—the Vicente Calderon, the charming, crumbling old pile on the banks of the Manzanares River in the heart of Madrid—and couldn’t service their debt, even though they kept offloading star strikers like Fernando Torres (Liverpool), Diego Forlan (Inter), Aguero and ultimately Radamel Falcao to Monaco in 2013 for €43 million.

Atleti will move to a new stadium next season.PIERRE-PHILIPPE MARCOU/Getty Images

The European Union was appalled by the tax debt Spanish football clubs had racked up. When figures were released on January 1, 2012, a week after Simeone took charge at Atletico, the Spanish Sports Council reported (in Spanish) that La Liga’s clubs had a collective tax debt of €673 million. Atletico was the league’s biggest offender. They owed €120 million to the Spanish treasury.

Europe’s MEPs wondered out loud why the Spanish government was effectively subsidising clubs like Atletico, who weren’t paying their taxes, while they were begging for €40 billion in aid from the Eurozone and when Spanish Prime Minister Mariano Rajoy had been cutting medical services to immigrants and freezing pension payments to its elderly citizens.

Bayern Munich’s president, Uli Hoeness, who was later jailed for tax evasion, scrambled onto a patch of moral high ground to denounce the spendthrift ways of La Liga: “This beggars belief. We pay hundreds of millions of euros to keep Spain out of the s--t, and then they let clubs off their debts," as per the Guardian.

In truth, Atletico were too big to fail. They were Spain’s third largest club by fan support, with one of them being Spain’s King Felipe VI. Even when they got relegated in 2000, the number of season-ticket holders almost doubled in a show of solidarity, as per Alex Duff and Tariq Panja’s Football’s Secret Trade: How the Player Transfer Market Was Infiltrated.

Spanish politicians always treated football franchises warily. In 1995, for example, Celta de Vigo and Sevilla were relegated because of some financial irregularities. Thousands of fans took to the streets in protest. The government backed down, reversing the decision, as per Football’s Secret Trade. Atletico, even though it had built up a tax debt over six times the figure that put Glasgow Rangers into administration in February 2012, was untouchable.

Atletico, did, however, have to cut a deal with the Spanish tax authorities to service tax debt. They agreed to pay €120 million of back taxes by 2020. Interest payments were fixed at a plum annual rate of 4.5 per cent, as per Football’s Secret Trade.

In order to remain competitive on the pitch, though, they still needed money day-to-day. Atleti had to get inventive. Spanish banks like Banco Santander and BBVA, who were struggling with businesses that were defaulting on loans and homeowners who could no longer meet their mortgage payments, wouldn’t loan the club money, as per Football’s Secret Trade. Atleti couldn’t extend its bank overdraft. Miguel Angel Gil, Atletico’s CEO and majority shareholder, had to put his country house up as collateral for a loan, as per Football’s Secret Trade.

The way Atletico’s finances stacked up against Real Madrid’s was illuminating. Perez’s voodoo economics, packing the team with stars who grew the club’s brand and shirt sales despite Jose Mourinho’s championship win in 2012 being the only league trophy one of Perez’s appointed managers has won since he became president in 2000, has increased the club’s income fourfold in the last 15 years.

Real Madrid could afford to pay Cristiano Ronaldo’s world-record transfer fee of €93 million in 2009 in a single instalment, as per Football’s Secret Trade. Atletico Madrid couldn’t afford to pay some of its players their wages. Diego, one of its midfielders on a season-long loan from VfL Wolfsburg in 2011-12, filed a claim for unpaid wages, as per the blog The Swiss Ramble.

To get his hands on cash for the club during the recession, Gil turned to private lenders. After years running the business side of both Manchester United and Chelsea as a chief executive, Peter Kenyon pitched up in Beverly Hills, California, working for Creative Arts Agency (CAA), a management company for Hollywood stars like George Clooney as well as football icons like Ronaldo and Mourinho.

Kenyon headed up a fund for CAA—the company was domiciled in Ireland and New Jersey for tax reasons; Gestifute, the management company run by super-agent Jorge Mendes, was listed as owning half its equity, as per Football’s Secret Trade—to raise money for clubs like Atletico. The system was straightforward. It sourced wealthy individuals who were willing to buy the transfer rights of players tied to cash-strapped clubs. It’s a practice that has been commonplace in football, particularly with South American footballers, since the 1960s, and became notorious when West Ham United signed Carlos Tevez and Javier Mascherano for cut-price deals in 2006.

In March 2011, the CAA fund managed by Kenyon paid Atletico €1.5 million for 40 per cent of the transfer rights of Saul Niguez, a 16-year-old who left Real Madrid’s academy because of bullying, as per Marca, and has since become a mainstay of Simeone’s team. Atletico raised a further €3 million by selling 30 per cent of the transfer rights of Koke, another regular on Simeone’s starting XI, to Kenyon’s CAA-managed fund.

Two of Atletico’s most notable trades in the third-party transfer rights of its players came with the sales of Falcao and Diego Costa. Atletico sold 33 per cent of Falcao’s transfer rights to a hedge fund called Doyen Sports, as per Football’s Secret Trade. It guaranteed the hedge fund €12 million within two years.

Gil also borrowed cash from a British tax exile Michael Tabor (who made a killing when he sold his betting chain to Coral in 1995). Tabor, who is known mainly these days as a racehorse owner with a share in the Coolmore Stud, advanced Atletico income from its broadcast deal with the cable TV company Sogecable, as per Football’s Secret Trade.

Gil’s ability to scrabble together short-term cash during the 2011-13 seasons helped to get Atletico through a dicey patch. In May 2013, they defeated Real Madrid for the first time in 26 game—in the final of the Copa del Rey at the Bernabeu. They also qualified for the following season’s Champions League for the first time in 17 years, making it to the final in 2014 and 2016.

Last year, Atletico earned €82 million from UEFA for making the final, as per TotalSportek.com. The tax debt is down to a manageable €40 million, and they are hoping a win against Real Madrid—in a Champions League first-leg semi-final—will help to propel them towards another lucrative final in Europe's premier club competition.

The results: Who have fans named as Atletico's all-time best centre-back? 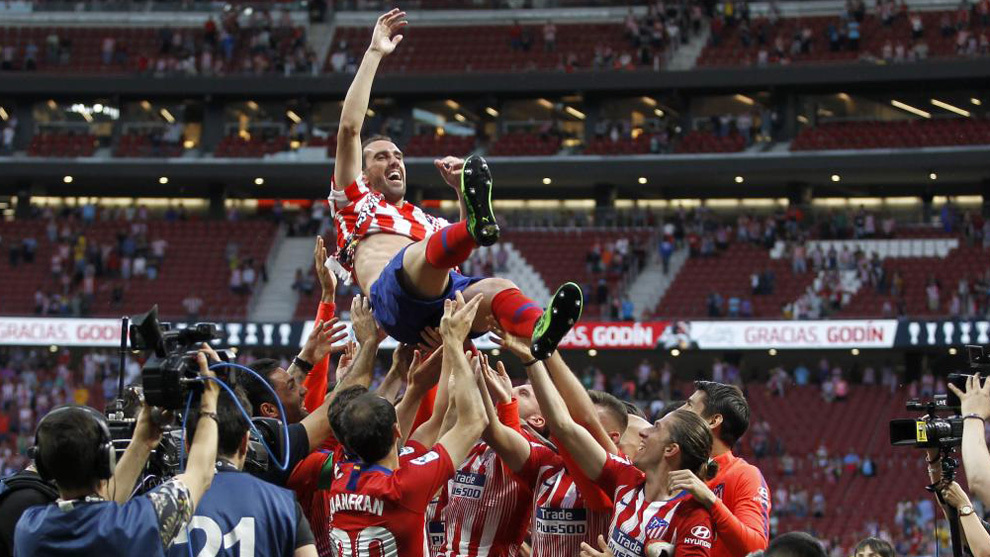 The results: Who have fans named as Atletico's all-time best centre-back?

Atletico Madrid are awaiting the players' response before submitting an ERTE 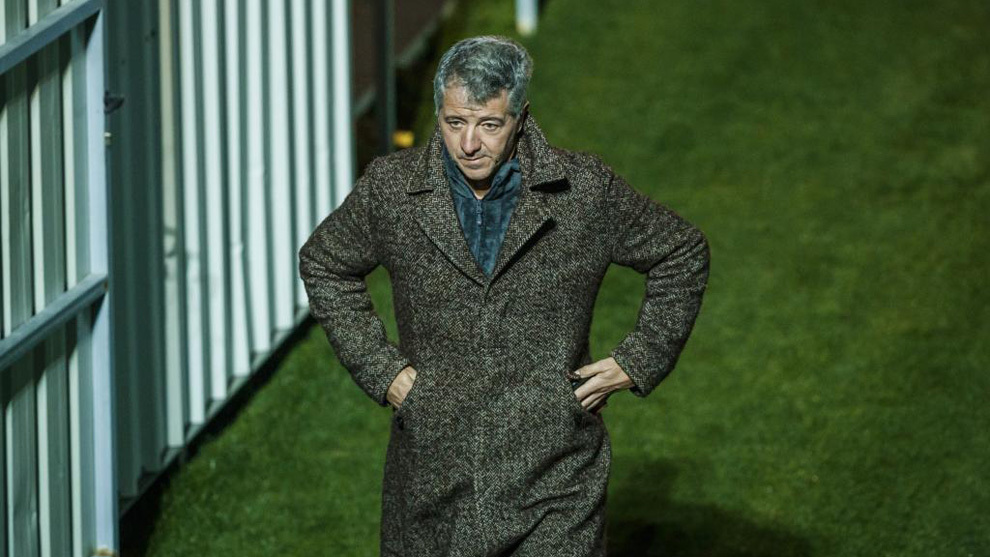 Atletico Madrid are awaiting the players' response before submitting an ERTE