Oakland Raiders linebacker Aldon Smith won't be suiting up for his team as it prepares for the playoffs.

The NFL confirmed Friday it will not reinstate Smith and will instead re-evaluate his situation March 15, per ESPN.com.

The league suspended Smith in November 2015 after his arrest in August on charges of vandalism, driving under the influence and hit-and-run. He pleaded not guilty.

The 27-year-old applied for reinstatement in October, with his suspension set to end on Nov. 17. 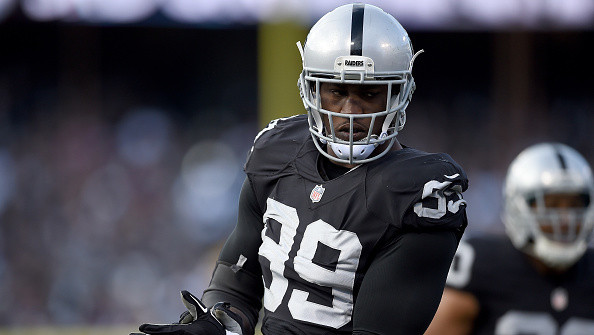 We're going through all of the information to make sure we have it all absolutely accurate that we all understand exactly where he is in the process of trying to get himself in a position where he's got his life in order enough to resume an NFL career. It was good for me to hear from him personally. But when we get to that decision, we'll certainly announce it.

In 2012, Smith was a Pro Bowler and a first-team All-Pro after recording 19.5 sacks. Since then, a series of off-field incidents have hindered his NFL career.

He had arrests on suspicion of driving under the influence in 2012 and 2013. In April 2014, authorities arrested Smith at Los Angeles International Airport and booked him for a false bomb threat. The San Francisco 49ers released Smith in August 2015 following the alleged hit-and-run.

The Raiders could certainly use a talented pass-rusher at the moment. Oakland is tied for 29th in team sacks (25.0) and 27th in adjusted sack rate, according to Football Outsiders. Beyond Bruce Irvin and Khalil Mack, the Raiders lack defenders who can consistently pressure the quarterback.

Granted, it's questionable how much of an impact Smith would have at this stage of the season, given he has missed a year-and-a-half of game action. He's bound to be rusty whenever he steps on the field again.

Smith has one more year remaining on his deal with Oakland. The NFL's timeline for Smith's potential reinstatement would allow the Raiders to go in a different direction in the event Goodell decides to prolong his suspension.