Manchester United's No. 7 shirt has taken a bit of a hammering in recent seasons. Perhaps Sir Alex Ferguson's decision to award it to Michael Owen after Cristiano Ronaldo's departure resulted in some kind of curse, or perhaps for more prosaic reasons neither Owen, Antonio Valencia, Angel Di Maria nor Memphis Depay have been able to live up to their illustrious predecessors' billing.

For a little over 20 years, though, that number was infused with a sense of mystique and cool by three different but equally iconic players. Eric Cantona, David Beckham and Ronaldo each stand as a symbol of different periods of the club's most dominant era.

Each serve as a symbol of their time in a broader sense, too.

Cantona was the transitional spearhead—helping United move from the incredible physical toughness of the 1994 side to the more modern, European team that would go on to Champions League success. The Class of '92 grew around him, with the shirt's next incumbent watching and learning.

Beckham was, in some ways, the defining British cultural icon of his age—fashionable and part of Cool Britannia's most mainstream power couple. He might just be the most famous footballer since Pele.

Ronaldo picked up the Beckham baton and ran with it—replacing him in terms of fame and global status and changing the profile of United's football.

Having him on the right wing with his searing speed, ever-developing strength and remarkable directness changed the team from one wherein Beckham swung in crosses for Ruud van Nistelrooy to one wherein Ronaldo and Wayne Rooney cut through teams with counter-attacking speed and incision the likes of which had rarely been seen anywhere in the game.

The three former United No. 7s can probably lay a claim to giving many fans their love of United, too. And between them they served up countless good footballing memories. Let's take a look at some of their best moments, as chosen by you.

This tells a story of a bygone age at United. The Cliff was the club's pre-Carrington training ground, and it was accessible by fans. Cantona at the Cliff is the stuff of legend—his practice routine having inspired the young players developing at the club at the time. Beckham's set-piece excellence might not have ever become what it was without seeing the Frenchman's willingness to work on skills after training was officially done.

And as this memory reminds us, autograph hunters had much better access than they do now. The club needed to modernise, of course, but some of the connection between United and the community it serves was lost when training moved from the Cliff to Carrington.

Cantona's importance to United's first league title under the not-yet-knighted Ferguson cannot be overstated. Here was yet another example of the kind of telling impact that made him a club legend.

Here is also yet another example of the spirit the club had built under Ferguson. On Boxing Day 1992, in the running for the title again having thrown their best chance in years away the season before, United were 3-0 down to Sheffield Wednesday after 62 minutes.

After 90 minutes, the score was 3-3. Brian McClair had fired United back into the game with a brace, and Cantona equalised. On 1 January, 1993, Ferguson said, per the Guardian:

More than at any time since I was playing, the club is alive. The 3-3 draw at Sheffield Wednesday was magnificent. It's as if the good old days were back and the major factor, as far as I'm concerned, is the Frenchman. Eric Cantona is so clever it's untrue and the lovely thing about special players is they're infectious. The things he tries, the others try, and it's the way the team are playing that's got middle-aged fans jumping about like two-year-olds.

It also got turkey butties flying through the air.

@UtdRantcast Cantona: hitting the bar away at Chelsea in 1994(?) from just inside their half. Chelsea fans stood to applaud.

This memory is a reminder that by 1993 (when this took place) United were not all that hated yet. Barring Swansea City fans showing their appreciation for Ryan Giggs, it is hard to remember a domestic fixture wherein opposition fans have applauded a United player for their endeavours in the recent past.

Admittedly, there have not been that many impressive endeavours by United players in the recent past, but nonetheless, this is a reminder of a time gone by.

There were plenty of mentions for Cantona's winner in the 1996 FA Cup final against Liverpool or his goal-post swinging celebration when he returned from suspension. There were, of course, numerous shouts for his chip against Sunderland and the subsequent imperious upturned-collar celebration.

There was mention of his kung-fu kick at Crystal Palace and the oblique press conference that followed, of the Nike adverts that made him seem like the coolest man in the world and a plethora of other wonderful football moments. Cantona was a United icon, and he will never be forgotten.

This is a lovely mention of something that gets lost in the glitz and glamour of more obviously brilliant Beckham moments.

Gary Neville was the best man at Beckham's wedding, and their off-field friendship was obvious on the pitch. Neville seemed a different character to Brand Becks—certainly no-one was paying much attention to his hairstyle.

But on United's right flank, their shared work ethic was obvious. And over the years, the partnership got better and better as Neville worked on his crossing, becoming a dangerous outlet on the overlap in Beckham's later years at the club.

Of course, United could rely on Becks to put in a defensive shift, too. It was an important partnership for the Red Devils during one of their most successful periods.

@UtdRantcast "It's Beckham, it's fantastic!" against Barca in the Champions League at OT in 1998.

Beckham's most telling contributions to United's Champions League win in 1999 were the two corners he put in for the goals that won them the tournament. But one of the reasons United managed to win the treble in 1999 was the sheer volume of footballing weaponry at their disposal. They had so many ways to win games and so many routes to goal.

The England international's free-kicks were most assuredly one of them. Going toe-to-toe with Barcelona at Old Trafford in September 1998 was one of those times that greatness felt possible. The free-kick was one of so many he scored—the frisson of excitement that built whenever United got a set piece in Beckham range was pronounced.

Whether Beckham is one of the all-time greats of the global game—beyond his fame and reputation—is a subject worthy of debate. What is not up for any debate at all is that during the 1998/99 season his performances were of immense quality and consistency. In that United side, he was without doubt worthy of the term world-class.

Each of the moments mentioned above were pivotal—before Ryan Giggs' amazing goal in the semi-final of the FA Cup against Arsenal there was an almost equally brilliant goal from Beckham. Against Tottenham Hotspur on the last day of the season, with United trailing and in need of a win to secure the title, it was Beckham who equalised.

And, of course, there were those corners—the two most important in the history of the club.

@UtdRantcast Ronaldo's debut... left the ground and rang my dad to tell him about Ronaldo, said he'll be the best in the world one day

Ronaldo's early United career was far from plain sailing. There were plenty of doubts about whether he would ever make it—he looked a little too slight, a little too showy. But whenever those doubts emerged, memories of his debut against Bolton Wanderers would offer a reassuring reminder that here was a special talent.

It was like a video game that starts with your character powered up, before those powers are taken away in order to be re-earned over the course of the hero's journey. Perhaps it was the adrenaline of the moment, but Ronaldo offered a foreshadowing of the player it would take him a little while to become. No surprise, then, that people were suggesting he was destined for great things.

@UtdRantcast CR7's free kick against Portsmouth at OT and the primal, mad celebration that followed.

@UtdRantcast Ronaldo's late goal at Craven Cottage when he ran down the left wing. Stupidly good and important goal

What is most interesting about the selections above is not the moments to which they refer, each as good as the last in terms of footballing ability. It is the language used to describe them. "Utterly monstrous," "utterly ridiculous," "primal, mad celebration," "stupidly good and important." There are superlatives everywhere, and they are so richly deserved.

Watching Ronaldo in action for United, once he had hit his prime, was so viscerally thrilling it is no surprise that such language is used.

Football can quite often be a little humdrum, there are often large swathes of the game where not all that much happens. We stick around for the peak moments that emerge from the monotony.

Ronaldo's United peak was almost hard to process. He was so good, so often. He made so much happen. He was so direct and purposeful and able to do things that no one else had ever done before. United were brilliant for lots of reasons from around 2006 to 2009, but the best thing about watching them was almost always Ronaldo. He looked like a superhero in real life.

He might just be the best player ever to play for the club, which is obviously saying a lot.

No wonder the No. 7 shirt has been a little hard to fill since his departure.

Mason Greenwood Best U21 In Europe 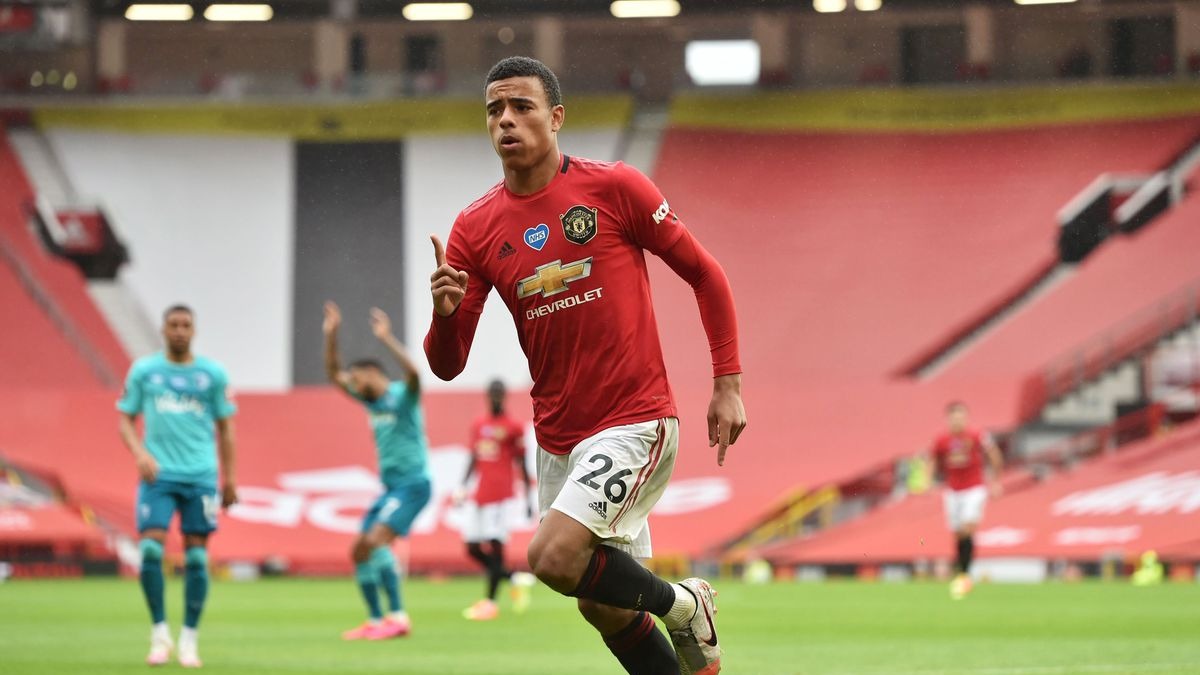 Mason Greenwood Best U21 In Europe

How to watch Aston Villa vs Manchester United

How to watch Aston Villa vs Manchester United