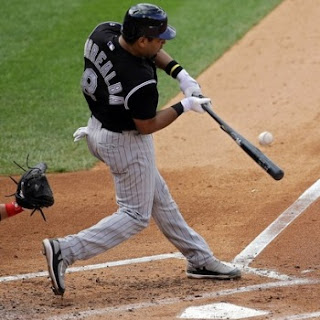 Never, ever go to sleep on these Rockies.

On a night that seemed primed for a letdown, the Rockies came off the deck in the ninth inning, off perhaps the best closer in the National League, to win 4-1 against the Padres in San Diego.

After completing a 10-game home stand in which the Rockies went 9-1, the Rockies were going on the road to face a hot San Diego team, winners of their last five series. It would have been easy for the Rockies to have a lapse in focus. In the early part of the game, it seemed like it might be just that.

Jorge De La Rosa came out and loaded the bases in the first inning, then walked in the Padres first run. He was able to wiggle out of the situation and limit the damage to just the one run. It looked, however, like De La Rosa may be in for a bad night. Instead, he gathered his composure and shut the Padres down over the next six innings. In fact, De La Rosa's stuff may have been better on Friday than it's been all season long.

The Padres, basically starting with their bullpen after Double-A call up Mat Latos was shut down for the season due to a high amount of innings, were effective in shutting down the Rockies for the first eight innings. With only three hits in the game, the Rockies went into the ninth inning facing the Padres best pitcher, Heath Bell.

Bell, who had yet to blow a save at Petco Park and had blown only three saves all season, quickly realized how resilient this Rockies team is.

After starting the inning out with a Todd Helton walk, Bell got Troy Tulowitzki to fly out to right field. Brad Hawpe grounded a seeing-eye single to left field, then after a walk to pinch hitter Jason Giambi, and a strike out to pinch hitter Matt Murton, Yorvit Torrealba stepped to the plate representing the Rockies last hope.

After working the count to 2-2, Torrealba lined a fastball into the right-center gap for a bases clearing triple. The Rockies dugout went crazy and after a quick 1-2-3 inning the Rockies had locked up yet another win and gained yet another game on the Giants and Marlins in the NL Wild Card race.

The late-inning magic is absolutely incredible. This team truly believes that they are going to win every single game they play. They never quit.

As the Rockies are in the midst of another late-season run, the inevitable comparisons to 2007 are starting to be thrown around. With the Rockies not being a favorite at the season's commencement, and then stumbling out of the gate, it makes sense to compare the two teams. Yet, there is a distinct difference.

In 2007, the Rockies essentially knew that they would have to win every game down the stretch to have a chance at the playoffs. On Sept. 14, they found themselves six games out of the Wild Card race, behind four teams. To say that the odds were against them would be a huge understatement.

The '07 squad was young. They were talented, but to a certain degree they were raw. They had only one true veteran leader in the clubhouse in Todd Helton. To roll off the streak that they did, winning 14 out of 15 to win the Wild Card, they played in a dream world.

They found ways to win, and stayed in a near-euphoric state in order to not realize what they were doing. If they had a chance to take a breath, they may have faltered, and they knew it.

This squad is experienced. They were on the wild ride that was 2007 and they are older. They know that they are good, and they know how to win. This Colorado Rockies team can win at home and on the road. They go out every single night and expect to win, regardless of who is on the mound.

Winning a series is no longer the goal. These Rockies want to win every single game that they play, and they believe that they will.

It does not matter if they are losing with two outs in the ninth, they believe that they are going to find a way to win the ball game. That is exactly what happened on Friday night in San Diego.

The Rockies look to gain another game on either the Giants or Dodgers on Saturday night. Highly touted prospect Esmil Rogers will make his Major League debut for the Rockies, taking the rotation spot of Ubaldo Jimenez who was pushed back to Tuesday with his hamstring injury.