It's time for the Atlanta Falcons to bench Kroy Biermann. At some point, players tend to do more harm than good by being on the field. And for Biermann, now is that time. He's been outperformed by Jonathan Massaquoi and Stansly Maponga as a pass-rusher and run defender.

On top of that, his explosiveness in coverage is starting to lack. The real quality that Biermann brings at this time is leadership and experience in the scheme. He could still be feeling the effects of an Achilles injury that sidelined him from the 2013 season.

But even then, the biggest issue that Biermann has is that he can't get off blocks. He isn't technically sound at the point of attack anymore, and his lack of bulk gets exposed without the speed he once had. He also used to drop deep as a safety, and he hasn't done that since before the Achilles injury.

Biermann's decline was rapid and is now starting to hinder the defense. A defense that looks like it was built for a combination like Massaquoi and Maponga to thrive in. The rotation moving forward needs to be adjusted, and the only real way to do that is to effectively bench Biermann.

In 2012, Kroy Biermann played so well that he allowed the Falcons to cut Ray Edwards, as they realized Biermann was better for Mike Nolan's scheme than Edwards was. Biermann could drop deep into coverage as a free safety or attack the quarterback from any angle. He allowed the Falcons a perfect zone-blitz chess piece for a scheme that needed it.

Then 2013 hit. After showing a good performance in the first game of the season as a hybrid strong-side linebacker and defensive end, Biermann tore his Achilles tendon and missed the rest of the season. Because of the loss of Biermann's 2012 abilities in their defense, the Falcons were unable to keep teams at bay and lost 11 games after an injury that was just one of many.

He tends to get washed out pretty easily in the running game, and the lack of effort once he's engaged is pretty alarming. At this point, Biermann's best bet would be to retire and worry about the TV show that he does with his wife instead of playing football in the NFL. He's not an asset for any team as the low-level backup that he is looking like this year.

@ScottCarasik @bleacherreport He just be too tardy for the sack party.

Jonathan Massaquoi and Stansly Maponga were very similar players coming out of college to a pair of players who once played for Mike Nolan in the pairing of Elvis Dumervil and Cameron Wake. Both players had their breakout seasons under Nolan's guidance. And both players took multiple years to develop into the stars that they are now.

Massaquoi is similar to Wake—although not nearly as good—in both build and how both players do better on the strong side than on the weak side as a pass-rusher.

But they both are good in the run game and have power despite relatively small frames (Massaquoi is 6'2", 264 pounds; Wake is 6'3", 258 pounds). Massaquoi has the potential to be a 10-plus sack player if he was used in the majority of the snaps.

Maponga gets off the line well and has been able to play well against the run early in his career. With Brian Cox teaching him what to do, his pass rushing should take some strides forward, but as of now, he's still a work in progress there. Even still, a work in progress is better than someone falling off a cliff.

Both Massaquoi and Maponga are fifth-round picks. But they are the kind of picks that fit into the market inefficiency concept.

They fit into Nolan's scheme like gloves. The only question is how to get them to reach their potential as soon as possible. Because as it is right now, they need to see more snaps to get anywhere close to their potential. It's not their athleticism that needs work; they just need experience to get better.

What the Roles Should Be For Atlanta's Edge Players Moving Forward

The featured alignment for the Falcons players moving forward should put an emphasis on getting Jonathan Massaquoi on the field in as many packages and plays as possible.

He's the guy who needs to see the nearly 80 percent of the snaps that Kroy Biermann is seeing. He should be playing as the starting weak-side end or weak-side linebacker depending on the alignment.

When Osi Umenyiora comes in for the pass-rushing alignments in nickel and dime formations, Massaquoi should shift over to the left side of the field. Osi is better as a right-side rusher, and Massaquoi is better and more productive as a left-side rusher. Maponga in that situation would be ideal as the run-down defensive end on the strong-side.

However, if they need a linebacker, the Falcons should put Joplo Bartu out there instead of Biermann. And while, yes, Bartu normally plays inside linebacker, Prince Shembo looks like he's already beating him out for playing time.

In the end, Biermann needs to be on the bench. He's not an asset in the run game, as a pass-rusher or in coverage any more.

When your only asset to a team at a certain point becomes your work ethic and leadership, it's time for you to find your way to the bench...or off the team.

All stats used are from Pro Football Focus' Premium Stats (subscription required), ESPN.com, CFBStats or NFL.com. All combine and pro day info is courtesy of NFLDraftScout.com. All contract information is courtesy of Spotrac and Rotoworld.

Scott Carasik is a Featured Columnist for Bleacher Report. He covers the Atlanta Falcons, college football, the NFL and the NFL draft. He also runs DraftFalcons.com.

Landry after hip surgery: 'Everybody that was talking s--t ... ima see you when I see you and I ain't got s--t to say' 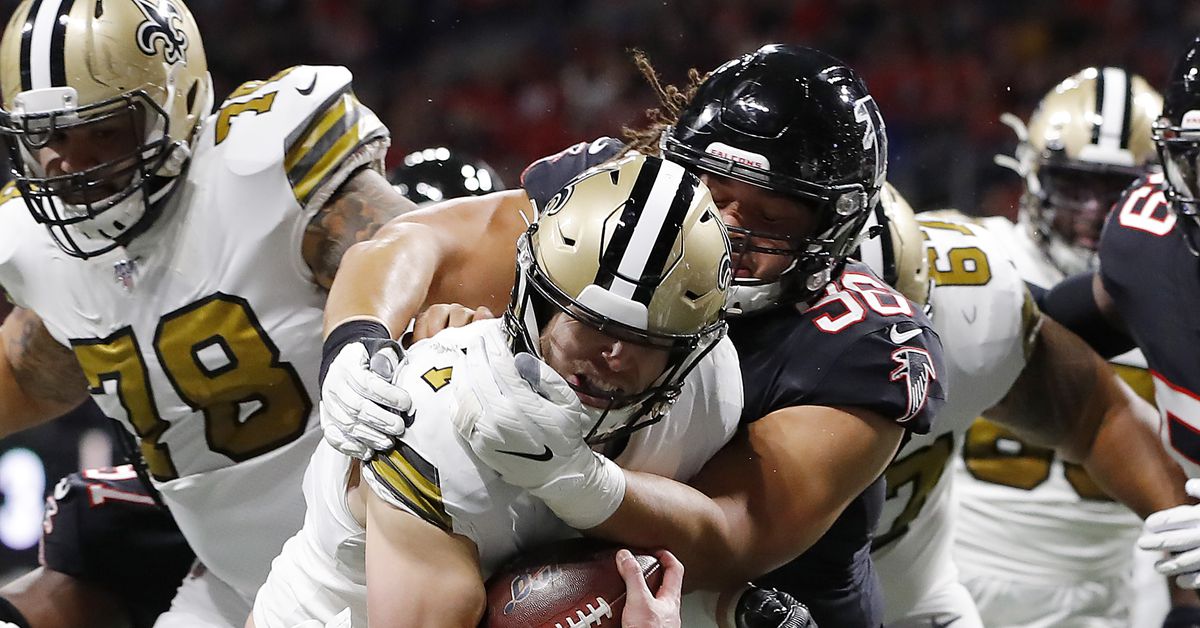