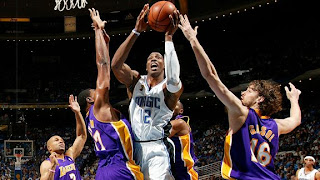 Tonight in Orlando, with the prospect of a short series and a Minnesota Vikings-Esque NBA Finals record in front of them, the Magic came out and absolutely shot the lights out.

You can watch a lot of basketball on a lot of levels and never see a team shoot 75 percent from the field, let alone in an NBA Finals game versus top competition.

It was the highest field goal percentage in a half in Finals history. And when it was over, they were up by a whopping five points, 59-54, because Kobe Bryant responded with 21 first half points of his own. The Lakers weren't just laying down or rolling over.

It was riveting basketball, because both teams were playing at a very high level, the game had flow, and a relatively low number of whistles.

In the third, the Magic maintained the lead as both teams cranked up the defense a bit, with Rafer Alston earning some minutes with good shooting, and Courtney Lee giving Bryant more to worry about on defense than Mickael Pietrus. The Mamba's 4-for-8 from the line was a quiet killer, and the home team led by six at the end of three.

In the fourth, the Lakers went 7-for-7 from the floor to overcome some turnover issues, and rode Pau Gasol and Lamar Odom for point production. The Magic really don't have a good defensive big outside of Howard, and it shows when Lamar Odom and Pau Gasol are clicking.

In crunch time, Bryant finally got a make and the Magic tensed up with turnovers and dicey halfcourt decision-making.

After trailing since the second quarter, the Lakers' Gasol tied it at the line with just under three minutes left.

The home team got a break when Pietrus flushed a ball that might have been in the cylinder.

Bryant found Gasol out of a trap for a layup to cut it to one, but Lewis answered with a long deuce at the end of the shot clock and a bad possession, giving the Magic a 3-point lead with 66 seconds to play.

On the next possession, Bryant was bailed out on a terrible call against Dwight Howard, but karma dictated further free throw misery, and the lead was two after one miss.

Another terrible possession for the Magic led to an Odom block on Lewis, but Pietrus and Howard erased the problem with a swipe on another Bryant hero drive, and the ex-Warrior hit both free throws to make it a four point lead with 28.7 seconds left.

Pietrus isn't a good free throw shooter, but you'd never know it from how he canned the pressure shots there.

With the Lemur heads bleating about defending the three, Bryant missed a bad one, but Odom saved the board with a terrific play as he was going out of bounds. Ariza, Bryant, and Fisher all missed progressively wilder threes, and by the time Bryant was able to drop in a layup, there was so little time on the clock that the Magic authorities had already dropped confetti.

Pretty good game, especially if you like crazy-hot shooting, even if the ending was a little scattered.

Frankly, I was expecting the Magic to win this game a lot easier than they did. It was the game that the Lakers didn't need, with the home team getting the friendly rims and looks.

But it also fit the pattern of how to beat a Bryant team; you have him get off early, and eventually he'll punch himself out, and won't have the legs to close.

Even with a near-perfect game on offense (the Magic set a new shooting record for a Finals game in terms of percentage from the floor), it was tight to the close, and had Bryant gotten a few more makes, the series could be in a 3-0 hole.

Instead, we have a series, and a fairly entertaining one at that. But if the Magic really want to win this, they better keep getting nothing but cotton.

http://fivetooltool.blogspot.com - The Sports Blog That Loves You Back!