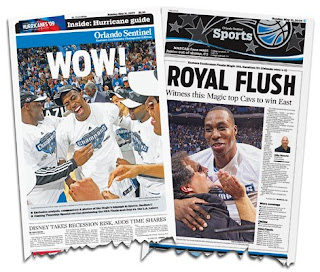 It's amazing. So amazing.

I still can't believe my eyes when I see the NBA Finals commercial featuring the Magic vs. Lakers. I'm excited, I'm confident, and I'm ready.

The team has had their ups and downs this year—losing Jameer Nelson, tense moments between Dwight Howard and Stan Van Gundy, and four last-second playoff losses. However, the Magic have shown their tenacity and durability as a team as they're now taking on Kobe and L.A. in the big show.

"We've been through everything you could possibly go through in the playoffs in one season," Van Gundy said.

Even so, the blue and white are still not satisfied.

"You can look at everybody in the locker room's eyes as well as the coach and tell that we are happy about getting to the Finals, but we are not tremendously happy enough yet," forward Rashard Lewis said.

And rightfully so. The Magic have only made it to the NBA Finals one other time, in 1995. Orlando was swept by Hakeem Olajuwon and the Houston Rockets.

Soon after, Shaquille O'Neal bolted for L.A., and the Magic franchise took a major blow. I haven't seen Orlando like this since 1995, and I tell you, it's great.

"I felt like we were a laughingstock around the league. Everybody played the Magic, they thought about Disney World. So I just wanted to change that," Dwight Howard said.

The Magic are no longer a laughing matter, even though it seemed that the media and NBA have tried to keep it that way. Is it really that bad to see the underdog win? Is it really not that exciting?

Nevertheless, it doesn't matter what the fans or the league wants anymore. Dwight and the gang are ready to take on the Lakers on Thursday night, and so is the city of Orlando.

Here's to Orlando getting put on the map again. Here's to a championship win. Blue and white Ignite! Go Magic!

Only. Two. Nights. Left. Here are the updated playoff seeds heading into the final weekend

Orlando Drop Their Sixth Straight in a Blow Out

Orlando Drop Their Sixth Straight in a Blow Out