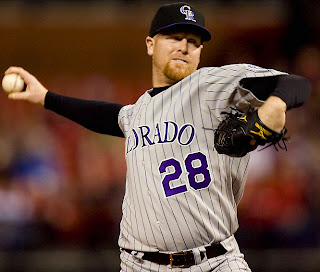 Saturday the Rockies, playing their one and only nationally televised game of the season, struggled all day against the Dodgers. The final score had the Dodgers on top 9-5.

Aaron Cook gave up three home runs. Two of them were to Manny Ramirez and the other, the big blow, was a three-run blast by Andre Either. Cook exited the game after the fourth inning, giving up five earned runs on eight hits and two walks.

The Rockies tried to crawl back into it, but as soon as the lead was cut to two runs, Alan Embree gave up three runs, two earned and failed to get an out. It was Embree's second horrible outing in as many days.

The Rockies batters are clearly in a funk, with no regular in the lineup hitting above .267, where Brad Hawpe checks in. Even Troy Tulowitzki, who started out hot, is hitting just .235. Chris Iannetta still has only one hit on the season.

Although the bats are cold, it is not a question of if, but rather when in speaking about the Rockies bats getting hot and the offense putting a bunch of runs on the board.

The problem for the Rockies lies in their pitching.

Aaron Cook, an All-Star last season who won 16 games, is struggling mightily. He could not make it out of the fourth inning on Opening Day in Arizona, then pitched fair in his second outing, but came into today looking horrible from the get go.

Cook has given up five home runs already this season. Last year he gave up 20 over the course of the whole year. Today, he only got three outs via the ground ball, two of them on a 6-4-3 double play. One out was on a sacrifice bunt and the other 11 were all from the fly ball.

Cook is a sinker ball pitcher. He lives and dies by getting ground balls. When his pitches get elevated, he gets into trouble. That was the problem today.

Several reports over the course of spring training quoted Cook as saying that he was working on mixing in a breaking ball to become a more dynamic pitcher.

It may seem like a good thing to hear about a pitcher who just won 16 games and made an appearance in the All-Star game making strides to get better. That is not the case in this situation however.

Cook's new curve ball is being thrown in the place of his change up. He is not locating it where it needs to be, and he is struggling to find the location on his other pitches after he throws the hook.

This season's fate comes down to how well the Rockies pitchers do. There are already several question marks in the starting rotation and the bullpen. Cook is thought of as possibly the most dependable pitcher that the Rockies have this season. He is a rock for the Rockies.

It is always a good thing to be improving. The Rockies would be disappointed in Cook if he wasn't working on his pitches. But in this case, Cook is who he is. He needs to stop pretending that he can add another pitch to his repertoire.

Throwing a sinker and a change-up helped him baffle hitters last year and win 16 games. There is no reason to try and fix something that isn't broken.

It is early enough for the Rockies to turn the ship in the right direction. However, Cook returning to his 2007 form is imperative for the club to have any amount of success.

Rockies rack up 15 hits against Reds

Rockies rack up 15 hits against Reds