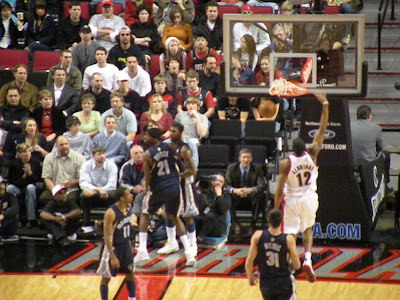 Over the course of the season, the records of the Houston Rockets and Portland Trailblazers were very similar. The Blazers checked in with a 54-28 record while Houston finished 53-29. Both records are spectacular in light of some of the trials the teams faced.

Portland spent the entire season without starting small forward Martell Webster. Webster had been showing improving defense on the perimeter but was more important in his role as a defense-stretching three-point specialist. His outside shooting forced teams to stay at home on him, which force them to help on the Blazers' post men from other quarters. 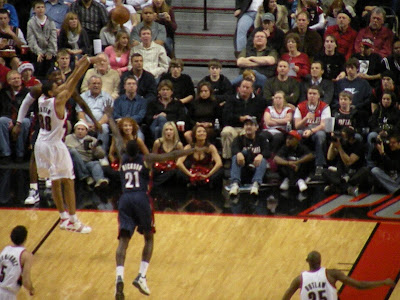 Without Webster, the starting job fell to Nicolas Batum. This was not an anticipated move since as recently as Summer League, it was felt Batum was at least two years away from being ready for even a reserve role in the NBA.

The Rockets suffered an even more key injury, losing Tracy McGrady for 47 games.

Fortunately for both teams, they are deep enough and talented enough to mask the loss of key players. In Houstons case, McGrady is obviously far more important overall than Webster and their ability to vie for a Division Championship speaks well of their talent level. They are a very, very good team.

I would go so far as to argue the one game difference in overall records in meaningless. It is a mere statistical anomaly over the course of a long season. These teams are very closely matched.

Early in the season, a Rose Quarter game illustrated just that.  Portland and Houston battled all game long with the Blazers holding five to seven point leads until they took a 10 point lead with about 10 minutes to go. But Houston took it into overtime, setting up a Brandon Roy jumper, Yao Ming and-1, and Roy miracle trey in the last 1.9 seconds. The game was so tight it saw three lead changes in that space of time. This series might be that tight as well.

However, the Blazers are a much better team now than they were at that point in the year. One of my complaints about the team at that time was they had not yet developed a "killer instinct". They would often build comfortable leads only to see those leads melt away and the game decided in the closing seconds.

That is no longer true. They now know how to apply the pressure that turns comfortable leads into blow-outs. They know how to come back on teams, even very good teams as their recent double digit win in San Antonio after being down by 18 illustrates.

In a series this close, the advantage lays with the home team. With that in mind, it is wise to look at the way teams closed the regular season. Both the Rockets and Blazers had chances to win games that would guarantee them home court. Houston was playing for a Division Title and Portland to maintain the tie-breaker over the Spurs.

Houston had a lead in Dallas but was unable to close it out, eventually falling to drop one game behind the Spurs on the last day of the season. Portland led the Nuggets all game and put the hammer down, blowing them out.

I am sure Rockets fans will correctly point out the Rockets were on the road against a team also fighting for seeding. Fair enough. In a game both teams desperately wanted...they did not get the job done. Call it the McGrady effect.

For whatever reason, recent Rockets teams have had a pattern. They are great regular season teams that find ways to lose series they should win in the playoffs. Of course, this will be their first time with Ron Artest, a talented wing defender and good scorer. He unquestionably makes them a better team.

He is also illustrative of one of the keys to the series. The Rockets are an excellent defensive team. Luis Scola is a very physical defender, Shane Battier is an above average defender, and the shot-blocking of Yao Ming can sometimes close off the paint.

They are no slouches on offense, either. They have seven guys who score over or near double figures. They can score inside or out. They rebound well. There is a reason this team won 53 games. 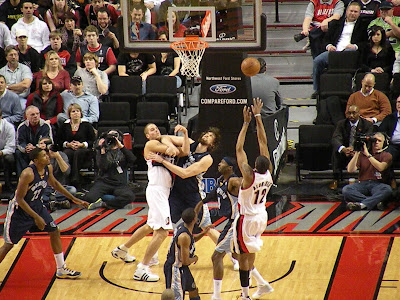 But the Blazers are pretty solid as well. It starts with their improved power forward.

LaMarcus Aldridge started the season as a good help defender who sometimes got torched by less skilled post players. As the season progressed, however, he developed his game more and more. If the All-Star game were held today and he were not on it, that would be a mistake because he has come that far this season.

He has developed a very strong post game. He is at his best on the left post where he can spin inside or come across the lane for a sweeping hook. If needed, he can step out to the perimeter for his silky smooth jump shot. 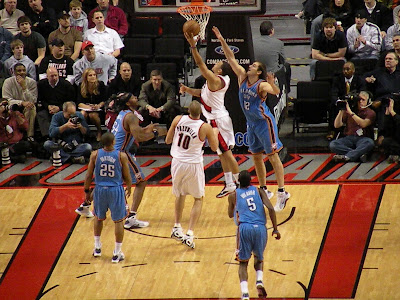 At this point, people wonder why it did not start with Brandon Roy. Anybody who does not know what Roy can do yet is just not a dedicated NBA follower. He is the engine that makes the Blazers go. He can penetrate the lane seemingly at will, either to dish for open looks or to score on hapless defenders.

His defense is all over the board. At times he is a lock-down defender but at other times he can be exploited. Fortunately for the Blazers, there is nobody on the Rockets who will be able to regularly explode on Roy from the guard position. 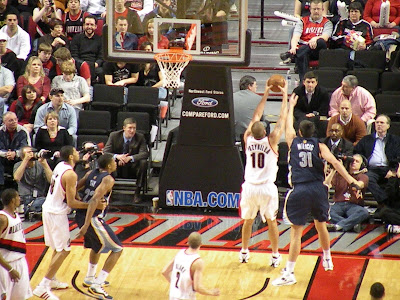 Joel Przybilla is a solid interior defender and above average rebounder. He is limited offensively, but the other starters for Portland cover up for that. Well, sometimes they do. 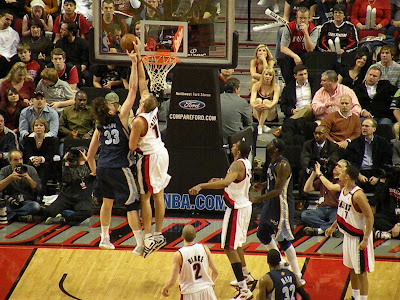 Nicolas Batum will in many ways be a key to the series. Defensively he brings it every night. He is the Blazers best on the ball defender and best help defender. He gets into the passing lanes, he tips balls, and harasses talented scorers into sub-par nights.

However, it is his offense where he needs to become more consistent. On some nights he is very aggressive. He takes the open shot, drives the lane with abandon, gets out and runs, and turns the Blazers into a deadly offensive unit that very few teams can stay with. When he is taking his shots, the Blazers are a cohesive, talented offensive unit.

The final starter is oft-maligned Steve Blake. Blake is a weak perimeter defender. Fortunately, the Rockets do not have Tony Parker or Chris Paul. Aaron Brooks is a fine player but he is not going to torch the Blazers night after night, thus covering one weakness for the Blazers. Offensively, Blake is a perfect fit.

He has gotten better about creating havoc for opposing defenses by getting into the lane more often and is able to play off Roy's penetrations by staying home and hitting the open three. He is generally good about not turning the ball over. He is a very steady player who can score when needed.

Off the bench the Blazers bring a lot of firepower. Rudy Fernandez and Sergio Rodriguez have excellent chemistry. Rodriguez finds Fernandez for so many open looks that Fernandez set the Rookie record for most threes in a season. Defensively they can be exploited as they focus too much on playing the passing lanes and sometimes forget to defend their man. Still, they should outscore former Blazer Von Wafer and Kyle Lowry. 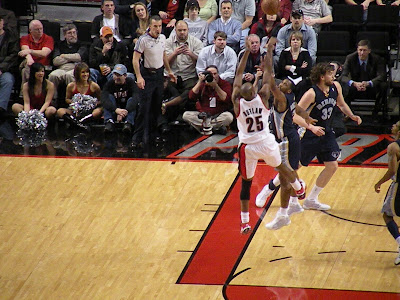 It is in Travis Outlaw that the Blazers really shine. Outlaw has been overlooked by the rest of the NBA but should have been considered both this year and last for the Sixth Man of the Year.

Defensively, he is an enigma. At times he is dominating. His agility and length can cause problems for even a Kobe Bryant or LeBron James. At other times he gets lit up by D-League scrubs. He is at his best coming from off the ball to block shots or getting spectacular blocks in transition.

It is on offense that he really shines. He has improved his shooting from deep but is at his best slashing to the hoop for highlight reel dunks or using his jab step and incredible leaping ability to create clean looks at the hoop, often against double teams. He gets so high so quick that defenders not named Dwayne Wade have no hope of reasonably contesting his shot.

Additionally, if he is not the Blazers best fourth quarter player then he is at least in the conversation. When you consider the fact the Blazers have Brandon Roy playing for them, that is quite a statement but one Blazer fans recognize.

Again and again Outlaw has provided a spark for the Blazers. He explodes in huge bursts, often racking up double digit points in two or three minute spans. The more the Blazers need  a big fourth quarter, the more likely they are to see Outlaw turn into "Super-Trout"*.

All of this does not even address rookie enigma Greg Oden. He can be awe-inspiring and game changing or in and out of the game so quick you almost do not even notice he was there.

Defensively he can be outstanding. When he is feeling it, he is a premier shot-blocker. He has developed into a well-above average rebounder. He has regained his quickness and agility to the point where it is not as big of a mismatch as you would suspect when he gets caught on the perimeter. He moves his feet quick enough to stay with all but the quickest of players. It is offensively where his game is unsteady.

Oden is somewhat limited. He has an increasing repertoire of post moves but for the most part he wants to be Shaquille O'Neal. He likes to back people down and run over them. Unfortunately for Oden, the offensive fouls O'Neal committed for years that were called on the defender actually get called on Oden.

The playoffs should help that. For whatever reason, playoffs see things that were fouls in the regular season become "no-calls". This helps guys like Bruce Bowen, Luis Scola, Ron Artest, Joel Przybilla, and Greg Oden. Yeah, I know Bowen isn't in this series, but he illustrates the points.

When players are allowed to be more physical, it benefits players who have the ability and desire to be more aggressive. That means Oden should see fewer calls against him which will lead to his being a greater presence in the series.

Overall, this series should be very close and entertaining. I would not even be surprised to see both teams get a game on the opponents home floor. But in the end, the improvement the Blazers have shown combined with their overall slightly higher talent level and having the home court will make all the difference. Portland should win in either five or seven games.

*(Outlaw's nickname is "Trout" for T-Outlaw" and when he has one of his patented explosions some people refer to him as Super-Trout).