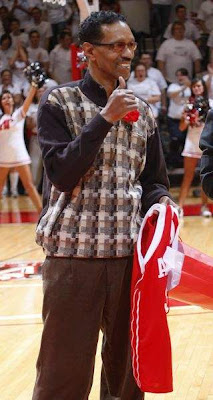 James “Fly” Williams had game—lots and lots of game.

Austin Peay State University recently honored their favorite son and retired Williams’ jersey on Feb. 5 in a ceremony at the Governor’s Dunn Center.

Williams was born in Brooklyn and learned the game on the streets. He was dominant at Madison High School, but really earned his stripes on the playground with the likes of World B. Free and Earl “the Goat” Manigault. By all accounts, Fly would play anywhere, anytime. He is still considered one of the best “streetballers” of all time.

After Williams completed high school, he was recruited by Austin Peay State University(APSU) assistant Leonard Hamilton, who is now the head coach at Florida State. When Fly, who earned his nickname for his flamboyant style of dress, arrived in Clarksville, TN sporting a floppy hat and a big afro, both he and the locals had to make a few adjustments.

"I was flamboyant; it was the style. Clyde (Walt Frazier) had Clyde, and I was Fly. I was Fly before Curtis Mayfield was Super Fly,” Williams once said.

Anxious to put his program on the national basketball map, Williams did not disappoint the Austin Peay faithful. In his first year, he averaged 29.4 points-per-game and led the Governors to the Big Dance. With Fly scoring 26 points, APSU defeated Jacksonville in the opening round, but lost to perennial power Kentucky in the next.

Williams's popularity soared much like his game. Fans lined up to get a seat in ASPU’s "The Little Red Barn," and Williams kept scoring—27.5 points-per in his second season.

He again led the Governors to the conference championship and NCAA tournament, though they were crushed by Notre Dame 108-66 in the opening round. But Williams put up 26 points on the national stage. 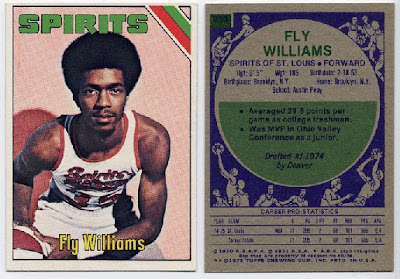 It wasn’t all about offense. According to Hamilton, Fly won the trophy awarded to the Governor who took the most charges both years he played at APSU.

The Fly left college after his second season to pursue a career in pro ball with a gentle nudge from the APSU hierarchy, who made certain claims regarding his “eligibility.”
He was drafted by Denver in the first round of the 1974 American Basketball Association (ABA) draft and his rights were eventually sold to the Spirits of St. Louis.

Williams’ off-court career can be described as pockmarked, with words like alcohol, drugs, and bad temper working their way into the mix. Addiction and prison were also on Fly’s agenda, and his basketball career was terminated for good when he was shot (not the first or last time, as bad luck would have it) in a robbery attempt.

Today, Williams, 55, works with kids in his native Brooklyn. The ceremony last week to retire his jersey was so much fun that Fly ended up in a local hospital for a few days, but doctors expect him to recover fully and return home shortly. He is currently resting, and tests regarding major illnesses have turned up negative. 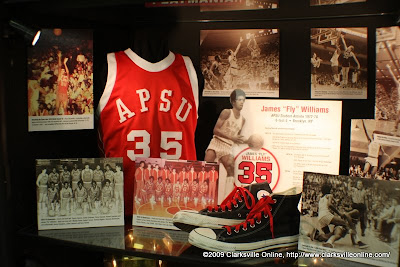 But the jersey ceremony wasn’t Fly’s first return to Clarkesville. During an earlier visit, he and APSU
“If that’s true,” Fly said, “why is it named after somebody else?”

Ultimately, Fly Williams will be best remembered for a very clever and funny chant that would have the NCAA higher-ups in Kansas City squirming in their starched shirts and suits were it popular today. During Fly’s playing days, the APSU faithful would chant at length: