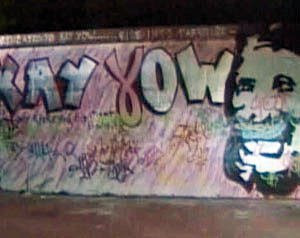 Never mind a couple college kids banging each other during a basketball game, the North Carolina – N.C. State rivalry took an exceptionally ugly turn after the game on Saturday night.

Unbelievably, a mural honoring Kay Yow, the Wolfpack basketball coach who lost a 20-year battle to breast cancer on Jan. 24, was defaced after last weekend's UNC v. N.C. State game. The mural is located in N.C. State’s “free expression tunnel” which is often the sight of various pranks by rival schools. Prior to this year’s N.C. State v. UNC football game, a group of Carolina students painted the entire tunnel sky blue with various harmless messages like “Go Heels!”

But this was entirely different.

A blue mustache and the words "cancer rules" and an obscenity were painted on the art work that depicted a portrait of Yow against a pink background.

Needless to say, Wolfpack Nation is in an uproar right along with every decent, morally centered human being on plant Earth. What kind of moron does this? What kind of twisted mind thinks this is funny?

Obviously, folks in Raleigh are pointing at Chapel Hill, and the Carolina blue crowd is doing their best to apologize, hoping it wasn’t a Carolina student or alum who is ultimately responsible. 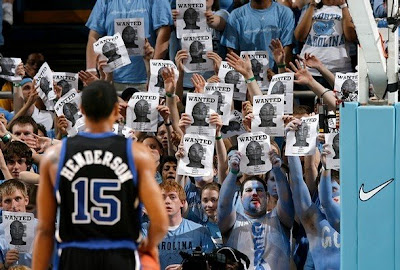 Two issues come into play here: a) the future of the tunnel, which has been the subject of previous controversy, and b) the vehement nature of fans – both directly and indirectly affiliated with a school.

After Saturday’s UNC basketball win, the mural was painted in the same place where racist graffiti was found written about Barack Obama during the presidential campaign.

The Obama incident prompted the University of North Carolina system to revisit student codes of conduct as related to hate crimes, and N.C. State Chancellor James Oblinger also formed a cultural task force to talk about the tunnel.

“We've looked at that question (and) we've looked at whether or not we should keep the tunnel in place,” said Tom Stafford, vice-chancellor at N.C. State.

The committee was inclined to say yes.

“If you shut the tunnel down, the people who feel this way will still have those feelings and thoughts inside," Stafford said.

As a result, the N.C. State University Student Senate passed the Free Expression Tunnel Response Act after the Obama incident. The act requires campus police to arrest and prosecute the perpetrators. It is not known yet if N.C. State or Raleigh police have any suspects in the Yow debacle, but the tunnel does have security cameras at both ends. 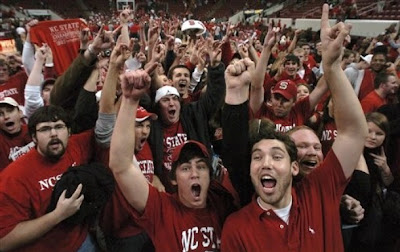 This, of course, has locals calling for the tunnel to be closed. One letter in the Raleigh News & Observer titled “Take out the Tunnel” concluded, “It's senseless that these vandals are given free rein to write hateful and destructive things and deface the sincere worthy feelings that are expressed there. It's a cowardly act and needs to be stopped, and I think the only way to do so is to encourage free expression and free speech in a fully visible forum, and not under the cover of darkness.”

The writer has a point, but then again how does one balance it with the right free expression and the first amendment among other things. Never mind that this senseless act is directly related to cancer in a “tobacco state” with a basketball tradition located in what is happily referred to as tobacco road. While Yow didn’t die of lung cancer, the relationship between the carcinogen and the disease is ironic at best.

Not long after the vandalism was discovered, the finger pointing started. The N.C. State folks put the cross hairs squarely on UNC – after all, the mustache painted on Yow was Carolina Blue. The UNC crowd pushed back best they could asking for proof. Nobody from the Tar Heel side of the aisle has publicly suggested this was done by a Wolfpack fan determined to make UNC look bad, but one has to figure it has crossed more than one mind used to the back-and-forth of bitter in-state rivalries.

Yes, the animosity runs that deep.

Which brings us to our final point? There are three logical hypothesis regarding the “who did this?” question: 1) some incredibly mean, crazy bastard unaffiliated with either school, 2) somebody affiliated with one of the schools, with UNC affiliates holding a clear and obvious lead and 3) somebody who fits the first profile and has “adopted” the University of North Carolina as their cause to fandom. 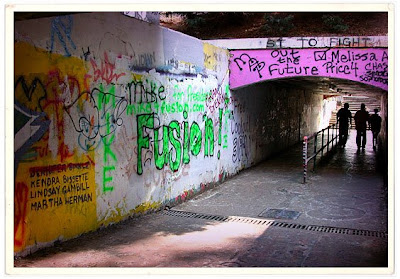 We know how loyal students, grads, and parents of students can be. We’ve seen the loyalty move mountains. But we have also (recently) seen a number of cases where fans with no affiliation whatsoever become passionately involved with a school’s sports programs.

One quick example: We occasionally attend a Virginia game in Charlottesville. A few seats down from where we are fortunate to sit is a fan who stands the entire game and yells at the officials, the players, the coaches. Not a play unfolds where this zealous dude doesn’t comment upon or question what has taken place. Frankly, it's mildly annoying.

Interestingly, by all accounts from neighboring seat mates, this fellow is not, and has never been, a student at Virginia nor does he have children or relatives who attend or have attended. By those same accounts, this bundle of Wahoo energy is a graduate of East Carolina.

Now we aren’t bustin’ on the Pirates, just simply pointing out that the source of this incredible zeal and loyalty comes from somewhere other than the campus of the University of Virginia. This particular fellow reminds one more of a fan of an NFL team than an ACC school. There’s a difference, and if you’ve been to an NFL game recently, you know all about it.

So, were we asked to opine on who defiled the Yow mural, T.A.H. would weigh in thusly.

At first blush, we though it might be a prank committed by a couple of drunk/messed up UNC students. But even completely trashed, most normally emotionally-centered kids would have seen the inherent evil of the deed. Not that there is very much clear thinking going on at 3 a.m., but surely one of them would have pulled the plug somewhere between Chapel Hill and Raleigh – unless, of course, the graffiti was done by a lone offender. 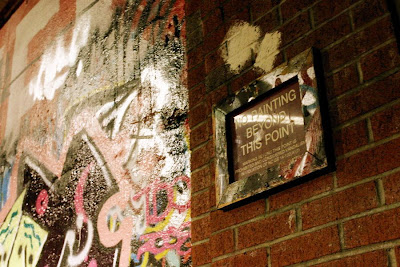 But, we’re gonna stick with the “drunk/messed up” part, and guess this was done by a non-student/non-alum – one of those crazy, wild, over-zealous fans who has adopted the school and now believes the rivalry supersedes common decency and fair play. Down in North Carolina, those types all over the place as the Duke/North Carolina/N.C. State loyalties run deep. These particular knuckleheads just had some gas in the car, an incredibly stupid idea, and some paint.

We could be wrong, but that’s our story, and (for now) we’re sticking to it.