November 4, 1972 was the last LSU Football game I attended with my father.  His favorite LSU slogan, was '08, '58 and next year, in reference to the only two mythical national championship seasons.  Unfortunately, he died in in 1976 during a slump in Tiger history.  I was a senior in high school anxiously awaiting my matriculation to LSU the next year as a freshman.

My father was an LSU season ticket holder with six children—four daughters and two sons. The boys were the youngest in the family.  He would take one of us to the game when my mother chose not to go, which was often.

I remember those games against Texas A&M, Rice, and SEC opponents. In the mid sixties and the upper deck seats that one my close friends and I would sit, when our fathers would go together and sit in the "good seats" on the five yard line of the West side.

It was always a privilege to be able to sit in the good seats.  One of the interesting time periods occurred when LSU had kicker, Mark Lumpkin.  The score board allowed writing on the bottom, such as who ran, how far, and of course the point after touchdown.  It was always written in abbreviated English.  "Lumpkin PAT Kick Good".  My friend and I would always laugh and change the words, such as "Kick Lumpkin, PAT No Good." Or, "Pat Mark, Kick Good."

We thought we were quite creative.

As the years passed and the bitterness toward Ole Miss increased, especially with Archie Manning as Quarterback, my favorite games were the LSU-Ole Miss games.  I got to see the shellacking of Ole Miss when LSU beat them 61-17, with Archie in a cast.  Tommy Casanova, Mike Anderson, and others were my heroes.

I was at the Auburn game when we won by one point after George Bevan blocked the extra point to assure a 21-20 victory.  I missed that play, because my father's name was called out over the speakers. Having the same name as my father, I went to see what happened with my brother. My sister, a LSU student, had a pin from a corsage stick in her chest and had to receive first aid.  I was sorry to miss the end of that game.

LSU played poorly for nearly the entire game.  Even with Bert Jones at quarterback; the Rebels played inspired football with the lead 16-10 in the fourth quarter.  LSU made one last defensive stand with about three minutes to go in the game. Ole Miss punted and LSU received the ball at about their own 20 yard line.

The fans cheered to pump up the players and Jones confidently trotted to the huddle after conferring with Coach Mac. The drive started poorly with one fourth-down conversion required to continue the drive. The seconds ticked away and every fan was standing, including my Dad, who generally would rather sit and watch, nipping at his "snake bite" medicine (a convenient way to justify bringing bourbon into the stadium.)

The Tigers drove to about the ten yard line right in front of our "good seats" on the Southern side of the West lower section.  Seconds were ticking away and the Tigers came to the line of scrimmage with four seconds remaining.  The clock was stopped.

Jones received the snap. He took a short drop and rifled a pass to Jimmy Ledoux whom was wide open in the end zone.  He received the pass in his belly as the crowd noise began to rise.  The crowd gasped at this last hope—only to see him drop the pass with everyone thinking there was no more time in the game.  The Rebel defense jumped in jubilation knowing that this was the last play and they beat the mighty top ten and bitter rival, LSU.  But wait.

LSU had one play, one last gasp to try to win the game. Bert Jones came to the line and had a confident look in his gait. Brad Davis lined up at tailback. Jones received the snap took a seven step drop, looked, saw no one open and threw the ball to Davis, who ran in the flat toward the East side of the field. Davis was covered. He caught the ball over his left shoulder and raced to the corner of the front of the end zone. It was close, as he was tackled and fell forward.

I couldn't tell you if he scored by watching. The crowd noise was deafening as the referee on the sideline had a perfect view and lifted his hands signaling "Touchdown!"

The three minute march to glory was a perfect ending as the crowd rocked the stadium at a level deafening as though the stadium held 92,000 fans, which is the current capacity. The Rebels were in shock. We were screaming and hugging and shouting to each other in the stands. Yet, we had to kick the PAT to win. We were only tied.

Rusty Jackson came on the field and the crowd became quite.  He kicked in the traditional way, not a soccer style. With his head down; the snap and hold were perfect, and he drilled the extra point.  "Jackson PAT kick good"  It was pandemonium.

The crowd remained after the game for thirty minutes standing and cheering, including my father. There was no rush to the field. Shocked fans. Shocked Rebel players. LSU football players running all over jumping on each other.

The storied rivalry added another chapter to its history.

For several years after the game a sign was placed between the bordering states on the Mississippi side.  "You are now entering Mississippi.  Please set your clock back four seconds."

Older fans still allege that the timekeeper was an LSU fan.  Articles ran for weeks on how the seconds measured in tenths and perhaps it was only one tenth of a second, yet enough to snap the ball.

There have been other exciting games attended and many stories to tell.  Yet, I would never attend another with my father.  Certainly, it was the most exciting moment we ever shared together.  As a true Tiger fan, I taught my sons the expression, "08, '58 and next year."

It does not have the same ring to it, but the first thoughts of mine after attending the 2003 BCS game with my three sons, after the final seconds ticked off, were of my father—that Ole Miss game and what he would have thought.  It made that hug of my youngest son even more special. 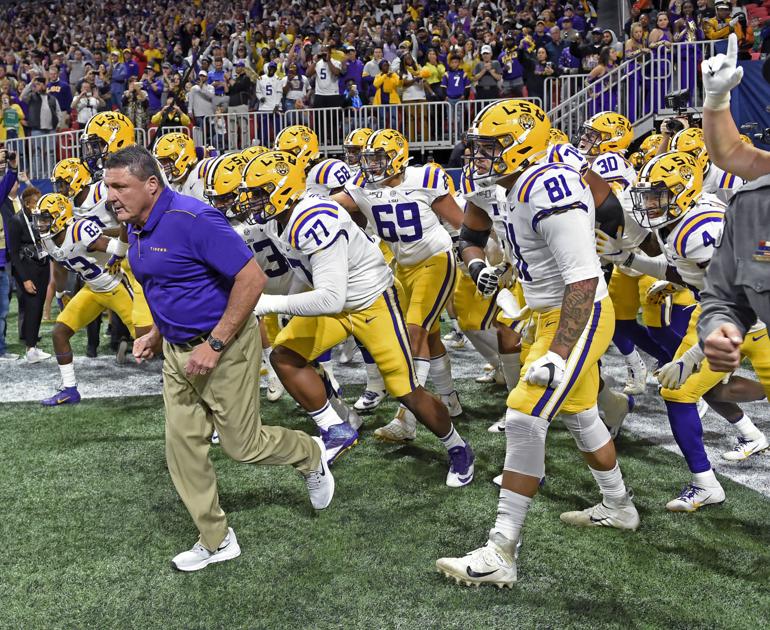 Scott Rabalais
via The Advocate