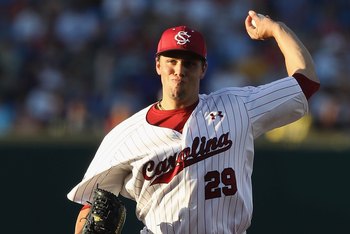 With the spacious outfields of TD Ameritrade Park and the new toned-down bats in college baseball, it has never been a better time to be a pitcher at the College World Series.

Long gone are the days of "gorilla ball" where all nine hitters in the lineup had a legitimate chance of hitting a home run at any time.

Case in point, the final score of the 1998 College World Series series championship game between USC and Arizona State was 21-14.

This year's field certainly has the pitchers to do that. I can't remember a year where there has been more pitching talent in Omaha. 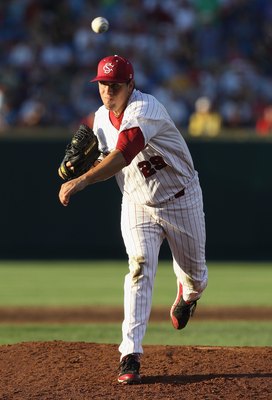 Roth isn't going to make scouts gush or light up radar guns, but he is the best pitcher in the College World Series.

Last year, Roth had his best game of the season in the College World Series championship against UCLA. He took that momentum and parlayed it into an outstanding 2011 season.

If you include the stats gained from his start Sunday against Texas A&M, Roth is 13-3 with a 0.97 ERA. Opponents are hitting .210 against him.

Those numbers even more impressive when you consider Roth's repertoire. Roth doesn't throw particularly hard or strike very many guys out. He is a pitcher in the truest sense of the word.

Hultzen was the second overall selection in this year's MLB draft and it's easy to see why. Hultzen is a lefty that doesn't throw all that hard, but has a power repertoire in that he can physically dominate hitters.

Maybe the most impressive thing about Hultzen's success is that many times, he is the team's DH even on the days he starts. I can only imagine how much crisper he can be when he doesn't have to worry as much about hitting and running the bases. 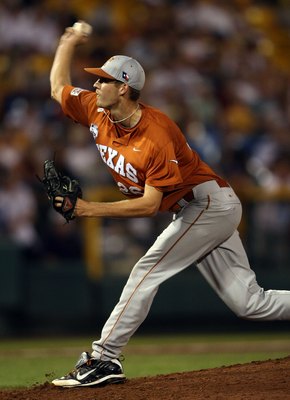 Even though Jungmann's Longhorns were eliminated on Monday afternoon, his spot among the best pitchers in the entire field was set.

You could make a case that he is the most dominant pitcher in the country. Unlike Roth and much in the same way as Hultzen, he is a power pitcher that can litter a scorecard with Ks.

Jungmann went 13-3 on the season with a 1.60 ERA. That ERA is a little misleading because it got bloated thanks to his last start on Saturday against Florida.

Jungmann was the 12th overall selection in this year's MLB Draft and he profiles as someone who will be a solid starter in a Major League rotation some day.

Of all pitchers in the entire field, Gray may have the best pure fastball. At times, his heater can reach 95 or 96 miles per hour.

Coupled with his sharp twelve-to-six curveball, the wide range of speed and location he can give you from the mound is almost unfair.

He struggled in his first start of the College World Series against North Carolina, but those types of starts have been few and far between for him. Gray is 12-3 with a 2.12 ERA on the season.

The best news for Gray on a personal level is that Vanderbilt survived his rough start on Saturday and are still playing in Omaha. He will be given a chance to redeem himself and get back to pitching the way he has all season.

Michael Wacha was forced to be A&M's ace when incumbent ace John Stilson went down with a season-ending injury. To use a cliche, he has really taken the bull by the horns.

Wacha won two games for the Aggies in five days in their regional in College Station and then won the super regional-clinching game against Florida State and their high-powered offense.

Wacha is a big-time prospect in next year's draft class. His performance during this postseason has done little to make scouts think otherwise.

Hudson Randall has been a huge part of a Florida Gators pitching staff that tore through lineup after lineup this season.

Randall is a lean, lanky hurler that loves to pound the strike zone. More to the point, he has only allowed 12 walks in his 116.2 innings of work this season.

Randall has a record of 11-3 with a 2.24 ERA. The only reason Randall isn't higher on this list is that he does throw a lot of strikes and when he faces elite offenses, he is going to get hit a little. He doesn't miss many bats and that's something he might have to tweak if he is going to be successful at the next level.

Karsten Whitson is the other co-ace of the Florida staff. At this time last year, Whitson was toying with the idea of beginning his professional baseball career. He was drafted ninth overall by the San Diego Padres, but he spurned all that money to play ball for the Gators.

There will always be speculation as to whether or not he should have signed, but with how well he is pitching and how well his team is playing, it looks like he made a great decision.

This duo of pitchers is a big reason why Florida is considered a favorite to win it all.

Will Roberts is likely one of the more overshadowed dominant pitchers in recent memory. That can happen when you are behind Danny Hultzen in the rotation.

Roberts biggest achievement on the season was his perfect game against George Washington on March 29. It was only the 19th perfect game in NCAA DI history and the first since 2002.

Having two guys as good as Hultzen and Roberts is a huge advantage for the Cavaliers and is a big part of their being the top ranked team in the nation.

Like his teammate Kent Emanuel that shut down the Texas Longhorns Monday afternoon, Patrick Johnson is a good pitcher on a good pitching staff at North Carolina that goes somewhat unnoticed.

The entire Tar Heels team has gone pretty much unnoticed thanks to the modest expectations they had coming into the season.

If Johnson pitches like he has this season deep into Omaha, he won't be unnoticed for long.

If the Tar Heels are to make a run to the championship of the College World Series, they will need Johnson to continue pitching like he has all season.

Much like Will Roberts at Virginia, Grayson Garvin has been hidden behind Sonny Gray at Vanderbilt even though he is putting up great numbers.

The duo of Gray and Garvin puts Vanderbilt in the same breath as Florida and Virginia as teams that could potentially win the national title.