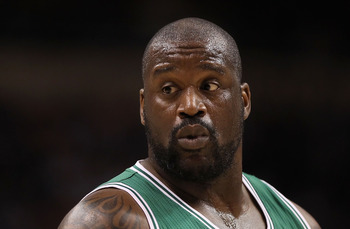 You can't replace the Diesel, but you can certainly try.Christian Petersen/Getty Images

The 2011 NBA draft is rapidly approaching, and for the Boston Celtics, replacing Shaquille O'Neal will be their No. 1 priority.

And every other delicious food he had to restrict himself from (basically, this) during his entertaining as hell 19 years in the NBA.

But enough about the Diesel. The Boston Celtics are nearing the dreaded 2012 season—the season where playoff runs and championship discussions will be thrown out the window. After this season, Danny Ainge and Doc Rivers are expected to have three players left on the roster: Paul Pierce, Rajon Rondo and Avery Bradley.

It is certainly possible that Delonte West, Jeff Green and Glen "Big Baby" Davis join that group, but it isn't a given. The Celtics will have to weigh the pros and the cons of each and carefully decide which way they want to turn. Do they want to maintain their identity as a defense-first, stretched offense, or do they want to go the other way and play "small ball?"

If the Celtics sign Green, West and Davis, they definitely would have the pieces needed for a smaller lineup, but either way, the Celtics are going to have to find a center.

With Jermaine O'Neal their only remaining center (after Nenad Krstic jumped ship to Russia), the Celtics are in dire need of some more big bodies—preferably young and athletic ones.

There could be some help in free agency, but for now, let's look at five players in the NBA draft that the Boston Celtics will look at to replace the Big AARP, Shaquille O'Neal.

Johnson is not a center, but he is an extremely athletic player who could help the Celtics down the road.

Especially with the additions of LeBron James, Chris Bosh, Dwyane Wade, Carmelo Anthony and Amar'e Stoudemire to the playoff picture, the Celtics must get some athletic bigs who can actually keep up with those guys.

Johnson's athleticism masks his biggest problem: He is underweight and will get crushed down low by true centers like Dwight Howard and Joakim Noah.

Considering he scored a majority of his buckets on the fast break or on dunks, Johnson's name has been falling down mock drafts for weeks now. A trendy pick to go to the Celtics at No. 25, Johnson is now expected to fall into the second round.

Regardless, Johnson could bring the Celtics a similar presence that Serge Ibaka brings to the Oklahoma City Thunder. Obviously, Johnson is not nearly as good of a shot-blocker, but if he works with Kevin Garnett, "anything is possible."

Thompson is definitely a reach for the Celtics, which is why I dropped him to No. 4, but I can't help but feel that he is the exact player Boston is looking for.

He has immense jumping ability (something Boston has lacked for years), a wingspan which rivals that of a condor and a tremendous youthful energy that would do the Celtics wonders.

The real question for Boston is whether they want to contend for a championship this season or whether they want to "rip it up" and start over. Considering the return of Rivers, Garnett and Ray Allen, I can pretty safely assume that the Celtics are once again going all in.

If they are going to attempt one more run for a Larry O'Brien Trophy, they would be wise to try to trade up for this stud. Tristan will probably fall somewhere in the early teens, which will keep his cost low, but unlike a couple of players on this list, he will be able to help right away.

Faried is one of the very few players in this draft who are considered "safe" picks.

You know what you are going to get.

You will get rebounding, and lots of it. You will get energy, toughness and aggressiveness that could only be exceeded by the maniacal Kevin Garnett. Maybe most importantly, you would get defense.

Faried is the perfect team player. He will never take a bad shot, and he will do all the dirty work. Eventually, he can become the Dennis Rodman to his teammates' Michael Jordan and Scottie Pippen. He is that good.

Obviously, with a comparison to Rodman, Kenneth isn't going to wow you with his scoring ability, but he can definitely be a starter on a championship team.

I have a very strong feeling that he will be one of those players you love because he is on your team but you would hate playing against (a la Joakim Noah/Anderson Varejao).

The Celtics would need to trade up a few spots to get him unless Santa gives Danny Ainge an early Christmas gift. I really think Faried would be an unbelievable addition to the team because he can contribute right away, and more importantly, he can forge a bond with Rajon Rondo (similar to the one that Rondo and Perkins shared) for years to come.

This is one big dude.

If we are talking about replacing Diesel, Vucevic is one of two players available who are even within 100 pounds of him. A true center, Nikola will be very highly coveted by many teams, because there are about 20 teams that need a true center right now.

The reason that Vucevic is going to get drafted too early is the same reason that Samuel Dalembert is somehow finagling his way into a $25 million contract (unless the lockout interferes).

Following the Mavericks' blueprint with Tyson Chandler, NBA teams are searching far and wide for their version of the Dallas big man.

The problem with Vucevic is that he doesn't even have one-tenth the amount of talent of Tyson Chandler. It doesn't make him a bad player, but he doesn't compare favorably with top centers if we are discussing athleticism and ability to run the fast break (which is huge with Rondo).

Despite this, Nikola will probably be taken by the time pick No. 25 rolls around.

If he manages to still be around, expect the Celtics not to hesitate. He is precisely what Boston is looking for: He can rebound, take up space down low and is an underrated offensive player with Kevin Garnett-type range on his jumper.

The story is always the same with Jeremy Tyler. He has all the talent in the world, but he just can't get his head on straight.

He is too immature. He's never going to put in the amount of time necessary to become a legitimate franchise player.

Here is a kid who, at the tender age of 17, was already considered one of the top centers in the country. So then what is the problem? The problem is that he is in the same exact position now as he was then.

Jeremy went to Israel following high school, but after a miserable few months, he quit the Maccabi team in the middle of the season. Instead of coming back to the US, Tyler went to Tokyo in an attempt to perfect his craft.

So here we are. The Celtics have just lost one of the biggest personalities in all of sports, a man so talented that people say he should have won more rings even though he won four. The amount of dominance that Shaq displayed in his day was truly remarkable.

But people will never forgive O'Neal—fans think he took the game too lightly, that he felt he was so talented that he didn't need to get better. He was too focused on the "Hollywood" side of the game.

Next Thursday night, the Celtics will hopefully have a chance to draft someone who has the talent to at least try to fill those mighty big shoes—a kid similar to Shaq. He's too immature. He doesn't have the desire to dominate; he just wants to be seen as the best. He thinks he is so good that all he has to do is play the games.

Everyone else: Five Percent

Thank you for reading! Please leave me your thoughts, complaints or just a quick "nice job" in the comments section below. What do YOU think?