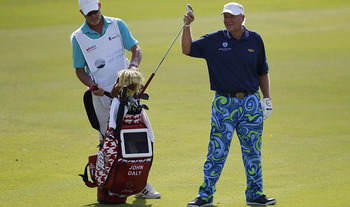 The clothes make the man.

If that saying is true, there are a fair amount of golfers in a world of hurt.

Today's players obviously noted that golf clothes got a little boring in the 1990's. They are bound to not commit the same fashion mistakes.

Unfortunately, I am not sure if the clothes they are wearing look any better. Actually, some of the outfits look worse, much worse. 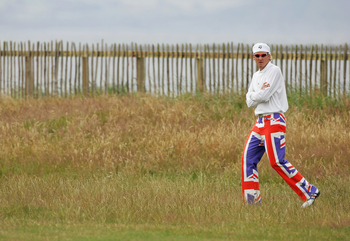 I have no idea what Ian Poulter was thinking when he decided to wear these pants.

Granted, he wore them during the 2004 Open Championship at Royal Troon. That still is not an acceptable excuse in my eyes.

There is a place for flags, and that place would be a flag pole. Ian's legs to do not count as flag poles. 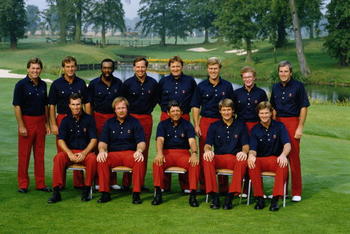 I am not sure why the U.S. Ryder Cup team always finds the most hideous pants they can find.

It is a reoccuring theme. It is also a nightmare that needs to stop.

These pants come straight out of 1985. And trust me, you can tell they are not from this era. While they may be a major color of the U.S.A, they look horrendous. 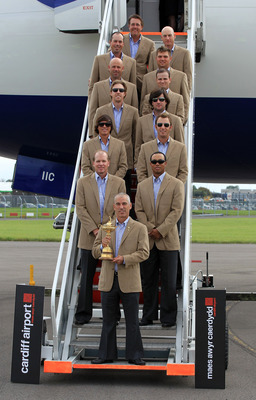 Judging by the bell-bottom pants in this picture, you could have fooled me. 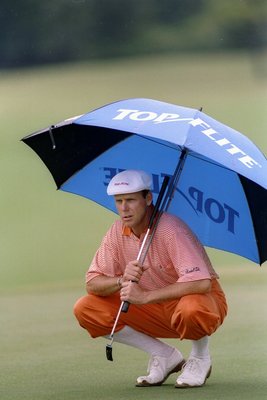 Understand, I have never been a fan of the plus-four knickers. While they may have been popular ages ago, they simply look goofy.

Payne Stewart wore them to stand out, a respectable reason.

What is not respectable is that color orange. I hope Rickie Fowler is reading. 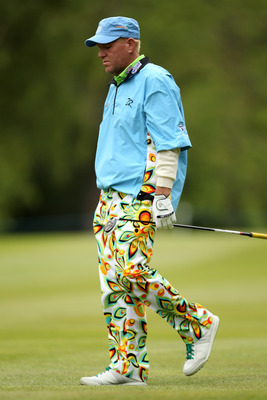 I could probably post each pair of pants that John Daly wears in this article. There is not a pair of pants he wears that are anywhere near attractive.

But I did not want to subject people to one picture of Daly after the next so I picked the pants I find to be the worst.

I can deal with the plaids and argyles. Flowers, on the hand, have no place on golf pants.

Again with the flag on a pair of pants!

This time the offender is Felipe Aguilar of Chile. While it is rare to have a Chilean on tour, there are subtle, more effective ways to show his pride. 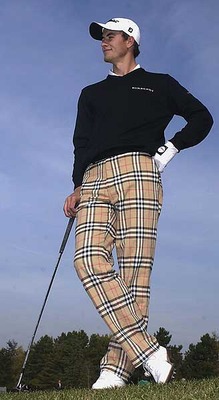 France is a place known for its fashion. So I like Adam Scott's attempt at being fashionable.

The full-length Burberry plaid trousers are not exactly ground-breaking in the fashion industry. In fact, they are down right grotesque. 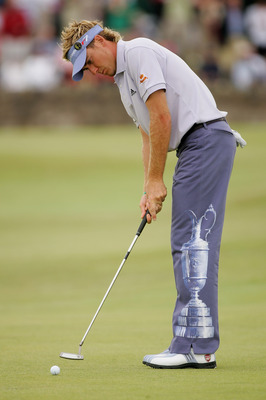 Another Open Championship, another pair of ugly pants.

While Poulter did not make the same mistake twice, the Claret Jug image down the leg of his pants are not much better.

But I guess if you can't actually win a Claret Jug, the next best thing is putting one on your pants! 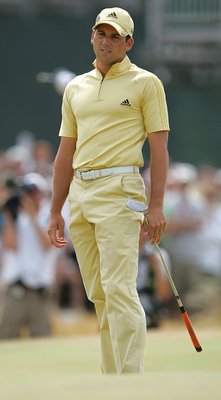 I turned on the television for the 2006 British Open and soon found myself watching a canary play golf.

Actually, it was just Sergio Garcia. No idea why he decided to wear a full canary yellow outfit, but he did.

All I can say is awful. Simply awful. 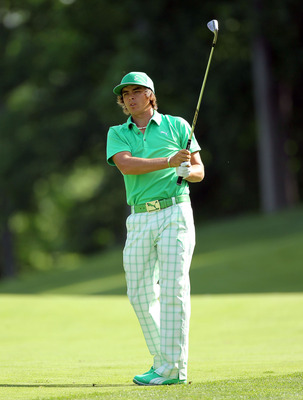 This outfit comes right behind Sergio's canary duds on the ugly scale.

I do not like your Oklahoma State orange pants. What on earth makes you think people would want to want you play golf dressed in mint green?