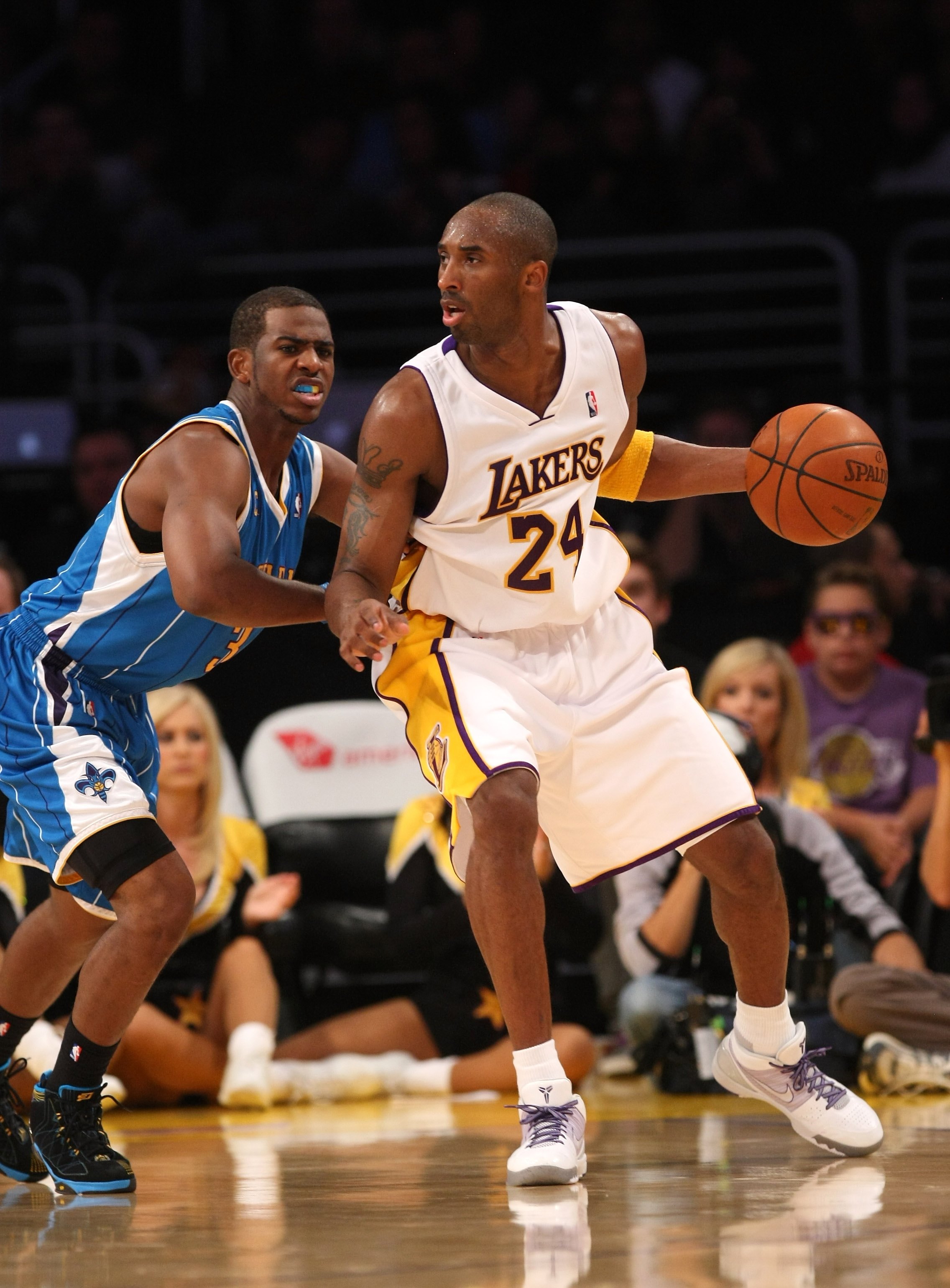 It took until the completion of the 1,230th and last game of the 2011 NBA season, but we finally know the matchups for the first round of the upcoming playoffs.

For fans of the Los Angeles Lakers, the last day of the season couldn't have gone any better. Their team secured the second seed in the conference, avoided a possible second-round matchup with the athletic Thunder and drew what is their most favorable possible first-round opponent in the depleted New Orleans Hornets.

All is not lost for the Hornets, however (even though their 0-4 record against the Lakers in the regular season appears to make it so), as their superstar Chris Paul just happens to play the position that has routinely punished the Lakers for two to three years now.

How do the teams compare elsewhere on their rosters? Just how big is the Hornets' advantage at point guard? Can the Hornets deal with the Lakers' size? Or Kobe?

Feel free to comment whether you agree or disagree. 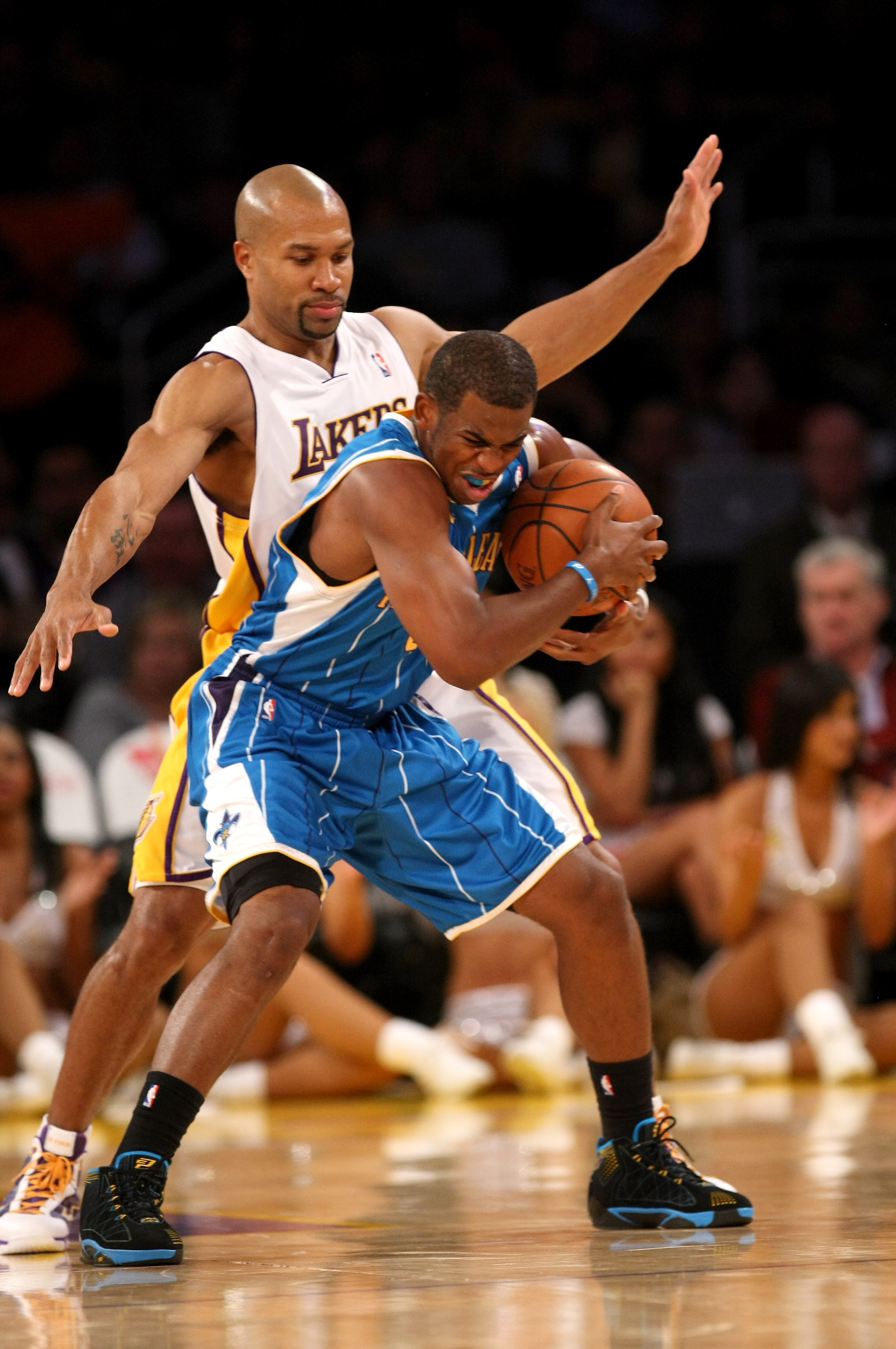 Even with the unquantifiable value of all the intangibles Fisher brings to the Lakers this matchup is still a landslide victory for the Hornets. Chris Paul is by any measure at the very least a top-three point guard in the NBA. The Hornets will use Paul to mercilessly attack the Lakers with pick-and-roll and pick-and-pop sets.

The Lakers will try to funnel Paul into their waiting big men and then quickly rotate out to the Hornets wings. The Hornets repeatedly run the exact same plays out of their half-court set but execute them with such precision that it takes a total team effort on defense to cause them problems. Paul might end up being guarded by Kobe for parts of the series in an attempt to slow him down.

Saying that Fisher has lost a step is like saying that Ben Johnson lost a step in 1989. What he will do is not be intimidated, lead with the best of them, play his heart out and hit some big shots. Unfortunately, Paul will drive by him at will with either hand and consistently create room for a steady stream of high percentage shots.

Huge advantage for the Hornets 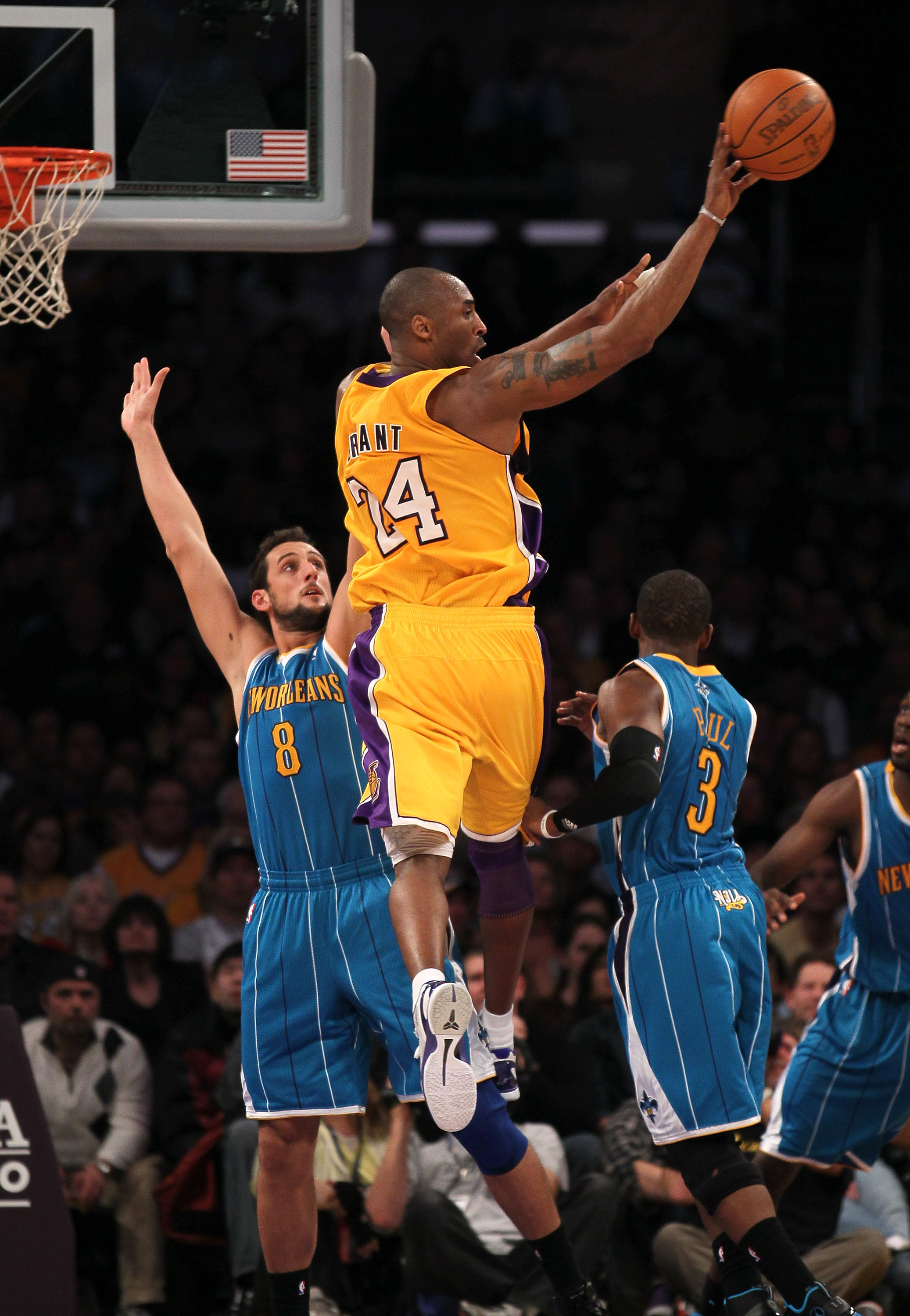 I have actually been wondering if the Hornets will be able to afford to start Belinelli. As much as they need his shooting ability, there is absolutely no way he can guard Kobe. The problem is that if Ariza guards Kobe then either Paul or Belinelli would have to guard Artest. He would post either of them up and wear them down all game long.

The other option is to have CP3 guard the Black Mamba. If the Hornets deem that they absolutely need to have Marco's shooting on the floor, then this might be their best option. Since Ariza is the only player on their roster that can even remotely bother Kobe, they will likely have to configure a lineup that allows the two to faceoff without sacrificing Belinelli to Artest, or risk getting swept. Whether that means starting Willie Green or Quincy Pondexter, we'll soon find out.

No in-depth analysis is required here. There is no comparing one of the best players of all time with arguably the worst starting shooting guard in the NBA (the only others competing for this illustrious title are Jodie Meeks, Keith Bogans, the corpse of Raja Bell and the rapidly improving Paul George).

Another huge advantage, but this time for the Lakers. 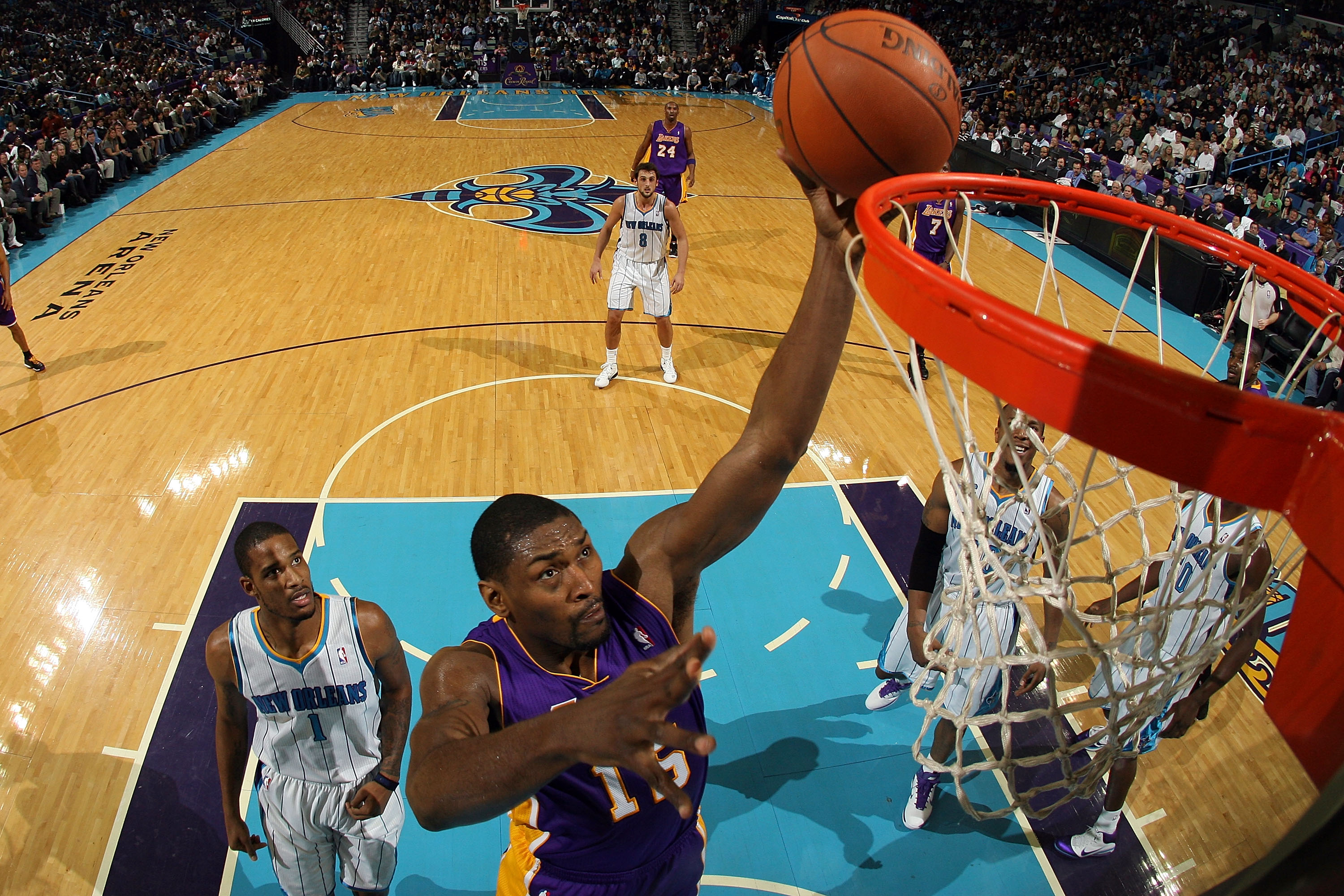 Two seasons after Artest replaced Ariza on the Lakers they will face each other in the playoffs. These two have been compared incessantly since swapping teams and their eerily similar stats aren't helping matters.

Both are excellent defenders (although Artest specializes in man-to-man and Ariza in help defense). Neither can shoot efficiently but both think they can and have had clutch moments. Both of them are capable passers and average ball handlers for their position.

Ariza is a slightly better rebounder but Ron-Ron is tougher and stronger. Artest has more variety to his offensive game but Ariza is quicker and jumps higher. Both are capable of frustrating mental lapses and of lighting a fire under their team.

This one is a draw. If Artest had someone in this series to hone in on, shut down and keep himself motivated I would have given a slight advantage to the Lakers. A disinterested Artest equals a 'will make at least three plays a game that make you want to beat your head against a wall' Ariza. 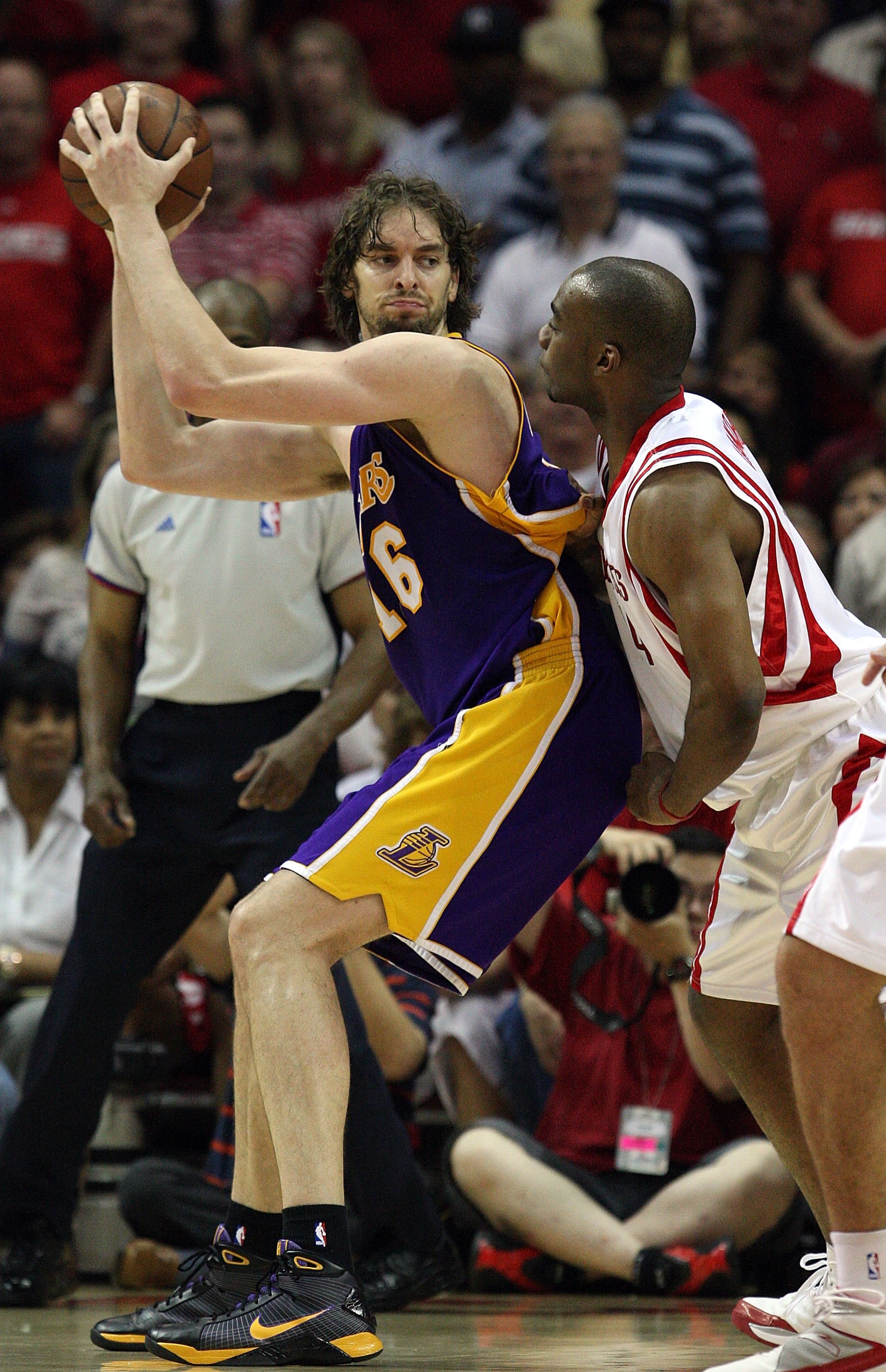 This is where things really start to get rocky for the Hornets. The impact of the loss of David West to a torn ACL can't be understated. Even with a healthy West, the Lakers were going to win this match-up because of the brilliance of Pau Gasol.

Landry, at 6'9", is an under-sized power forward. He doesn't exactly explode off the ground or have proportionately long arms (his wingspan is 6'11") to make up for this fact either. He is a skilled offensive player and a decent rebounder. Barring foul trouble, he will have to play more minutes than his season average (his per 36 minute numbers this season include 16.3PPG and 6.3RPG).

Gasol has evolved into a perennial all-star and member of the all-NBA teams. His toughness is sometimes questioned but he can do almost anything offensively out to about 18 feet from the basket that you can possibly ask a big man to do. He will enjoy a massive height and reach advantage in this series. If he takes advantage things will quickly turn sour for the Hornets.

A pretty substantial advantage for the Lakers (not as large as the Bryant over Belinelli or Paul over Fisher advantages, but close). 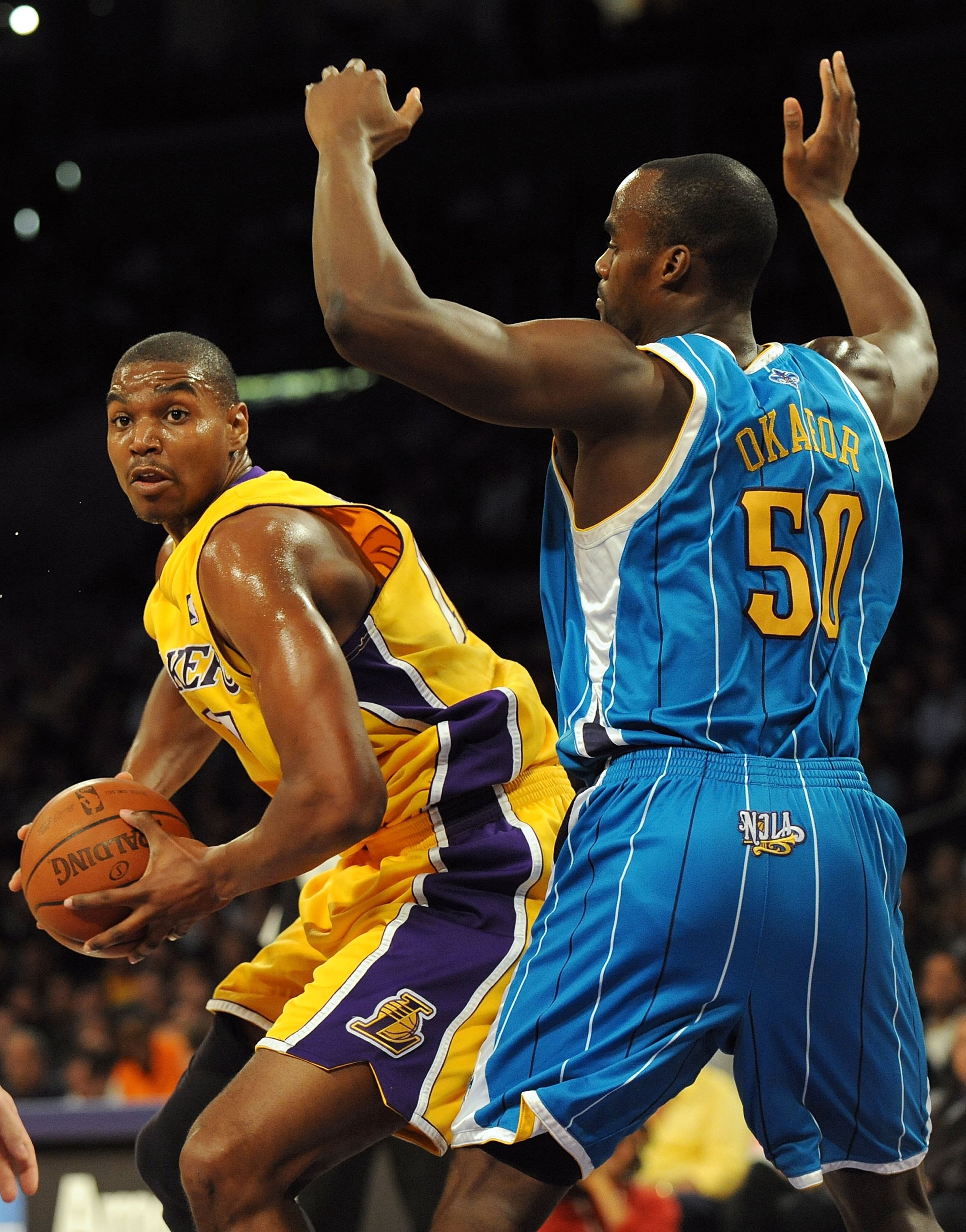 Assuming Bynum is completely healthy (how many Lakers fans do you think were sick to their stomachs watching him lay on the ground against San Antonio? My guess is somewhere around every single one). Their stats are pretty similar, but there is one distinct difference between these two players. Okafor would be given the opportunity to do more offensively if he had proven himself capable throughout his career. Bynum, on the other hand, hasn't yet been given the opportunity to truly explore his offensive potential.

Okafor is an excellent shot blocker and defensive rebounder. His defense (both team and individual) are solid and he is a very good team player. Unfortunately, he has heavy hands and a very mechanical offensive repertoire.

Bynum has been injury prone and is really just starting to scratch the surface of his potential. Every season he seems to showcase different parts of his game that were recently developed (whether it be his positional defense this year or his new post-up moves two seasons ago). This particular match-up will be a difficult one for him because he is going up against an intelligent and strong veteran in Okafor (who has only actually played one more NBA season than Bynum, but is five years older).

If Bynum is completely recovered from his bone bruise, then this is a slight advantage for the Lakers. 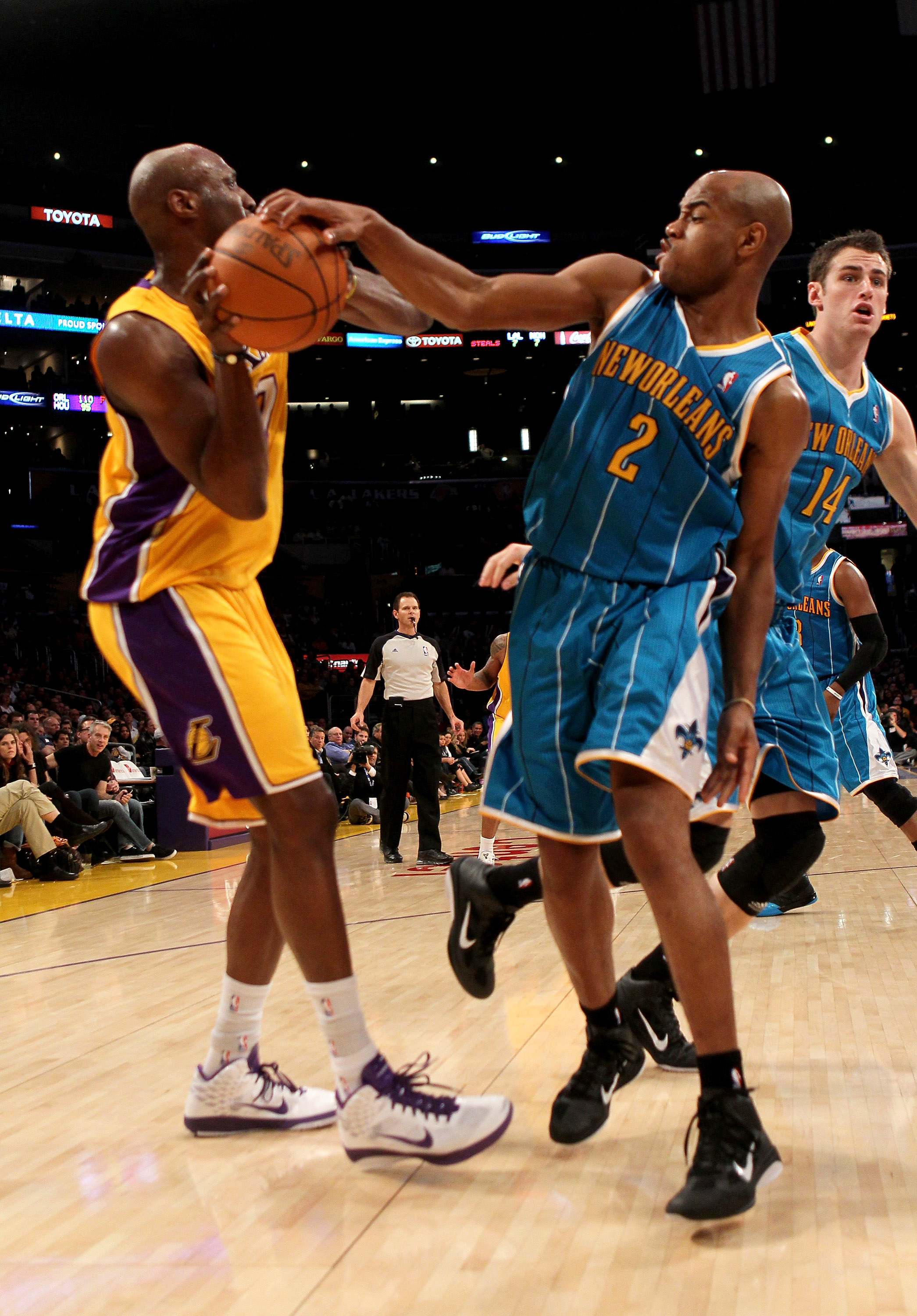 How much do you think the Hornets wish that they had kept Marcus Thornton after he torched the Lakers during the last game of the season (and pretty much everyone else he's played during the past month)? With Landry starting out of necessity, there just isn't a lot of firepower on their bench. Gray and Pondexter have potential and Jack is a good floor general, but there isn't too much to get excited about here.

In Odom, the Lakers have the likely sixth man of the year winner leading their bench. If Barnes' knee and Blake's chickenpox (how long does it take for an adult to normally recover from that you ask? Two weeks) don't hold them out for significant time, then the Lakers advantage on the bench will change from decent to massive. 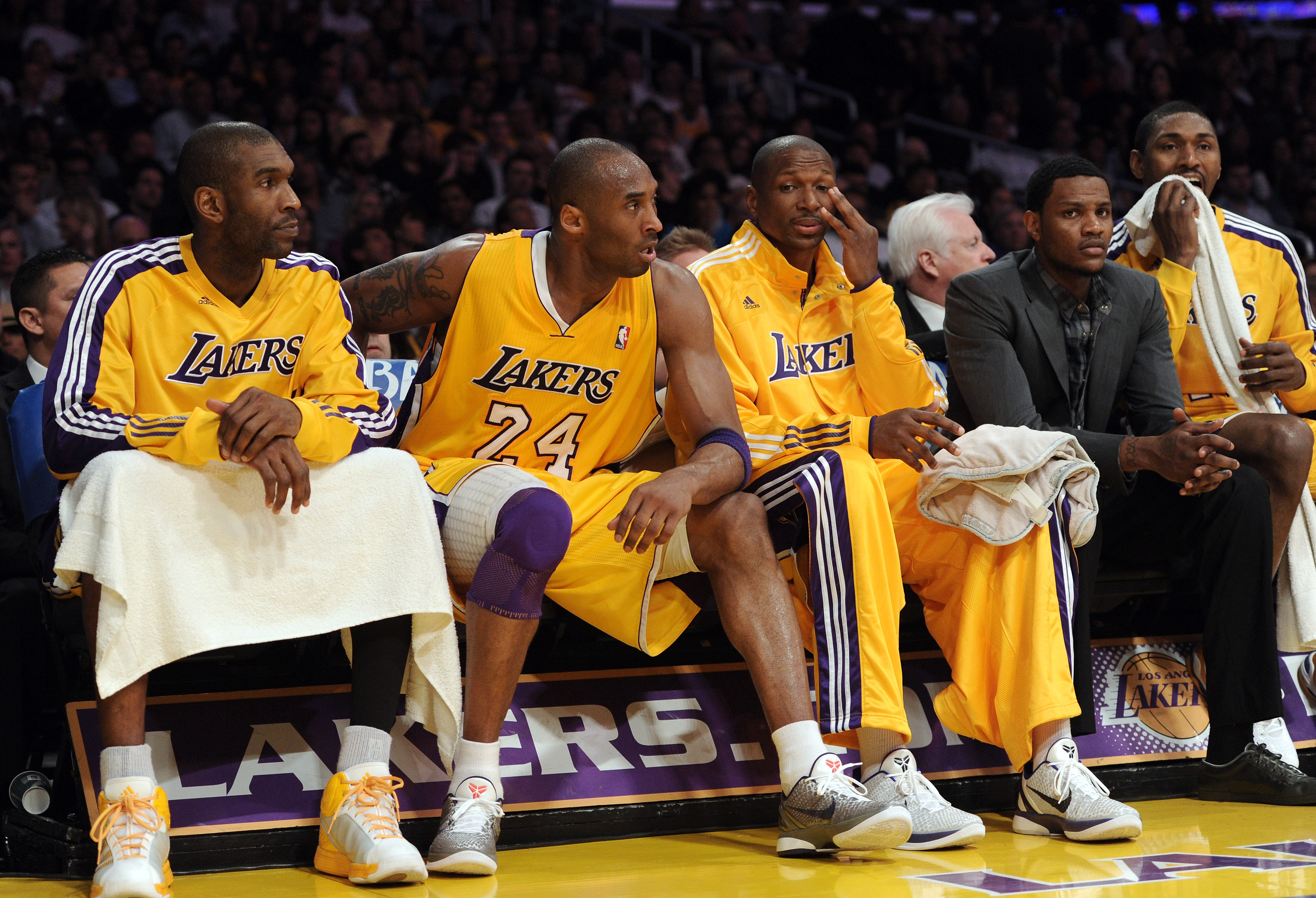 The Lakers talent and depth should be too much for the Hornets to overcome. Then there is the advantage of having Phil Jackson over Monty Williams.