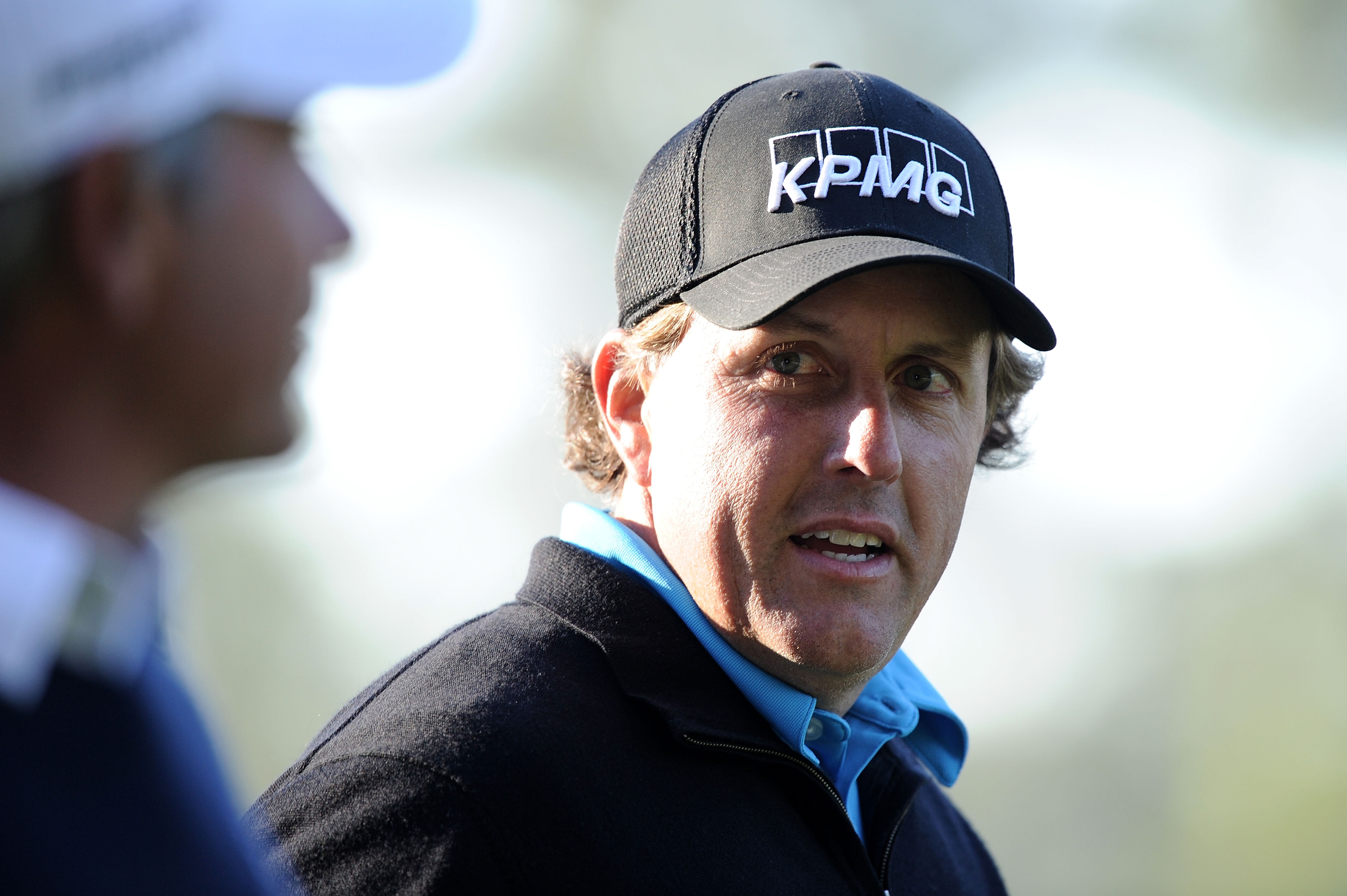 Will Clemson whip the Cardinals? Can the Yellow Jackets beat the Cowboys...at the Masters?

Here we go, boys and girls, a chance to place friendly wagers on golfers from your favorite schools as they square off in Augusta.

Anxious to get started?

Round up a gang of golfing Nassau buddies, start a this-weekend-only league, pick a number out of the hat for draft order, then choose a college with golfers in the Masters. Lowest individual score wins. If there is a tie for lowest player score you go to the second player for a combined score.

We don't wish to push you toward one team or another so we will list all college golf teams in alphabetical order. Some schools will have only one player, others will have several.

Don't be swayed by the quantity on a team as the winner will be an individual. However, a team with more participants may increase your chances if one of them breaks through.

Check the slideshow for an alphabetical college listing. 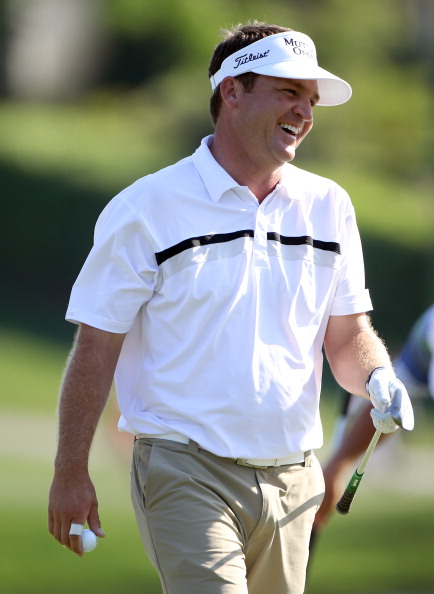 Here's a group of colleges with one representative each in the Masters. There are a few foreign players in the group.

Jason Bohn represents the  Alabama Tide. If you choose Jason you can yell "Roll Tide" as his putt is approaching the hole. Jason is pictured above.

Alabama-Birmingham has Graeme McDowell in the event. Can you imagine a Scottish accent at a Birmingham school? Graeme may have selected the school based on being named a British city.

BYU is here. They also play golf in Provo. Mike Weir is their man.

Weir is not the only golfer from the mountains. Martin Laird is from Colorado State.

Drake University has Zach Johnson in the event.

I'm shocked the Gators have only one golfer in the Masters. Camillo Villegas represents Florida.

Hartford U. gives us Jerry Kelly. If you're a fan you can be one of his "kids" or one of his "heroes."

The Hoosiers are here. Indiana gives us Jeff Overton.

Here's a shocker. The home state University of Georgia only has one Bulldog at the Masters. Of course he's a Bubba, the one named Watson.

Do the Jayhawk fans have someone to root for? Sure they do. As long as he doesn't send his drives into the woods, Gary Woodland will get Kansas support.

LSU has a Tiger in the race. David Toms be he.

Do you think Northwestern has no golfers here? You are wrong, sir. One of the favorites, Luke Donald, went there.

The OU Sooners has a guy who finished third last year, Anthony Kim. Not a bad pick.

There's a Duck on the course. And we don't mean Gilbert Gottfried squawking about insurance...or getting fired. We mean Ben Crane from the Oregon Ducks. Only fitting, right? A Crane plays for the Ducks.

South Alabama gives us one of the better tour names, Heath Slocum.

The Texas A & M Aggies sends us Ryan Palmer. Any relation to Arnie?

The Trojans are represented. Does he come in Magnum size? Yes, USC gives us Craig Stadler. 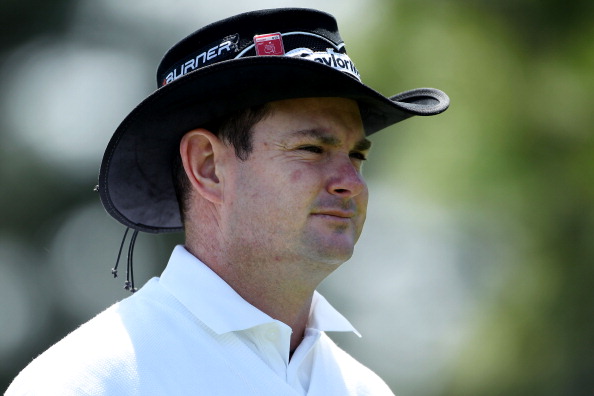 Ricky Barnes—ranked 77th in the world.

Unless you are anti-Cat, this looks to be a strong play. 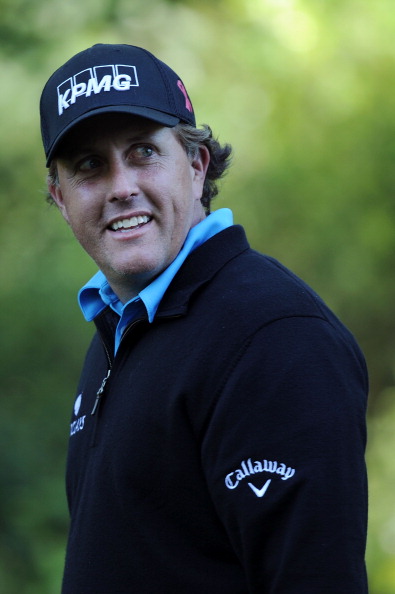 Paul Casey—A 33-year-old Englishman who has been finishing strong on the tour for several years.

Phil Mickelson—Leftie may be the favorite.

Like we said earlier, if Jim Furyk and Phil finish as expected, we could see a Wildcat and a Sun Devil walking down the same fairway. 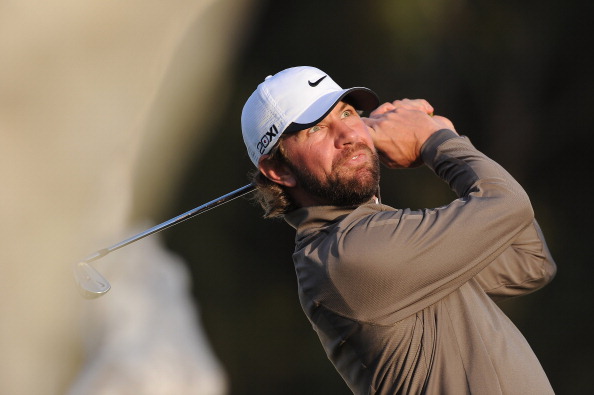 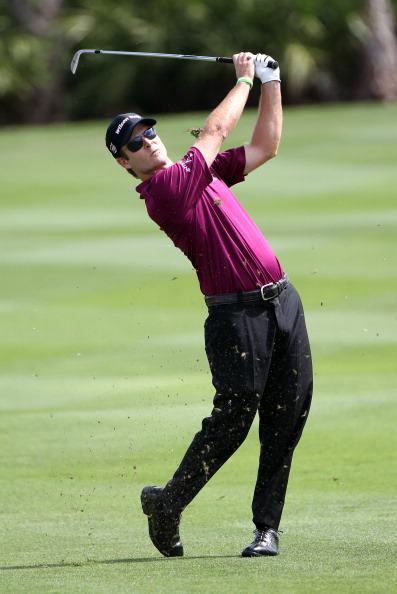 Nathan Smith—How did Smith get an invite? He's ranked 325th in the world. If you're sure he'll place in the top 10, go to Vegas.

Kevin Streelman—135th in the world. Very much a long shot. He is pictured above.

This is an enticing team. After all, Bobby Jones, a Masters founder, went to Georgia Tech.

Plus, you have home state with guys who are tearing up the tour. Stewart Cink  was 16th in the world in both 2008 and 2009. Standing 6'4", Cink's long, high drives are made for Augusta—and for the British Open, of which Cink is reigning champion.

Matt Kucher was ranked 13th in the world in 2010 and is currently ranked 10th. Matt also stands 6'4" (it might be a requirement to play at Georgia Tech) and booms his drives for a 290 average.

Larry Mize won the Masters in 1987. The 52-year-old golfer belongs. After all, he was born in Augusta.

You can't go too bad picking a team of players who went to Georgia Tech.

Only problem—if you win the Masters you don't get a yellow jacket.

Matt is pictured above.

Illini at Augusta: Points and Stricker 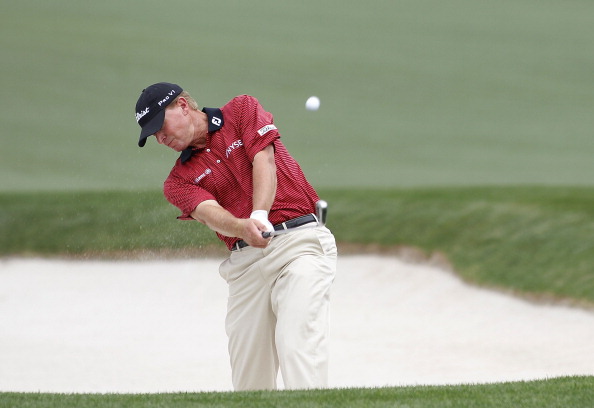 Steve Stricker—You know the thing about Steve Stricker? He's an excellent ball striker. He is a favorite and consistent as apple pie. Stricker was top ten in the world four of the last five years. Won $6.3 million in 2009. Had a top ten finish in 11 of the 22 tournaments he entered in 2010. He has a 2011 average round at 69.05.

You've got a strong chance if you select Illinois.

Tarheels on the Greens: Davis Love and Mark Wilson 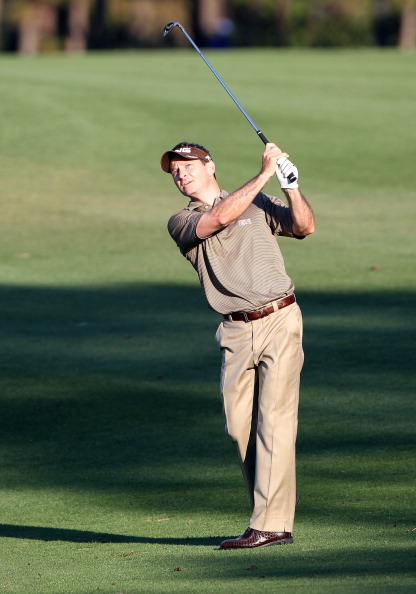 Keep the hecklers away, Davis Love III is in the meet. Love booms his drive for a 295 average. Currently 130th in the world.

Mark Wilson is hot, hot, hot. He is first place in Fedex Cup standings with two wins in nine starts. Averaging 70.13 per round.

The only problem with these North Carolina guys are their heels. The Green Coats prefer tar not to be left on the greens.

A Pack of Wolves in Augusta: Clark and Pettersson 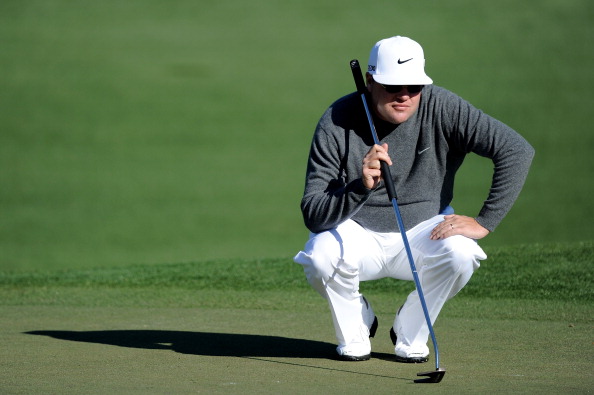 Do two golfers make a Wolfpack? If they're from North Carolina State, we'd think so.

Tim Wilson, a short hitter from South Africa (275 yard average), hits 88 percent of his greens in regulation. Remind you of another South African golfer? For the last two years, Wilson was ranked 23rd in the world.

Carl Pettersson has an extra "s" in his name. Watch him bend his drives and curve his putts. He also has the extra "s" because he's from Gothenberg, Sweden where they had "s's" to spare. He's ranked 103rd in the world and an excellent putter, pictured above.

The Cowboys with Four at the Masters 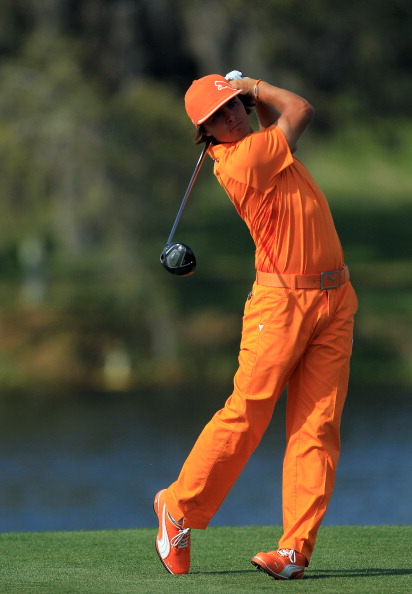 If you're playing along and you want to bet on sheer numbers, the OSU Cowboys usually provide quantity at the Masters. However, this year neither Scott Verplank nor Charles Howell III made it in. Instead, the Cowboys are sending young Ricky Fowler, the crafty Hunter Mahan, an amateur, Peter Uihlein, and Bo Van Pelt.

Here's their world ranking and round averages:

Uihlein:  Won U.S. Amateur and is top ranked amateur in the world.

Stanford Cardinals Can Golf, Too: Watson and Woods 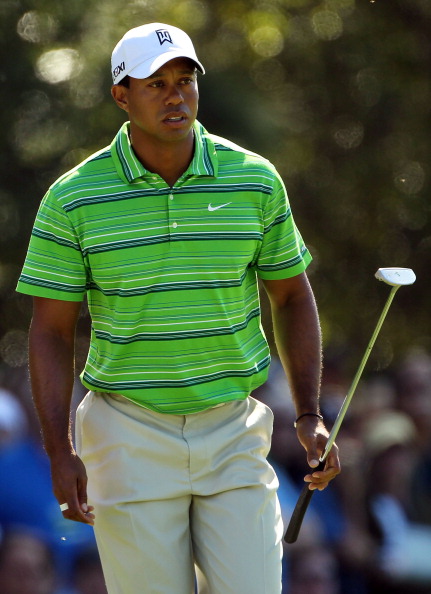 Two Hall-of-Fame golfers from the Cardinals, Tom Watson and Tiger Woods make Stanford an interesting pick.There are six Masters wins between the two.

The truth is, Woods hasn't played well in a while. Vegas has him at 25 to 1. By comparison, Mickelson is running 8 to 1. 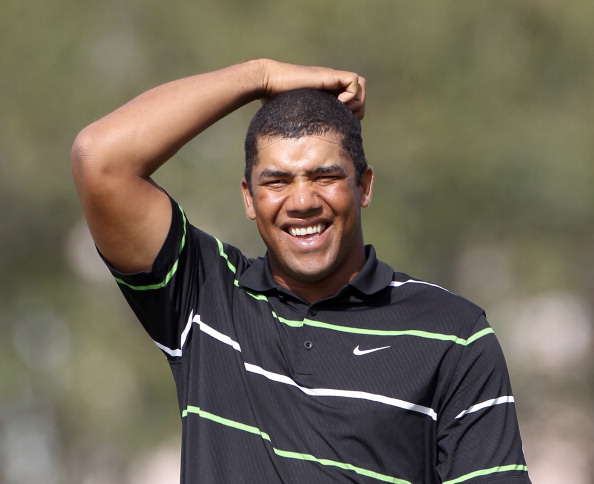 Keep in mind, Justin Leonard is not in the field this year. But Ben Crenshaw and Jhonattan Vegas are representing UT.

Vegas won the 2011 Bob Hope Classic and hopes to have a great year. He's ranked 83rd.

Crenshaw is at age 52, with 19 Tour victories and two Masters wins.

With Vegas Playing for Texas, the Runnin' Rebs Try Their Best 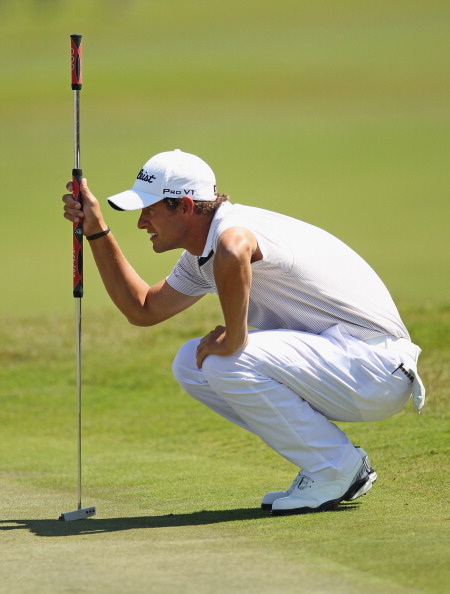 UNLV has a bunch of great golf courses for practice purposes. You have to wonder why more college stars don't come from the Rebs.

Adam Scott (pictured) and Ryan Moore are at the Masters.

The Australian, Adam Scott, was seventh in the world in 2007 and was 23rd in 2010. Both are final day guys, so they might surprise.

There you have it. I've given you all the teams with two or more players plus all the singles (second slide). Pick wisely and root for your favorite former college golfer. Lowest score wins.