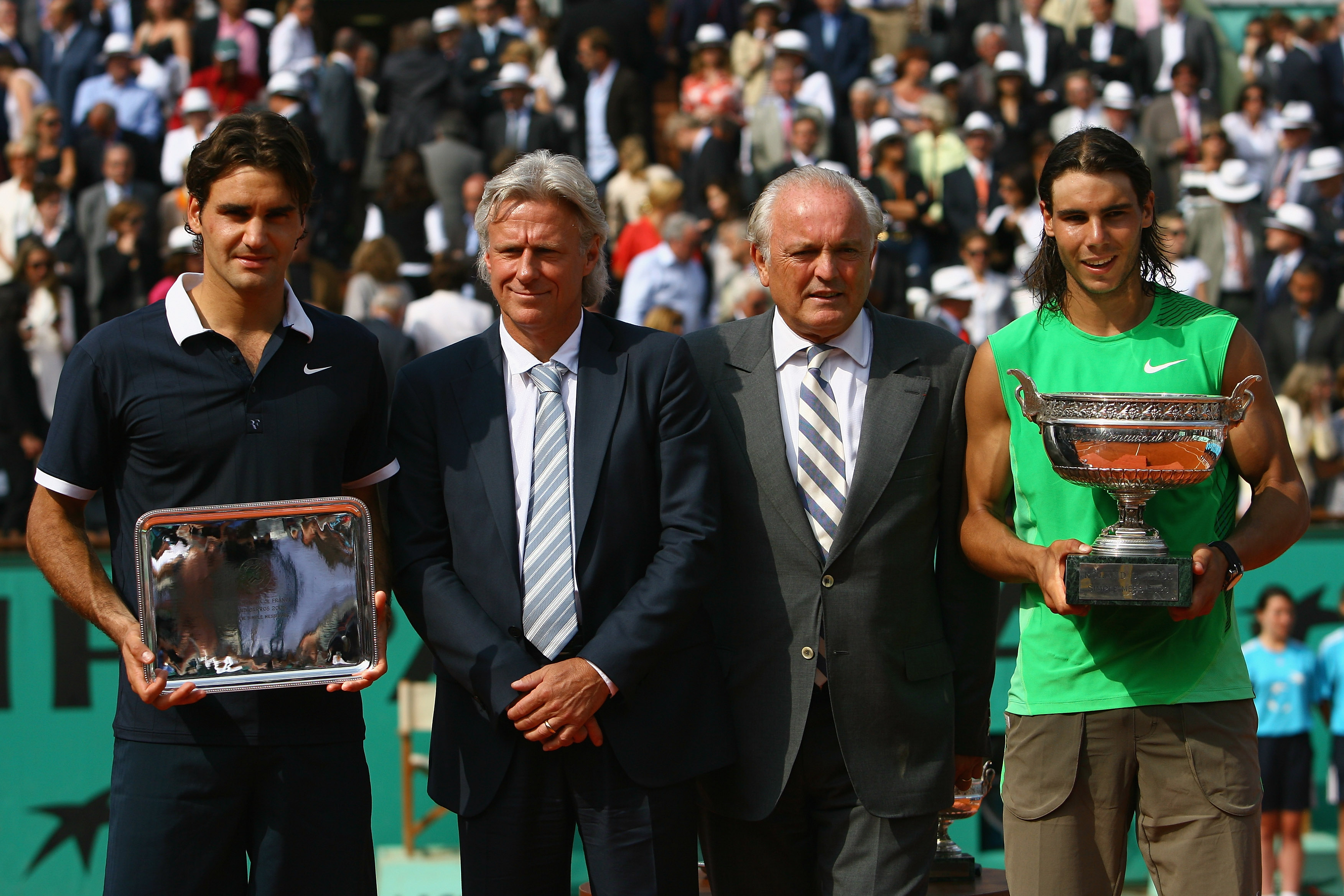 Tennis was first played on grass starting in 1860 on the courts of Wimbledon.

Many at that time already thought the costs to maintain them were very expensive, while some had the idea to lower the charges and create another surface.

The Renshaw brothers, who claimed many Wimbledon titles, came to the rescue and discovered the clay.

In 1878, they decided to move to the southern coast of France, where the weather is much more appropriate to tennis and make a living by building tennis courts.

They were living in a small town between Cannes and Nice and found the idea to crush a great amount of flower pots, which are made in clay and turn them to a powder that would be used to slide on.

In addition to flower pot, they later discovered they would have the same results by crushing red bricks and turn them to a smoother powder.

Clay court tennis was born and the success was so huge that most European countries adopted the idea right away.

It's a surface which stick to your socks and shirt even if the  weather is good. The turf also adapts to the climate, turns to mud if it's raining, which is a nightmare for the great servers. The champions play on the slowest conditions possible. It's the opposite of fast court tennis.

In some regards clay is a different form of tennis as it requires different footwork—a “sliding-into-the-ball” approach. The terre battue slows the velocity of the ball enough to give players on the defensive just a little more time to save a passed shot that on a faster surface would otherwise be a winner.

As the clay court season is looming, we thought it would be time to rank the 10 best clay court players in the Open era.

The ranking will be based on the French Open results and not on the number of clay court tournaments won since I believe Roland Garros is the most difficult tournament to win—It's a best-of-five set format and there is no tie-break in the deciding set, which only allow the best of the best to win it. 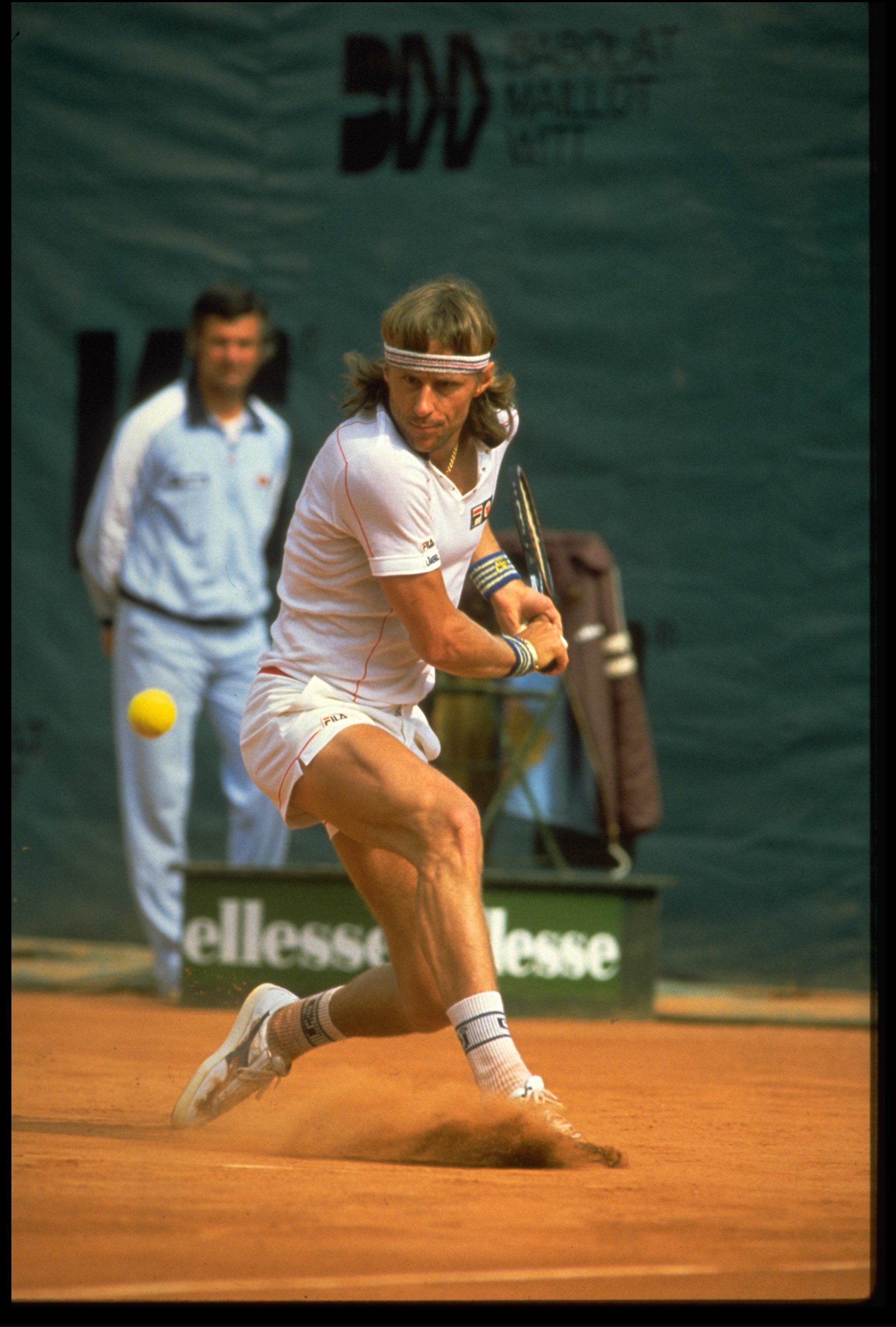 Bjorn Borg is a player who had power, patience and strategy, which were key to his clay court success.

The Swede was winning with an indefatigable, ball-lashing baseline style the likes of which no one had seen before.

Each time Borg hit a shot, he did it with so much power that his opponents would only last a few games before being exhausted physically.

The former World No. 1 was playing a lot like the way Nadal is playing today. The difference between Borg and Nadal is the material.

The Stockholm native played with wood rackets and had a better double-handed backhand, while the Spaniard's makes more damage with his forehand.

Borg won 49 matches at Roland Garros and only lost two, while Nadal won 38 and lost one.

More over, he is still to this day the only one to have claimed six French Opens, which is why I have to put him above Nadal so far.

However, the Mallorcan can certainly pass the Swede in the upcoming years.

If the current World No. 1 were to equal Borg's record this year, than I will be happy to reverse the standing on June 4th. 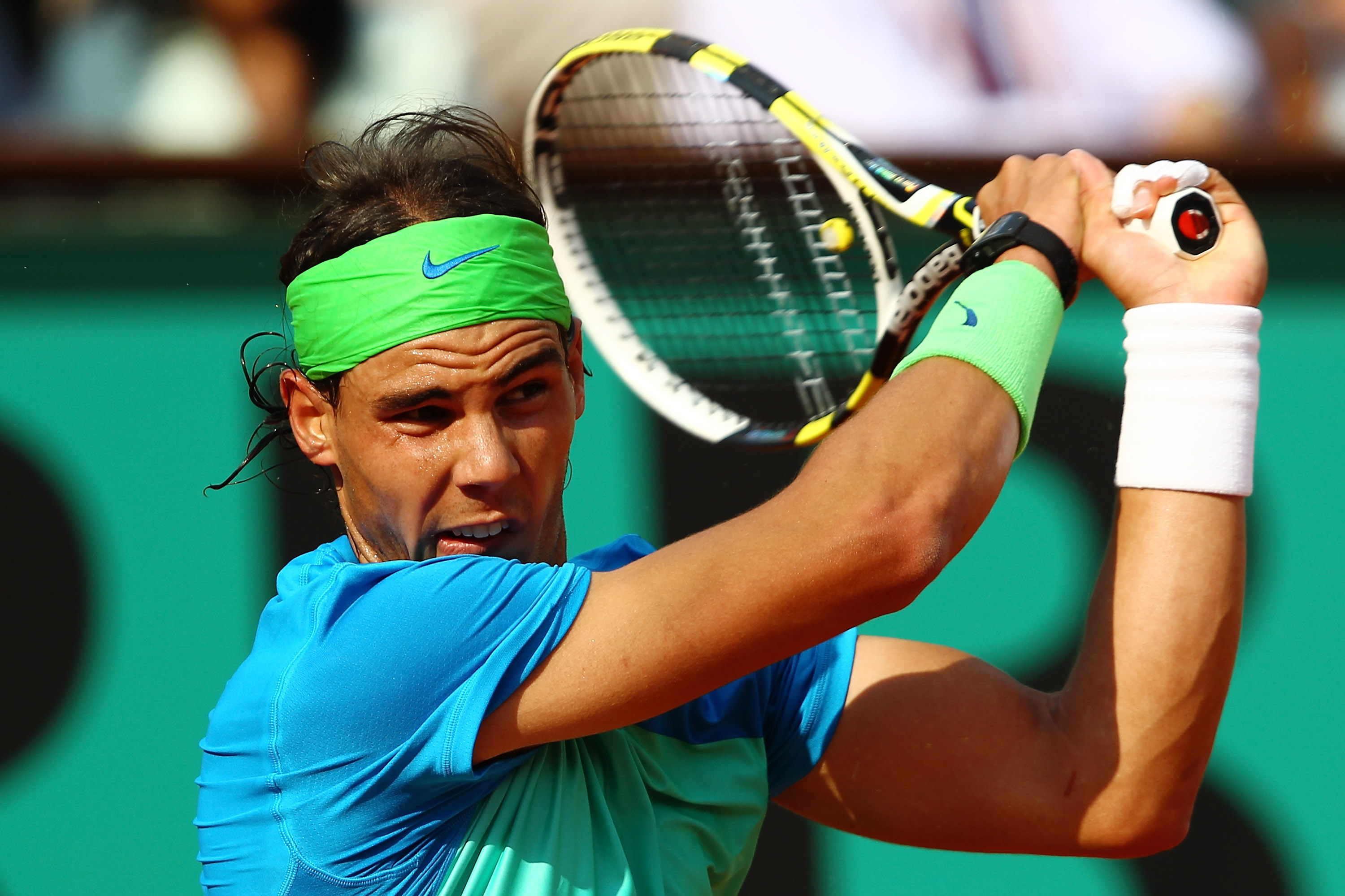 It is always worth watching a great champion in action. But Nadal is not going to be drawn into deciding whether he is the greatest clay-court player of all time.

“I am not so arrogant,” he said with his disarming smile after winning his fifth Roland Garros trophy. “Maybe that is for you to do decide when I end my career.”

However, if the current World No. 1 wins a sixth French Open title in early June, to draw alongside Bjorn Borg, who won six titles over eight years, Nadal, who now has five in six years, will be laying a solid claim to that unprovable acclamation of The Best of All Time.

The Baleares island resident know better than anyone else when to slide, when to hit and how to exhaust his opponents.

Nadal, despite the annual round of talk about his body breaking down—we may still be talking about it when he's winning titles at 28—is likely to loom as a towering figure on clay for longer than any of his predecessors.

Clay highlights the particular beauty of the 24-year-old's game. It's a beauty of energy, of the vitality, rather than the elegance, that can be exhibited in tennis, and which is embedded deeper in the sport's core.

It can be found in the way he plays his forehand—few players have ever hit with his combination of high-arcing trajectory and heavy-topspin propulsion.

In his accuracy with each stroke. In his point construction, or even in his ability to slide unimpeded over long stretches, without losing his balance, and catch up with a ball that had seemingly already passed him. 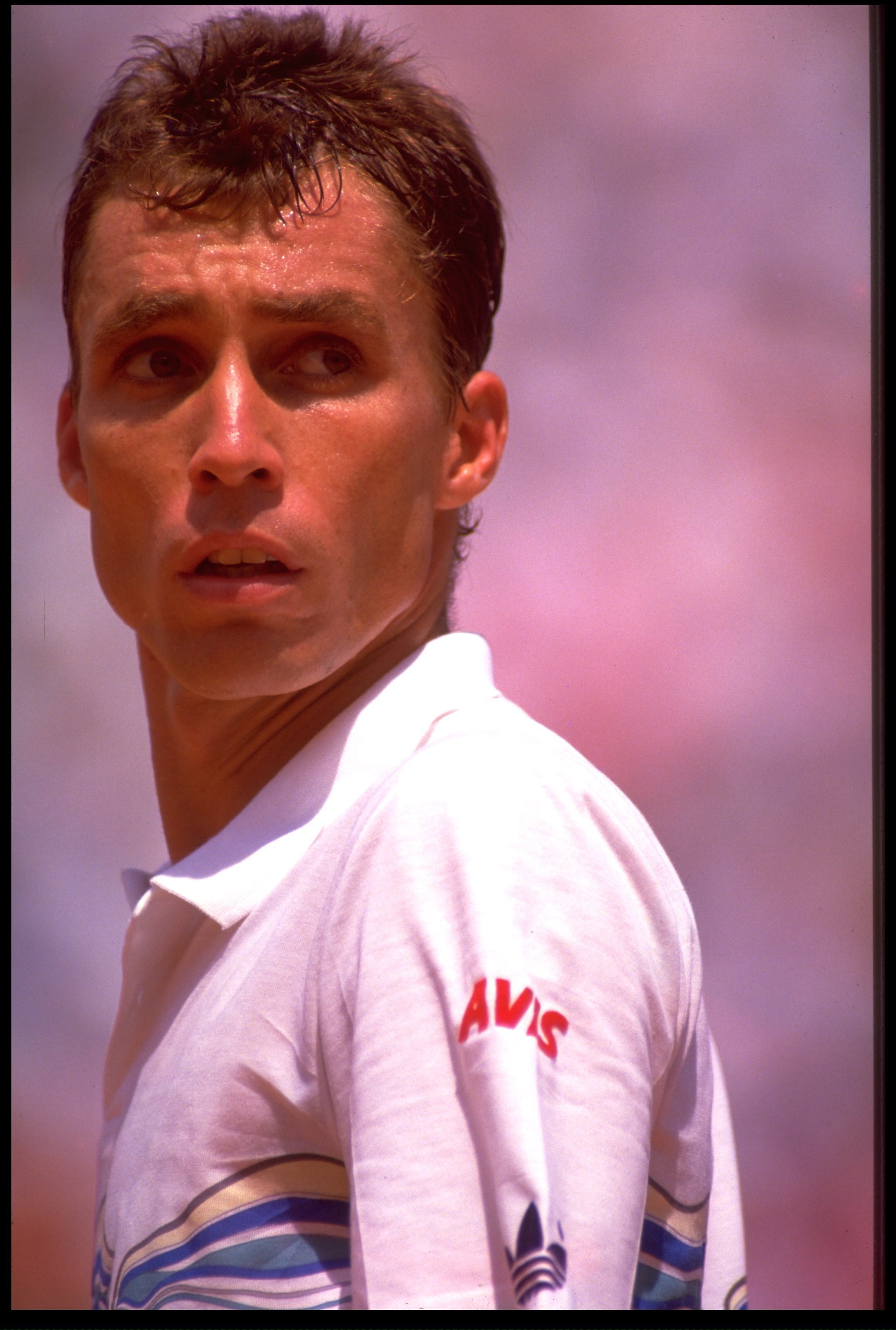 Who does not remember one of  the most memorable match of the 80's at the French when Ivan Lendl claimed his first major by defeating John McEnroe in 1984?

The New Yorker, who was undefeated in the whole season, led by two sets and a break in the third set before the Ostrava native began to turn tables around and win the match.

To this day, McEnroe is still thinking about what happened in this amazing encounter, which officially boosted Lendl to the prime of his tennis in the following years.

Ivan Lendl was the first champion to use and master the inside-out forehand from the ad-side of the court,  crushing weak replies for winners.

His forehand game was setup by his serve, during his domination, no one had a bigger, more consistent and accurate serve than Ivan Lendl. He used his powerful serve to dictate right from the beginning, and his forehand to close the point out.

The American born in the Czech Republic was the first champion to take advantage of his fitness. He lifted weights, did aerobics and cross-training. At his prime, no other tennis player was in better shape, which is why he won also three French Opens, including two in succession. 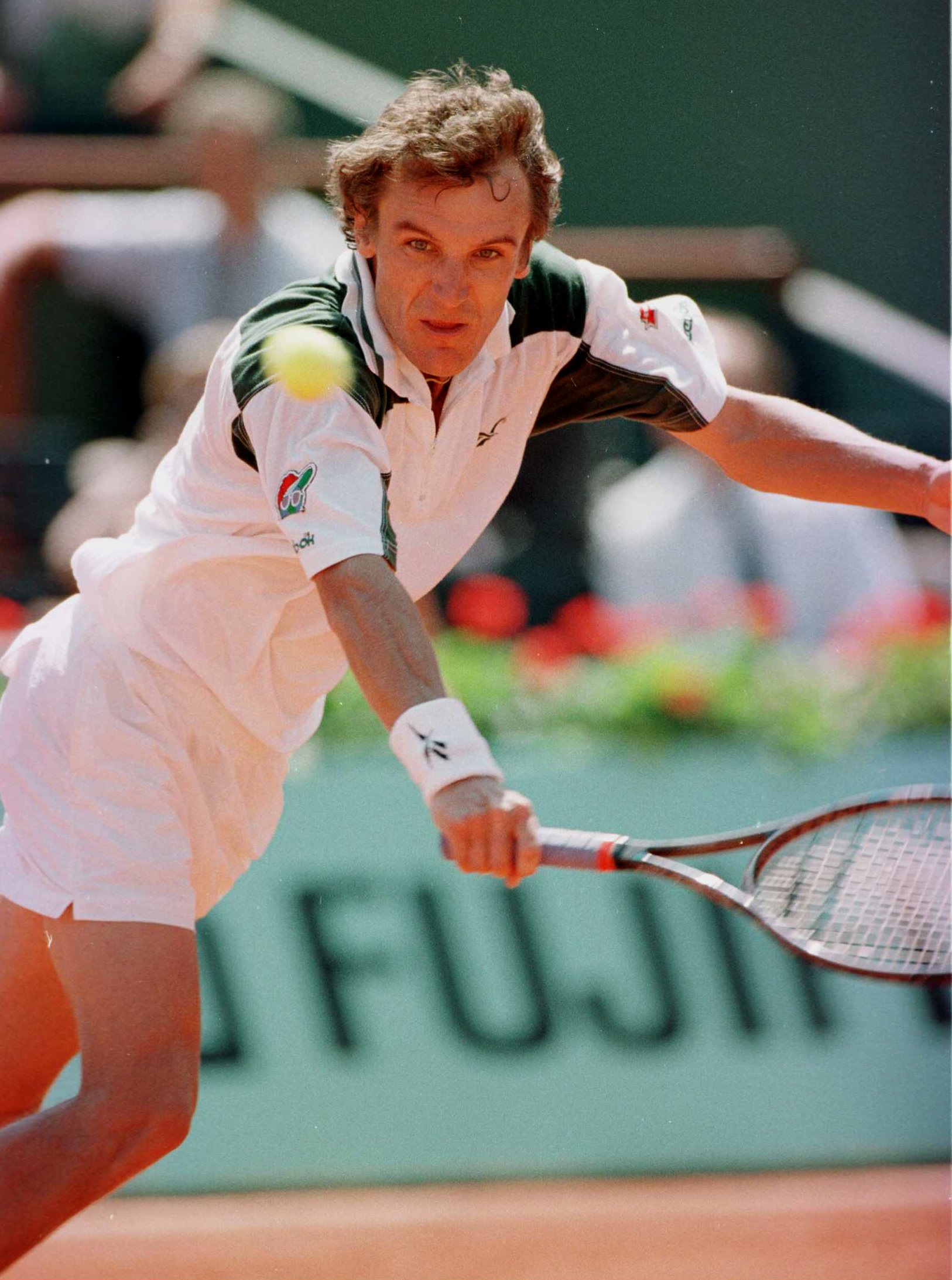 Mats Wilander beat Vilas in the 1982 final in Paris on his patience, his youth, his willingness to work, and his safe ground strokes. After that he gradually improved his game. The man who succeeded to Borg in Sweden played with a double-fisted backhand but also a one-handed sliced backhan﻿d, which helped him be at the top on clay.

Wilander was not playing for fun like a Connors, or Nastase would do. He was always serious on the court, waiting for his opponent to make the first mistake, then would take control of the the match until victory.
Wilander and Lendl would swap most of the French titles in the 80's, with the Swede winning the 1985 edition.

On his last Roland Garros triumph, the Swede, who was at the prime of his career, could not ask for an easier match as he played local hero Henri Leconte. The Frenchman was playing his first and only major final. 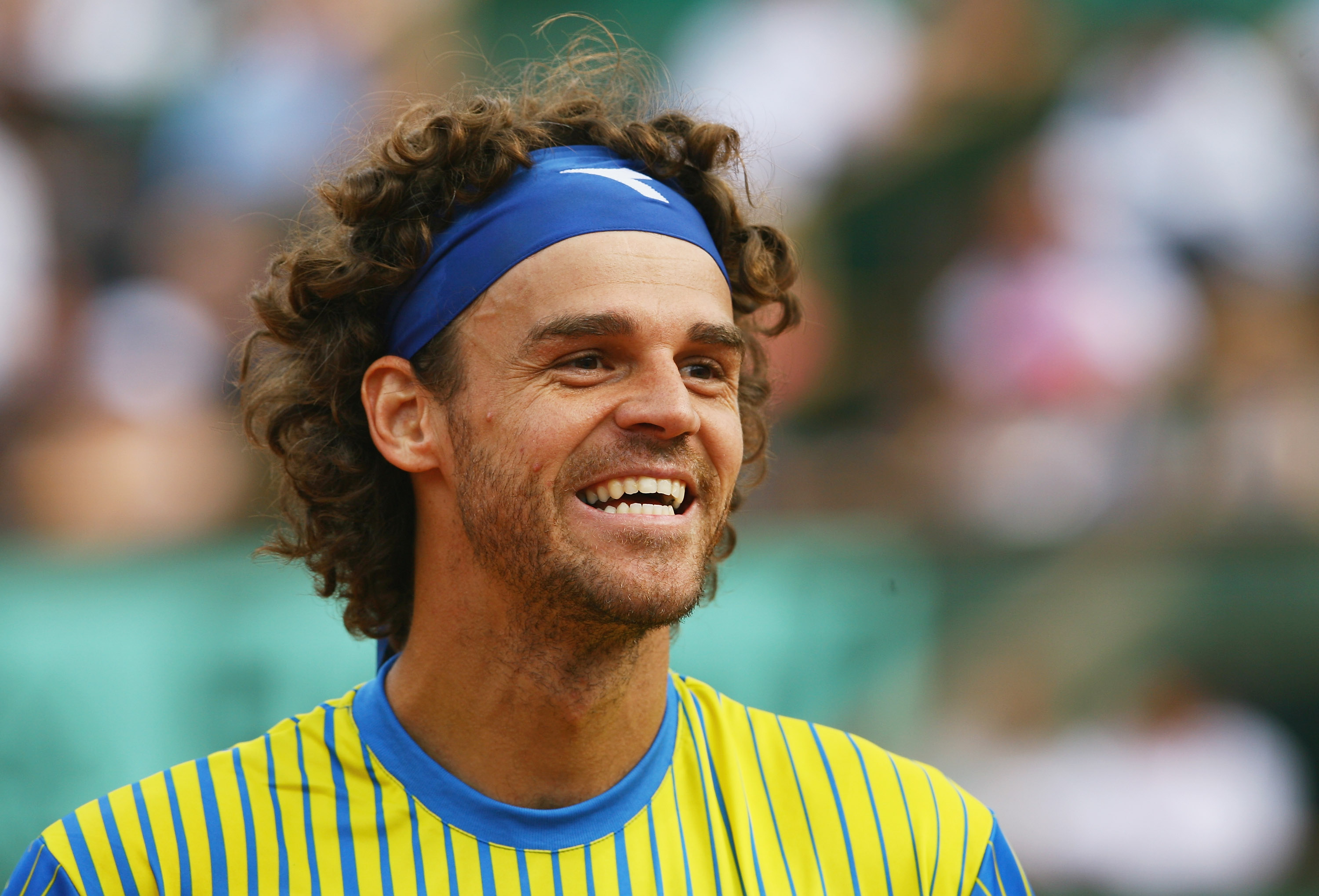 Gustavo Kuerten emerged from just about nowhere in 1997 to win his first tour titles of any sort at Roland Garros.

On this occasion, the former World No. 1 became the second-lowest ranked Grand Slam Champion.

The Florianopolis resident reached the top of the standings in 2000 using his unique serve and strong ground strokes.

Like all the clay courters, Guga embraces the baseline style of play, with heavily topspin hits and a solid serve that enables him to wear down his opponents from the back of the court.

His unique "grunt" when he strikes the ball was recognised by millions of fans around the world.

Even more, Gustavo saved a match point to American Michael Russell in the fourth round and drew a heart in the center of the court to thank all his fans for pushing him during the match. 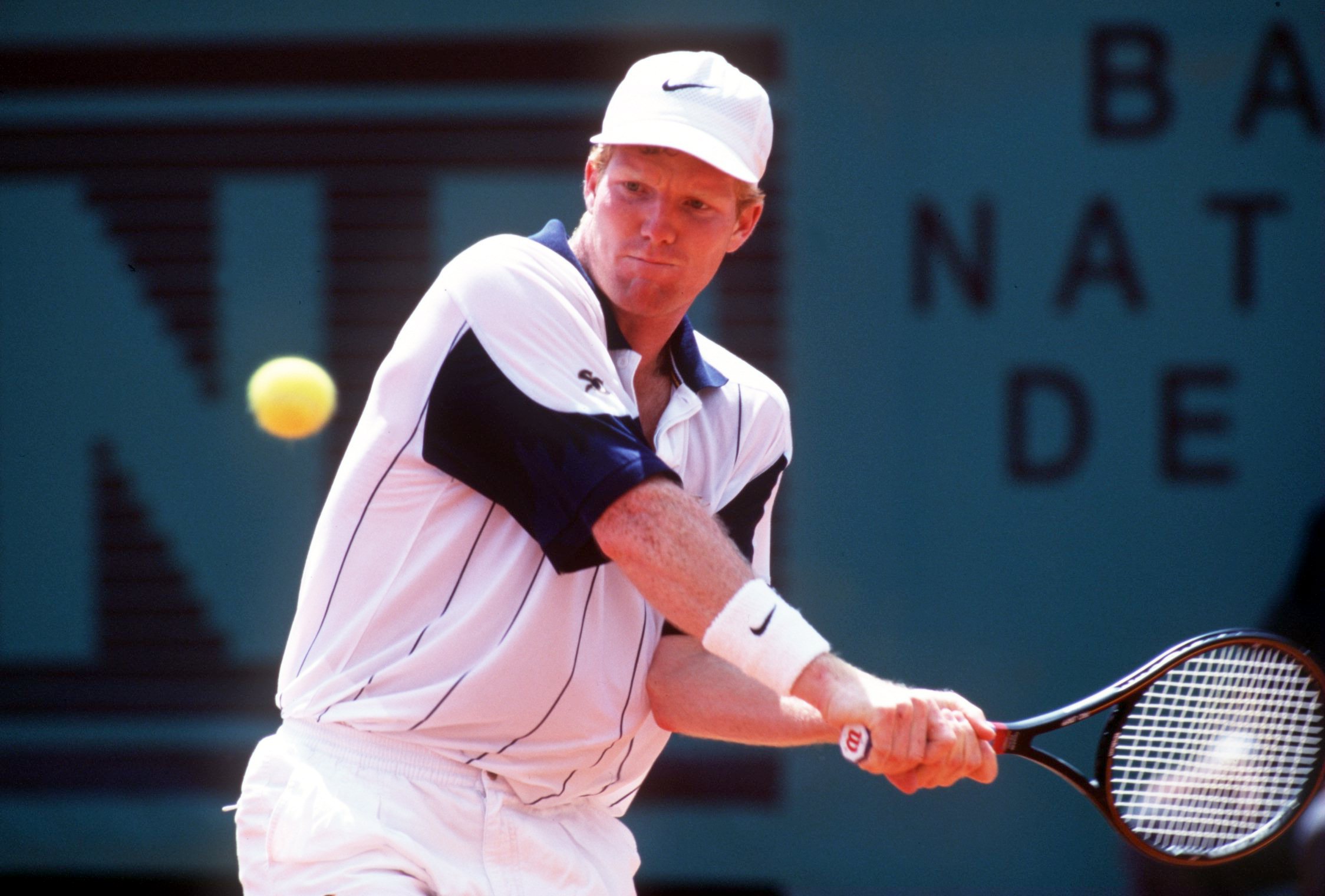 Jim Courier made a name for himself when he defeated Andre Agassi in the final of the 1991 French Open.

The former World No. 1's grit and single-mindedness were the twin motors of a very successful career on clay.

The industrious American was an unflagging competitor who played in three Roland Garros finals, winning two of them.

The big hitting baseliner with the crackling, inside-out forehand and baseball-like two-handed backhand finished 1992 as the No. 1 ranked player in the world.

To this day, the New Yorker is the best player the USA ever had on the dirt.

Some will suggest Agassi was as good as Courier but the facts remain.

The Las Vegas resident only has one Roland Garros, while Courier has two. Moreover, Agassi's head-to-head record with Courier is 1-3 at the French Open.

Then 1993 arrived, which represented the peak of Courier's career, as he was never able to regain his clay-court dominance after losing the French Open final to Bruguera with the most entertaining French Open final of the 90's. 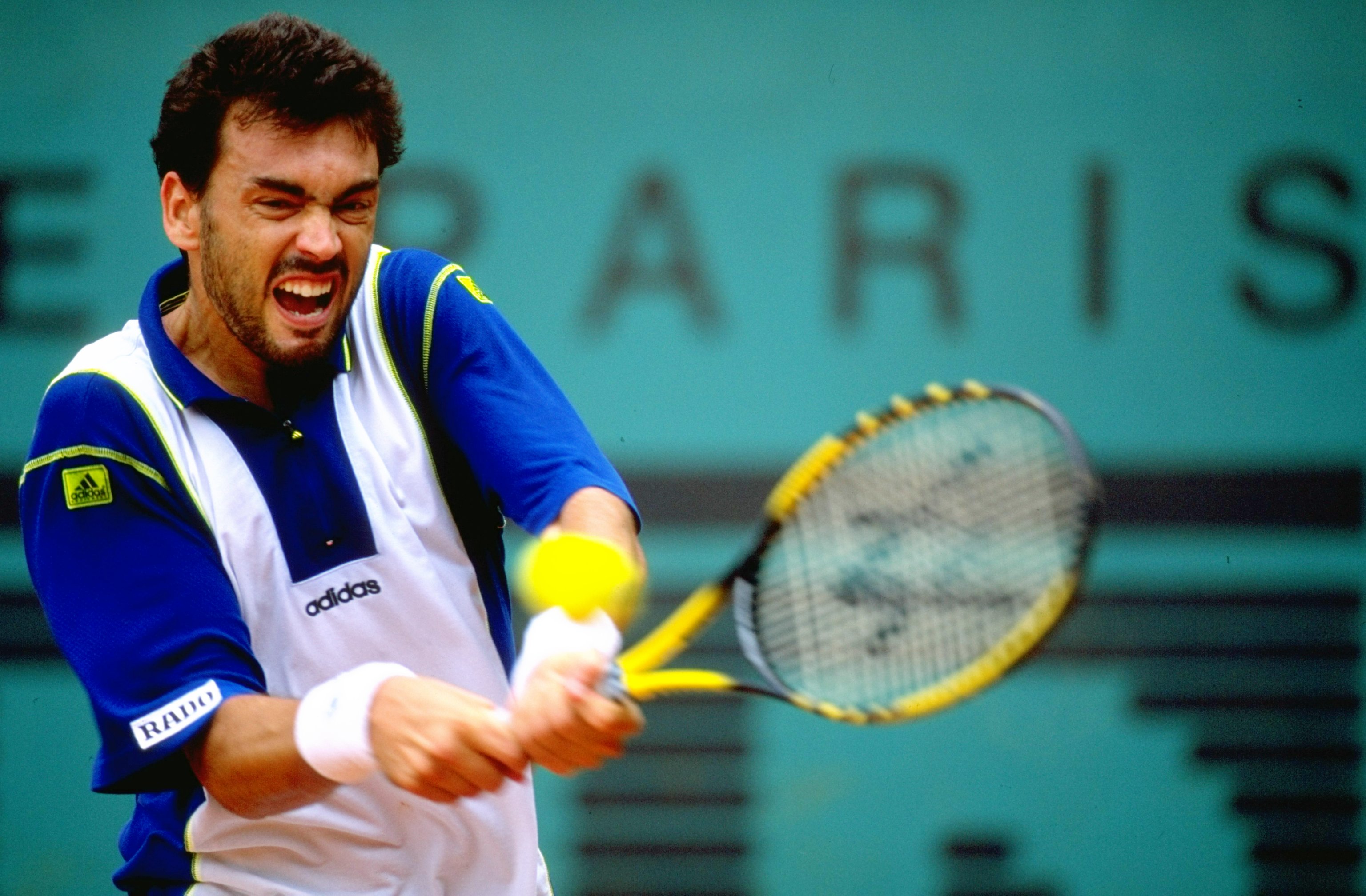 Never forget these words from Jim Courier at the 1993 trophy ceremony of the French when the American claimed: "J'ai été battu par une vache Espagnol". It's impossible to translate it as well in English.

The former World No. 1 has admitted having been beaten by a "Spanish bull".

Courier was upset by Sergi Bruguera after playing the most amazing French Open final of the 90's.

Bruguera also managed to defend his title at the French Open the next year, defeating fellow Spaniard Alberto Berasategui in the final.

The torch was passed in 1997 when the Barcelona native would also make his third Roland Garros championship match against the next clay court giant, Brazil's Gustavo Kuerten. 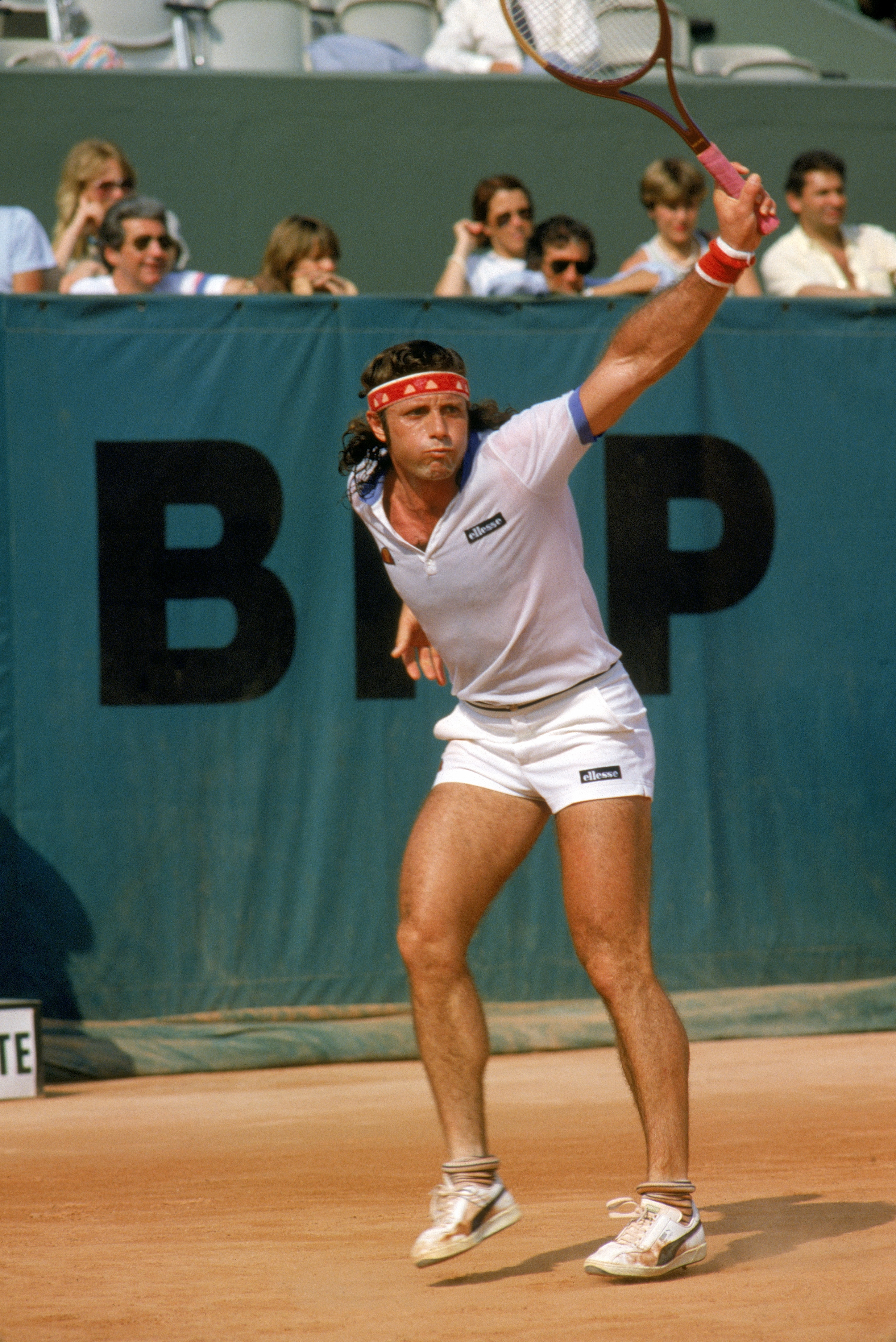 Guillermo Vilas based his clay-court career on stamina, on simply hitting one more ball than the other guy, and when someone other than Bjorn Borg could grind him down, the match was over.

The Argentine was at his prime in 1977 when he claimed two majors on clay. At the time, the US Open was also played on the dirt and not yet on the actual Deco Turf.

The left-hander from Buenos Aires also played in three other French Open finals against one of the all-time greats, Bjorn Borg. 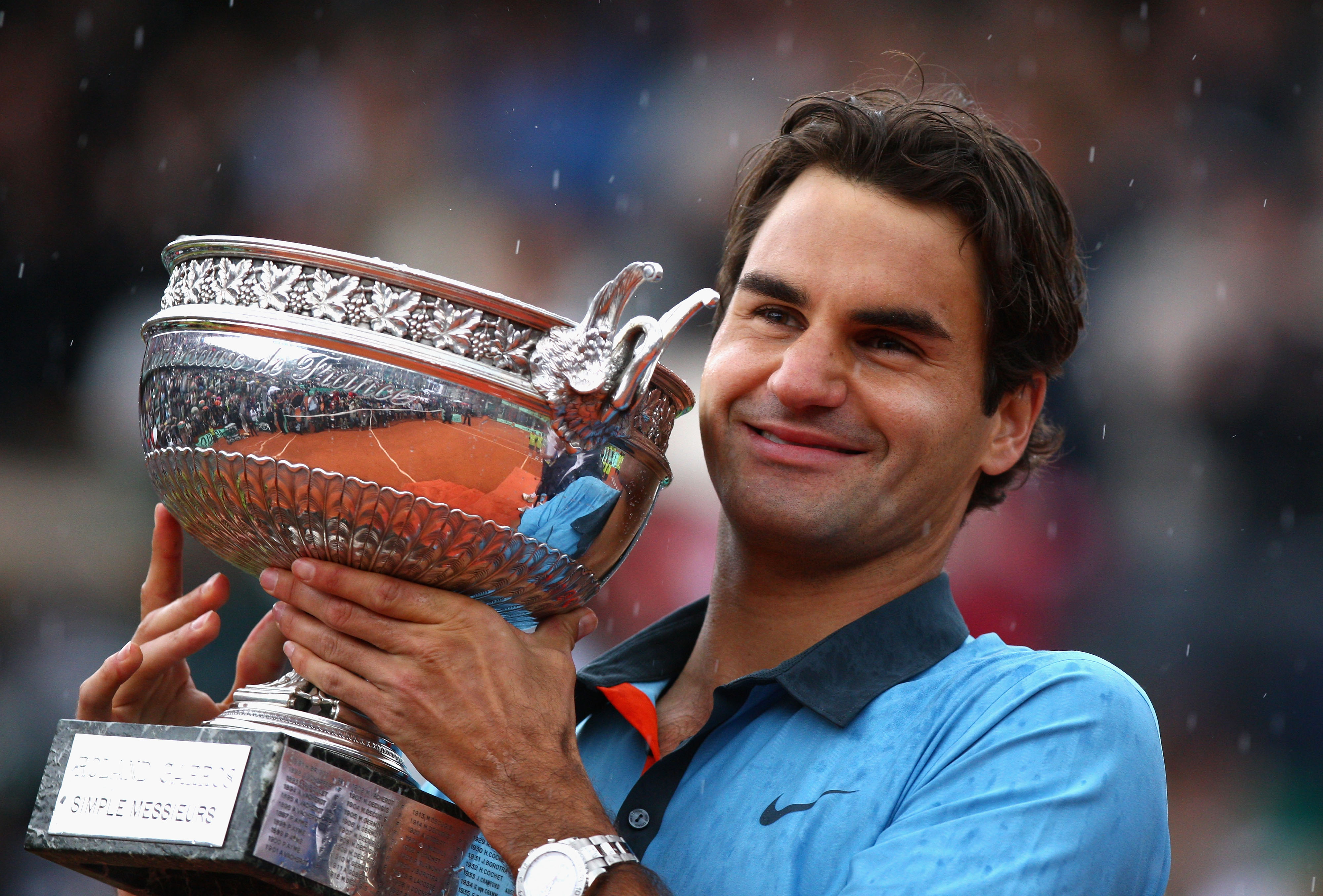 Roger Federer is in the same spot as Guillermo Vilas was. The Swiss played three Roland Garros finals against Rafael Nadal, who is arguably the best clay court player of all time, while the Argentine also reached the French Open championship match three times against Bjorn Borg.

Unllike Pete Sampras, or Stefan Edberg, Roger Federer was raised on clay, which is the reason why he is one of the very few attackers to have win in Paris, which makes his 2009 triumph even more special. 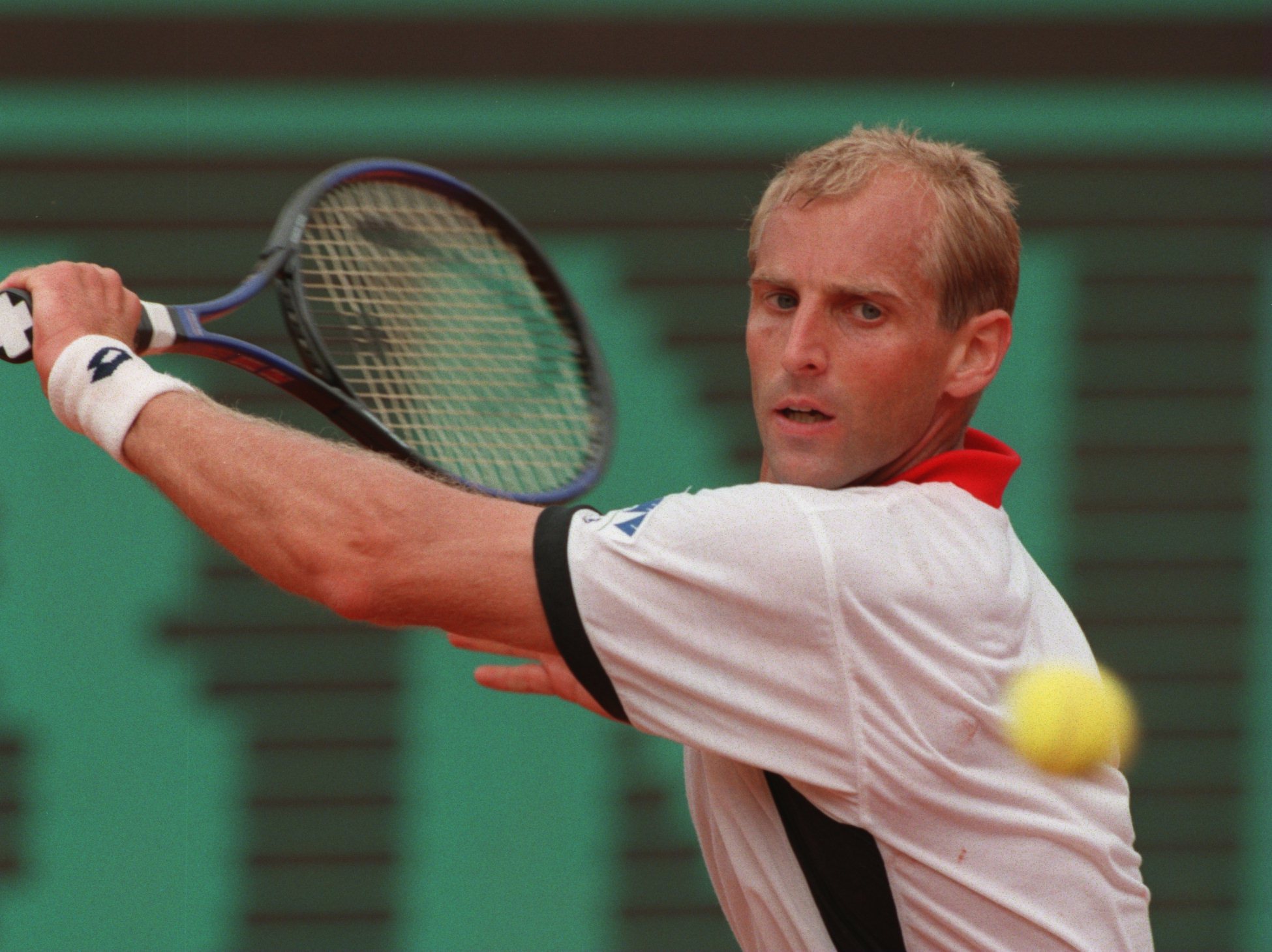 Until the arrival of Rafa Nadal, Thomas Muster had one of the most impressive statistics on clay.

In 1995, the Austrian would grab 12 tournaments. Between February and June, he claimed 40 consecutive clay-court matches (the longest winning streak on the surface since Bjorn Borg had won 46 in 1977-79).

This is the same driven Austrian left-hander who once hit ground strokes in a specially designed chair to stay fit after his left knee was ruined in an accident in a parking lot at the 1989 Key Biscayne tournament.

Muster returned six months later and went on to dominate the clay-court circuit, win Roland Garros in 1995 and briefly reach No. 1 in the rankings during the deeply competitive era of Pete Sampras and Andre Agassi.

He did it while making tennis look and sound like a grind with his choppy stride and menacing baritone groans and grunts, which were the not-so-musical accompaniment to his baseline exertions.