In a suit filed today in Washington County, Razorbacks head football coach Bobby Petrino is suing ex-Razorback and current Ole Miss coach Houston Nutt, claiming Nutt left him with the "worst-coached players in America." When asked about the suit, a University spokesman had this to say:

"Coach Petrino took this job with the understanding that the current group of Razorbacks may be a little thin on talent compared to the rest of the SEC, but had at least been coached well. Upon his arrival and his observations over the first month of the season, coach Petrino has decided that Houston Nutt and his ex-staff members did no coaching whatsoever, and the current group of Razorbacks is not only poorly coached, but the worst-coached players in America. With every game, we are witnessing Houston's negligence of this great program."

Anonymous players not wishing to be identified supported this theory and plan on testifying once the case goes to trial.

"Coach Nutt spent a good 45 minutes to one hour every practice showing us how to celebrate, call the Hogs, and just act crazy. I didn't even know what a three-point stance was when I got here. Now I do. Just barely," said one player.

"I didn't know I was supposed to fight off blocks," said one defensive player. "Coach Nutt just taught us to stay with the offensive player and hold our ground. Tackling was head down, lead with the helmet, and close your eyes. I'm lucky I'm still alive."

"I didn't know you were supposed to turn and find the ball in flight," said one defensive back. "We were taught to just try and keep up with the receiver. And if we couldn't, we were supposed to blame the safeties and/or linebackers."

"I was taught to catch the ball up against my body and round off my cuts on all my patterns," said one receiver. "Coach Nutt said that it was the quarterback's job to get the ball to me regardless of where I ended up."

"We were told that D-Mac and Felix would win games for us because they couldn't be stopped. He told the rest of us that they could run forever even without any blocking or help from the offensive line."

Coach Petrino is citing the recent games against Texas and Alabama as overwhelming evidence of the poorly coached players he inherited from Nutt. Testimony from players and film from this year's games will be submitted as evidence against Nutt. Jury selection could begin as early as next week. 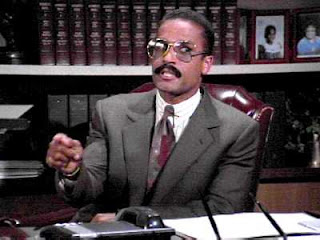