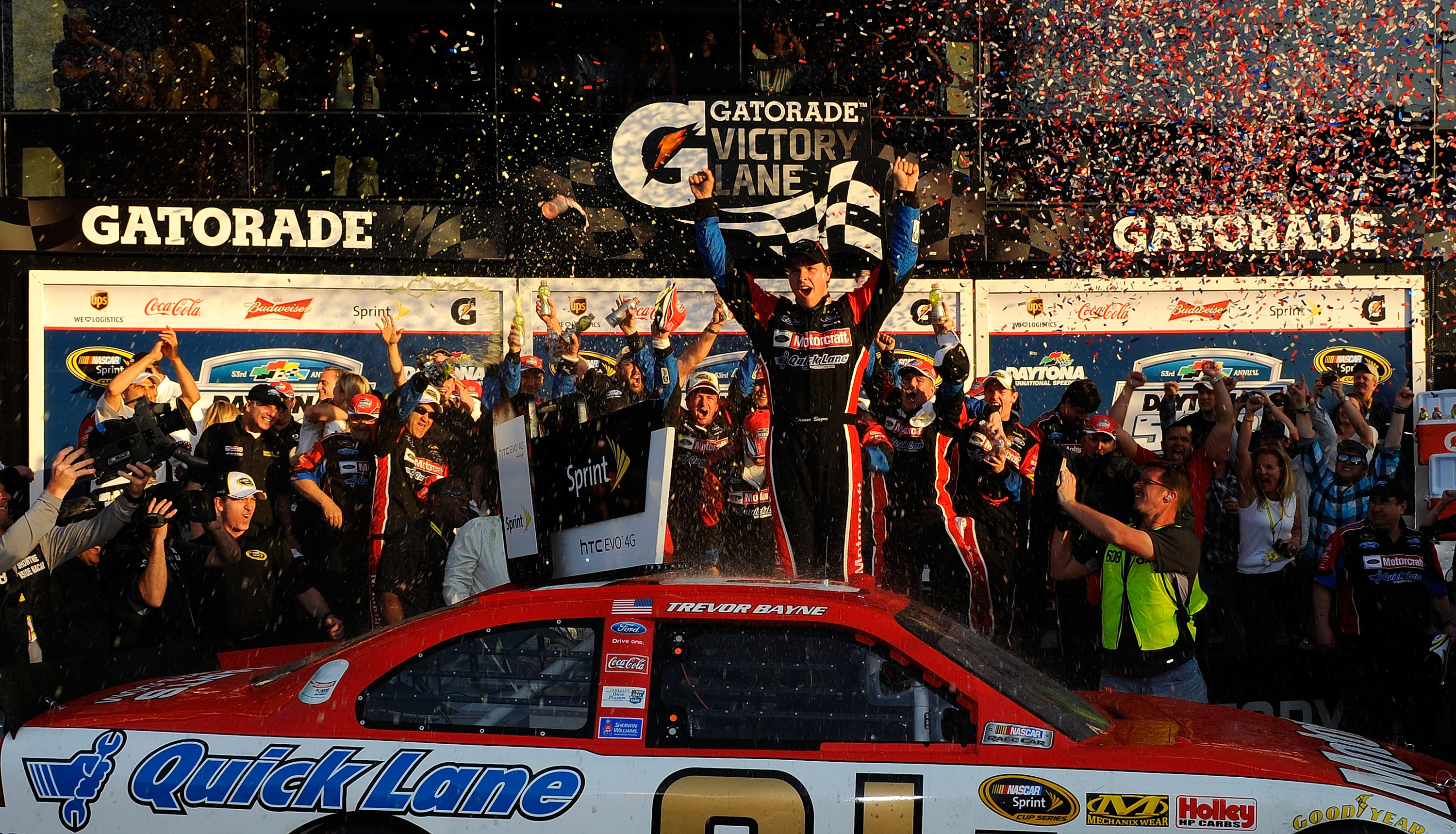 Trevor Bayne held off Carl Edwards in a green-white-checkered finish to become the youngest winner in Daytona 500 history at 20 years old and one day. He also became the second youngest winner in NASCAR's Sprint Cup Series history.

Bayne drove the historic No. 21 Wood Brothers car to victory lane at the Daytona 500 for the first time since 1976 when David Pearson glided his totaled car across the finish line after a last-second wreck with fellow Hall of Famer, Richard Petty..

"It's just bringing back the red-and-white car with the gold numbers that (David) Pearson drove—that just seemed like it put things back to normal," Wood Brothers Racing Founder Eddie Wood said.

The following is a list of drivers who will be in the chase after one week of racing. Enjoy! 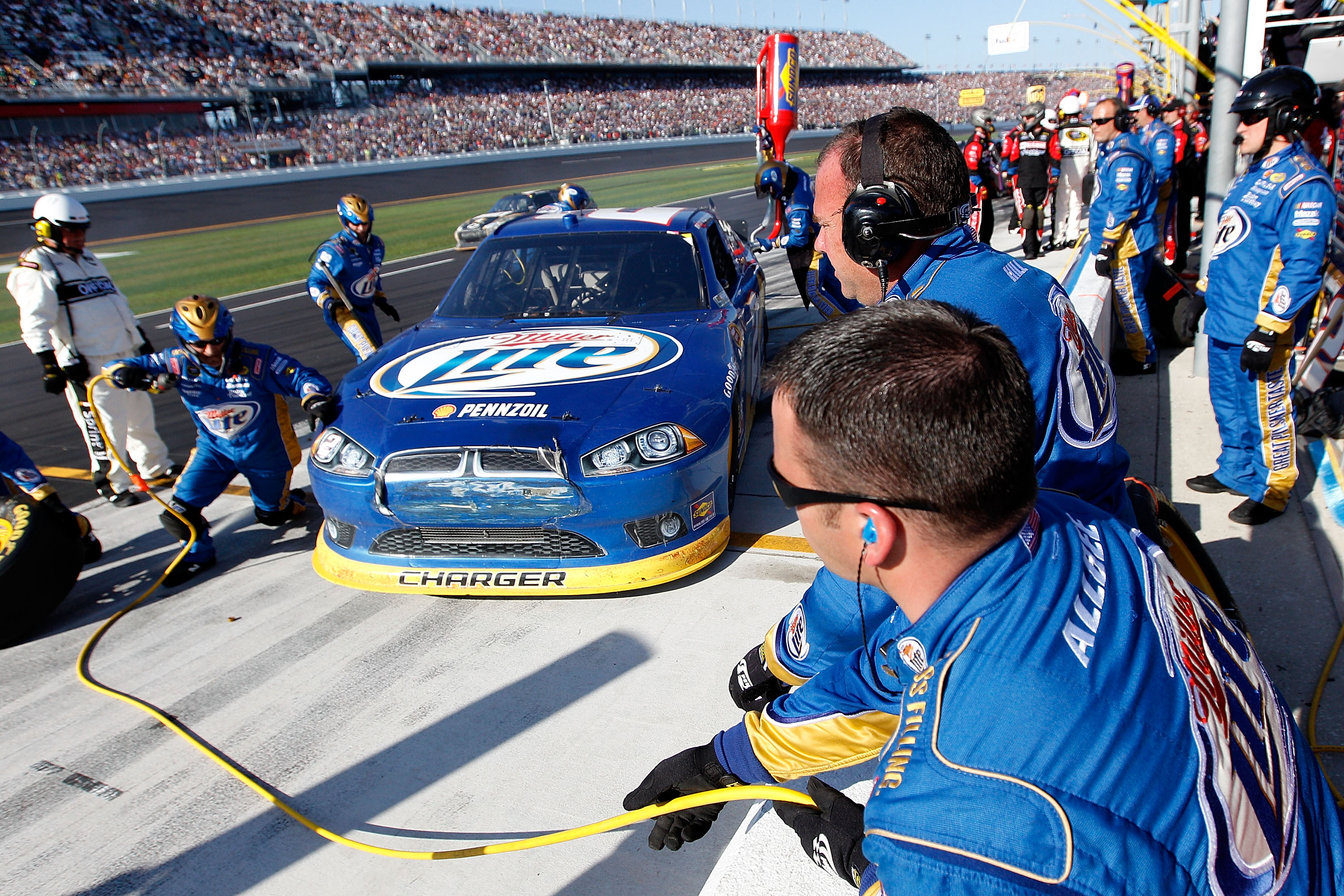 After jumping on board with Penske racing this offseason, Brad Keselowski was given the reigns to the No. 2 Dodge Miller Lite car that was driven by former Champion Kurt Busch and legend Rusty Wallace.

Keselowski may be newer to NASCAR, but at 27, he is no kid.

With a good showing at Daytona before being wrecked and finishing in 29th, Keselowski puts himself in a solid position to show the rest of the world how good he can be. 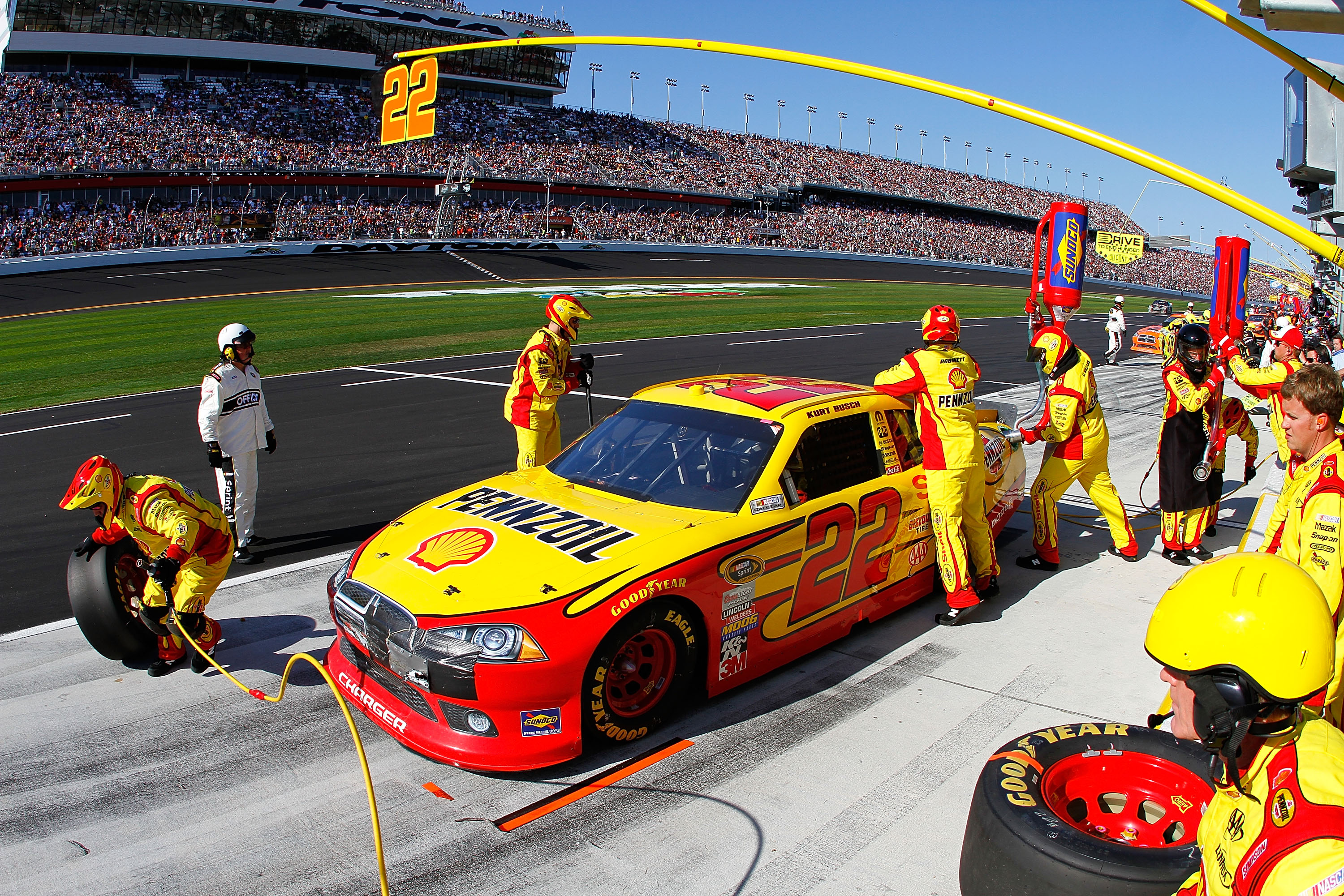 Kurt Busch jumped to the No. 22 Dodge Pennzoil car after giving up the Miller Lite car for team newcomer Brad Keselowski.

The team showed that the colors on the car didn’t matter and Busch finished in fifth place at the Daytona 500.

Busch is on pace to have a good year and as his team around him improves, the product they put on the track will improve. 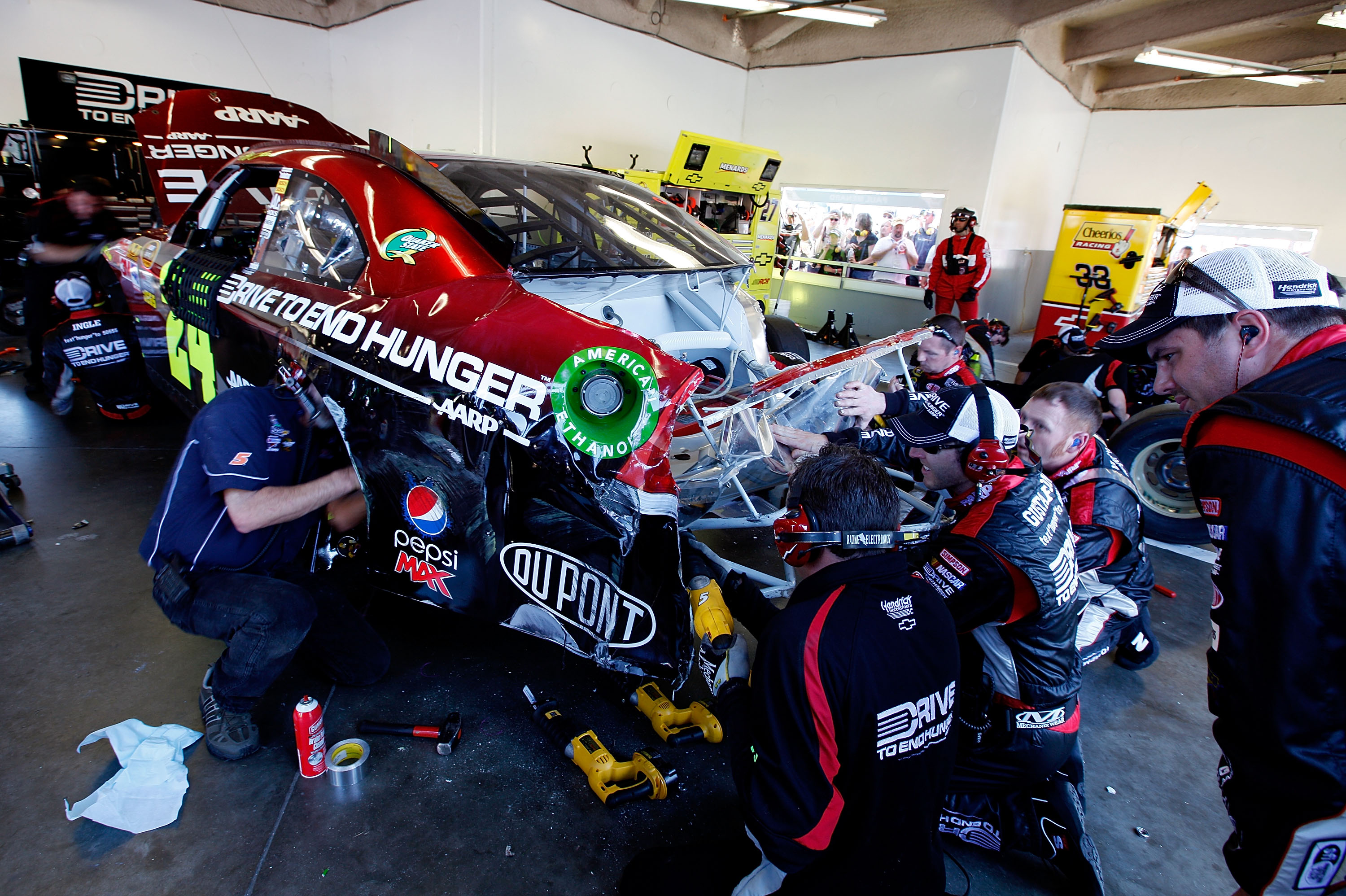 The Chase for the NASCAR Sprint Cup Series Championship is more fun when you have one of the best racers in the history of the sport involved—Jeff Gordon.

Gordon was involved in the 17-car pileup that sent him and defending five-time champion, Jimmie Johnson, to the garage early.

Gordon is a true racer and he will be back next week at Phoenix ready to race. 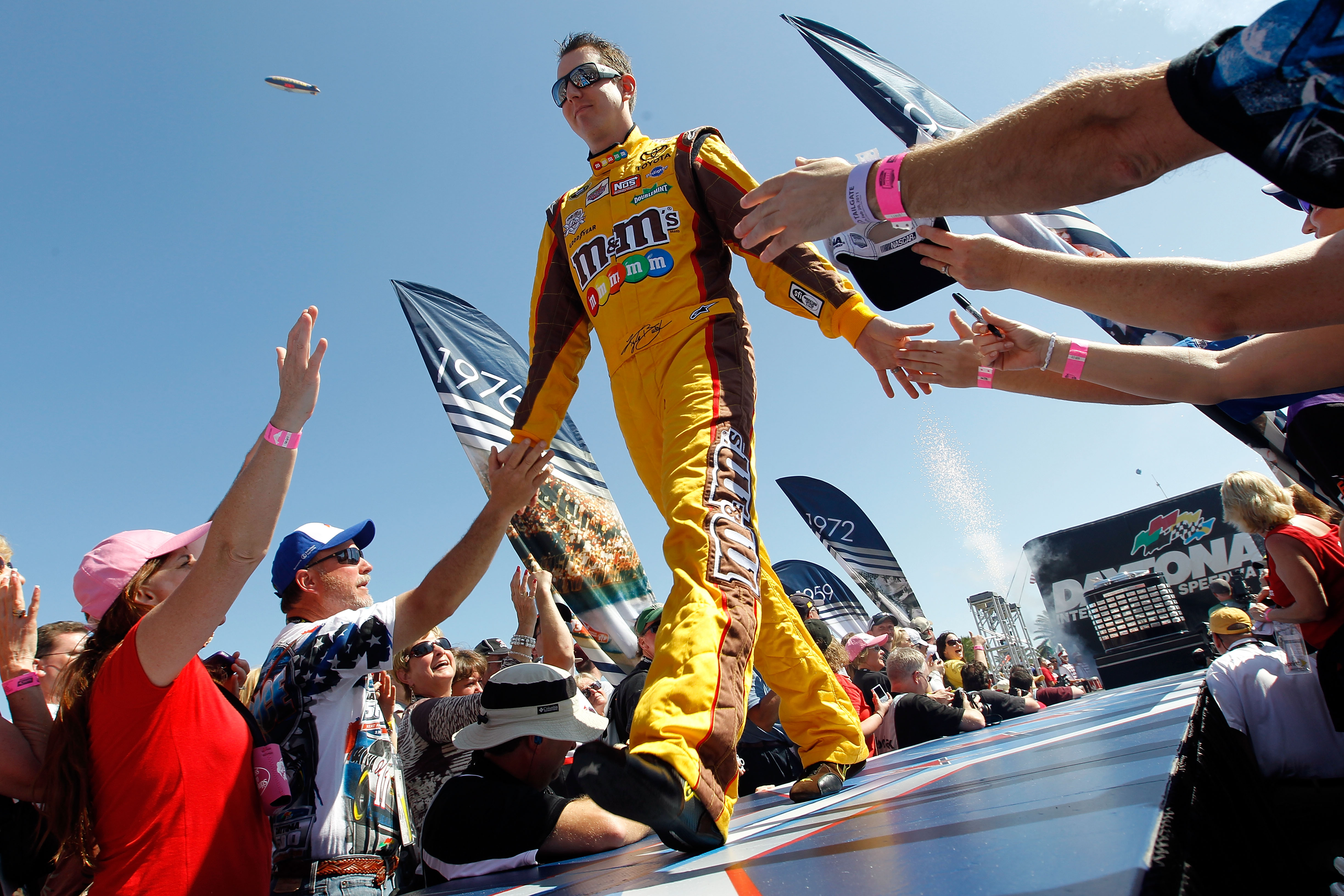 Kyle Busch has been the ultimate Checkers-or-Wreckers driver since he came into the Series, and his wild style has gotten him in trouble at times.

Although he can be crazy, Busch stayed calm during the Daytona 500 and overcame getting spun-out early to finish the race in eighth place.

If Kyle Busch can control himself like he did at the Daytona 500, he will be a serious contender for the Sprint Cup Championship. 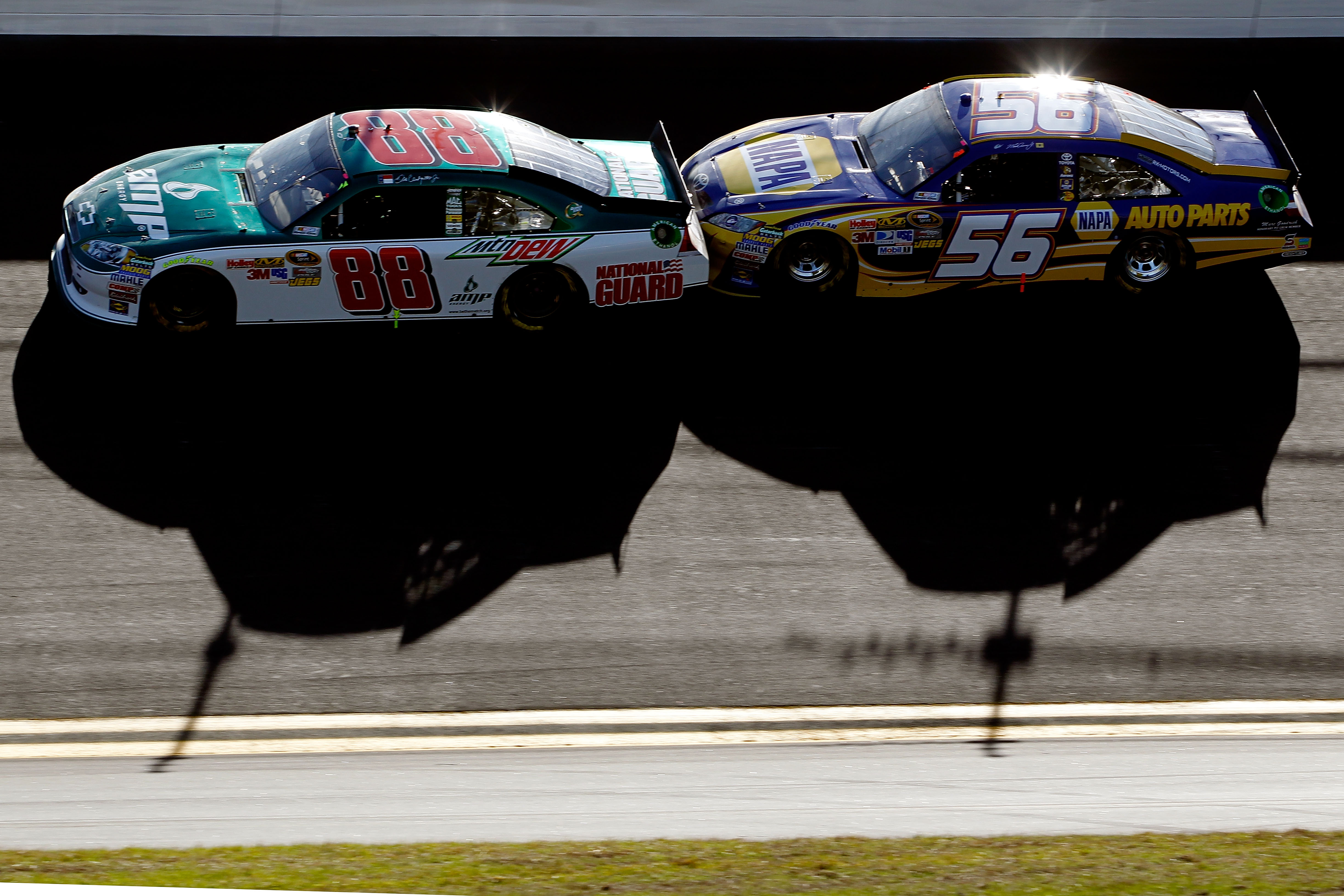 After an emotional week in Daytona, it will be back to working hard and driving cars for Dale Earnhardt Jr.

With new crew chief Steve Letarte at the helm, Dale Earnhardt Jr. hopes to use the mojo from the Jeff Gordon team to bring back his winning ways.

Earnhardt Jr. was running solid all day and would have been a real contender for the win if he didn’t wreck late in the race, thanks to a terrible move by Robby Gordon. Junior finished 24th. 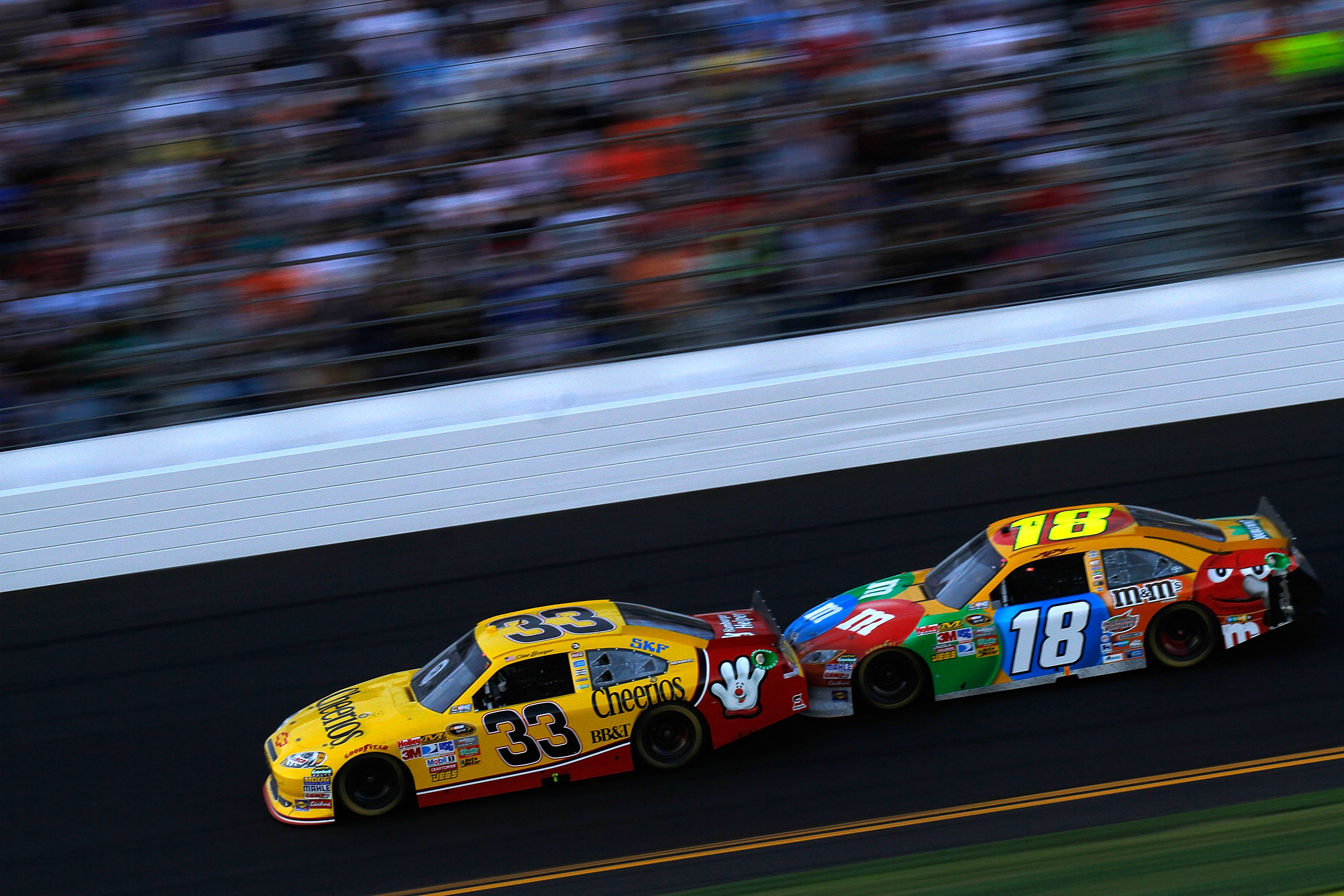 While it wasn’t a great day for Richard Childress Racing at the Daytona 500, Clint Bowyer looked to be making another run at getting into the Chase this year.

Bowyer managed to finish in 17th place after being involved in an early accident.

All of the Childress motors had issues, but that hasn’t been a common theme in the past—a quick solution seems likely. 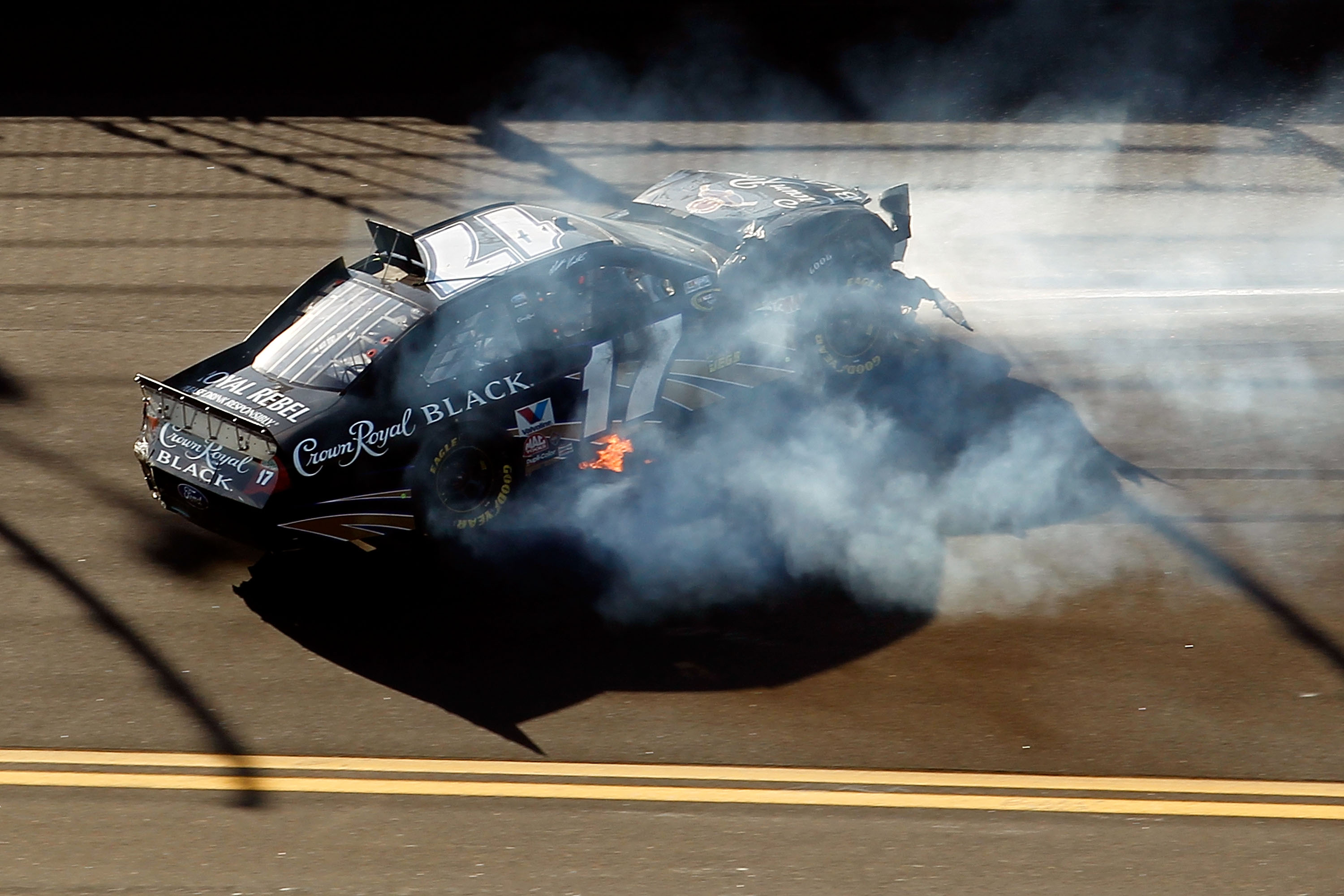 After a disappointing 2010, Matt Kenseth and the No. 17 team look to bounce back with a successful 2011 run for the Championship.

Kenseth was wrecked by teammate Greg Biffle after qualifying in ninth.  Kenseth went on to finish in 34th place.

Although the season didn’t start as Kenseth would have liked, he is the most consistent racer on the circuit and the new points system suits him well. 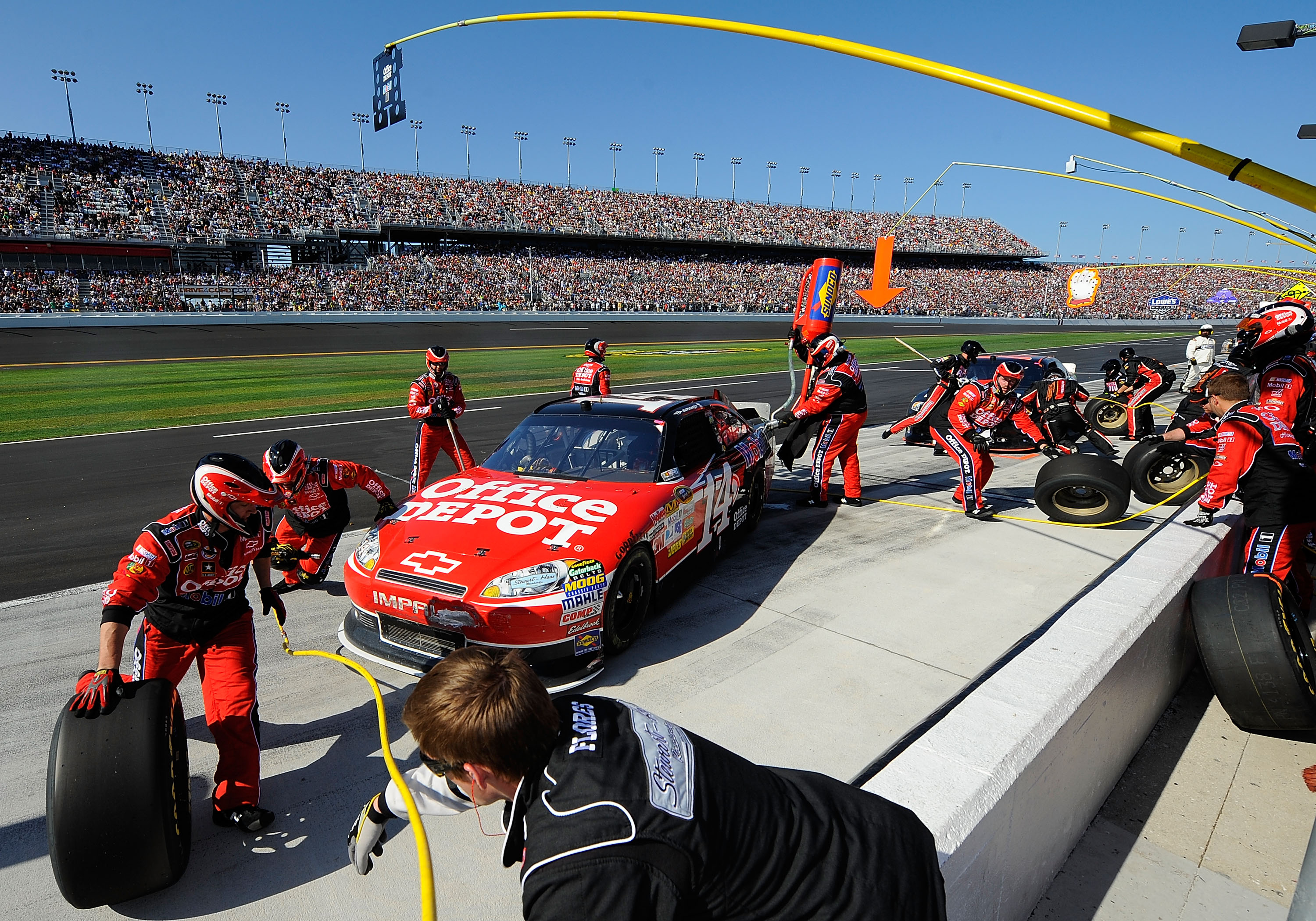 Tony Stewart had a solid day in Dayton, and a 13th place finish is a huge start for a still fairly young team and company.

Stewart started in 25th place and worked his way through the field while staying out of trouble to finish with a good top-15 finish.

Stewart looks to put his No. 14 Office Depot Chevrolet into victory lane often this season, but his bigger goal looks to be a run at the Nascar Sprint Cup Series Championship. 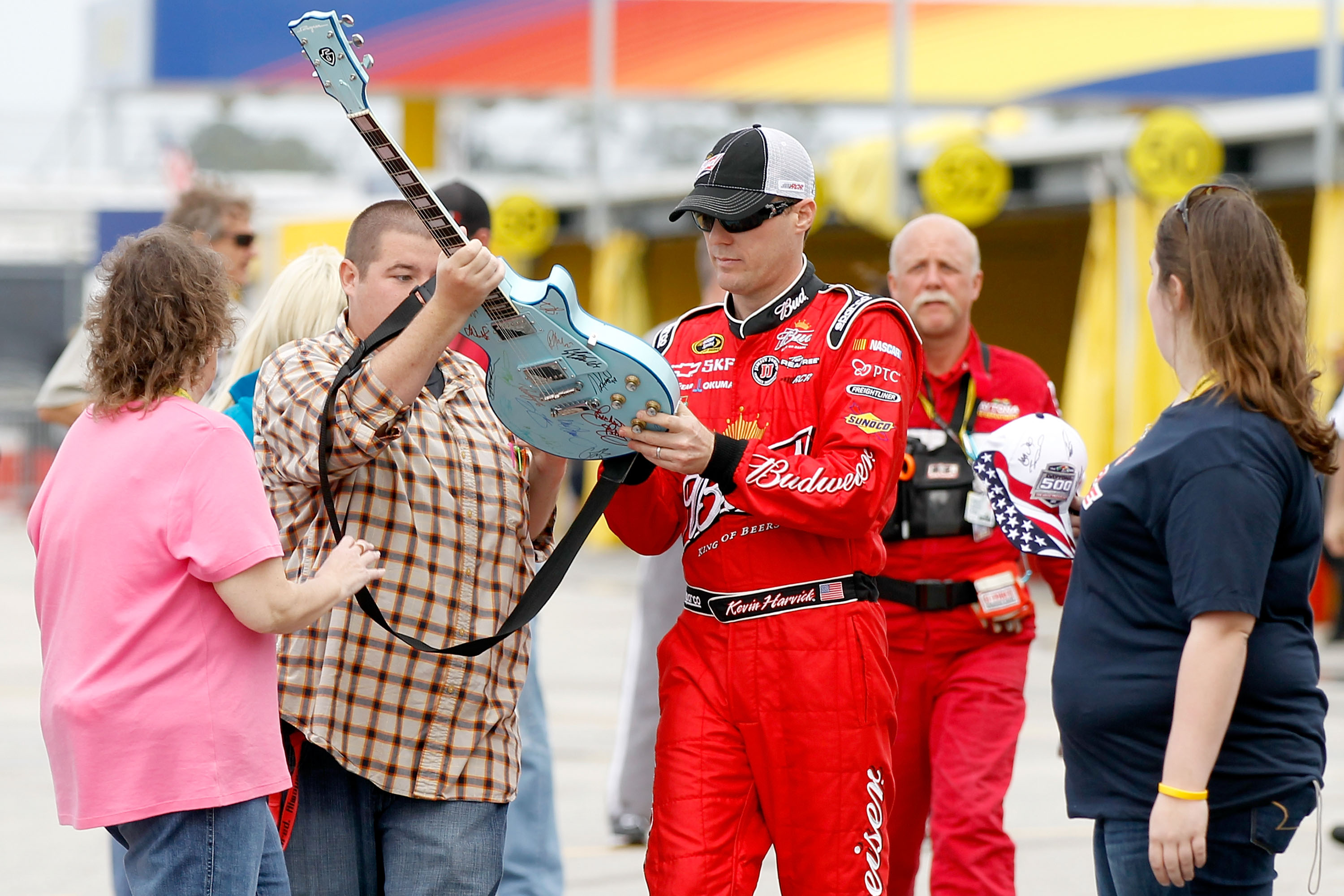 It is a very long NASCAR season and it will remain to be seen how Kevin Harvick and the No. 29 Budweiser Chevrolet bounce back from a 42nd place finish at the 2011 Daytona 500.

Harvick is very consistent and the 42nd place finish will not affect him in the long run.  Richard Childress Racing is too good of a team to not fix the motor problems they faced Sunday at the Daytona 500.

Harvick is a big-time contender, and given his recent success at the Cup level, he will undoubtedly be in the mix at the end of the season for the Sprint Cup Series Championship. 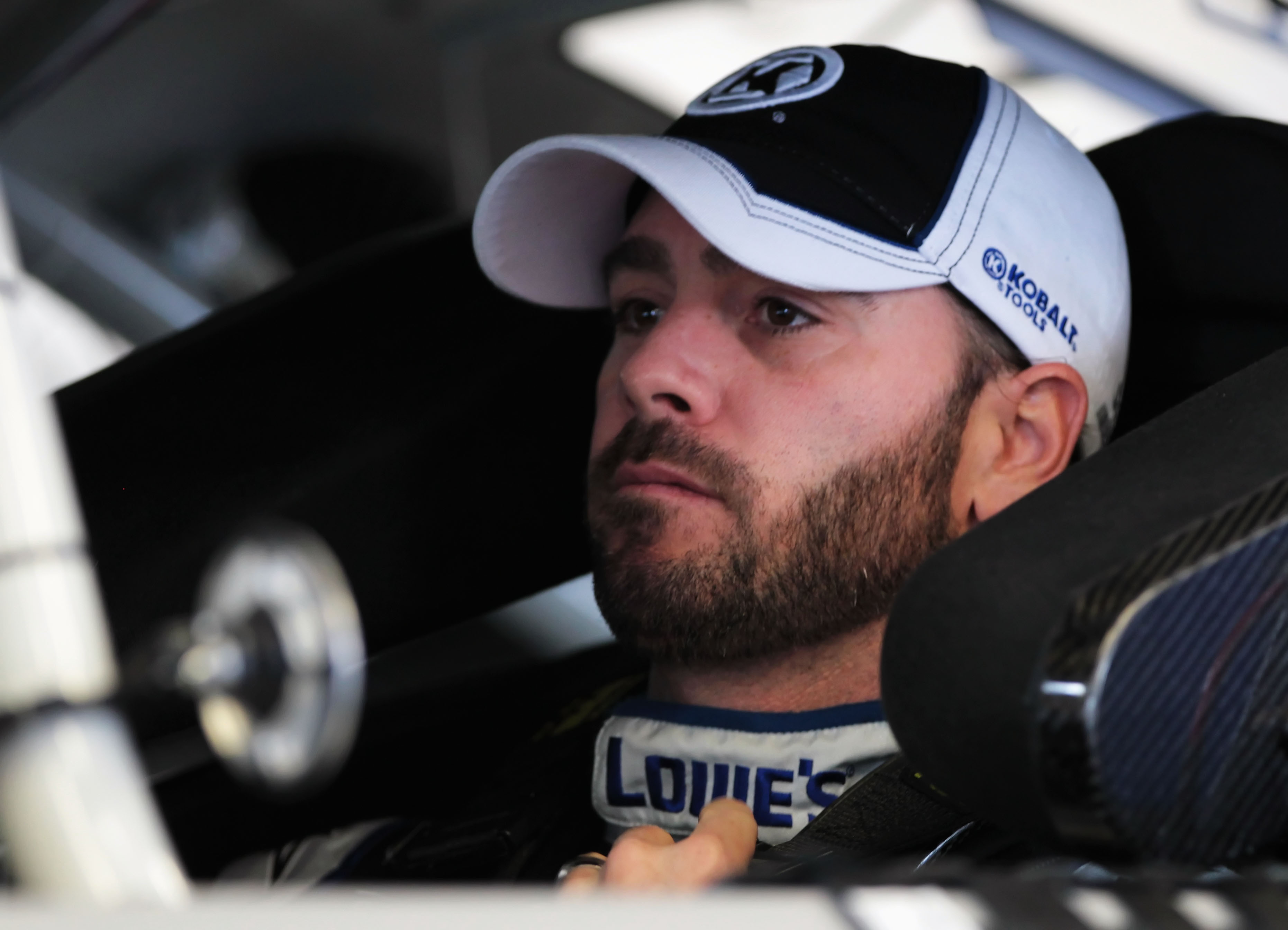 When you’re a five-time defending champion of any sport, you better believe every team will be aiming for you.

Jimmie Johnson has a huge target on his back, and he doesn’t seem to mind.

The No. 48 Lowes Chevrolet piloted by Johnson was involved in the big accident on lap 29 that claimed over 14 damaged cars and forced Johnson to finish the race in 27th position.

Knowing Johnson and the whole Lowes team, they will never let this impact them—they will be at the front of the pack next week in Phoenix. 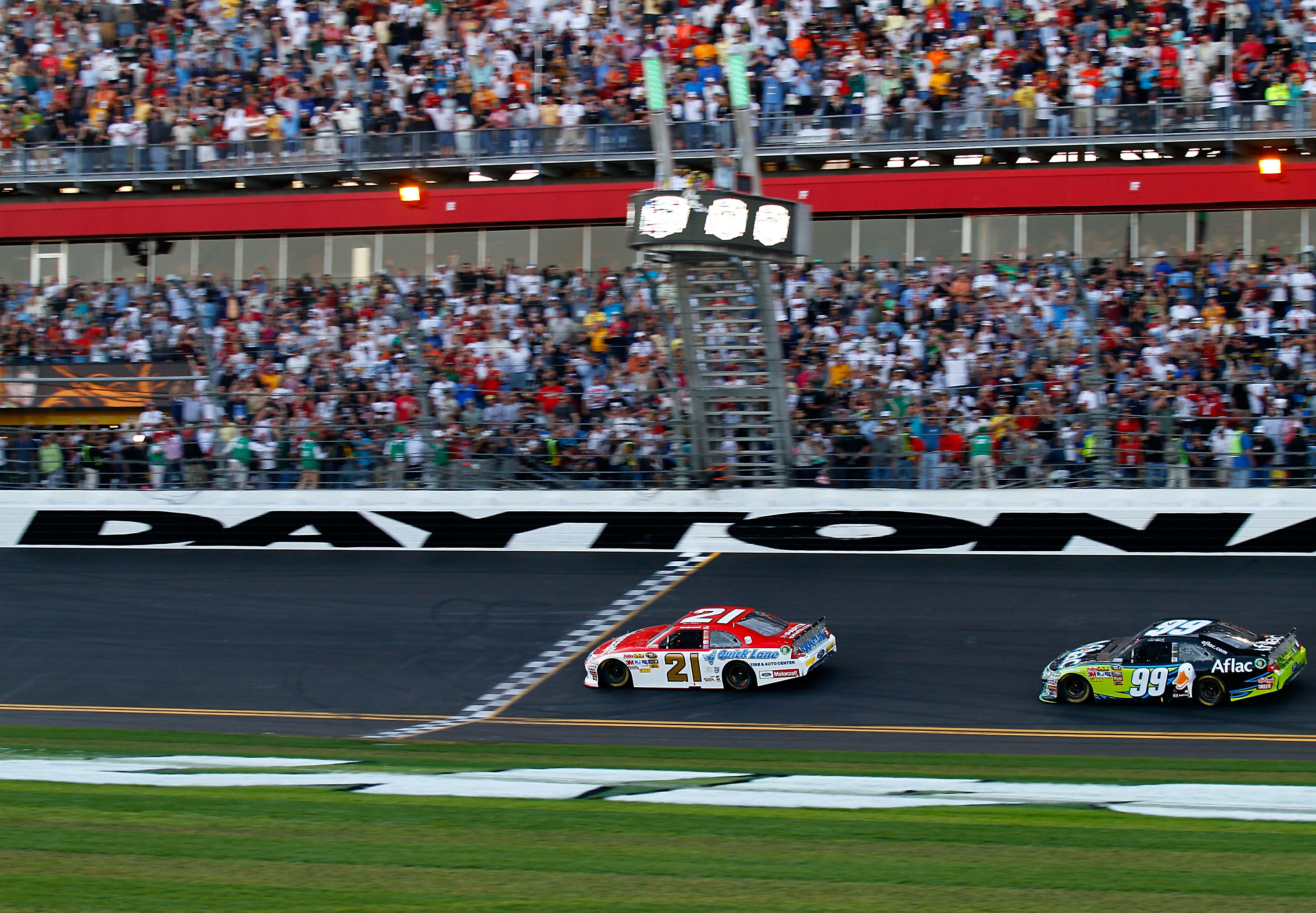 Carl Edwards is so nice it can be frustrating, but his style of racing is built to win with the current points format.

Edwards finished second in the Daytona 500 and looks to build on that success as well as his success from the second-half of last season to make a push for a Championship.

The No. 99 Aflac Ford looked solid in every facet of the race and Carl Edwards looked as ready as ever to get his team into the Chase again this season. 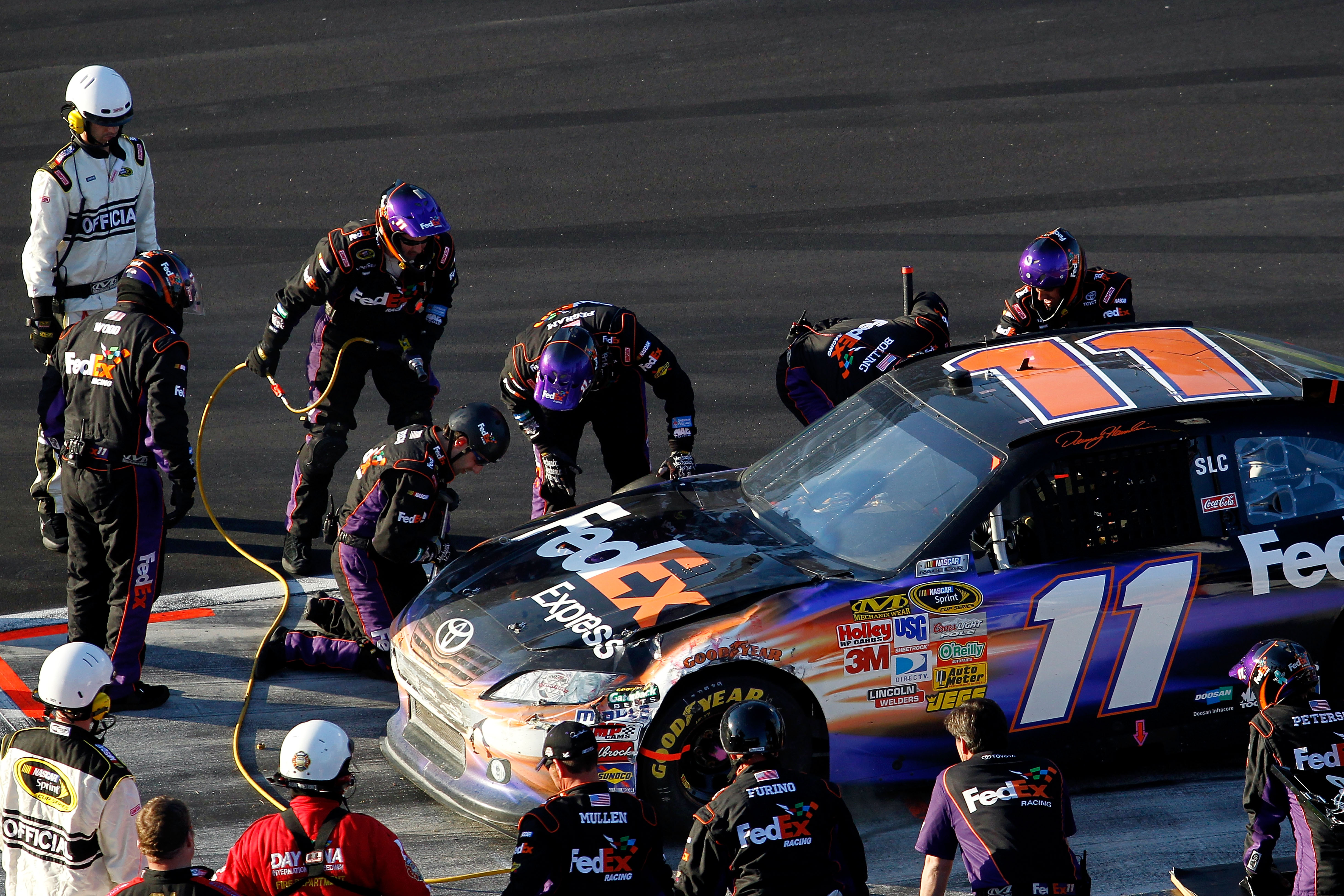 I believe that at the end of the 2011 season, Denny Hamlin will be the one hoisting the Sprint Cup Series Championship Trophy.

Denny Hamlin was involved in an accident early but got the repairs he needed to get back on the track and finish a respectable 21st place.

Although Hamlin’s finish at the Daytona 500 wasn’t great, the No. 18 Fed-Ex Toyota has been very successful since he came to the Joe Gibbs race team. He'll look to turn that season's success into a Series Championship this 2011 season.