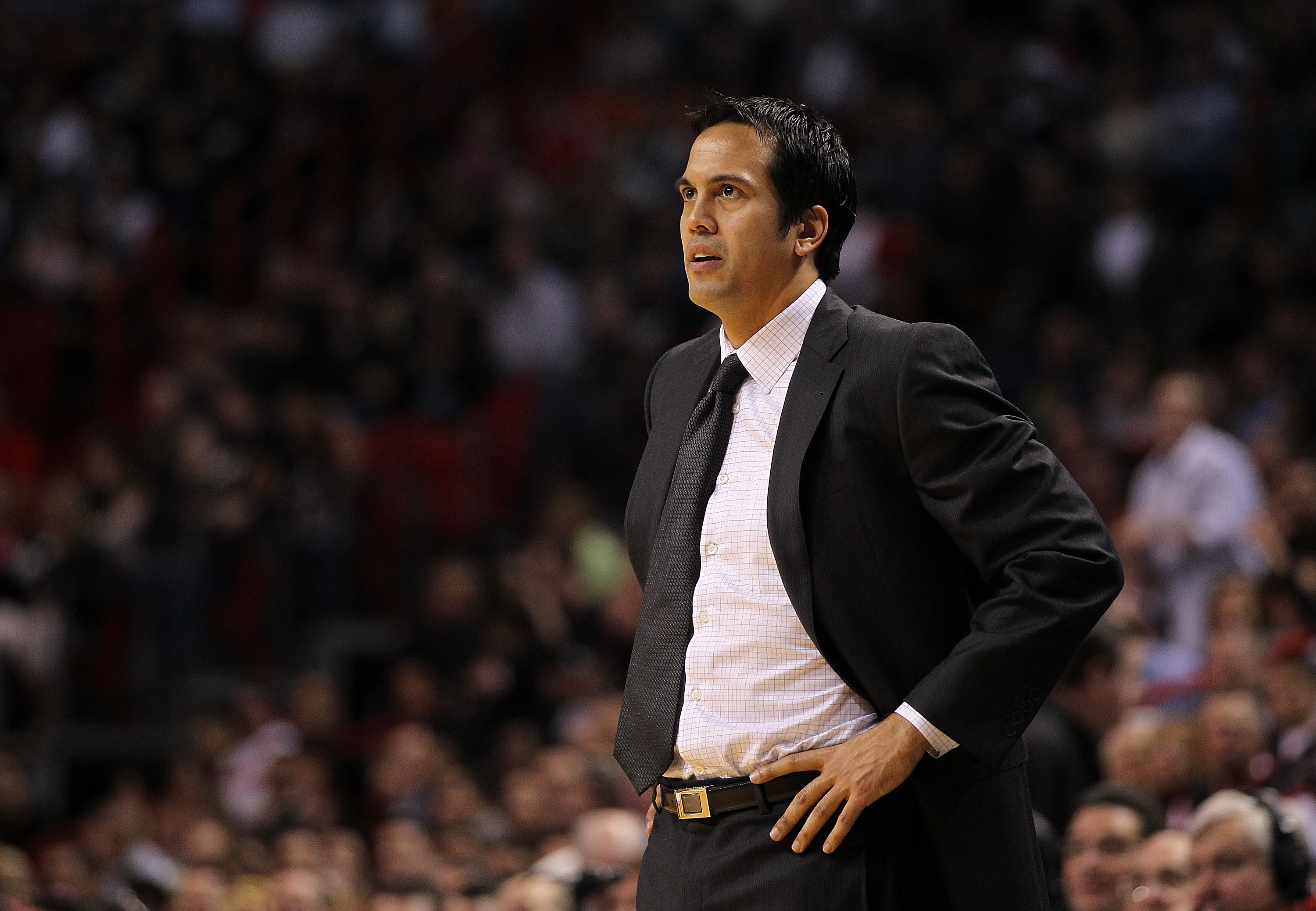 LeBron James found himself at center a couple of weeks ago against Portland.

With Chris Bosh out indefinitely (they say a couple of weeks) with the dreaded high-ankle sprain, Spoelstra will be forced to continue to do much of the same.

Let's take a dive into the young coach's thought process with some unique combinations. 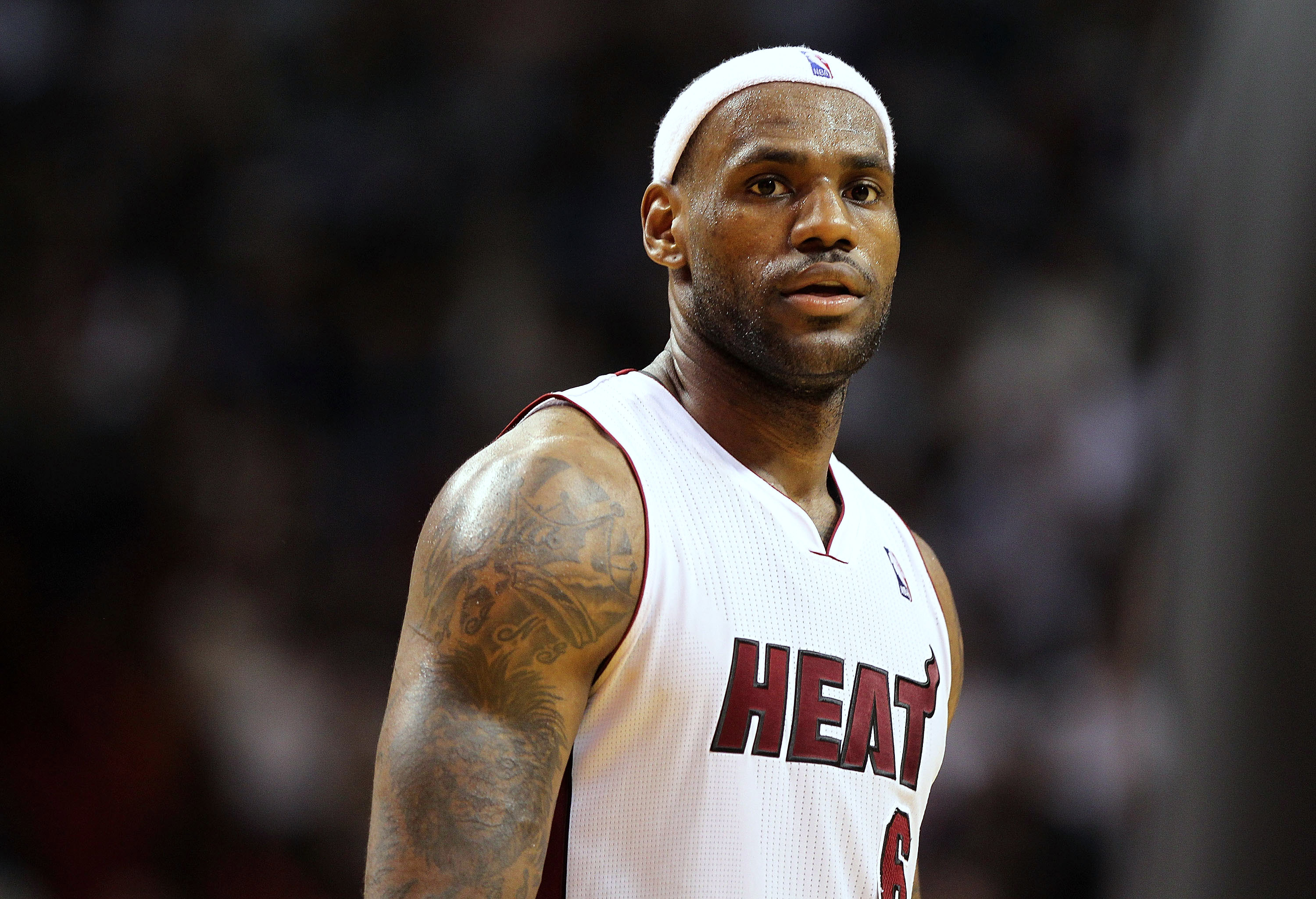 It's a point guard; it's a center; no, it's LeBron James!

LeBron is the most versatile player in NBA history. A bold statement I know, but I didn't think twice about writing it.

At 6'8" and in the ballpark of 270 pounds—with an absurd combination of strength and speed—he can play any position on the court and play it well. But where he intrigues me the most is at the four and five spots.

No big man in the league can match up physically with this freak of nature. Defensively he can bang with the bigs, and on offense he could pulverize any power forward or center he would face with a devastating faceup game in space.

It would also be a way to get an opposing star big man in foul trouble rather quickly.

9. D-Wade and LeBron: The League's Most Devastating Pick and Roll? 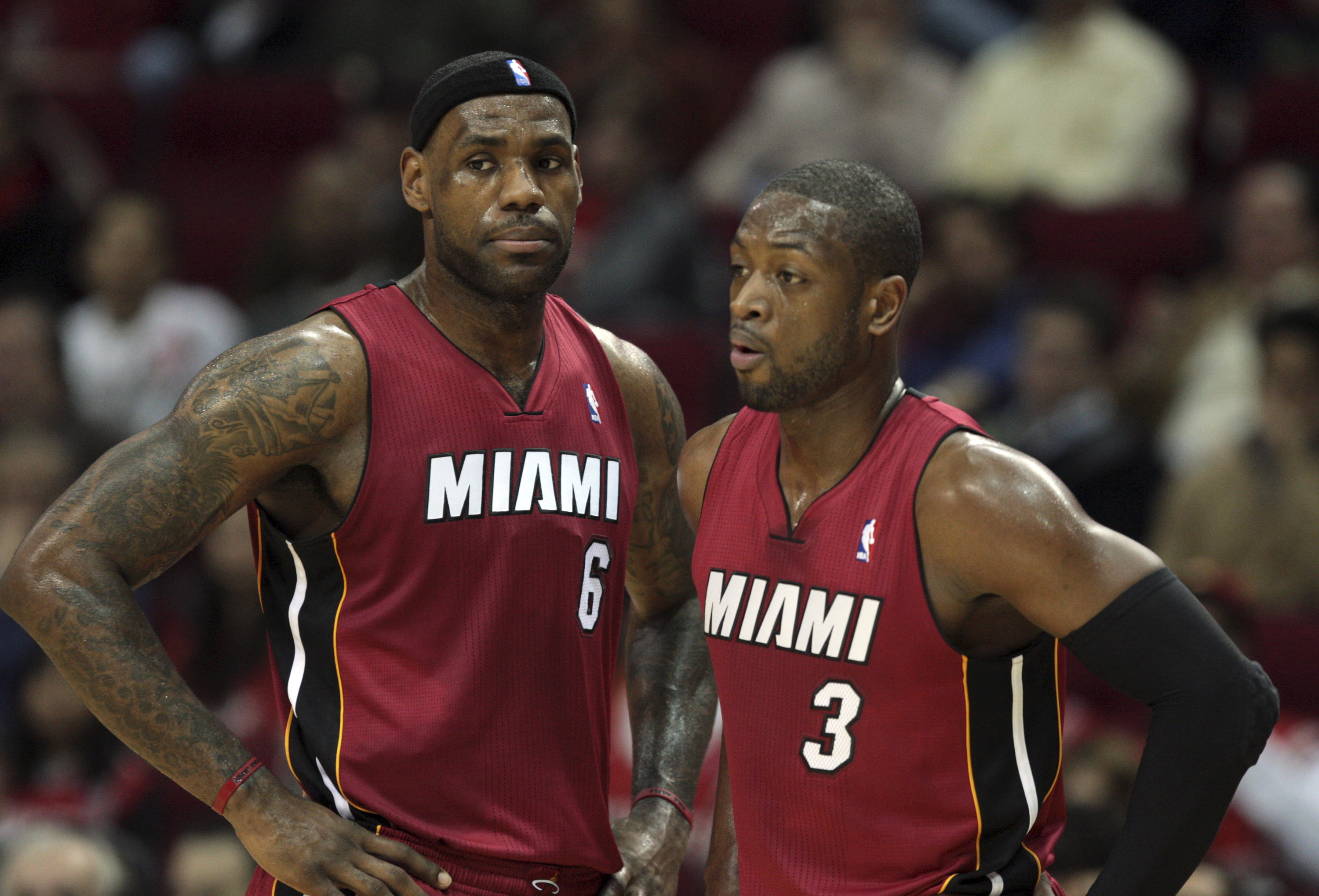 Not once in LeBron's career has one of his coaches had the luxury of placing him as a picker on basketball's universal bread-and-butter play, the pick-and-roll.

Well Spoelstra has his chance, and we saw a little of that last week against Toronto. If Amar'e Stoudemire can be a monster finisher in this area, so can LeBron.

Who's going to stop the two best scorers in the league at basketball's ultimate team play?

If you have an answer to that question, please don't sound like a fool by putting it into words.

8. Have Fun by Going Small 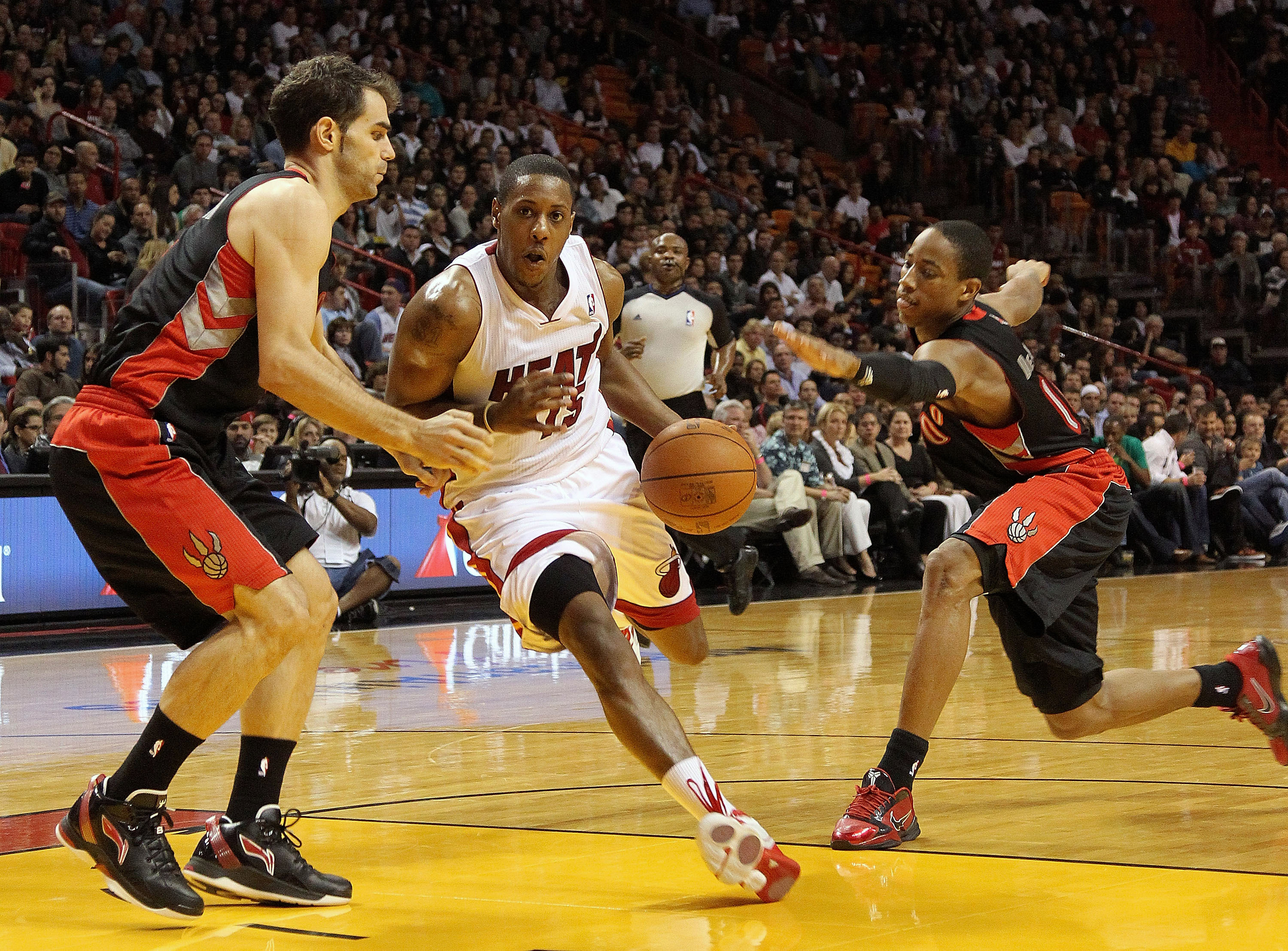 There's no question most NBA playmakers prefer an up-and-down game. It's more fun and it means more shots.

Without Bosh for some time, they will have to go in small spurts. How about this lineup against the league's less gargantuan teams?

Play James at center, Mike Miller at four, Wade and House on the wings and Chalmers at point. Talk about a high octane offense.

No, they wouldn't be able to do this against the likes of the Spurs, Lakers or Celtics, to name a few teams, but they could thrive in "small ball" against the teams like the Knicks, Suns and Warriors.

That lineup would be like the dynamic Sun's teams from a few years ago, but injected with artificial adrenaline. 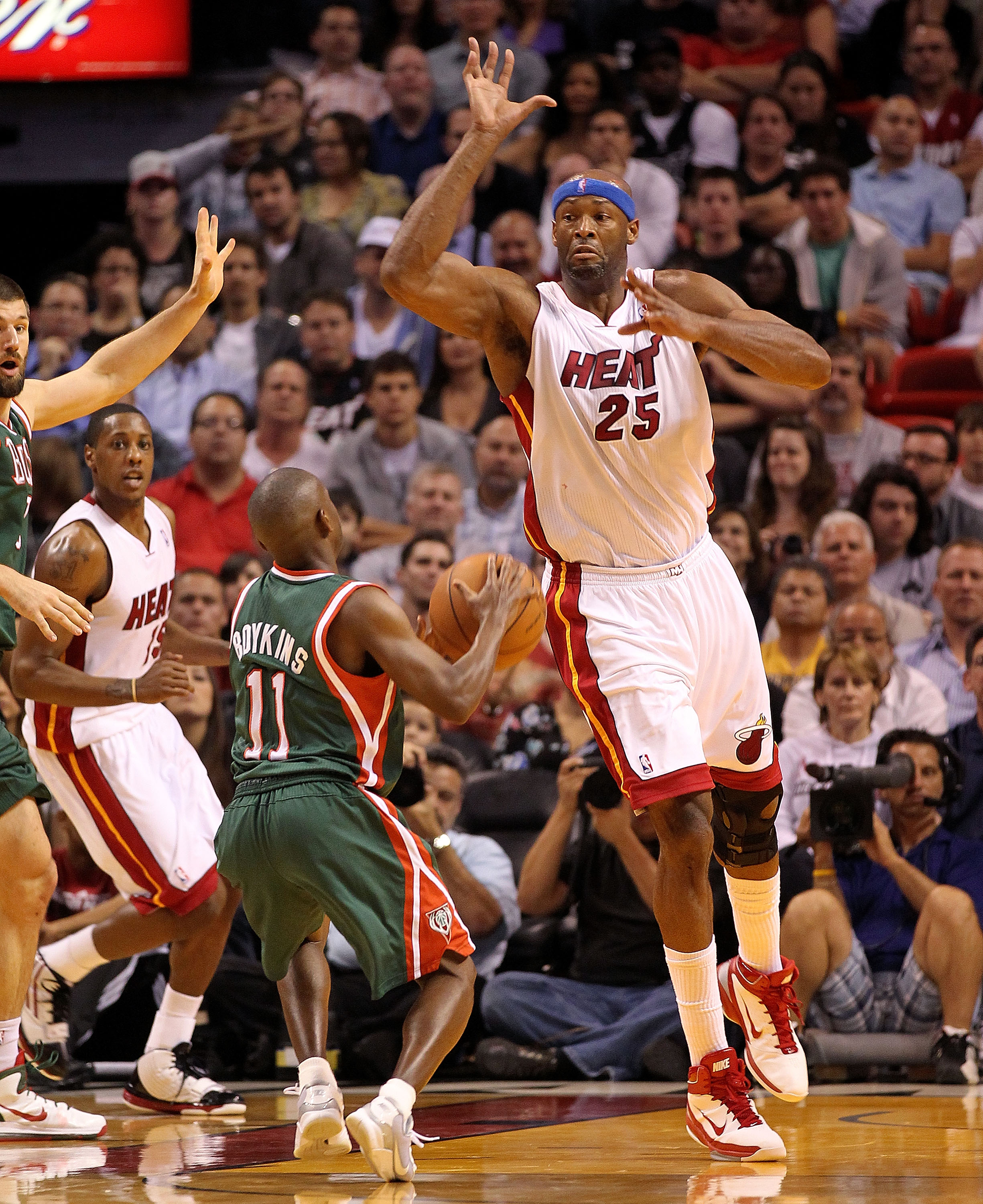 Erik Dampier was brought in for one reason. Beef.

The Heat lacked a center who could bang down low and muscle people around. Damp came calling.

Play a lineup of Dampier at center with LeBron at the point and throw Wade, Miller, and Juwan Howard in between. They could title that lineup "Rocky" or "Celtic Killer," depending on the opponent.

And when Udonis Haslem returns, throw him in for Howard and you've got yourself a winner. 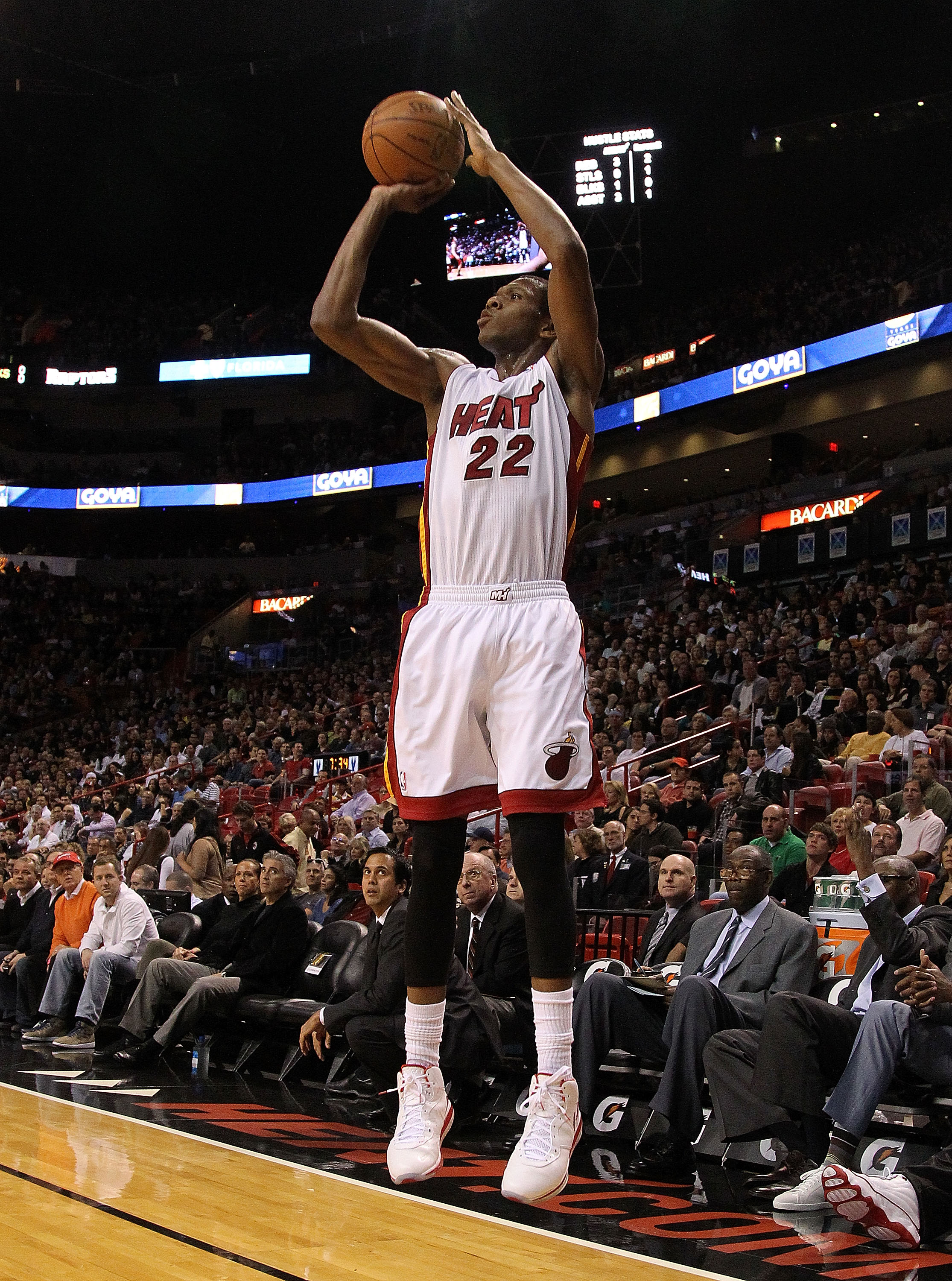 The only way to slow down two ruthless attacking wings like Wade and James is to pack the paint tighter than Ines Sainz's jeans. And she claims they're "normal size." Even with that ham, who's she kidding?

Shooters force the "Sainz Defense" to spread out more and space the floor.

I want to see a lineup of the three stars in Bosh (when he returns), Wade and James along with the team's two best shooters in Miller and Jones.

Who in their right minds is stopping that juggernaut? 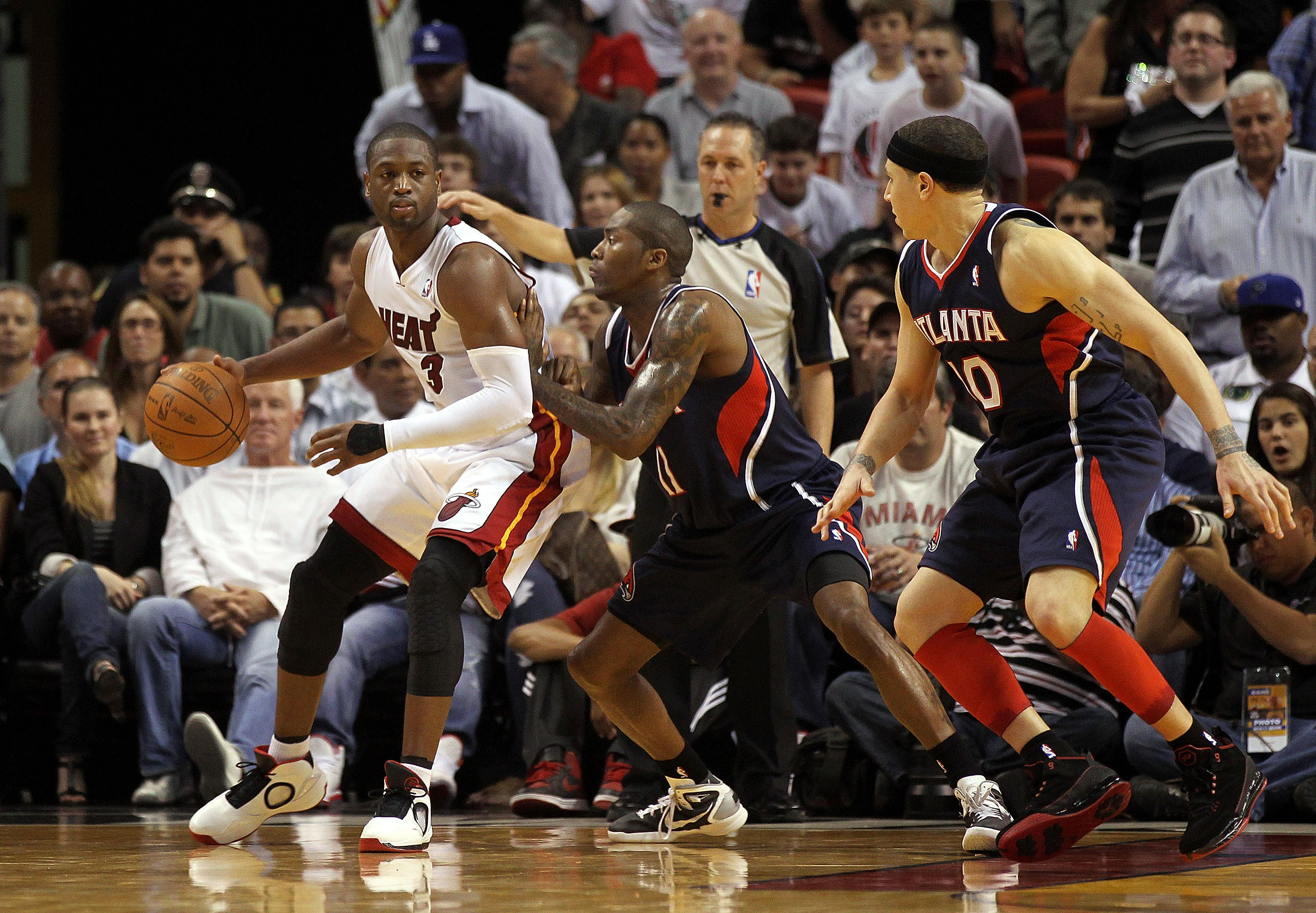 It's easy to stand around and watch when Wade or James has the rock. After all, they're incredible showman.

And I know it's not typical for one of those two to suddenly transform into a slasher off the ball. But for the two to coexist offensively, it must be done.

In the playoffs—when the game slows down—they won't be able to run the other team into the ground when Wade and James are on the court.

They need to find ways to both become effective at the same time. There is only one ball.

Wade is starting to get the hang of this. You'll see him dive towards the middle of the point when LeBron is creating on the wing.

Neither is a true spot-up shooter, so they need to get creative when it comes to this concept of attacking the defense away from the ball. 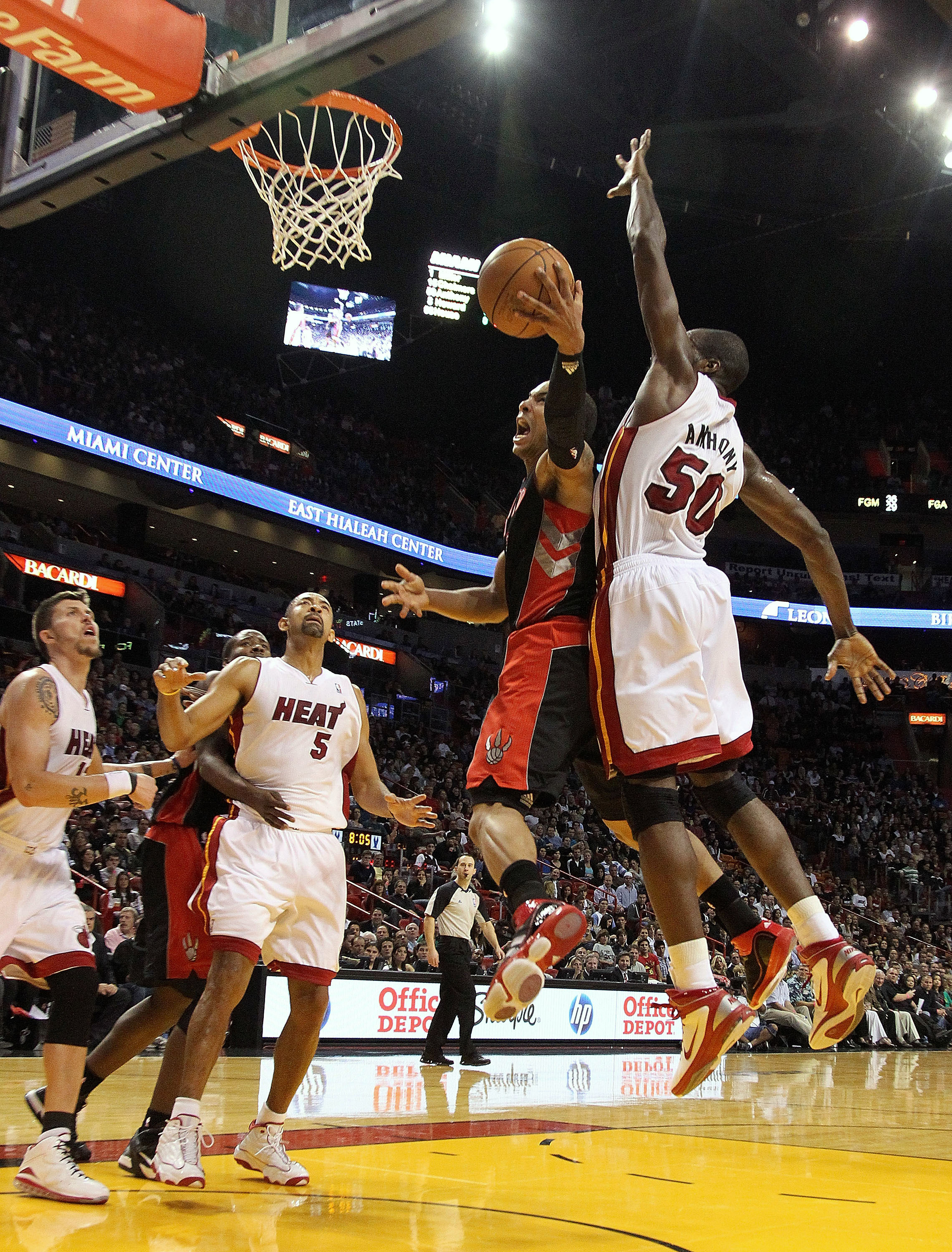 It's no secret this team has one goal and that's to win a championship.

It's hard to remain focused over the course of a too-long 82-game schedule. The hardest part for Spoelstra before the postseason will be to motivate.

We've seen this team hit major highs and lows already, and keeping them on track will be important. Getting the top seed is a big deal as well, as home-court advantage could be the difference between getting to the Finals and going on vacation earlier than they'd like.

He needs to set intermediate goals to keep the team interested. Win 10 games in a row at home. Hold teams to under 40 percent shooting. Things like that. 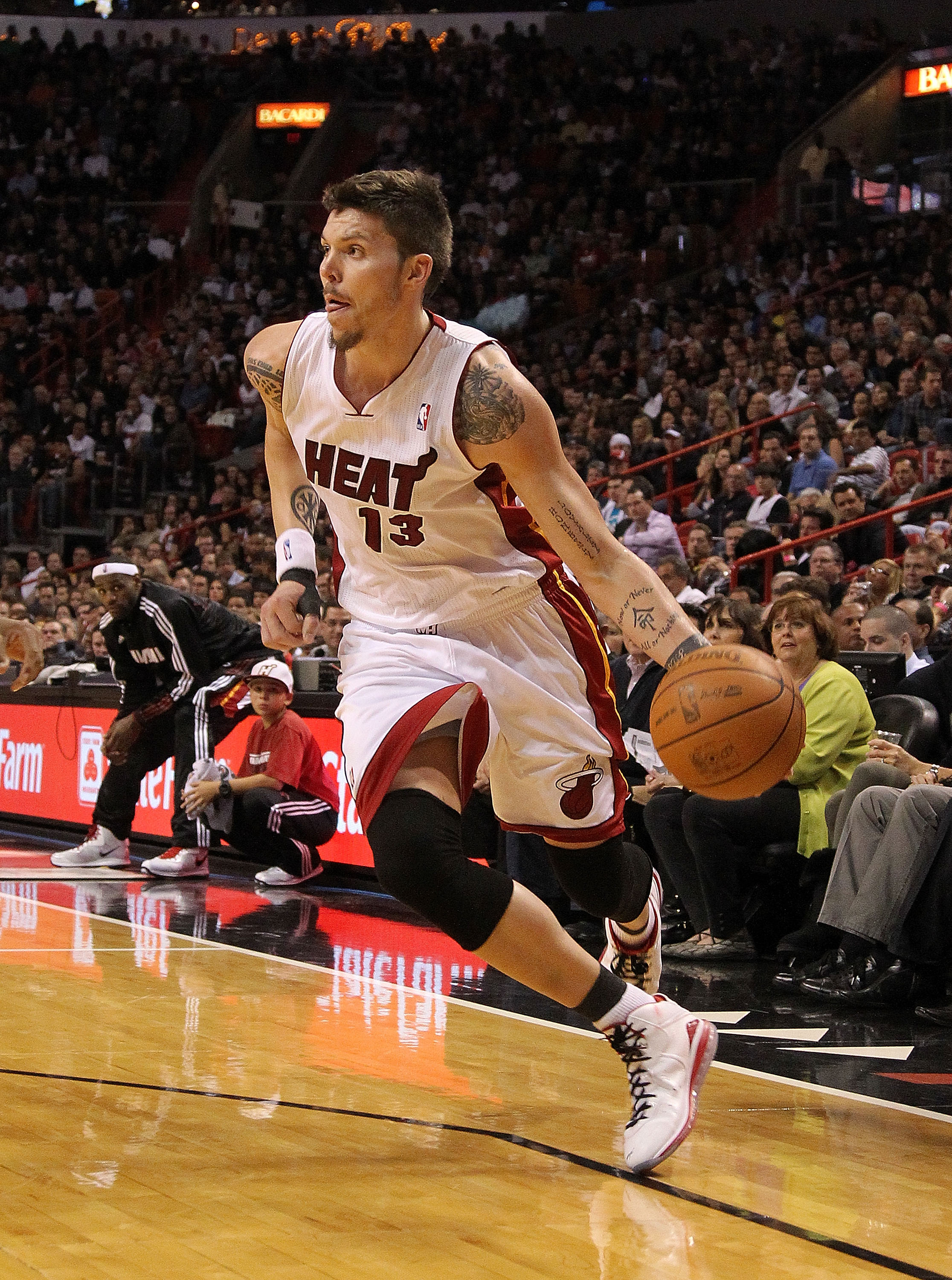 I understand LeBron and Dwyane think and usually can score at any time of their choosing. But sometimes both of them force the issue.

They need some of Miller's unselfishness in them. Just a little.

Shot selection is going to be very important come playoff time. Teams are going to beg the Heat's superstars to chuck it up from deep.

They need to remember, this is a game about efficiency. Play as a team and get the best shot. 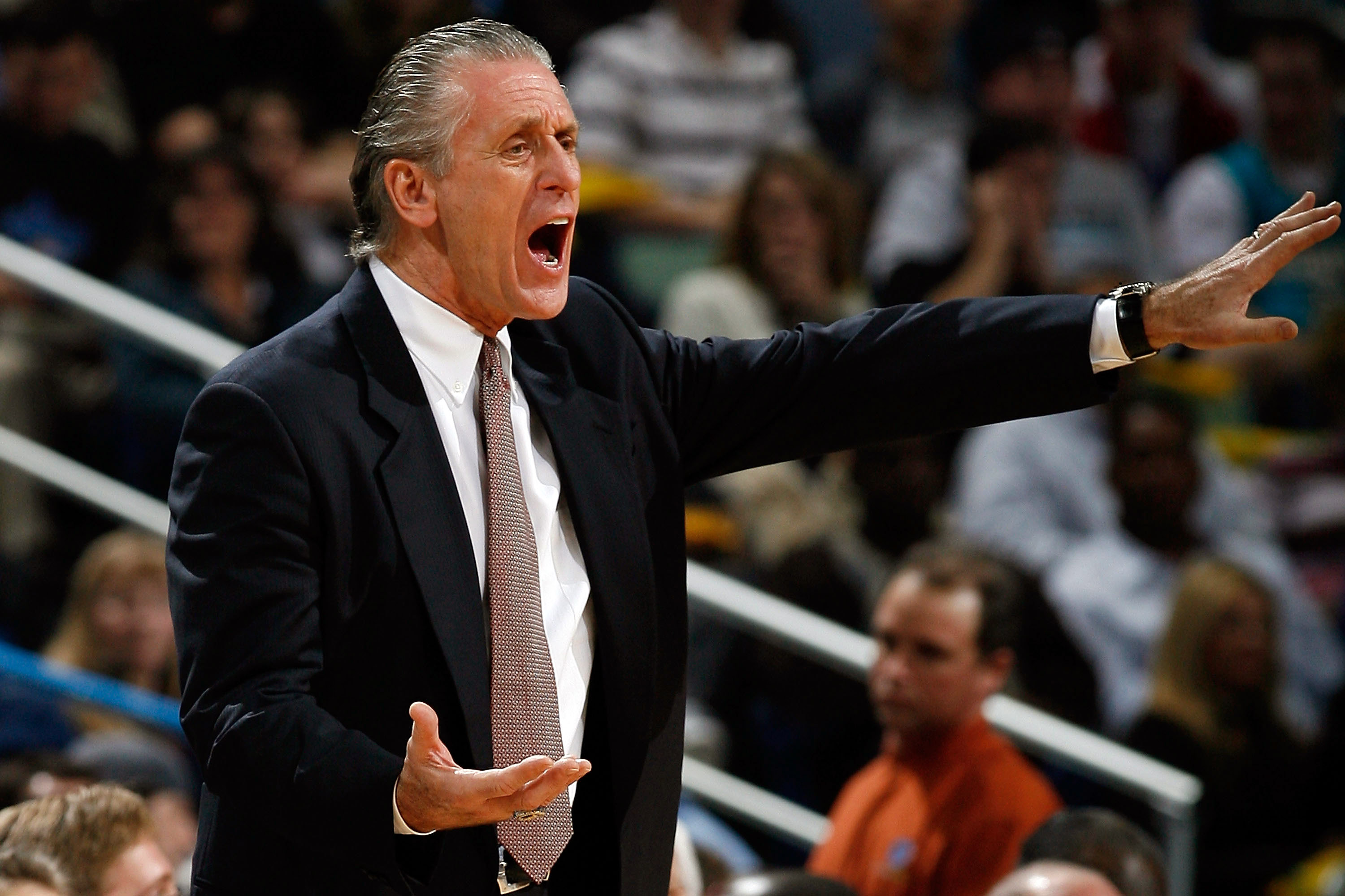 I realize Spo is a Pat Riley disciple. That means intense practices, hours working grinding and defensive intensity every night.

But the most important thing for this team come playoff team will be health. Miami doesn't have the luxury of a deep supporting cast and can ill afford a significant injury to one of the three stars.

He needs to remember at all times this is a marathon, even if it means losing regular season games to win down the road in the playoffs.

It's all about the hardware.

1. It's There for the Taking 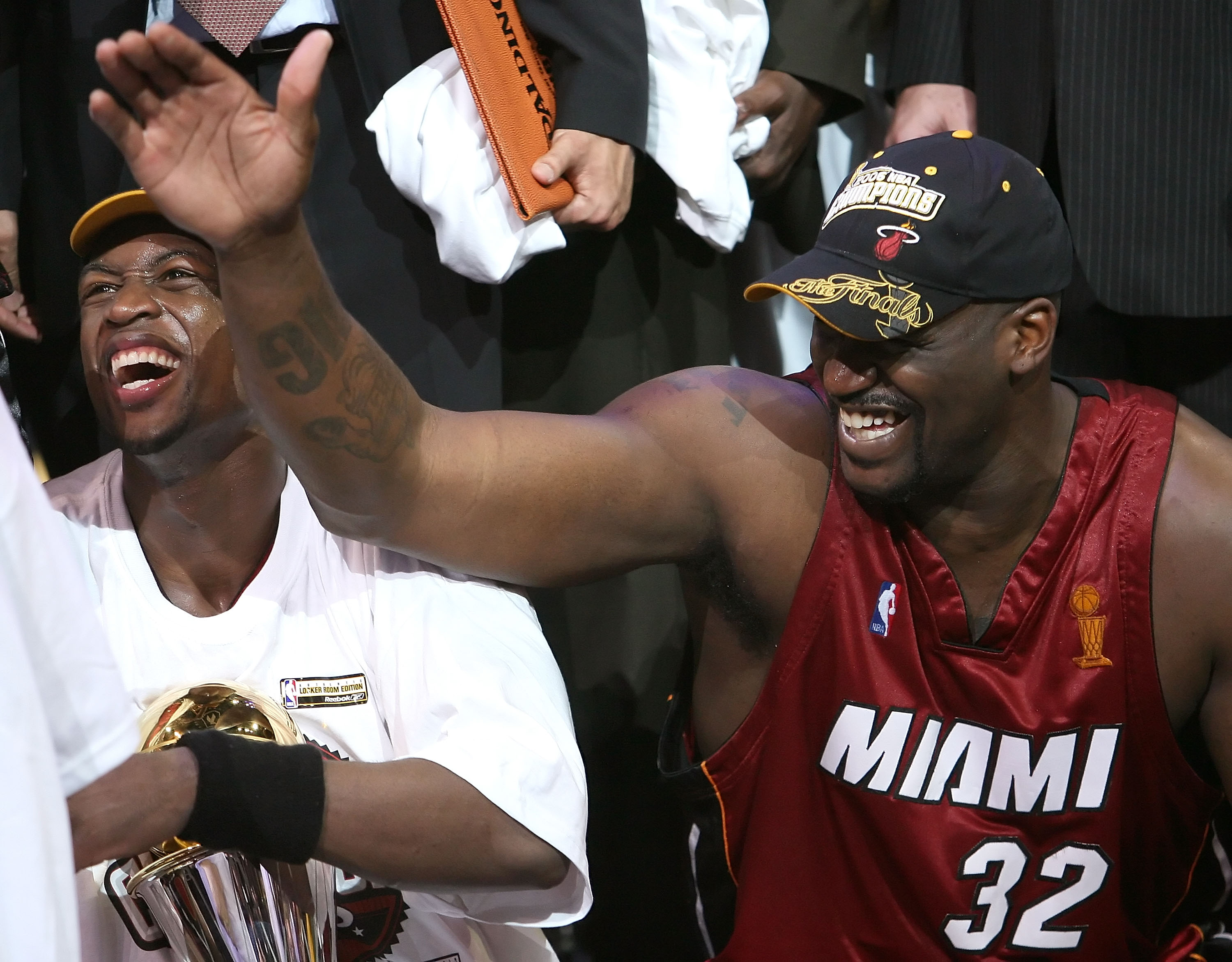 The critics will continue to harp on what the Heat don't have. They will point to the lack of depth, "weakness" at the point guard and center positions, and lord knows what else.

But what they do have is a unique set of superstar players—all in their prime nonetheless—with one goal.

Riley assembled this squad not to just sell tickets, entertain and get the league back to its golden age. This team was put together to win multiple championships.

Through hard work and a little bit of luck, they can bring Miami its second NBA Championship in six years.

Nobody is going to give it to them. They must seize the moment.

Check out MIASPORTSGUY.COM for more Miami Heat coverage and all Miami sports for that matter!