Los Angeles Lakers:10 Reasons Why Lamar Odom Is the X-Factor in Team's Success 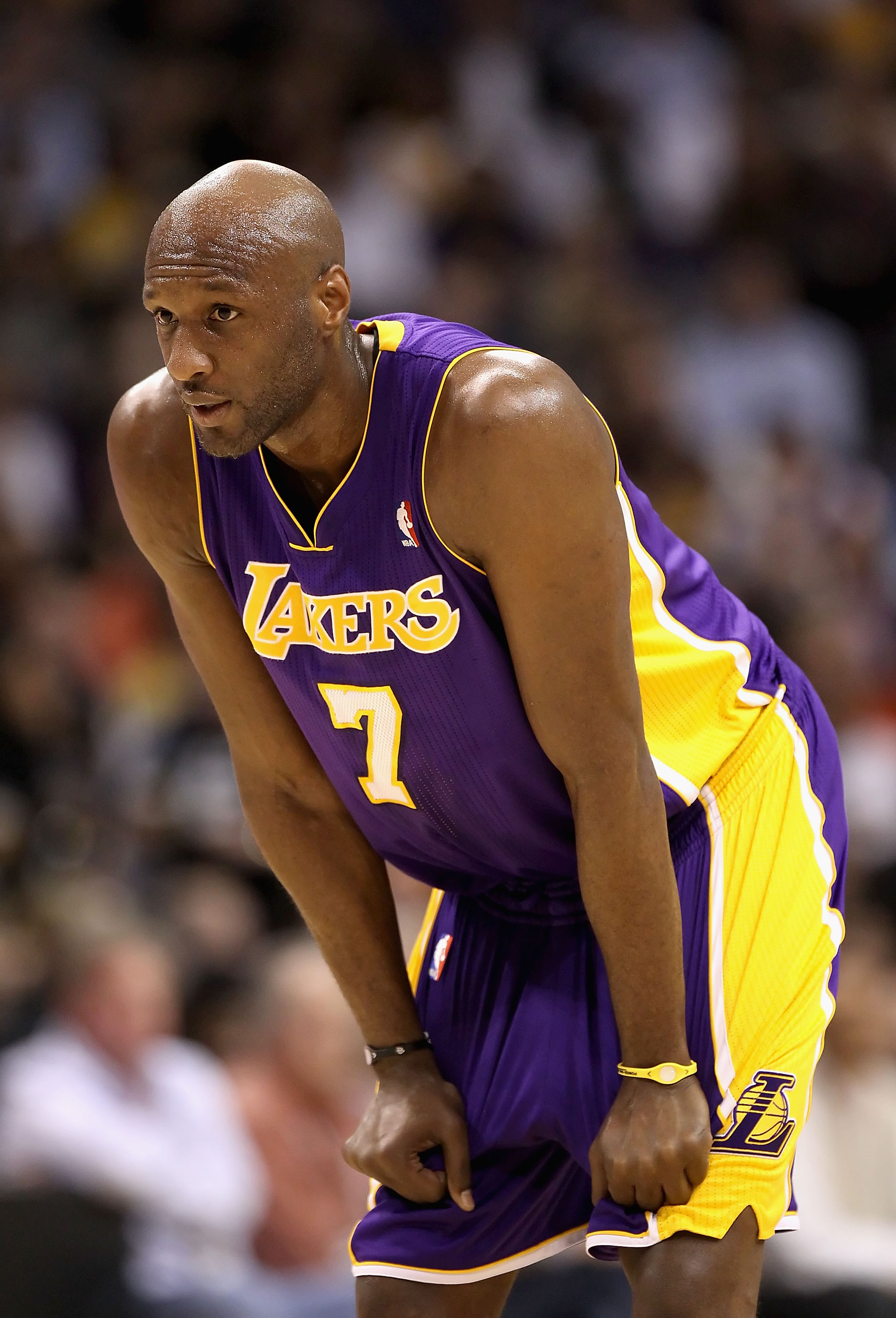 With Odom, the Lakers have a reason to look up.Christian Petersen/Getty Images

The Lakers’ roster is filled with personalities such as Kobe Bryant, Pau Gasol, Ron Artest, Derek Fisher. Even Andrew Bynum name is mentioned before Lamar Odom’s, and Bynum has missed most of the past three seasons.

Nonetheless, Lamar Odom has been considered the Lakers x-factor over the past few seasons because when he has played well, the Lakers were near impossible to beat. The trend has continued this season, and now more than ever, Lamar Odom is the Lakers’ x-factor.

Pundits and analyst have considered this year to be Lamar’s best season since he entered the NBA. It is debatable whether we should attribute Lamar’s success to his time spent with Team USA or his marriage to Kloe Kardashian. Yet, it is undeniable that he is the Lakers’ X-factor.

However, I must mention Lamar participated in the 2004 Summer Olympics with Team USA, so it must be Khloe. With that being said, here are ten reasons why Lamar Odom is the Lakers’ X-Factor. 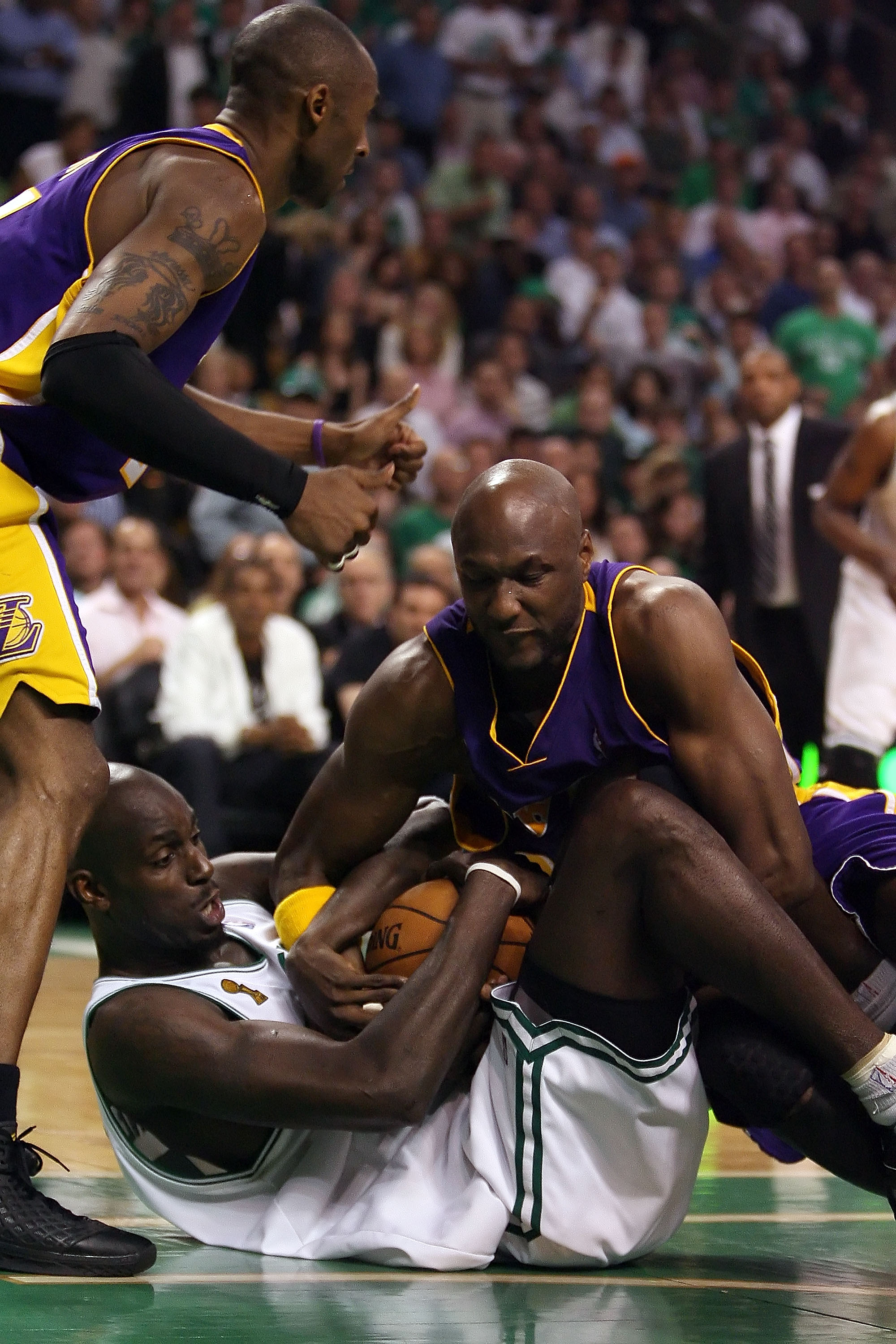 Lamar may not be known as a bad boy like his childhood friend and teammate Ron Artest, but Lamar is willing to mix it up with anyone in the league. Most recently, Lamar and Blake Griffin got into a shoving match late the game as frustration amounted in what ended in a Laker defeat.

In addition, Lamar, not Artest, is normally the first one to aid a teammate during a confrontation.

Lamar is also the only Laker big that is consistently also willing to do dirty work such a diving on the ground or flying out of bounds for loose balls.

Lamar's attitude and effort has permeated throughout the team, especially with the Lakers' second unit. 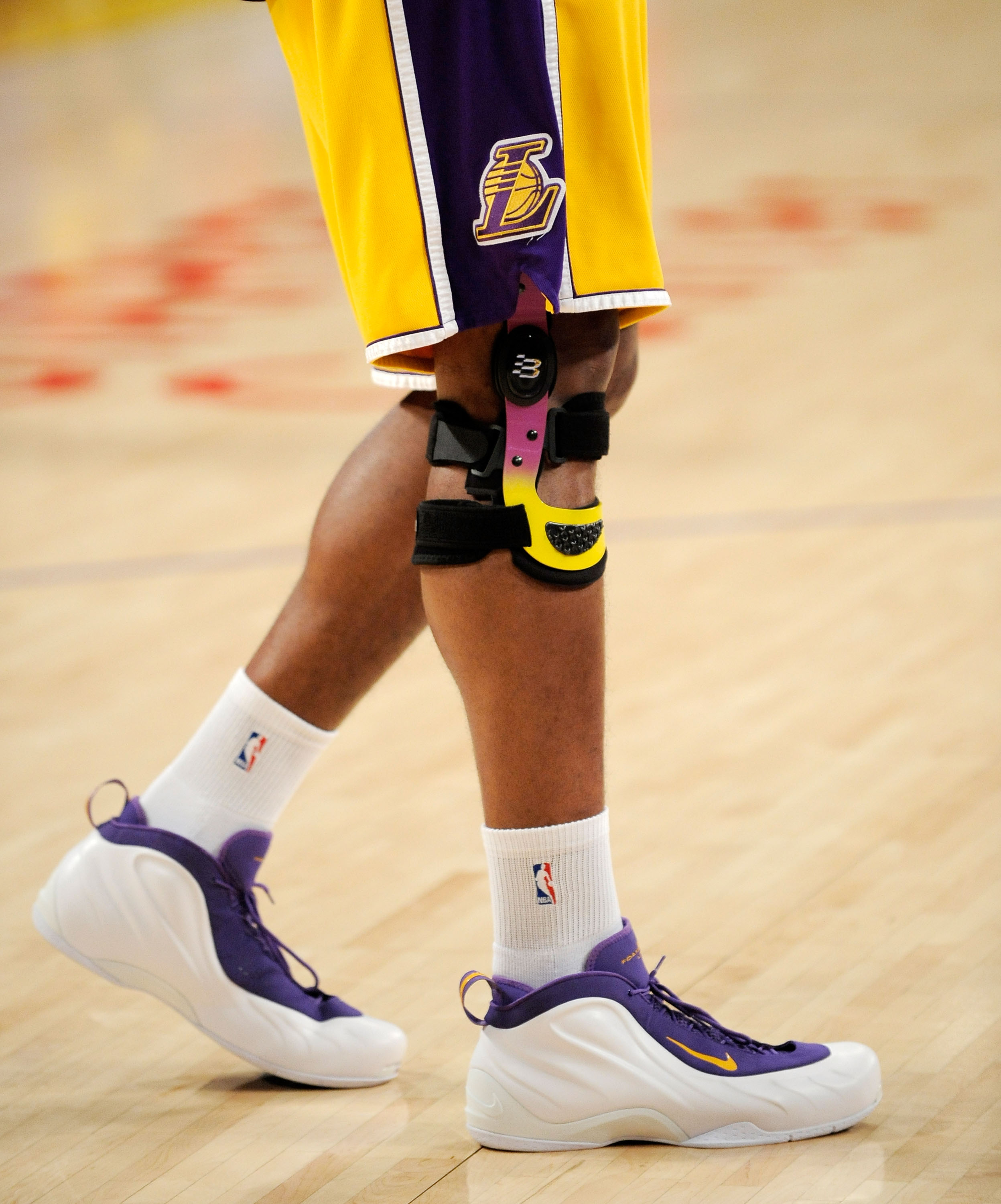 As I mentioned in the introduction, Bynum has not been a pillar of health over the past few seasons. As a consequence of Bynum's health, the Lakers have called upon Odom step in the starting line-up and produce. Lamar has answered the Lakers' call time and time again.

Lamar Odom was instrumental in the Lakers' last three appearances in the finals as Bynum's playoff contributions were limited in each of those post-season runs. If Bynum's string of bad luck continues, Lamar's contributions will again help the Lakers adjust without missing a beat. 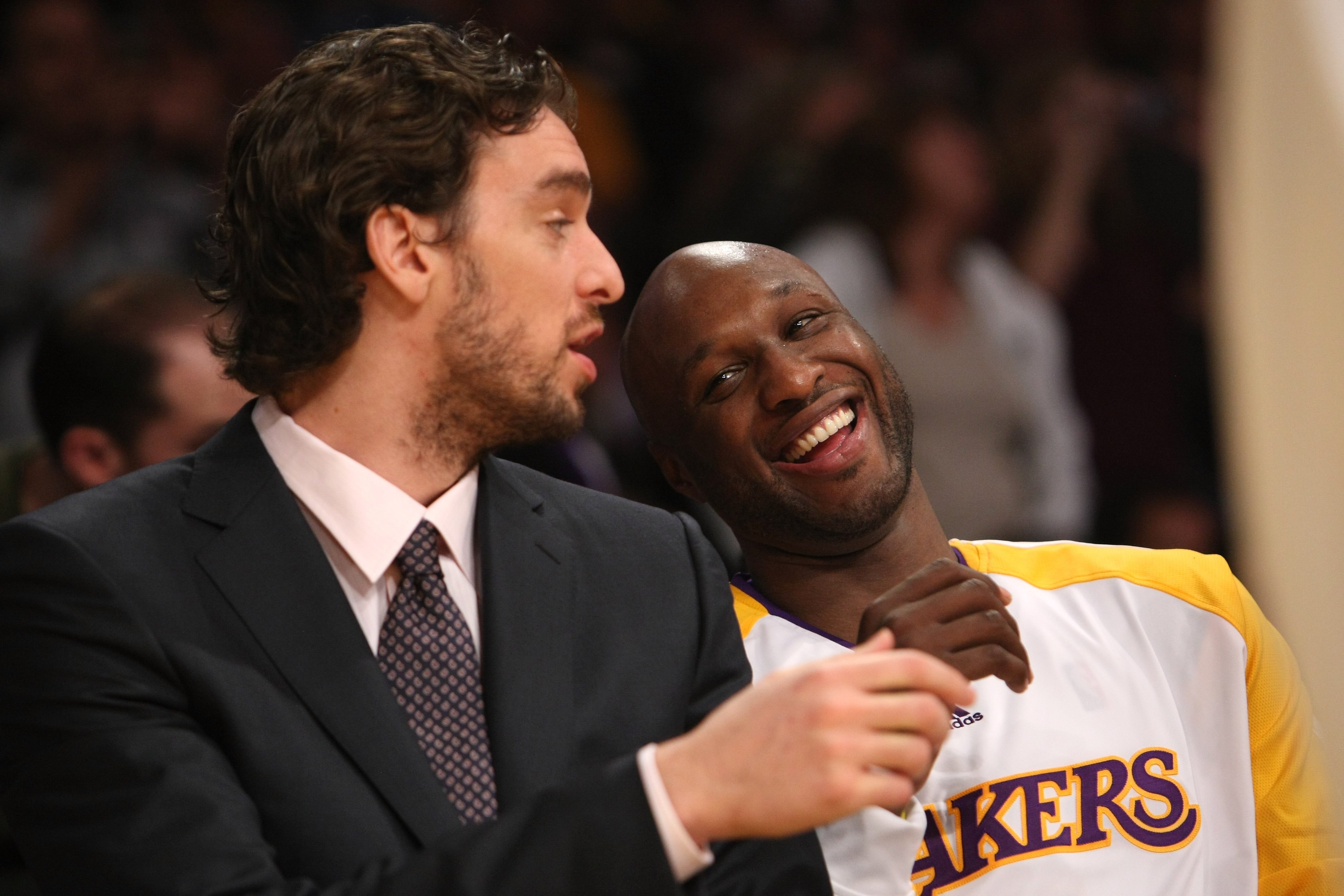 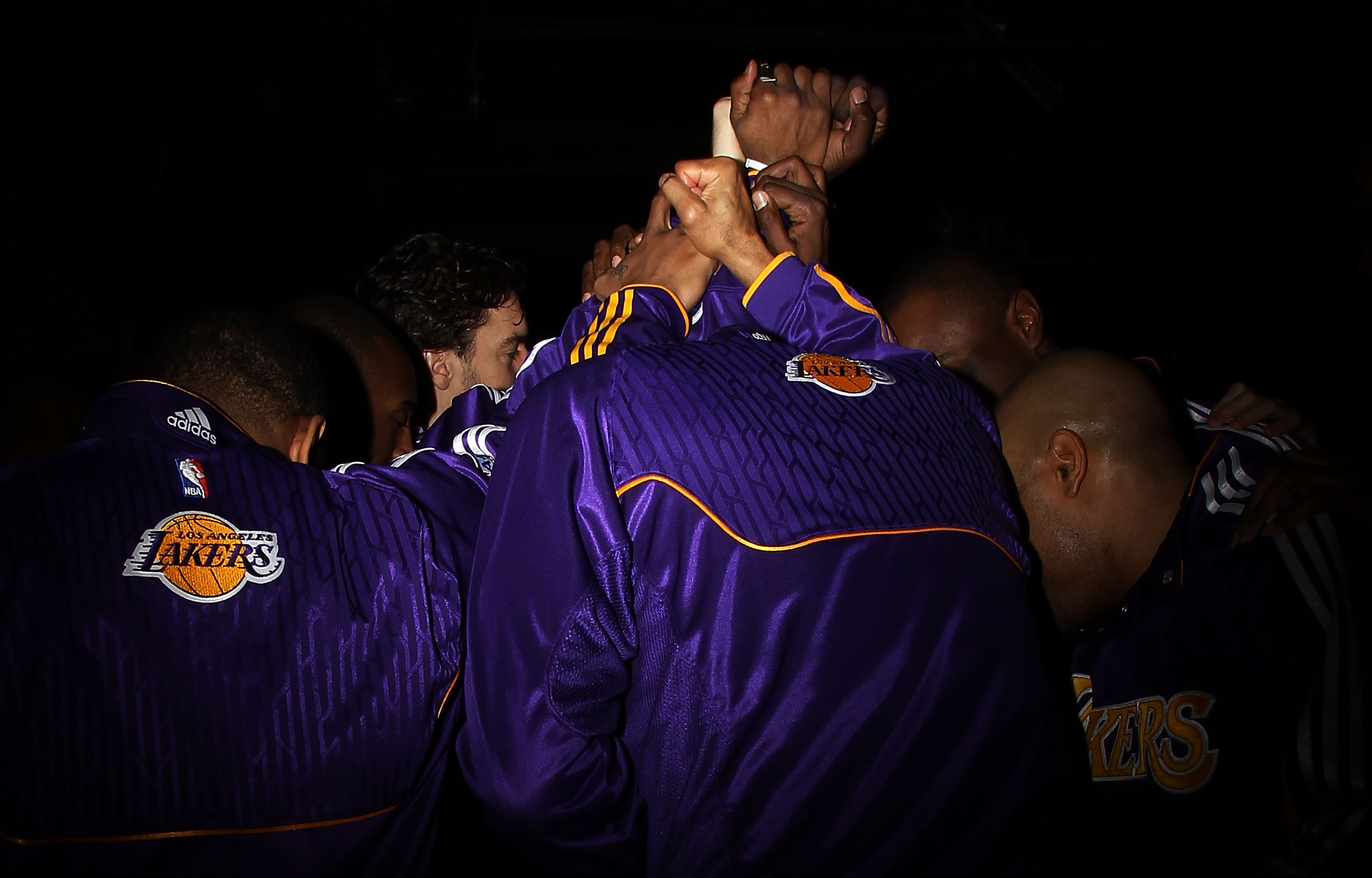 How many teams have the luxury of bringing a consistent double-double threat off of the bench? There are not that many quality big men in the league altogether and the Lakers have three of them.

The previous two slides may have painted Lamar Odom just as an insurance policy in case of an injury. However, he is much more and when the Lakers are at full strength, opposing teams have conjure up a game-plan to defend all three all-star caliber big men.

The Lamar is the leader of the Lakers' second unit and makes them formidable squad when Kobe is on the bench.

And because Odom is naturally a starter, the Lakers are capable of playing  a combination of Bynum/Gasol, Gasol/Odom, or Bynum/Odom at all times. Therefore, when Bynum or Gasol are in need of a breather, there is not any drop off in talent or production. This puts opposing teams at a disadvantage because they often have to play one or two of their starters more minutes than usual to deal with the Lakers' big men. 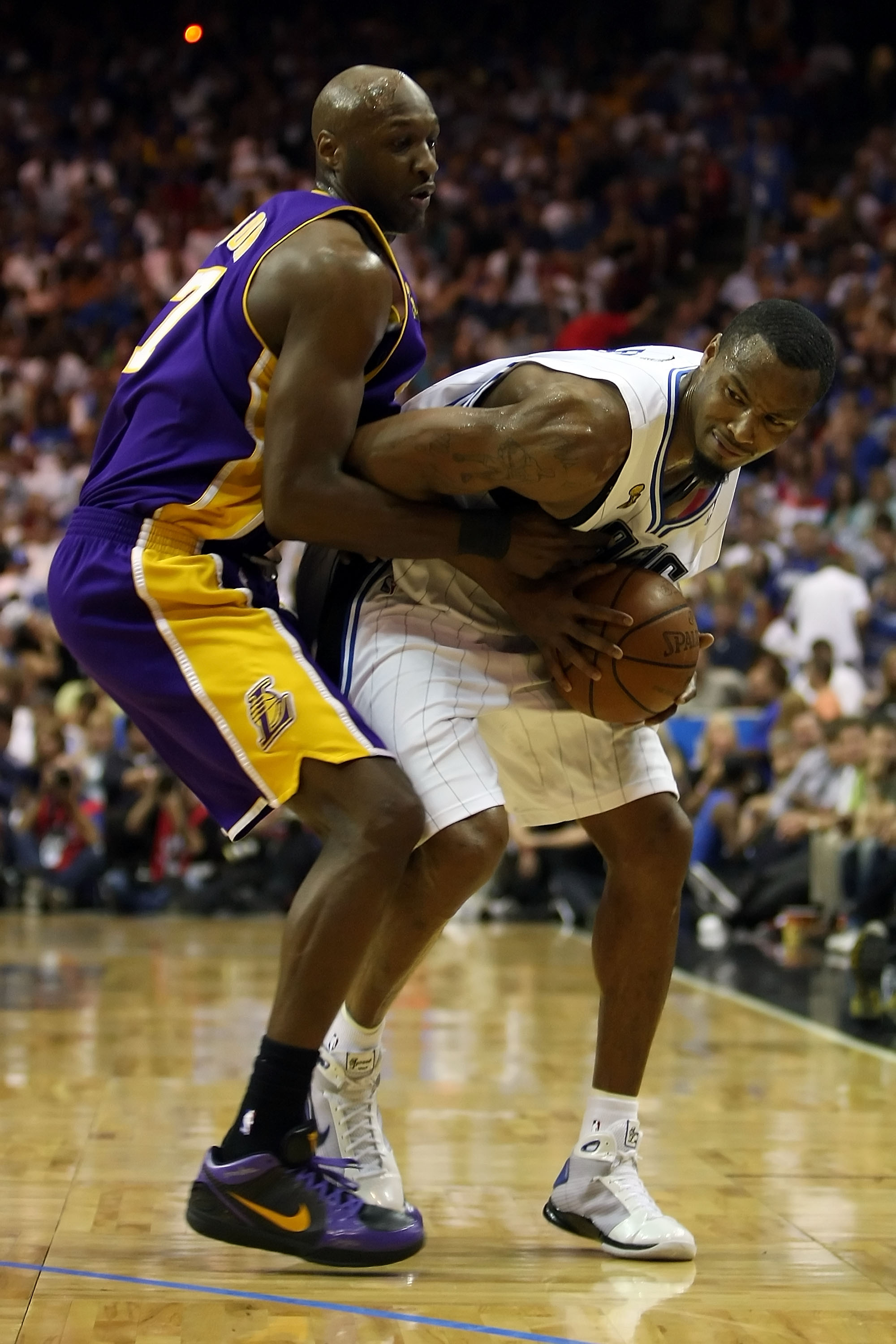 Lamar is effectively able to defend on the perimeter and in the post. In addition defending his own position, Lamar can also defend many centers and most small forwards. In the past few post seasons, Lamar has battled with power forwards such as Kevin Garnett and Carlos Boozer in post, and defended perimeter oriented power forwards such as Rashard Lewis and Amar'e Stoudemire.

Lamar's versatility allows the Lakers to match up with half-court oriented teams such as the Celtics and run and gun team such as the Suns and Warriors without deviating from their normal rotations.

Lamar's versatility was crucial in the 2009 finals as Lamar was designated as the help defender on Dwight Howard and was able recover and defend Rashard Lewis on the perimeter. The Cleveland Cavaliers struggled defending both Howard and Lewis because they lacked a versatile forward like Lamar Odom. This caused them to trade for Antwan Jamison the following season, and we know what happened next. 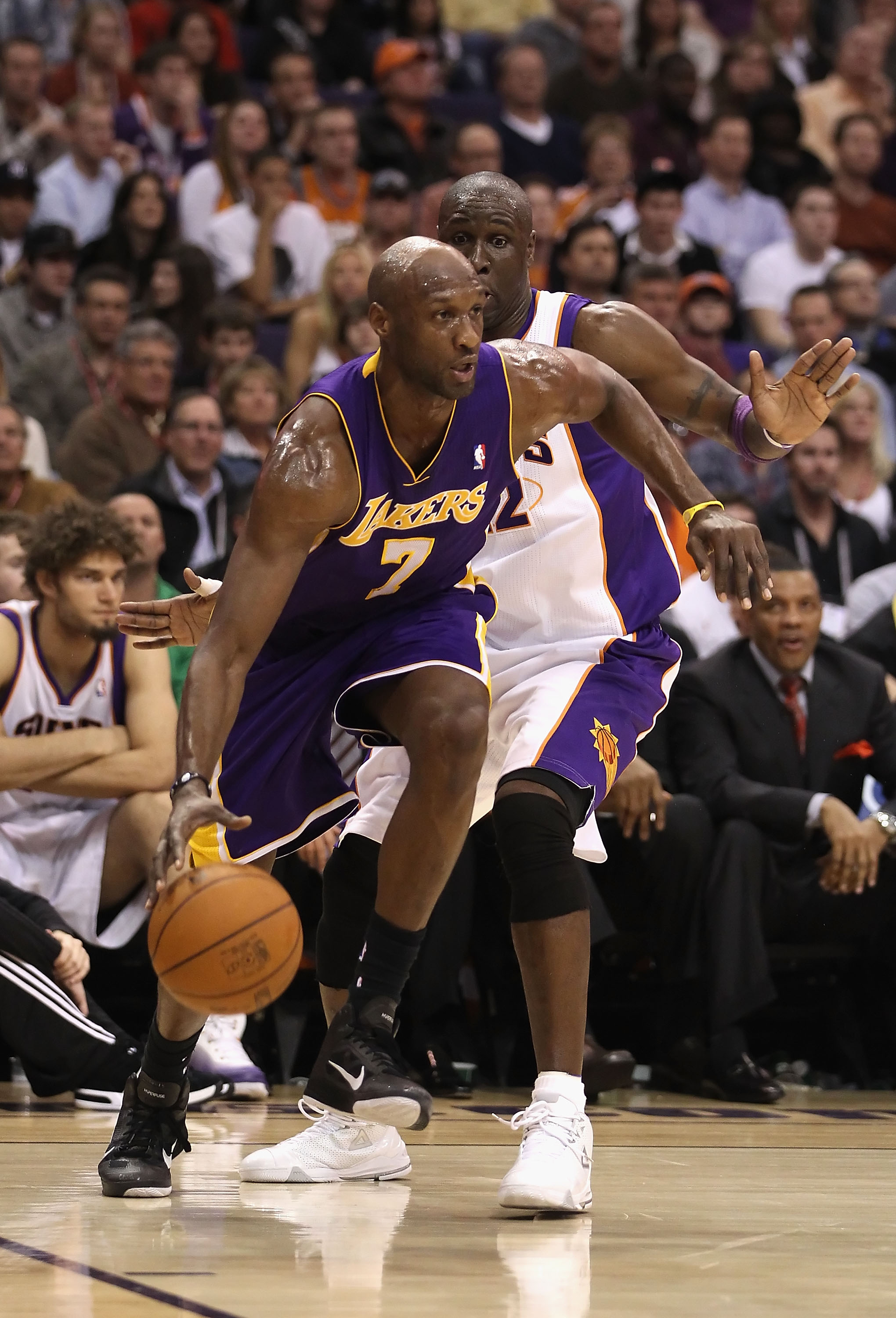 The importance of Odom's versatility on the offensive end cannot be measured, only explained. And I will try to do so.

Lamar is the perfect player for the triangle offense. The triangle offense requires multiple play-makers, players that can play both in the post and on the perimeter, and on and off the ball . Lamar's range extends to the three-point line, he can post-up, and is a great slasher when players leave him to double Gasol or Bynum.

Lamar is even more dangerous when he has the ball in his hands. Lamar can beat slower power forwards off the dribble when they pressure him. Then when defenders force him to take jump shots, he drain long range shots.

He is also a great play-maker and has averaged at least four assist in six of his twelve seasons in the NBA. His ability to create easy shots for his teammates alleviates the pressure off Kobe to make plays  and take tough shots when the triangle offense breaks down.

Lamar Odom is one of the few power fowards ever able to grab a rebound and lead his own one man fastbreak and finish with a dunk or lay-up. The other power forward that comes to mind is Charles Barkely (with 76ers).

Odom is one of the best rebounders in the league and his ball handling rivals some of the best guards in the game. Such unique skills allow him to make plays like the one shown above. Plays like this can change the momentum of a game and can demoralize teams. This ability truly deserves a slide of its own. 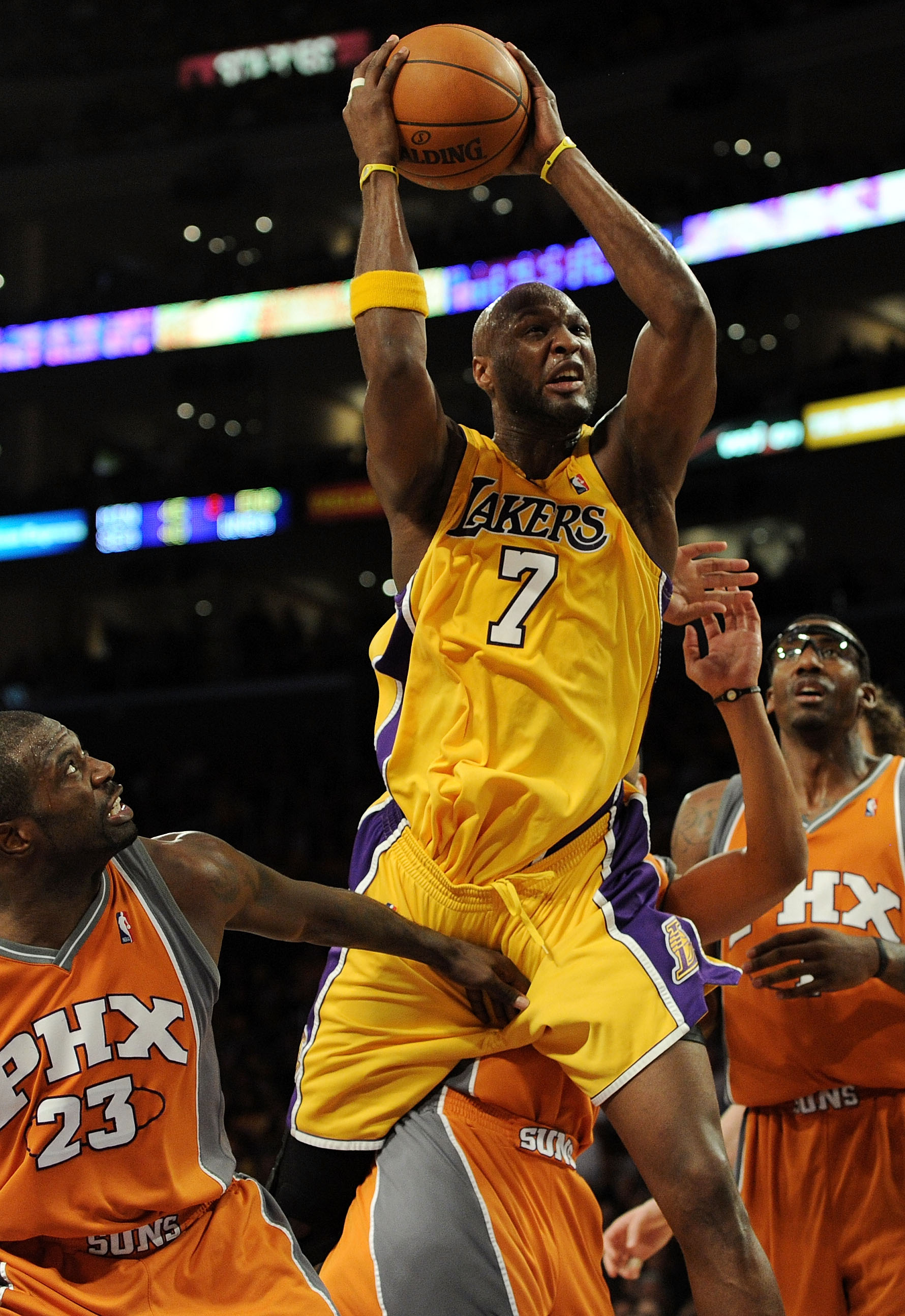 Despite Lamar's reputation of being inconsistent, rebounding has been the most consistent aspect of Lamar's game since joining the Lakers. 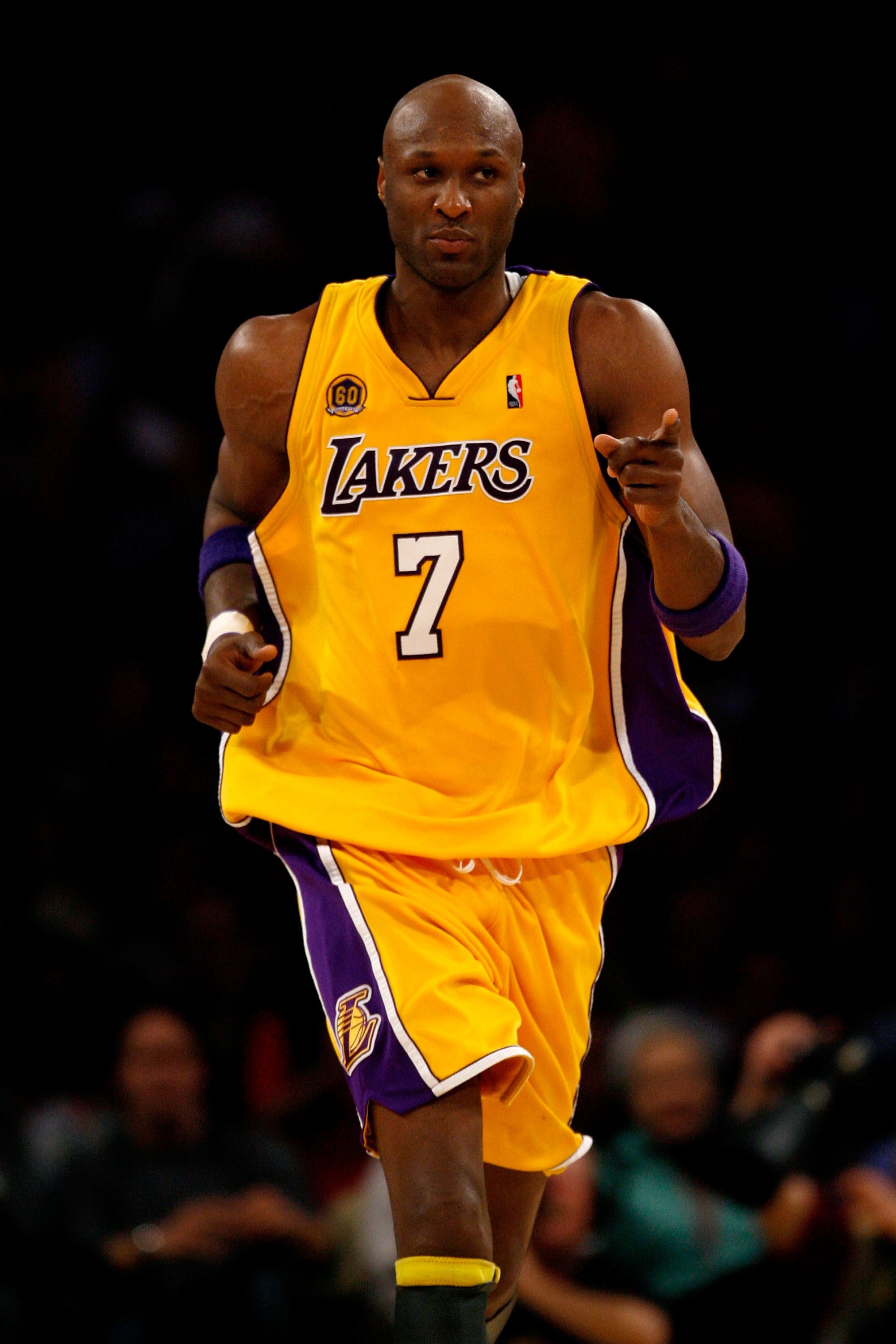 Lamar does not care if he starts or if he is the first man off of the bench. He does not mind carrying the scoring load on any given night and will not complain if he only takes three shots in a game.

If Kobe has it going, Lamar will defer. If Gasol has a favorable match-up, Lamar will spread the floor and be a willing slasher. Lamar  embodies a team first mentality.

Lamar could disrupt the teams' chemistry if he complained about not being a starter or not being a focal point of the offense. But he does not. For that reason, the Lakers are able to play together and unselfishly. Teams without great on court chemistry just do not win championships.

Some might point out that Kobe and Shaq worked for three championships. They just may be the exception, but remember how that ended.

The Lakers now have great chemistry due in large part to Lamar Odom. When Lamar Odom had the chance to leave the Lakers as free-agent in 2009, he took less money to stay with the Lakers. Lamar is glue that holds the Lakers together. 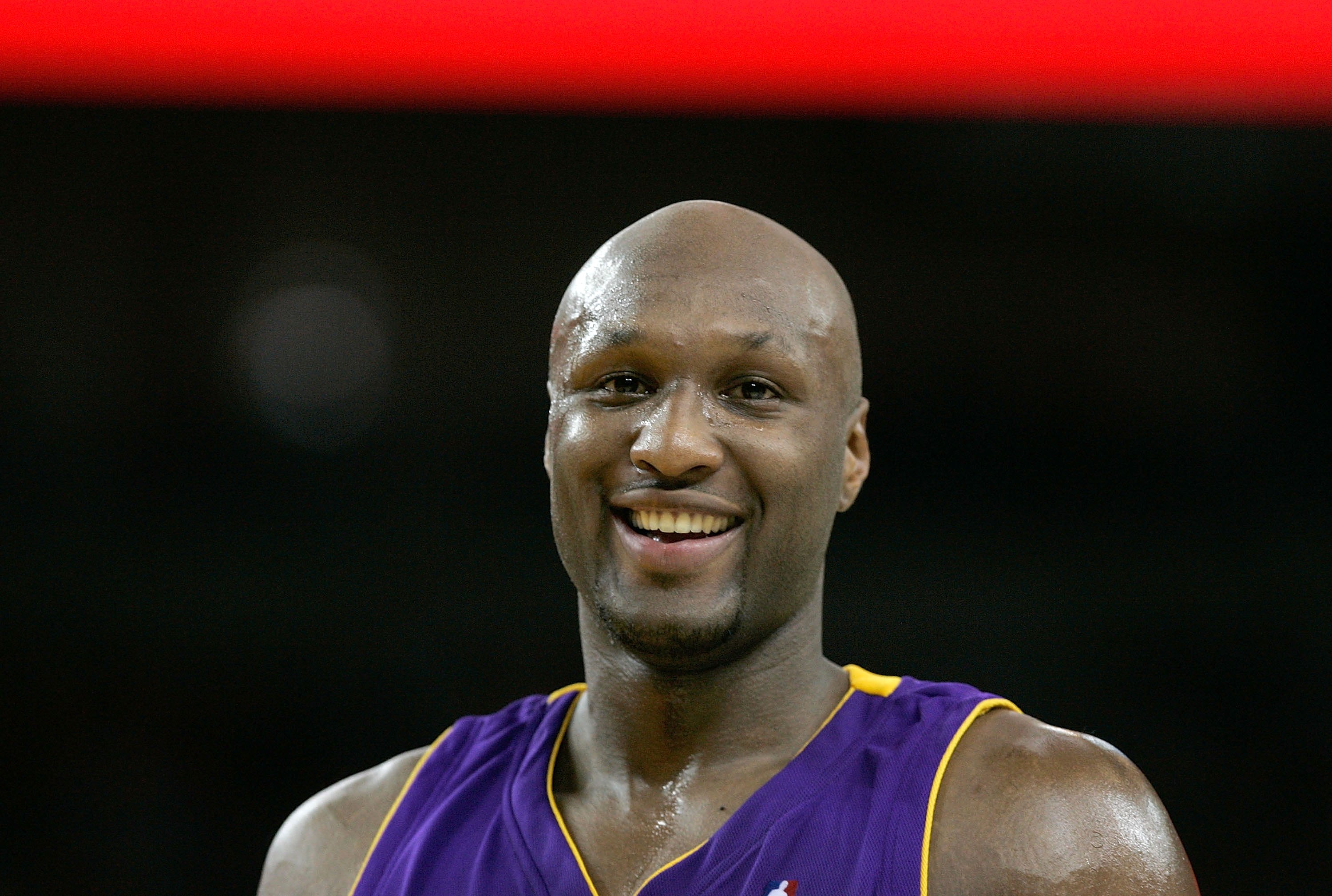 Lamar has plenty of reasons to smile this season.Jed Jacobsohn/Getty Images

I have alluded to his reputation of being inconsistent, but that has changed this season. Inconsistency used to be synonomous with Lamar Odom. Opposing teams, coaches, and fans have always praised Lamar’s abilities on the court. However, no one could ever seem to explain Lamar’s inconsistency.

This season he has arguably been the Lakers most consistent player.

Bynum missed the first two months of the season, Kobe was injured to start the season, Pau started showing signs of fatigue, and Ron Artest has looked confused for most of the season. Then there was Odom grabbing ten rebounds a game, scoring almost sixteen points and shooting a career best 57% from the field.

Odom's stellar play has kept the Lakers afloat while they were not at full strength and his play has not declined with the return of Bynum to the starting line-up. If Odom continues to be consistent, it will be very difficult for any team to beat the Lakers in the playoffs.

Lamar's consistent play this season has made him the Lakers' X-Factor more so now than ever in the past.