Celebrating Wrestling: 10 Of The Greatest Divas Matches Of The WWE 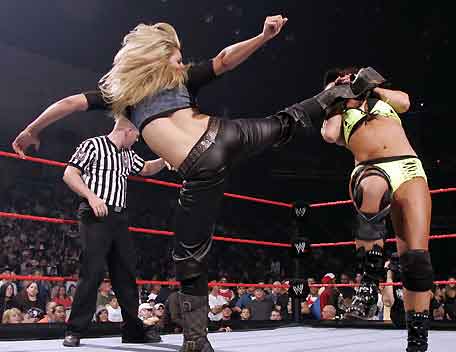 Basically, the idea of a Diva is that she is beautiful enough to make you want to watch them on TV yet they can still kick your ass. The very first Diva in history is Sunny who was a wrestling manager but unlike Ms. Elizabeth or Sensational Sherri, Sunny was more sexual. A head turner, if you will. She's just so damn hot and sexy, you can't get enough.

The idea exploded and soon we got Sable, Marlene and Debra gracing the wrestling rings in their lingerie. We were treated to bikini contests, bra and panties matches and evening gown matches. Eventually we even got Mae Young to show her breast on TV at one point.

Within the sexual induced dream WWE gave us, we were also treated to some damn fine diva matches that proved to the world that girls can play on the boy's sandbox. There was Chyna who was throwing Jeff Jarrett and Val Venis around and even Stephanie Mcmahon got into the action.

Yes, gone are the days when divas matter. Nowadays, divas are mere match fillers and I am sure a lot of people turn the channel when Alicia Fox and Eve would wrestle. We were treated to eye candies who are really green and inexperienced. Jackie Gayda!

And after the long luxurious history of the WWE Divas, it all ended with Vickie Guerrero giving Kelly Kelly a frog splash. I'm just part of that generation who loves wrestling in general. Divas aren't what they used to be but as a true fan, I still watch it.

The following slides are, what I consider, ten of the most impressive divas match in WWE. These matches aren't your typical albino dalmatian match (the spots are missing). These matches are superb and it really blurs the line between a diva and a regular male wrestling match.

Alundra Blayze is the uncredited greatest women's champion in wrestling history. A lot of people only associate Blayze with the dumping of the women's title in a trash can back at WCW which undoubtedly ruined her career.

Alundra Blayze can wrestle and if you ever enjoyed a solid Daniel Bryan match, then you can enjoy how Blayze work in the ring. A hard hitting wrestler who can sell bumps is really rare these days and Blayze does it so perfectly.

In this match, Blayze takes on Bull Nakano who was (and still) a bad ass in the ring. A true brawler in very sense of the word. She really brings the best out of Blayze in this match and the two ladies have chemistry which is also rare these days.

This also doesn't qualify as a "diva" match because the style of this match is Joshi. Joshi is japanese female wrestling style where you start with high impact moves then lock on a rest hold then go back to high impact moves.

Six divas in a single match. How can you go wrong?

This match is extremely good because, for a wrestling match, chemistry is really important. It's really hard to watch two divas who fumble around and mis-communicate. In this match, everyone is on point.

This match also has Trish Stratus and Lita in it. These two divas really kick ass but there are also some talented divas in it. Jazz is a former ECW talent and she spent a lot of her time in inter-gender matches. Yes, she beat up boys. Molly Holly and Ivory were former power lifters and Jacqueline was as quick as Trish.

It's a rather quick match but it's five minutes of high paced action and a lot of wrestling moves than will make Super Cena blush. (Yes, I'm bashing Cena. Haters to the left.)

A hardcore divas match is unheard of. In fact, when Trish and Victoria fought at a hardcore match a lot of people received it very negatively. It's kinda sad that the match was never given the praise it deserves.

But years later, when Trish and Victoria was no longer in the WWE, a lot of wrestling fans began complaining to how divas today aren't good as Trish or Victoria. I am convinced fans can never be satisfied. You hate a diva hardcore match and you hate Laycool, which is it?

But this match is good, you can trust me on this. After all, its two women hitting each other with trash can lids and broom sticks. Granted that the shots are a few inches off, it is still a sight to see. Ever see Victoria's nose bleed?

Trish Stratus and Victoria really have good chemistry and Victoria was in her crazy jealous gimmick phase that made the build up of the match so much more special.

Beth and Melina I Quit Match

The very first I Quit Divas match of the WWE. Technically, its a submission match but let's not go on technicality. It's the only match in this slide that didn't involve Trish or Lita.It's also a PG era match and this is the era where Alicia Fox and Eve are leading the pack so its very unexpected.

Then again, you have Beth Phoenix who is a powerhouse of a diva. This diva was everything we missed from watching Chyna but with better appeal. On the other hand, you have Melina who can take hits and can sell it very well. Melina is very flexible and it adds more enjoyment in her match.

It's a powerhouse diva against a balanced athlete in a nine minute divas match. It's gonna be good and it is.

The caliber of this tag team match is superb and it really is a tag team match. It's not one of those throw away divas match on RAW where Kelly Kelly would win without even getting a tag. This match is solid full action between four divas who didn't even get props during their tenure on the WWE.

Perhaps it's their lack of personality and charisma that made people want for more but they are wrestlers to begin with. So in this match, watch these four divas do what they do best, wrestle.

I think it's a pretty clear that Wrestlemania 22 is average at best. There was only three notable matches at the biggest stage of them all. Rey Mysterio winning the title against Kurt Angle and Randy Orton which is really expected since it was the highlight of the event. There was also the classic hardcore match put on by Edge and Mick Foley (and a flaming table).

Did you guys see the V kick from Mickie James? Awesome.

May I also mention John Cena main evented this show. So, you know, go divas.

Another Wrestlemania classic. Though it is not that glamorous than the Trish and Mickie James bout but it still delivers in terms of Wrestlemania standard.

It's a solid match with very talented wrestlers.

Ah, Gail Kim. The submission specialist among all the divas. She won the women's title on her debut and it was really something special. This chick can lock you on an armbar and make you tap easily.

A very special match with a technical wrestler, a high flyer, a brawler and a submission specialist. What's not to love? WWE was really smart to put some of the WWE's greatest in a fatal four way match.

Trish and Lita One Last Time

Trish really have some more gas in her tank. She can still put on kick ass matches with the leading divas of today and her retirement at 2006 is a huge sign in the air where the direction of the divas are heading into. To make matter worse, Lita was forced to retire that same year. It's sad.

But it's a proper send off for Trish. She was paired with the only diva who has brought out the best in her and has made every match between them an instant classic. This match is no exception.

Poor Lita who was retired with a hoe sale. WWE proves right then that they didn't care for Lita. They would put Trish on a high shelf and they would let Lita's contribution to the ring waste away. That's unforgivable.

Lita and Victoria In a Steel Cage

Eric Bischoff did good by presenting the RAW Roulette to fans. A big wheel with special matches on it and whatever the wheel decides, the participants will partake in. A special history making event happened when the Lita/Victoria match was set to take place in a steel cage.

The very first ever divas steel cage match. It also came at a good time. Who else deserves to brawl it out in a cage than Lita and Victoria?

To understand just how great this match is, simply listen to the crowd.

These two women is possibly the greatest pair of divas to lock horn in the ring. Their ring style is absolutely on opposite end of a pole. Trish was a versatile wrestler who uses her flexibility to her advantage and her moves a definite crowd-pleaser. Plus she makes Jerry Lawler say "puppies".

Lita, on the other hand, is a student of extreme. High flying moves and little regard foe her safety. She receives a Dudley Death Drop so wonderful that you really enjoy watching her cringe of the mat.

In this match, a humble little match on RAW, Trish and Lita tore the house down. What makes this match epic? One, a botched suicide diva from Lita where she landed on her neck.

Two, a superplex. Seriously, when is that ever done by two divas?

And lastly, the crowd is just going nuts from start to finish. I dare any diva from the current PG to pull off a December 6, 2004 Divas match because I highly regard this the greatest Divas match ever. 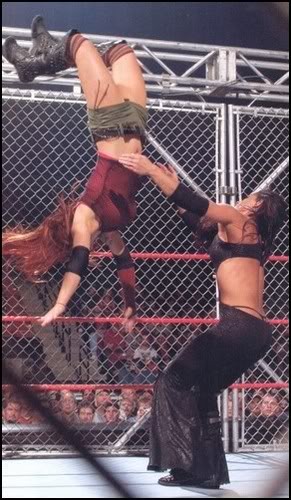 Thank you very much for reading and I hope you enjoyed reading as much as I enjoyed writing it.

I hope you can try my other article published at the same time as this one, "Celebrating Wrestling in Japan: Ten of the greatest women's matches ever" which features legendary women matches that is outside the WWE.

Comments are very much appreciated.