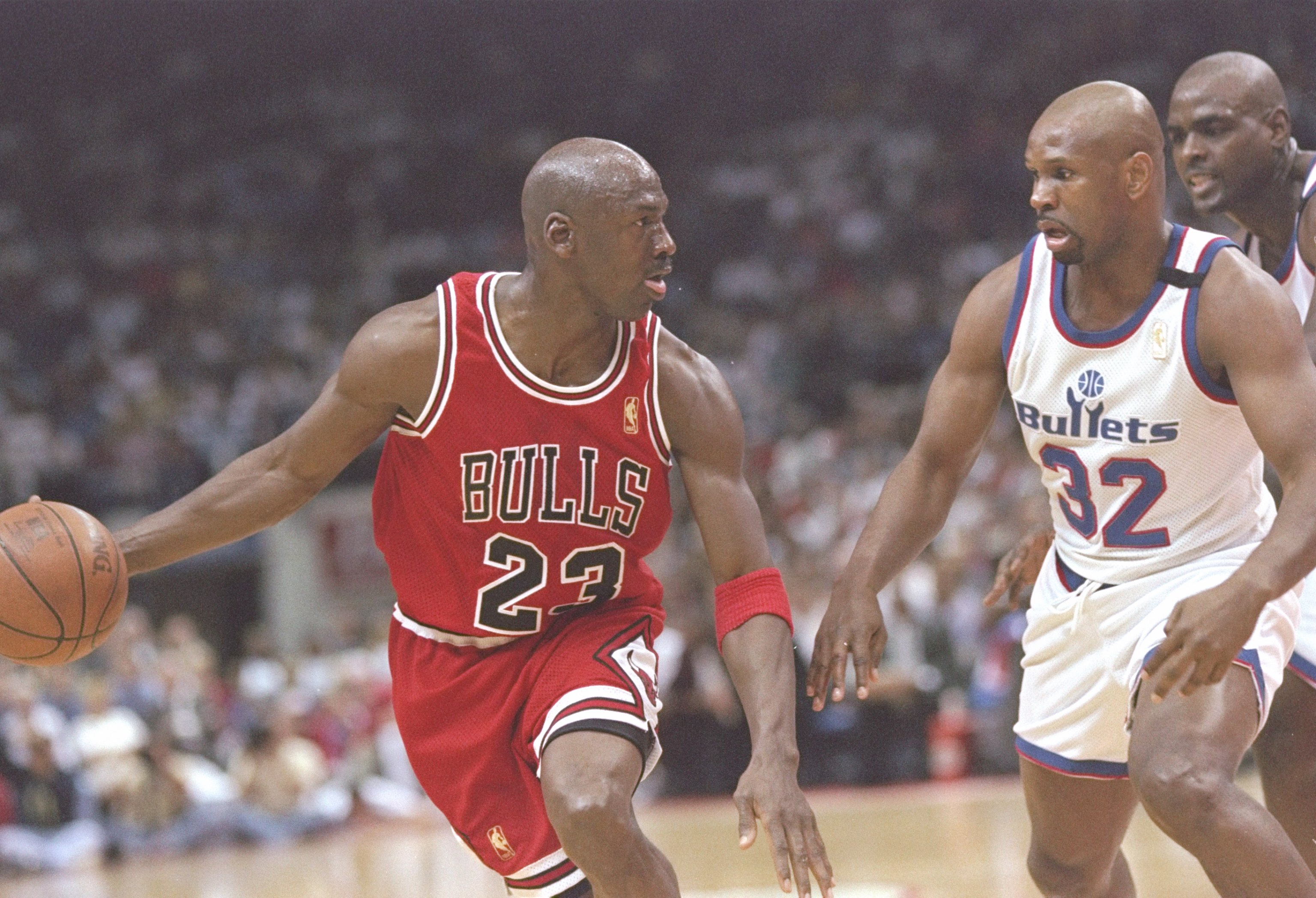 This story goes by points-per-game in each of Jordan's top-10 scoring seasons. I usually go by points per minute to see what the best scoring seasons were for any player, but here, to make it easy, we go with regular season ppg.

Those were the bottom five, here are the top 10: 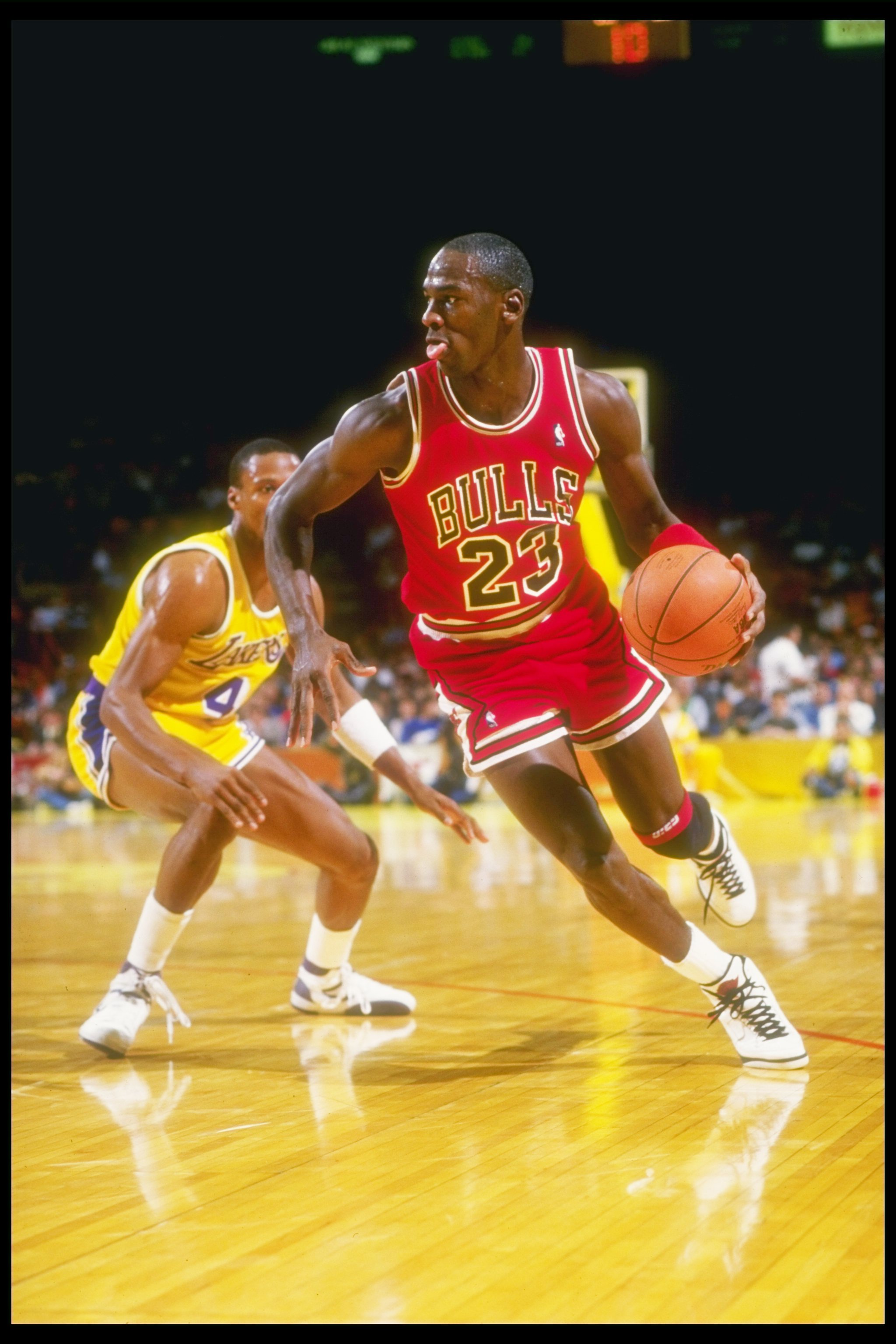 MJ scored more than 3,000 points this season! The only other player to ever do that is Wilt Chamberlain.

In his second season, Jordan scored 63 for an all-time playoff high, which is still a record to this day. So, he started off his third season by scoring in such an exciting way that the world started watching this unstoppable scoring force.

He took it up in so many acrobatic ways it was...well...it's hard to explain.

Jordan led the league in scoring per game for the first time. 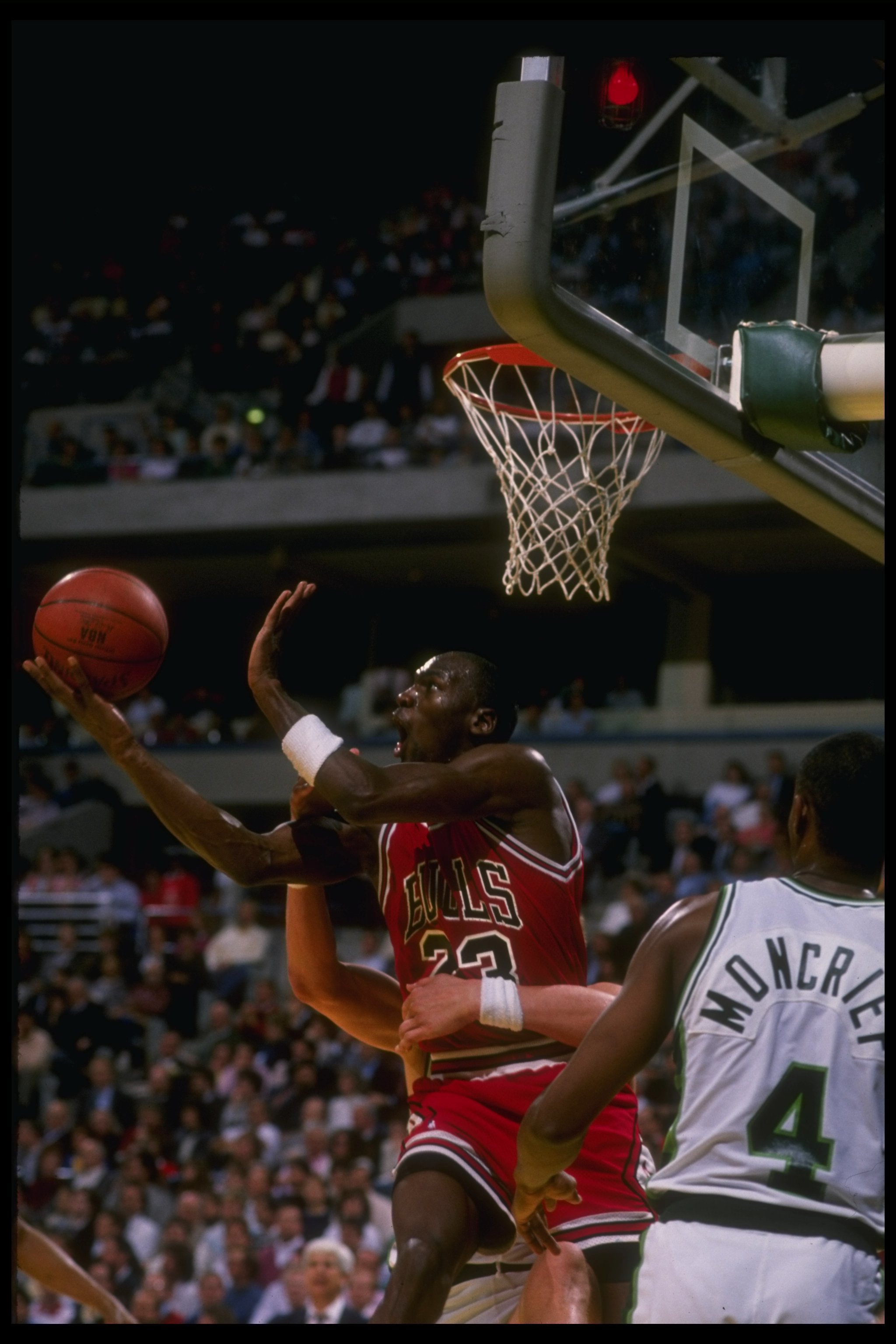 Michael Jordan was named Defensive Player of the Year! The 6'5", 198-pound Jordan stopped anyone from scoring on him, but no one could stop him from scoring.

It is amazing how busy Jordan was on the court in 1988. He was named NBA MVP, All-Star MVP, dunk champion and he led the league in scoring and steals.

Can you say GOAT? 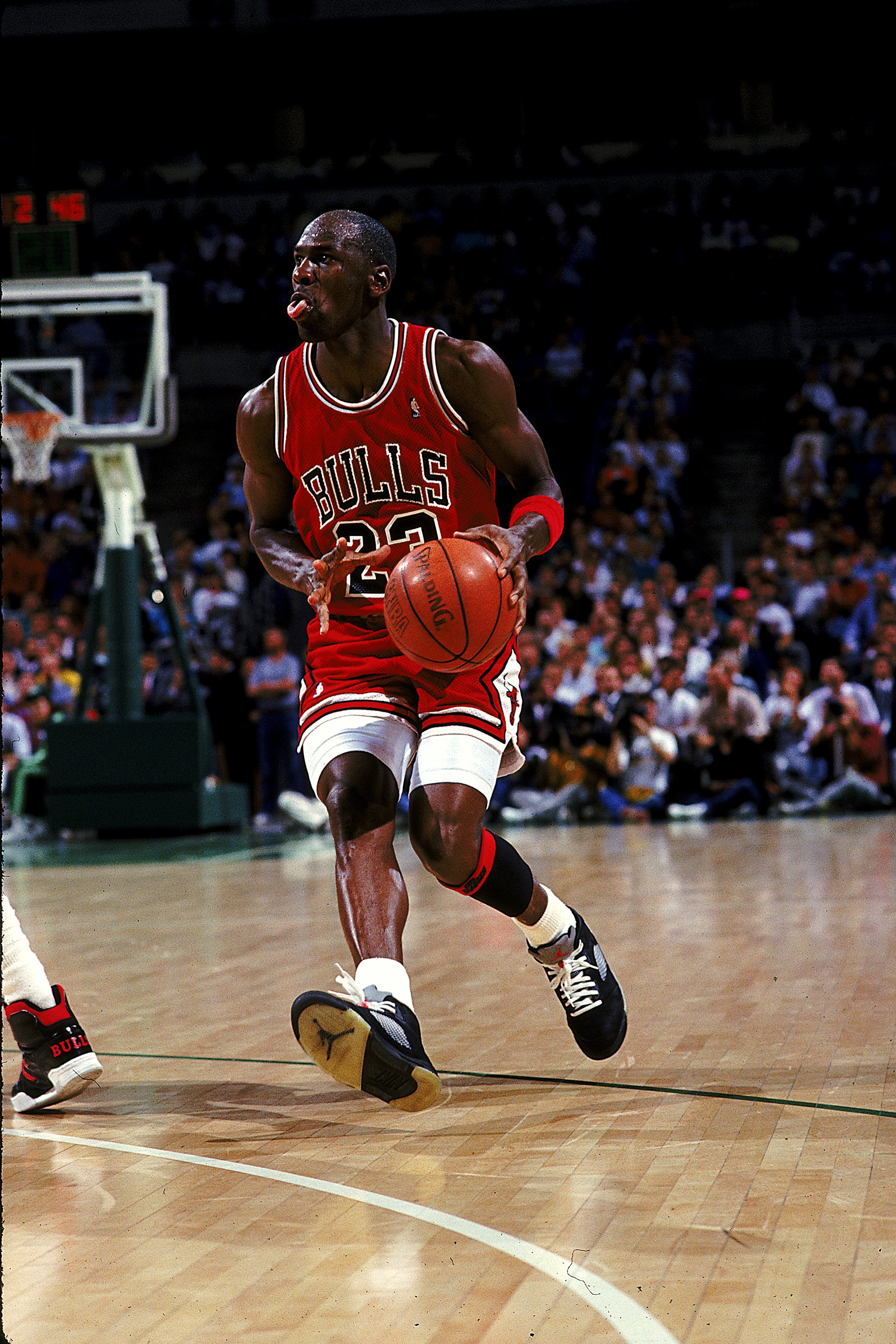 Basically he, could and did, score from anywhere on the court, which was a nightmare for defenders. They could not stop Mike.

Even though his teammates were getting better (Scottie Pippen, Horace Grant) Jordan still had to do more, so he also grabbed an awesome 6.9 rebs, 6.3 assists and 2.8 steals per game.

And those shoes were sick!!! 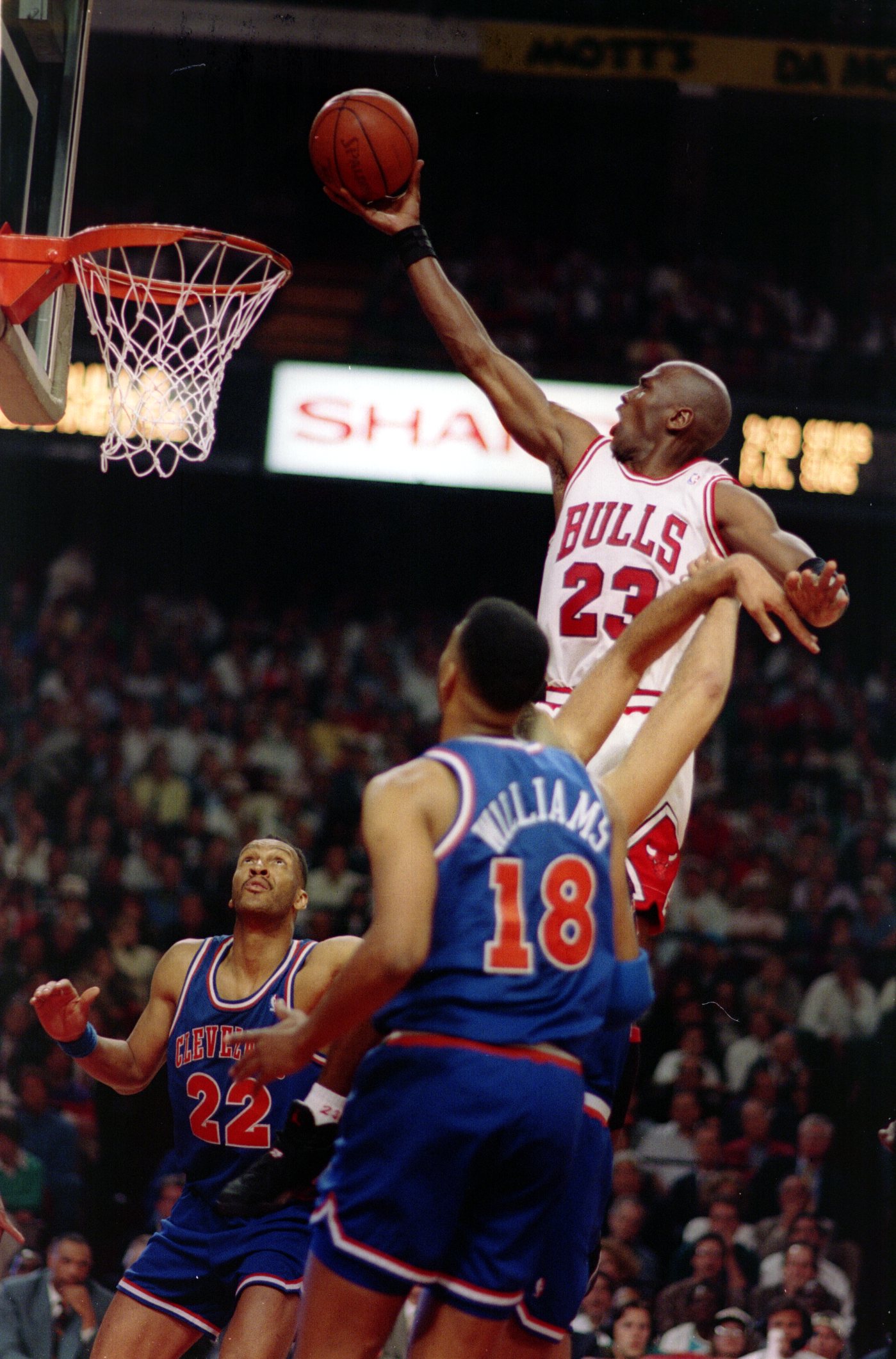 Jordan won his seventh straight scoring title in 1992-93, and he won his third straight NBA championship and then retired at the age of 30. Wow, what a scoring average to retire on.

Jordan shot 50 percent from the field and 83.7 percent from the line and in the finals he scored more points per game than any player ever has. He averaged 41.0 ppg vs. the Suns—he had to—his teammates were sucking it up.

Jordan never took a night off even at age 30.

He also grabbed 6.7 rebounds a game, dished off for 5.5 assists per night and stole 2.8 balls a game.

After nine seasons in the NBA, Jordan was already the greatest to ever play the game. 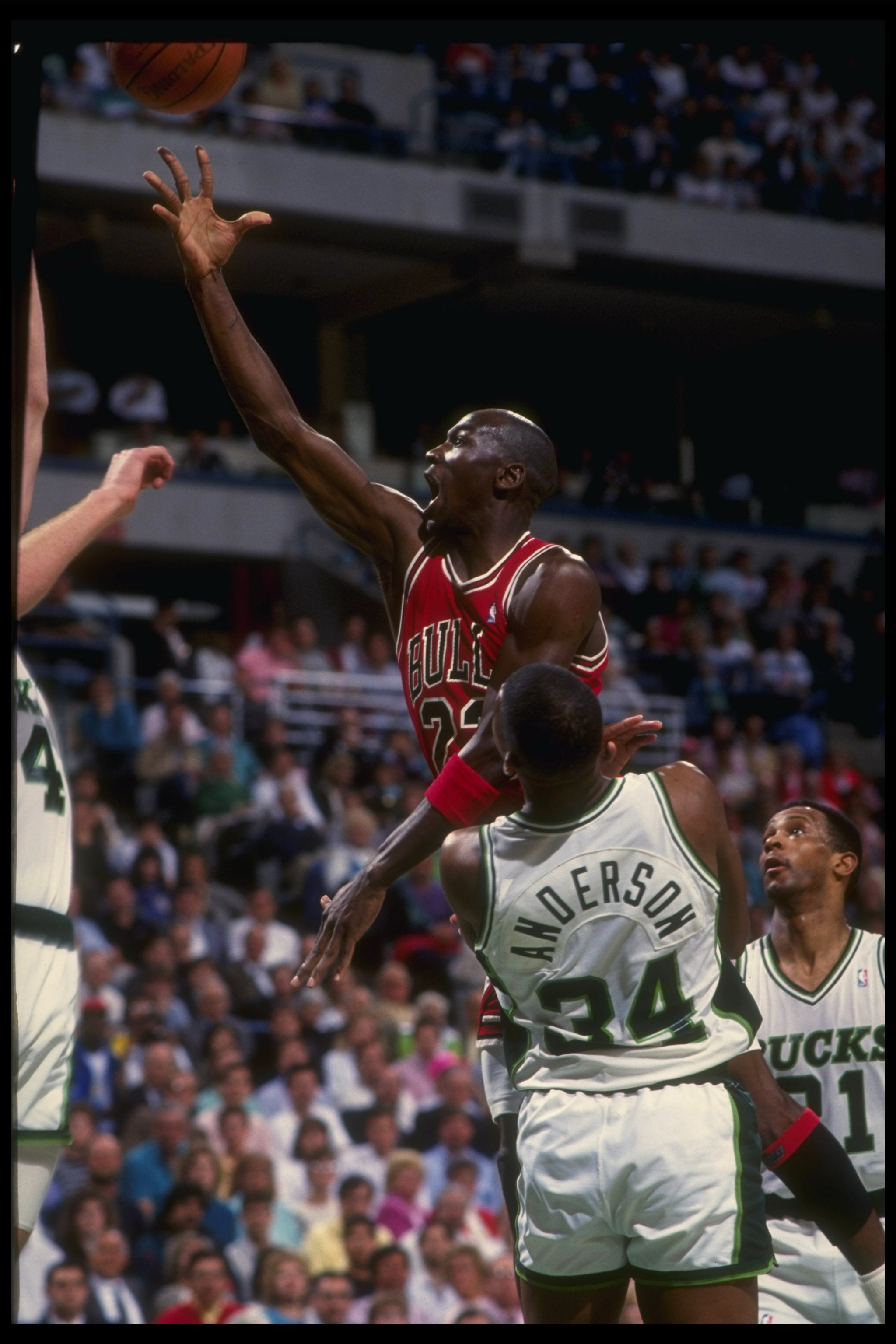 This was Jordan's most all-around season, and he almost averaged a triple-double.

You hear about LeBron James averaging 28 points and grabbing seven rebounds and dishing eight assists, but Jordan, at 6'5", 200 pounds, scored 32.5 ppg on an awesome 53.8 percent from the field and 85 percent from the line.

MJ also grabbed eight rebounds per game (a shooting guard!) and dished off eight assists per game, and he was like a bulldog on the defensive end with 2.9 steals per game.

In one stretch Jordan recorded 11 straight games with over 10 assists. His teammates needed all the help they could get. 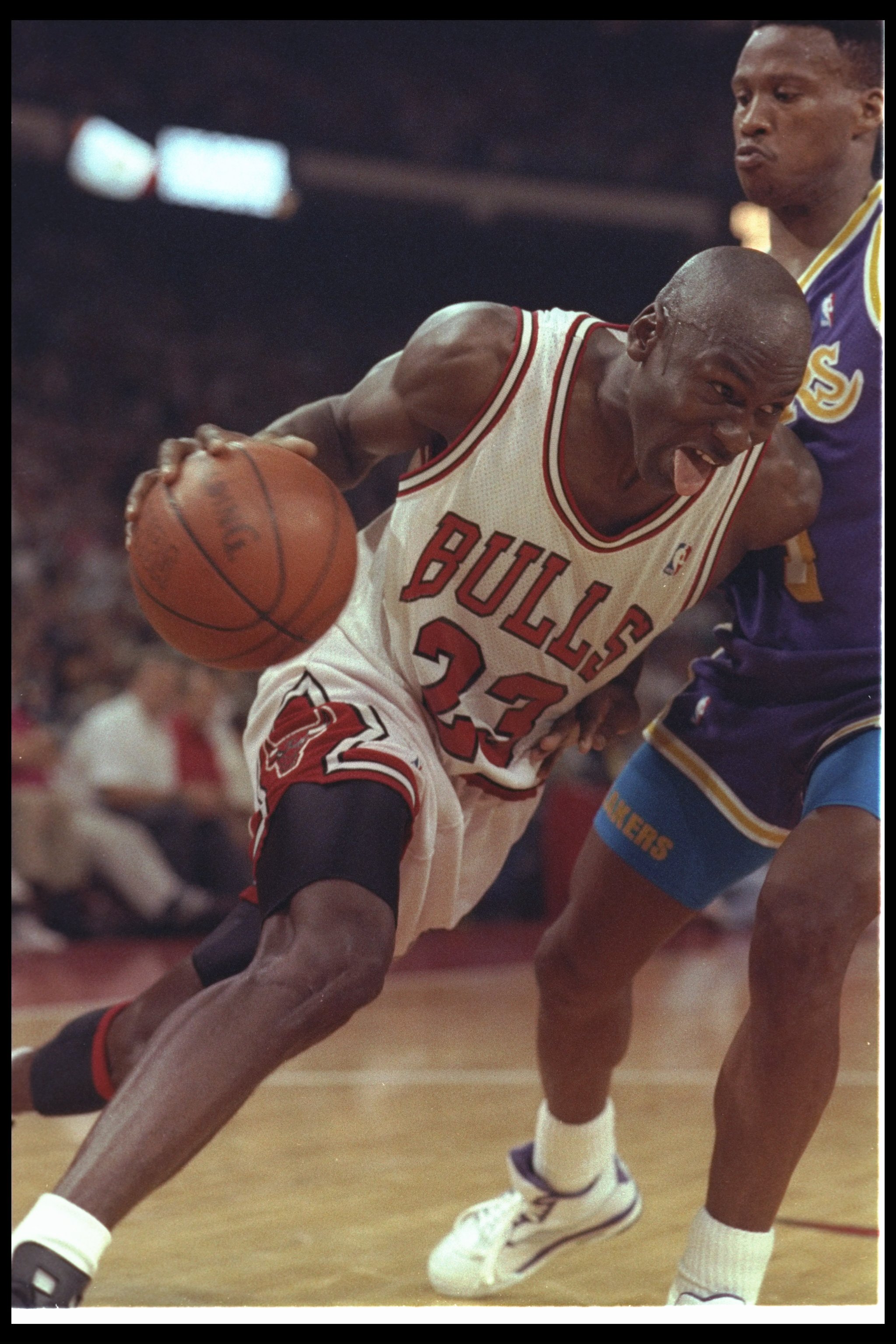 Jordan forced his first Finals win, and did it in mind-blowing style. He was infallible in the Finals by averaging more than 30 points and 10 assists per game. He would not lose and had no mercy on Magic Johnson, James Worthy or Byron Scott.

In the regular season, MJ was totally unstoppable as he primed his team of underachievers to be the best. In 1991, Jordan solidified his legacy as greatest ever. Jordan shot 53.9 percent from the field!!! In comparison, Kobe Bryant's career high field goal percentage is 46.9 percent. 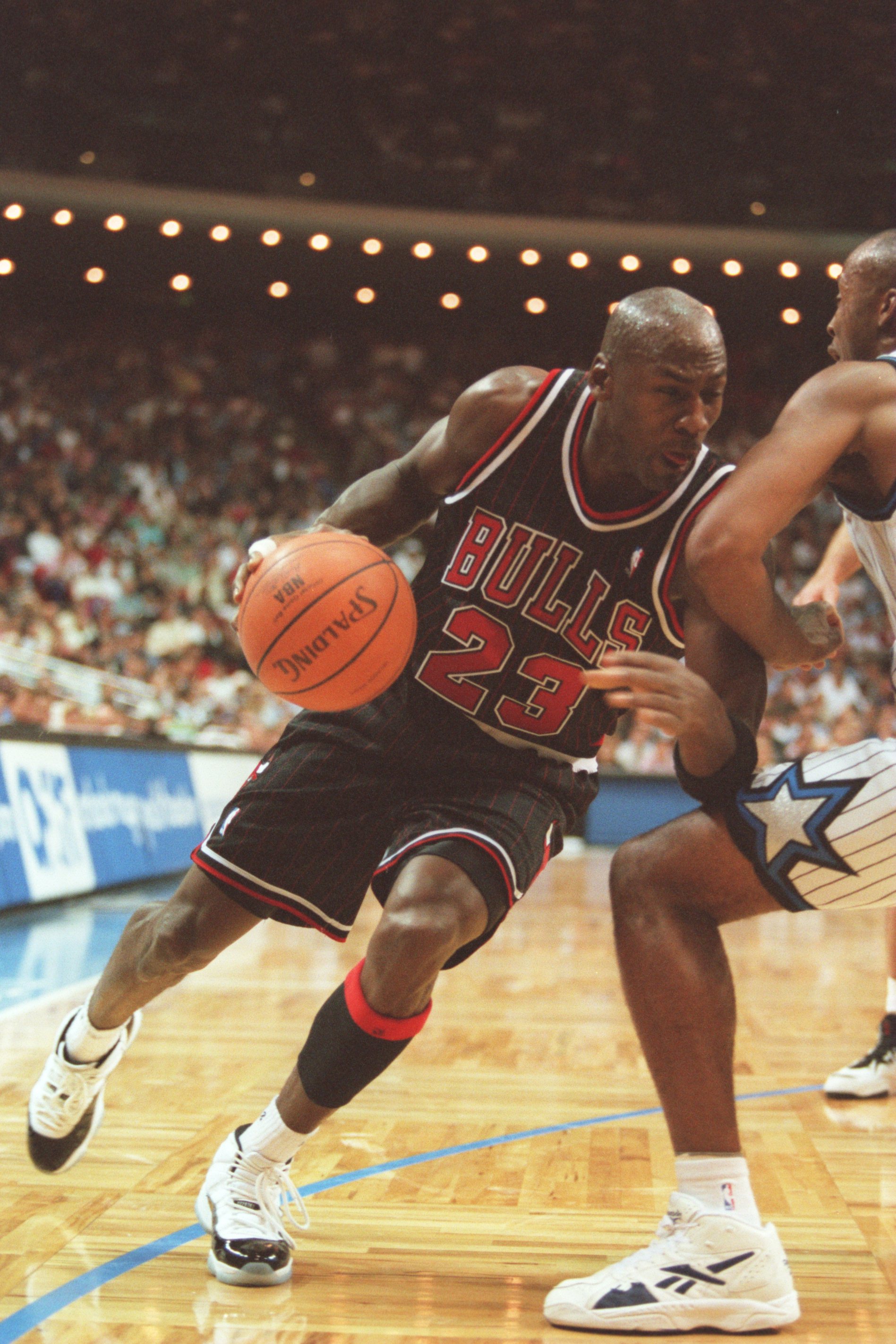 Jordan averaged 30.4 ppg at age 33! He had recently come out of retirement, and this was his first full season back. For all the doubters out there—Jordan led the league in scoring, shot 50 percent from the field and 42.7 percent from three-point range. Wow!

Jordan was named NBA MVP as he led his team to the greatest record in NBA history.

Every season teams that start off well hope they will win at least 70. They never do. Much less 72.

This season showed he was no fluke whatsoever. 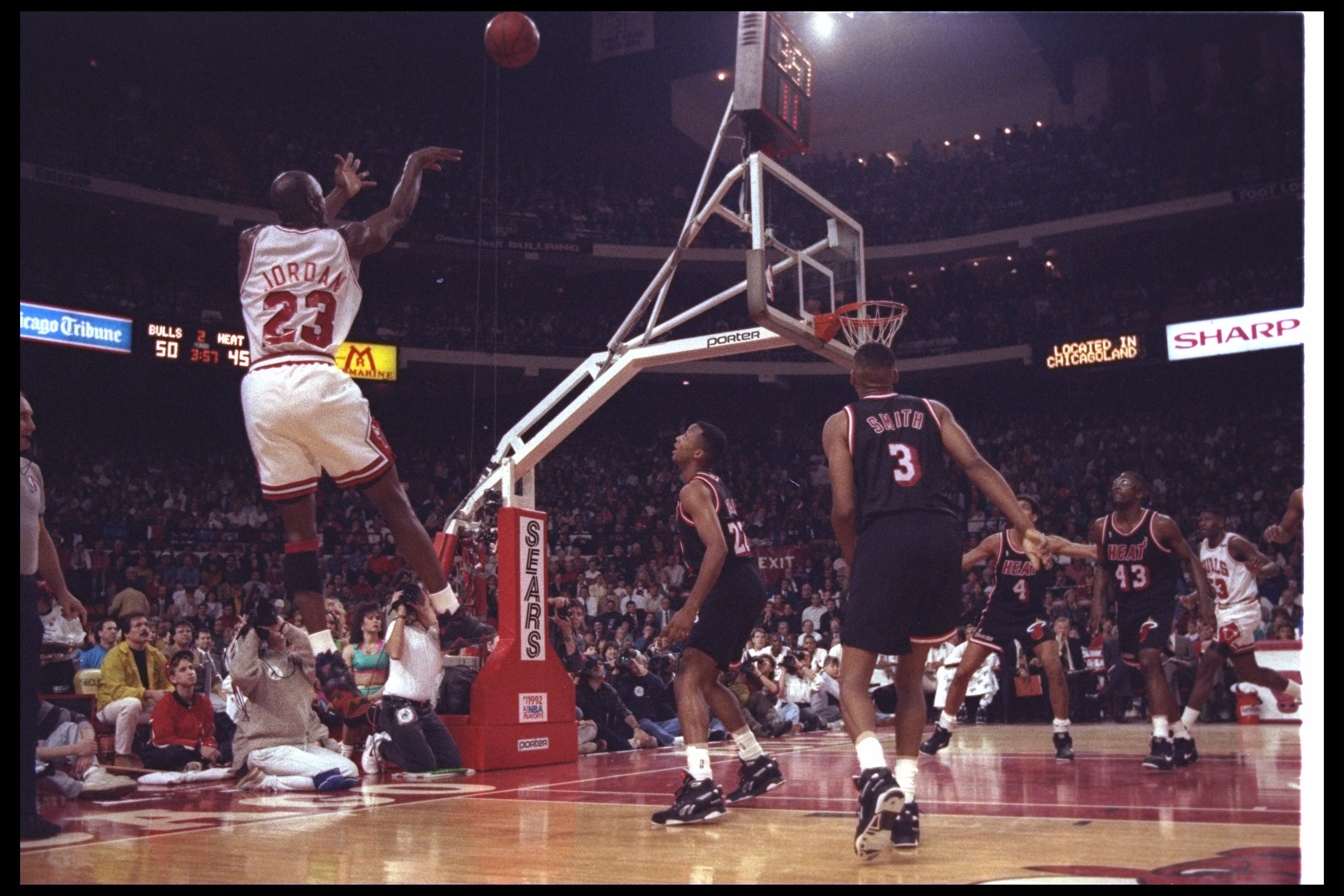 This is the season that Jordan's teammates were also on fire. The season culminated in the Bulls' second title win in two seasons, and the world got to see Jordan do what he did to Portland in Game 1 of the Finals.

Six threes before halftime and 35 points, at the half! 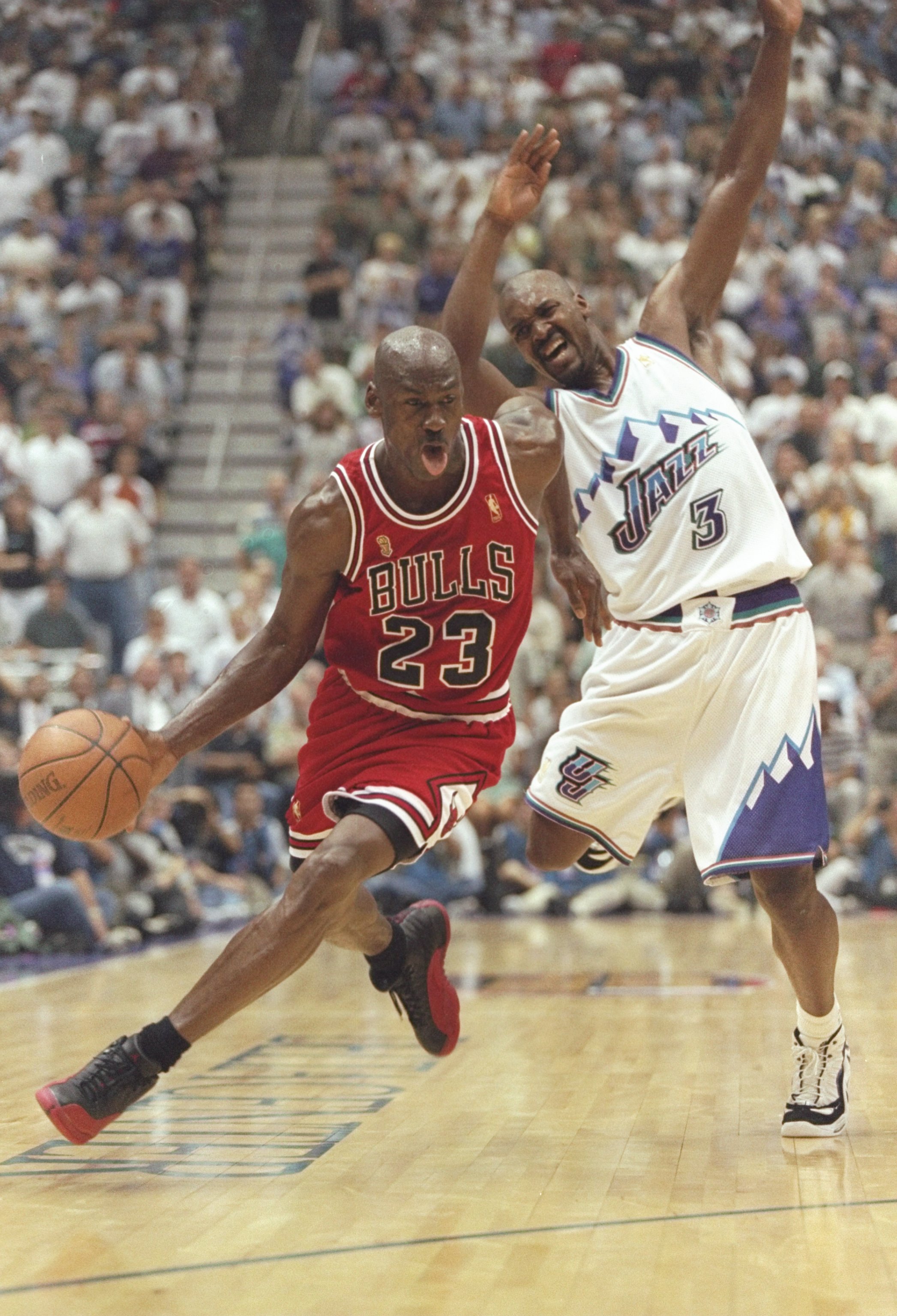 Jordan, for the ninth time, led the NBA in scoring; and he did it at age 34.

Not only that, the Bulls posted the second highest winning season ever at 69-13.

That's how great this guy was. He grabbed 5.9 rebs per game, dished off 4.3 assists per game and stole it 1.7 times per game.

Jordan won his fifth title and fifth Finals MVP award in this season.

Too great to comprehend. 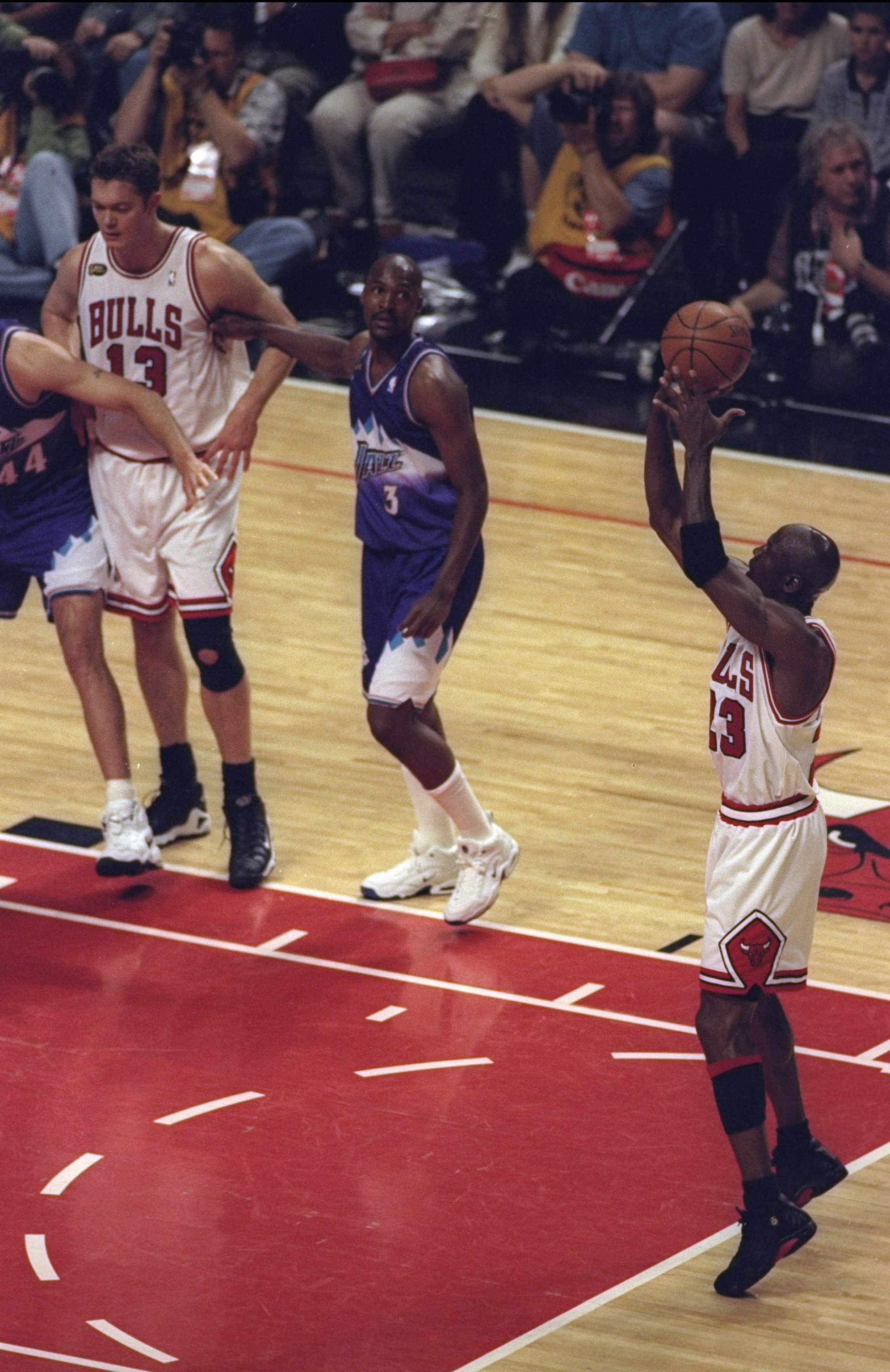 I do not know how it is possible but Jordan led the league in scoring for an all-time-record 10th time in 1998, and at age 35!

The old man somehow got the 62-20 Bulls back to the Finals, and won it all. In Game 6 the Bulls took the title, and Jordan scored 45 points in that game. He would not let them lose.

He scored 45 and then retired for four years.

I was 12 years old in 1988 and I have watched the NBA for 22 straight years, and NO ONE comes close to MJ people. I'm sorry—but I saw it before my very eyes. Too bad so many of you missed it. I truly do feel sorry for you, because YouTubeing Jordan pales in comparison.