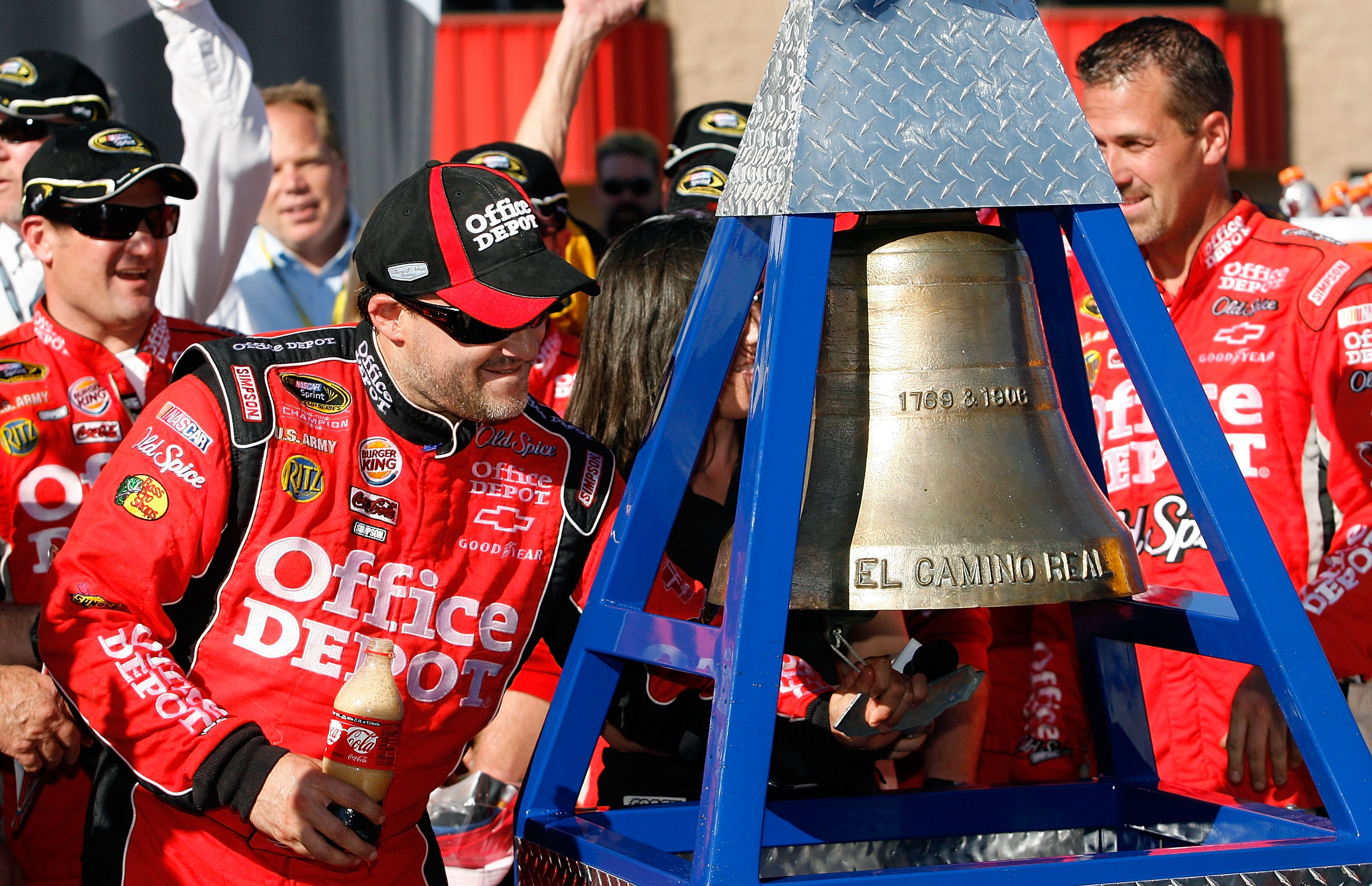 Doesn't it figure? NASCAR decides to pull the plug on Chase racing at the Auto Club Speedway after years of subpar and uninteresting racing. They shorten the track's final Chase event by 100 miles for this year, and as part of the 2011 schedule realignment, kill it entirely after this year.

Then the Pepsi Max 400 happens, and California actually puts on a heck of a show.

Never mind the fact that Jimmie Johnson didn't win, like he normally does at half the Chase tracks. There was drama throughout the race—would all of the Roush Fenway engines grenade like Greg Biffle's, could Mark Martin partially redeem himself for a miserable year by winning, can Clint Bowyer win another Chase race and stick it to the man, per se—in a way that California has desperately needed it for a long time.

In the end, Tony Stewart took the victory, Johnson extended his points lead, and four drivers are now basically out of the championship hunt. As for California, it will need to find a way to translate Sunday's excitement to its lone race next year.

So which Chasers are hot, and which ones aren't, going into the hub of the sport at Charlotte? Read on. 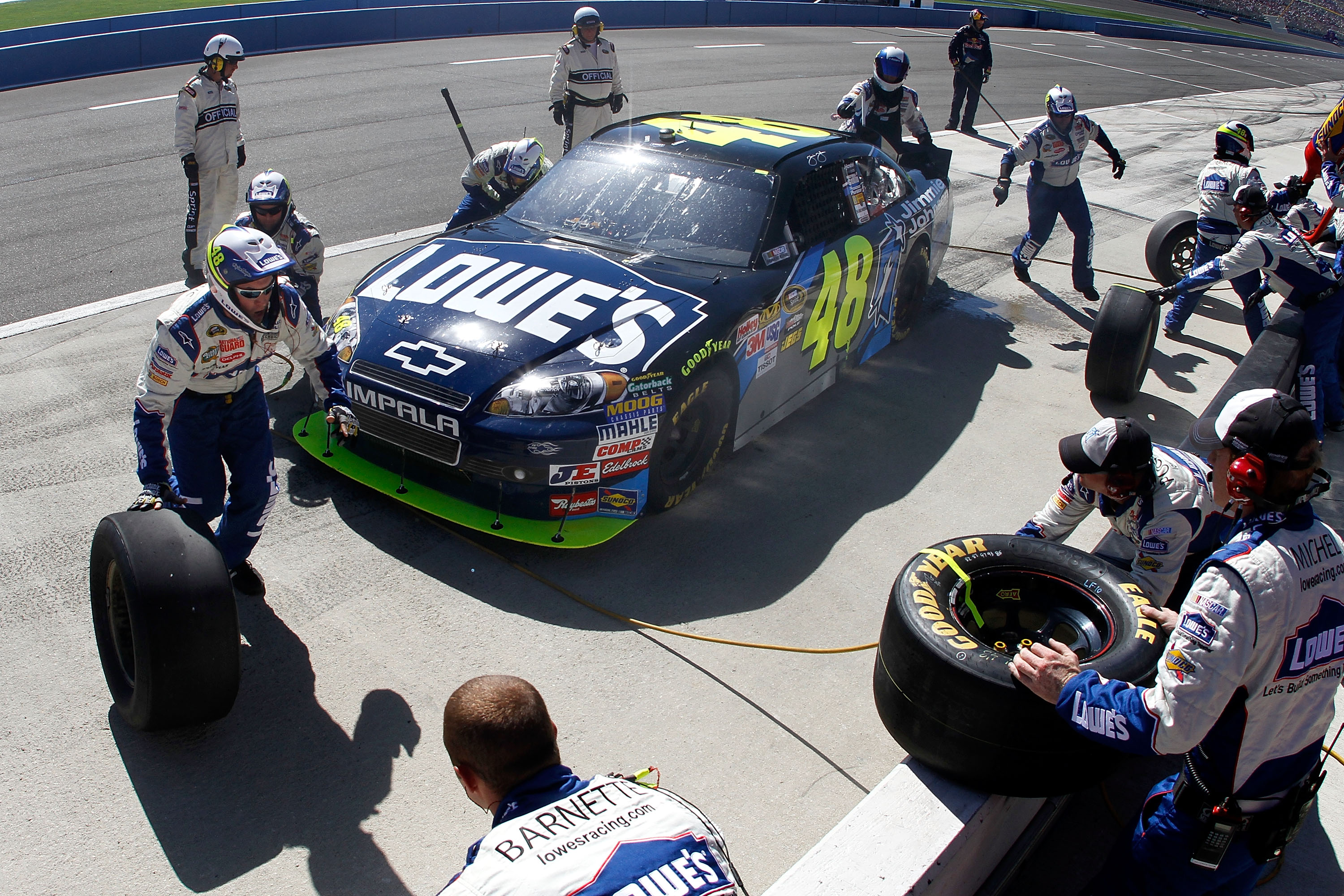 OK, so he ONLY finished third. That was good enough to beat nine of his Chase competitors, most importantly his closest threats. We all know that Clint Bowyer has conceded the title hunt to try and help his teammates win, and that Tony Stewart is still trying to dig himself out of a hole from Loudon and Dover. Those were the only two drivers to gain any points on Johnson, and in neither case did they make up much ground. 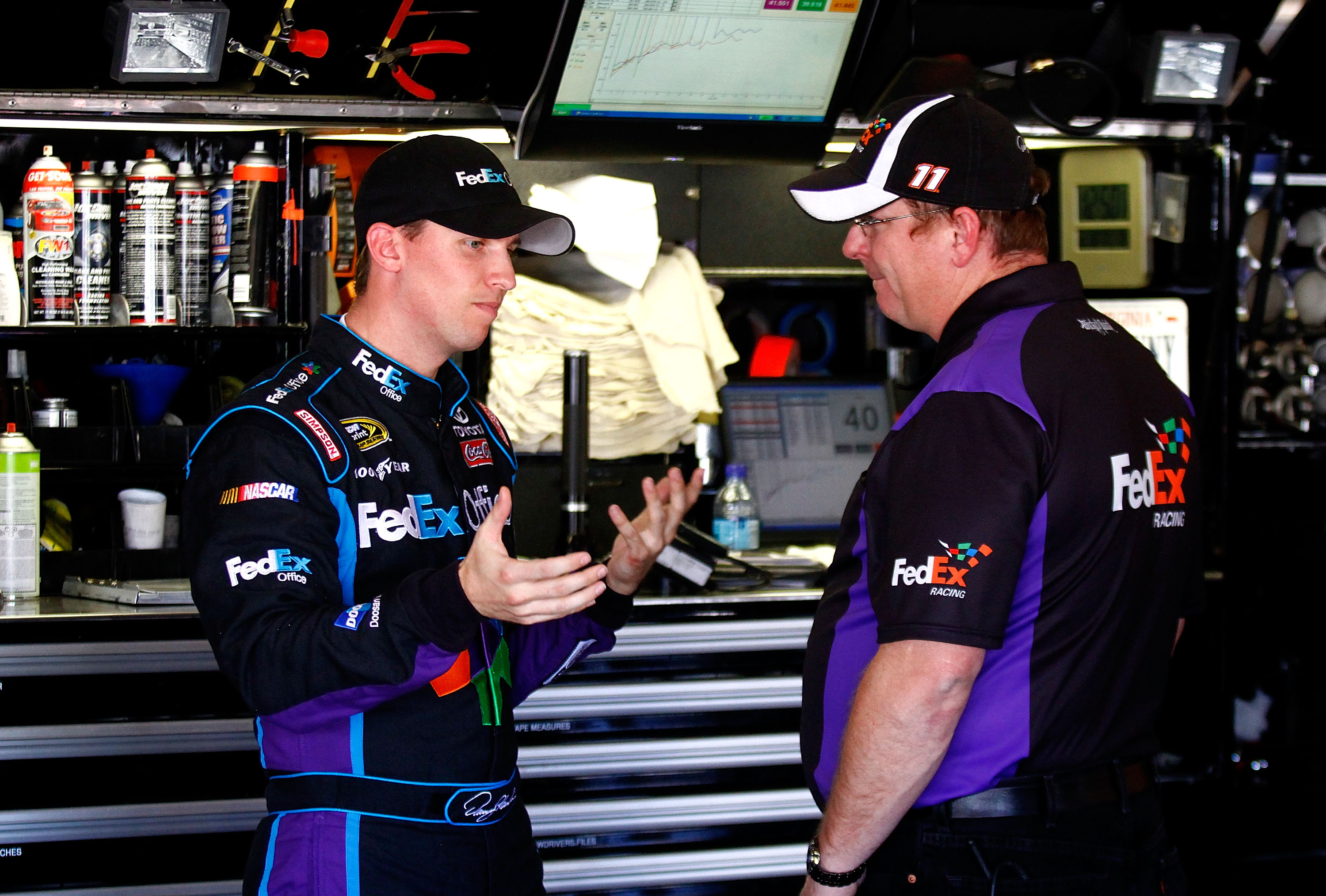 Hamlin said at Loudon that his goal was to survive the first half of the Chase and turn on the heat at the end, at the tracks where his No. 11 team normally performs well. Perhaps that strategy is a bit off. Thirty-six points is a slim gap for now, but getting beat by even a single spot every weekend isn't going to help. Hamlin needs to be acutely aware of where Johnson is week in and week out and race based on that.

Of course, maybe I'm looking at it the wrong way. After all, Hamlin did pull an eighth place finish out of starting at the rear. That says something about that team. 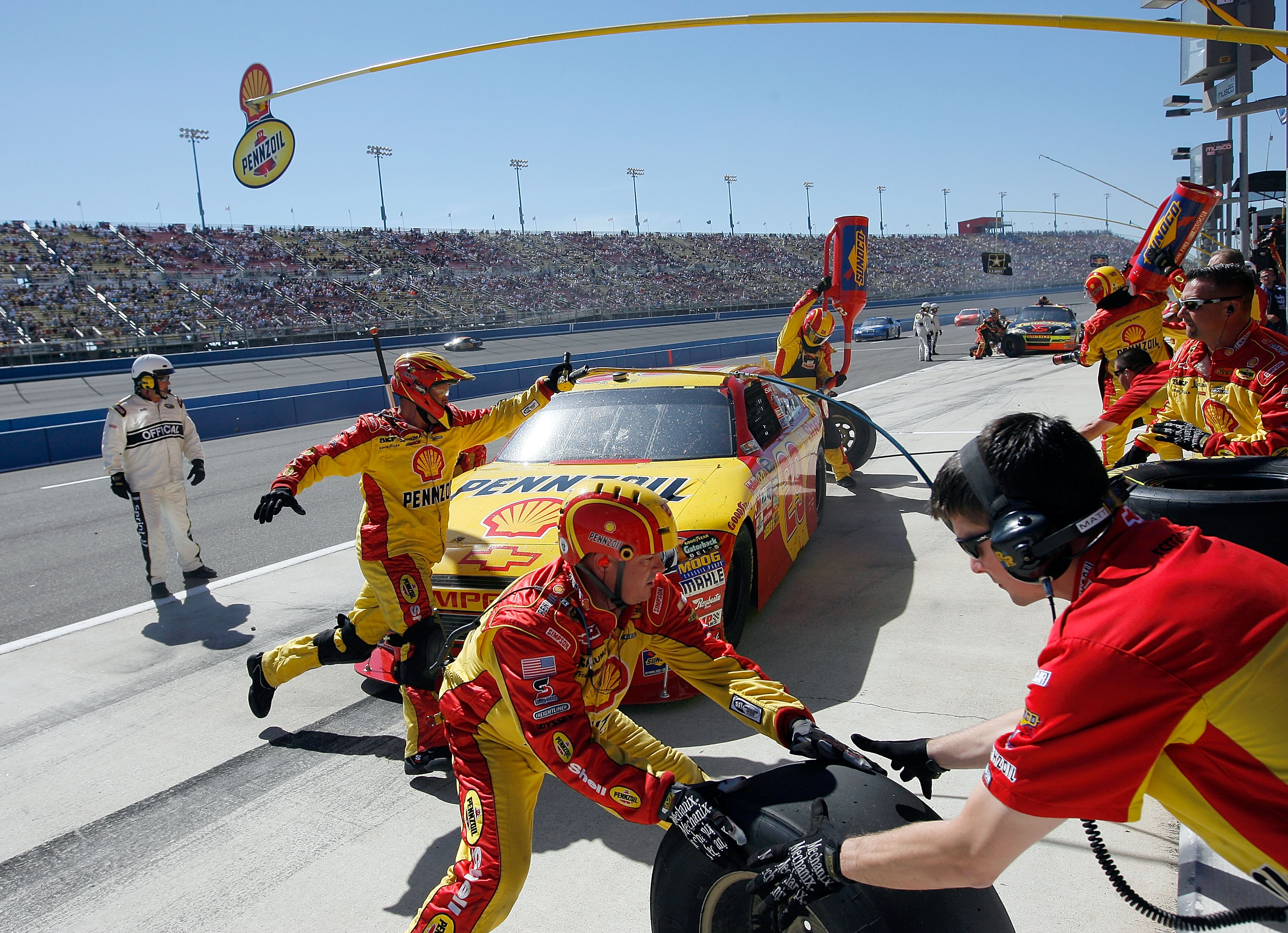 Seventh. Yet another strong points day for Harvick. He puts them together like nobody else this year. Even the times his car has been absolute crap, he's somehow pulled out a decent run. And yet he's still third in points, 54 back. Under the old format, he'd be up 231 on second-place Jeff Gordon.

I wonder how happy Happy is with the Chase system right now, or if he's beginning to identify with Gordon circa 2007 yet. That was another year where one driver dominated, only to lose the title to Jimmie Johnson. 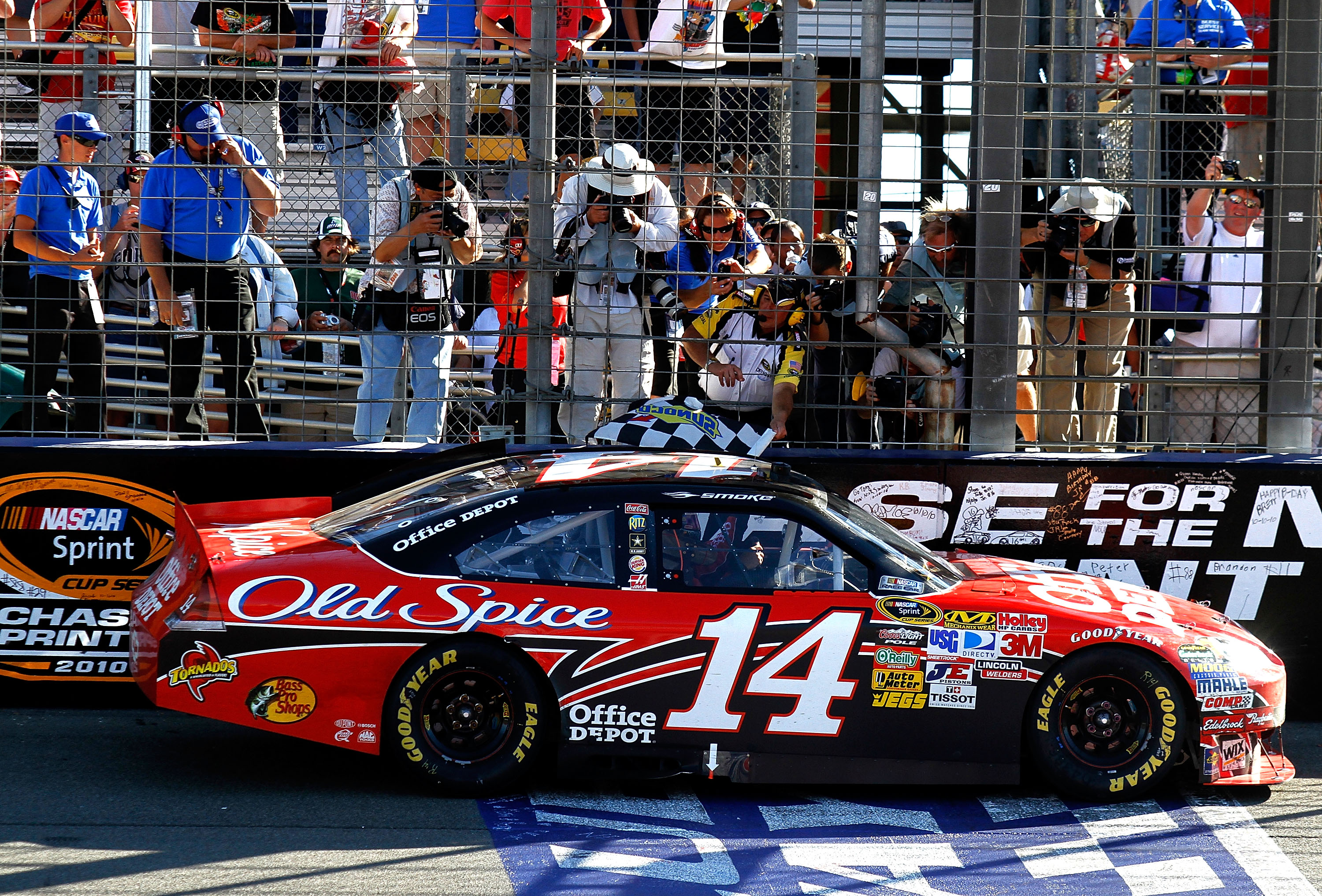 This is the kind of thing I've been saying Smoke is capable of all along in the Chase. The series' best team all summer (seriously, look the stats up) finally put it together in a Chase event and dramatically improved their chances of challenging for the title, especially as some other competitors struggled. The No. 14 team jumped five spots in the standings with that run.

The most telling stat: If the Loudon race had worked out for him, a 94-point positive swing, Stewart would now be second in the title hunt, achingly close to Johnson. So it goes. 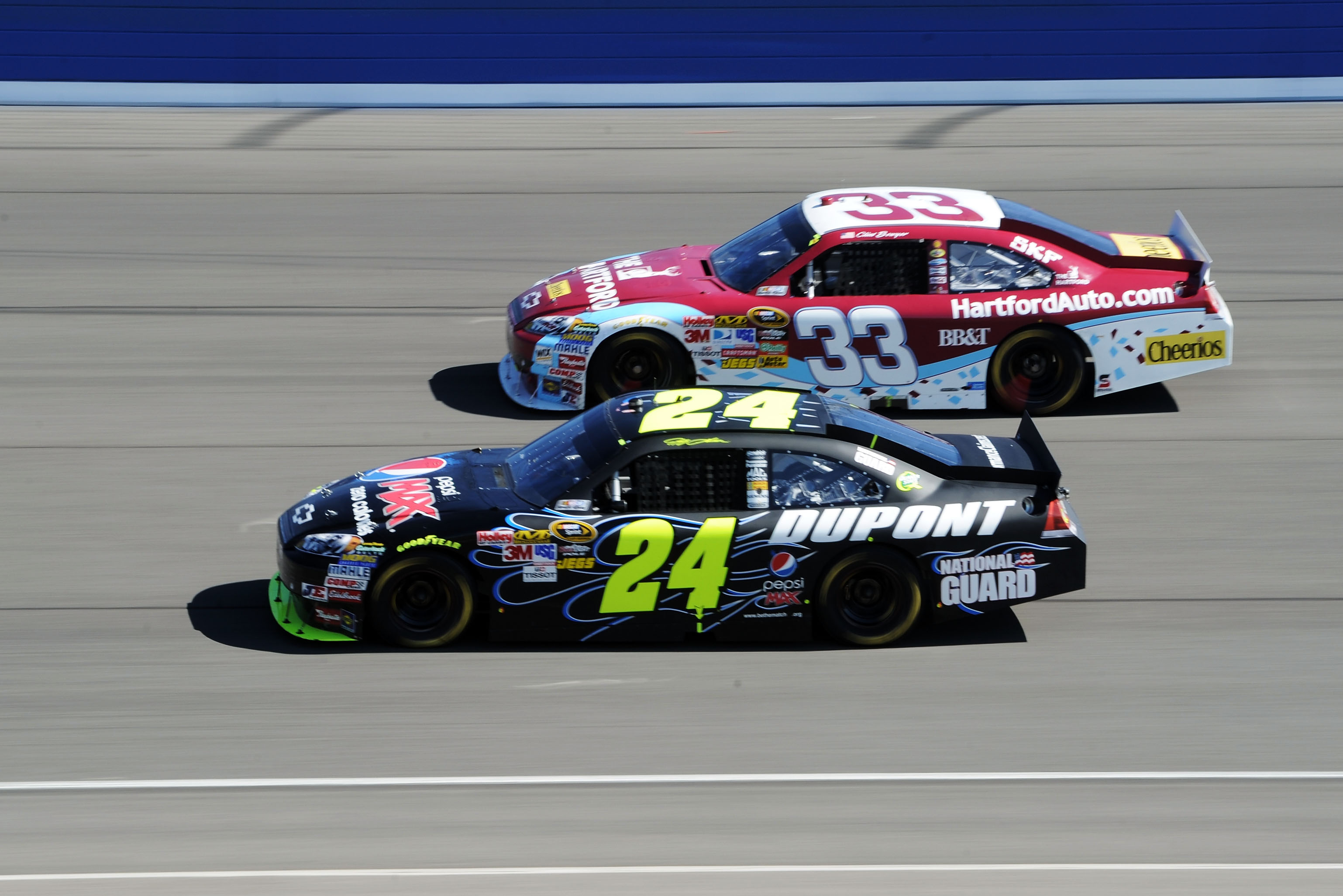 Finally, the No. 24 team showed some bite at California. Perhaps it was the desire to look good for weekend (and race) sponsor Pepsi Max, or getting sick of teammate Johnson's leading performances week in and week out, or even that the team just put together a hell of a car. But Gordon had a car that could have won the race, even if it only wound up ninth.

It would be nice if this team could take at least one Chase victory. It's not impossible. 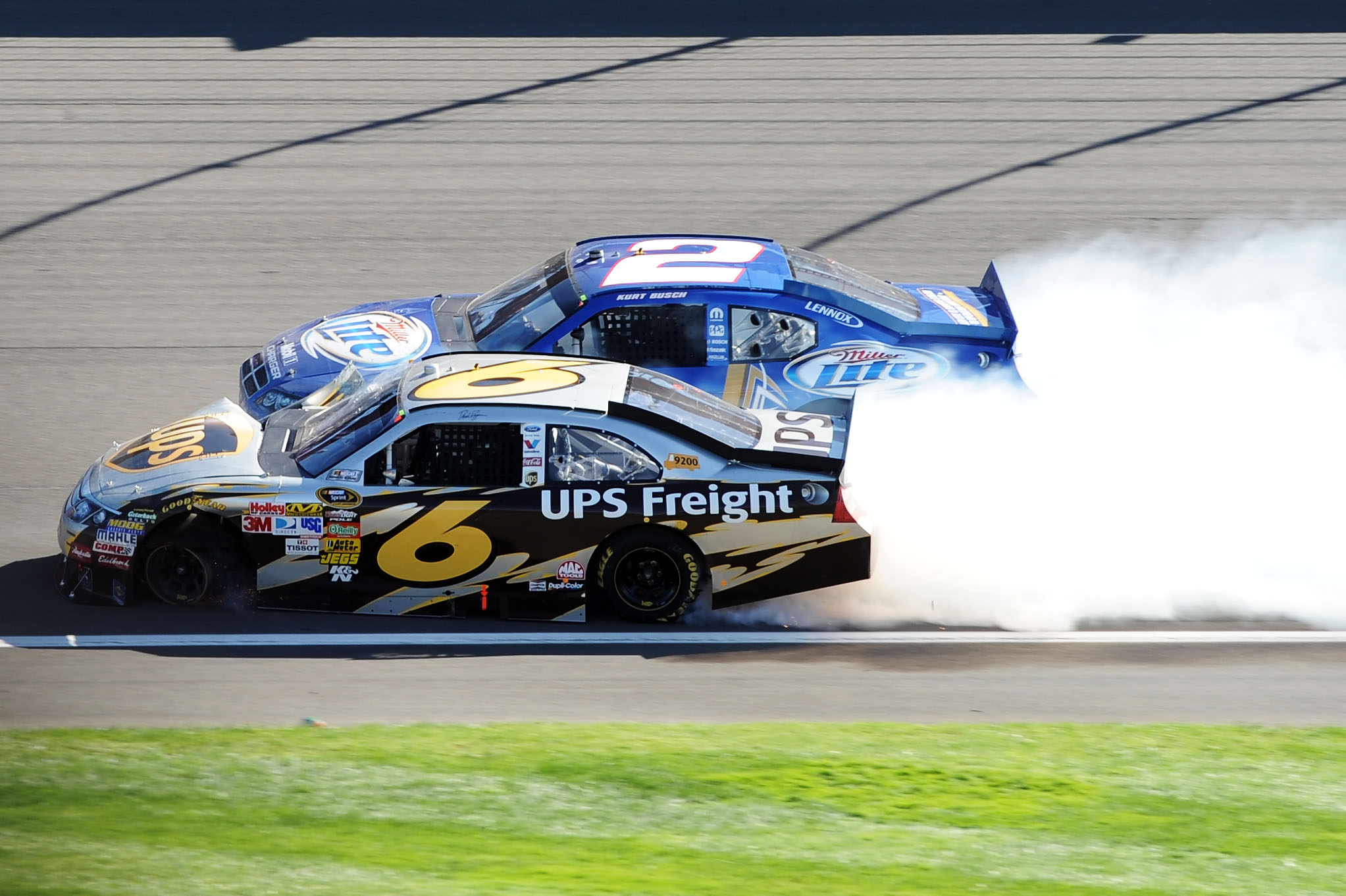 Sixth in Chase points, sixth in these rankings. Mid-pack and mid-pack. Unfortunately for Busch, that was also his California race, and I don't just mean of the Chase drivers. He finished a disappointing 21st, aided by a David Ragan misstep up into his car in the race's closing laps, to put the team about a race's worth of points behind points leader Jimmie Johnson.

Now, 143 points isn't an insurmountable deficit over the course of six races. But with Johnson in the lead, it may as well be. 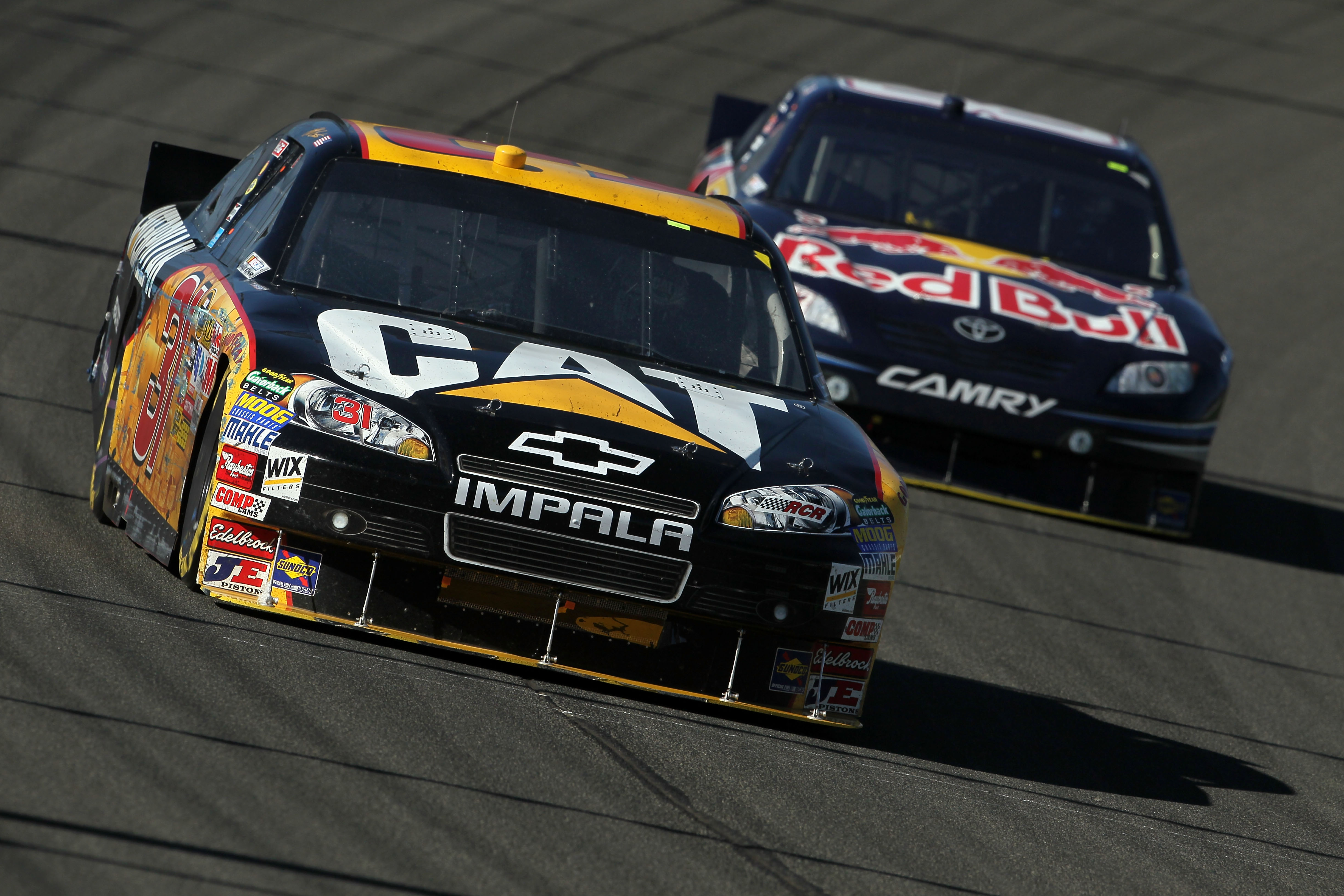 Tensions at RCR are running high. First, Burton's crew chief, Todd Berrier, experienced dizziness during morning chapel service and missed the start of the race. Then, teammate Kevin Harvick complained about not getting enough room during a three-wide battle that also included David Reutimann. The race ended with a 23rd place finish that couldn't be blamed on any wrecks or mechanical failures.

But give Burton a little credit: that mediocre finish actually moved him up a spot in the points. Imagine if the team had actually put together a strong run. 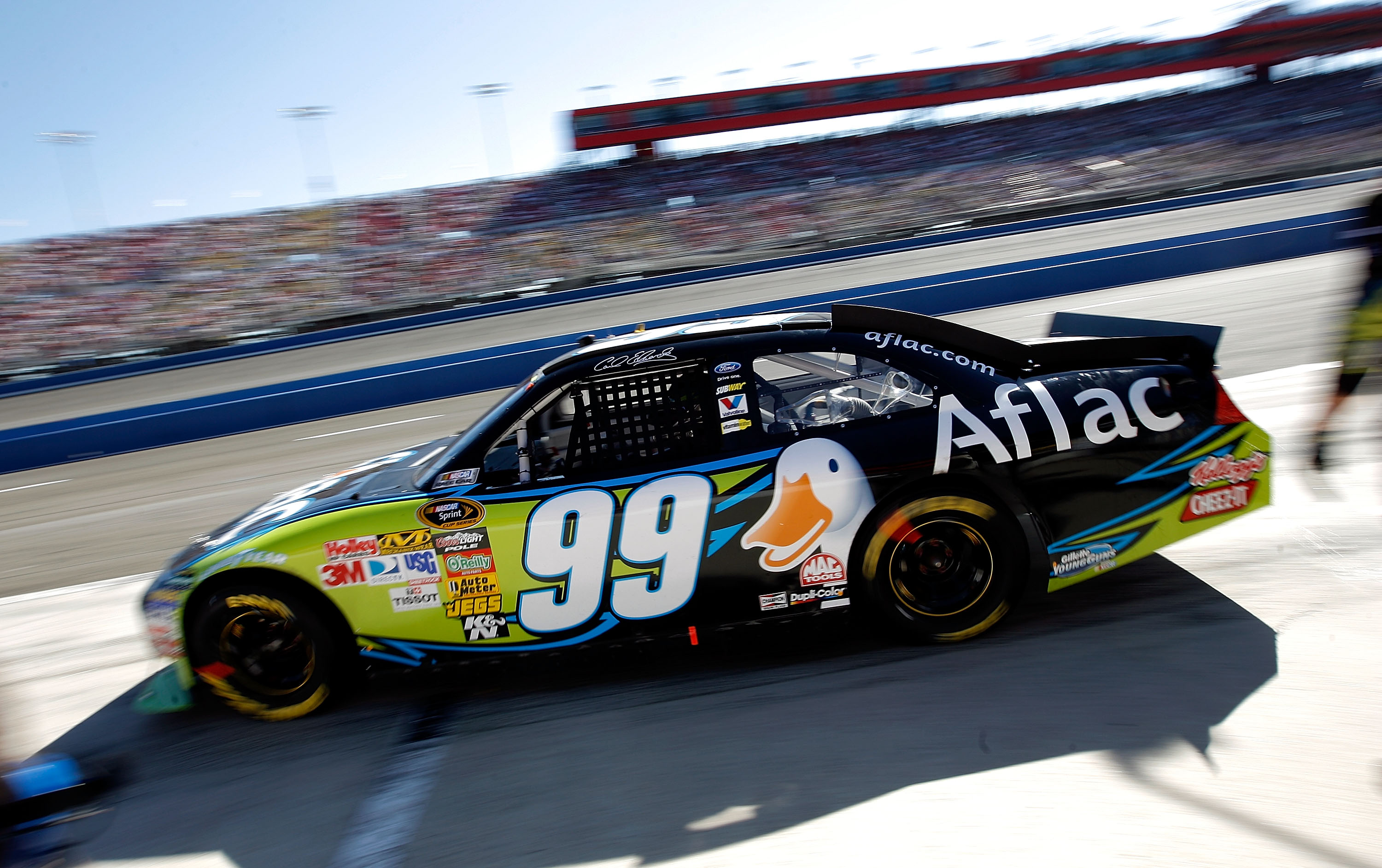 What if I told you that Edwards' Chase hopes died with his engine on that early restart? Would you believe me? The proposition isn't too far off13 laps down after spending time in the garage for repairs, Edwards could manage no better than 34th and dropped three spots in the standings.

Edwards hadn't been one of the strongest drivers in the Chase in the first place, but he had a lot of momentum previously. It will be interesting to see if the team can rediscover any of that. 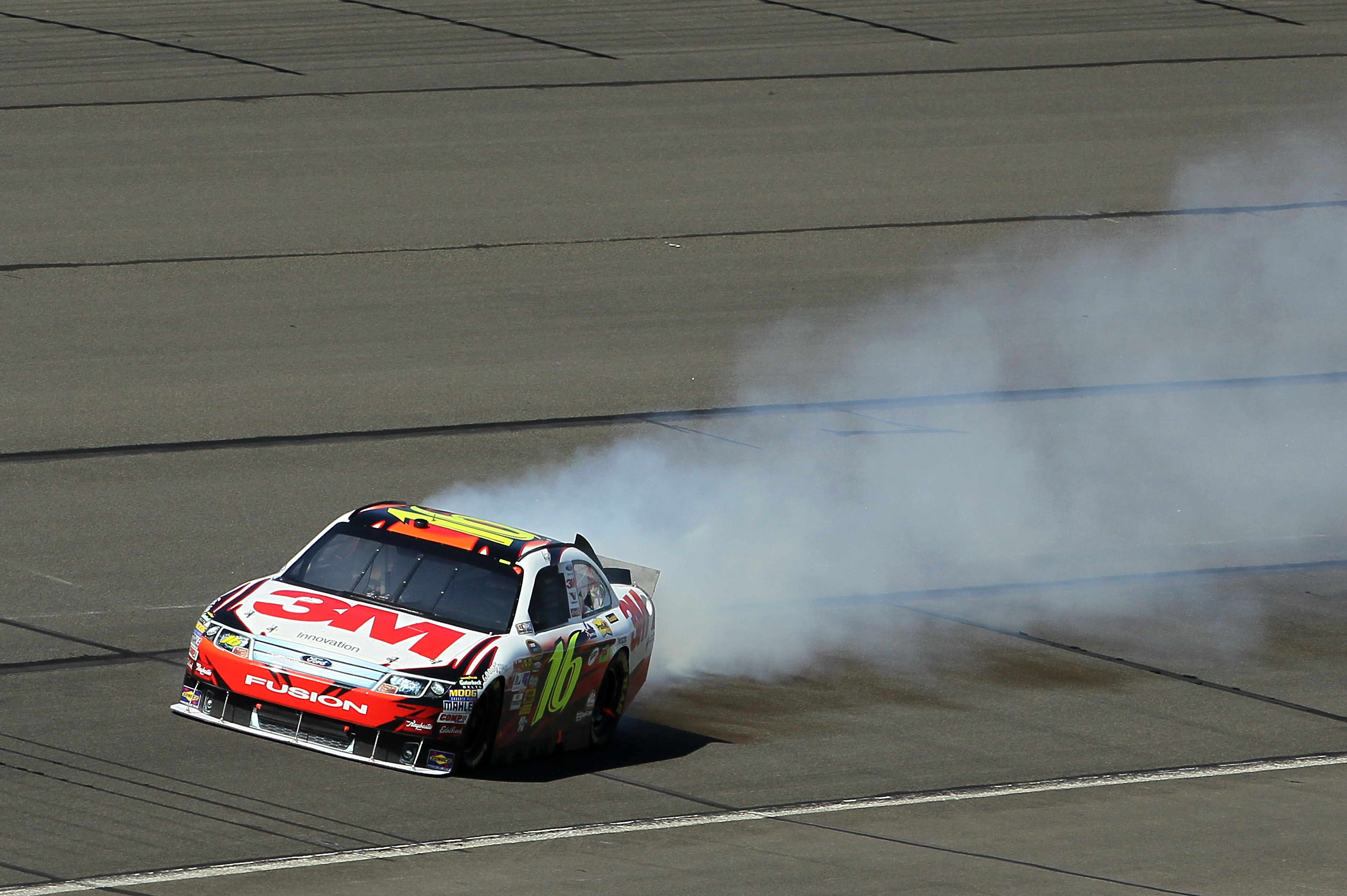 It was mentioned early in the race broadcast that crew chief Greg Erwin takes some of Biffle's early-race comments in stride. Erwin noted that when his driver complains towards the start of the event, the team usually produces a solid finish. For example, at Kansas, Biffle said "We're in trouble" early on, then went on to win the race. Biffle said "We're in trouble" early on at California too. Then the engine let go.

Think Erwin's going to think twice next time his driver says that? 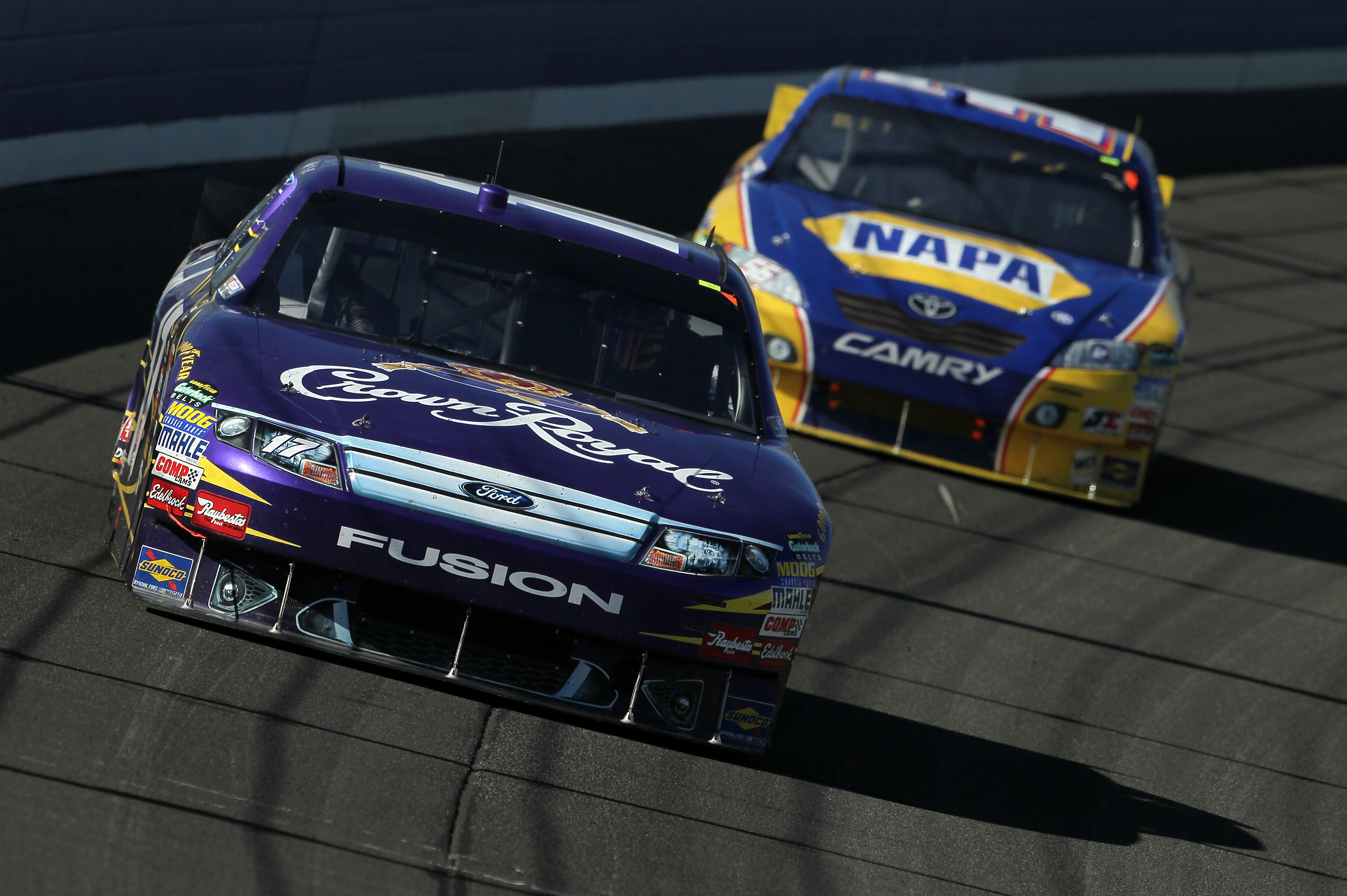 Good thing Matt's sponsor is an alcoholic beverage, because the entire Roush Fenway team going to need plenty of it after that finish. Start third at one of your best tracks and finish 30th? And STILL carry the torch for your entire four-car team?

The only solace Kenseth can take is that he's not last in Chase points, although it took a 150-point penalty at New Hampshire for Clint Bowyer to make it so. 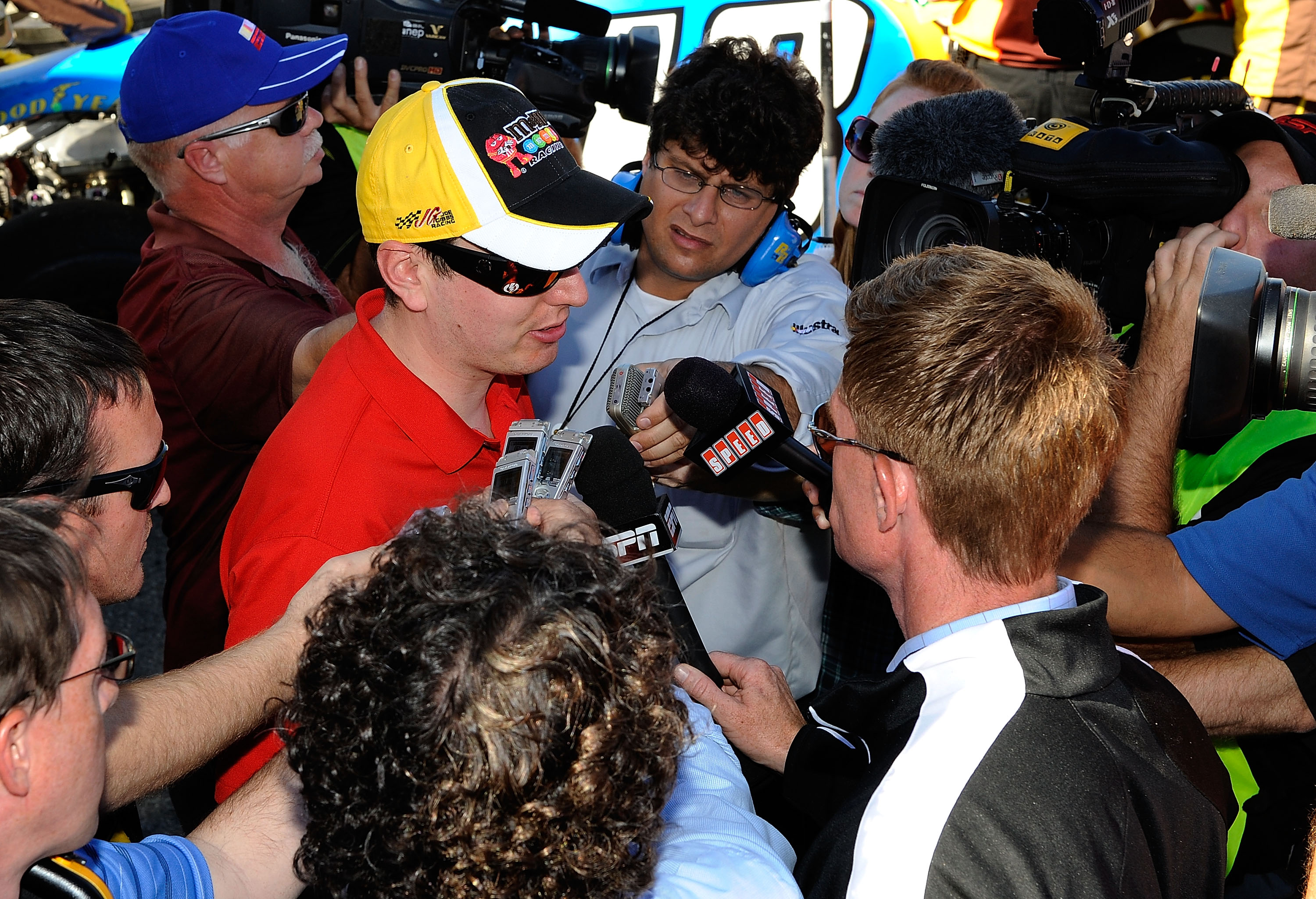 Now that Rowdy has gone on the record saying his Chase hopes are over, they are. Outright admitting that contributes to his low (even I'll admit that this is perhaps too low) ranking this week. There's no better way to kill any optimism left on a team than for a driver to go out and say that.

We've seen the younger Busch brother mature a lot this season, but admitting defeat with six races to go is still a little early. Remember what Jimmie Johnson did in 2006...oh, wait, he didn't have to race himself. 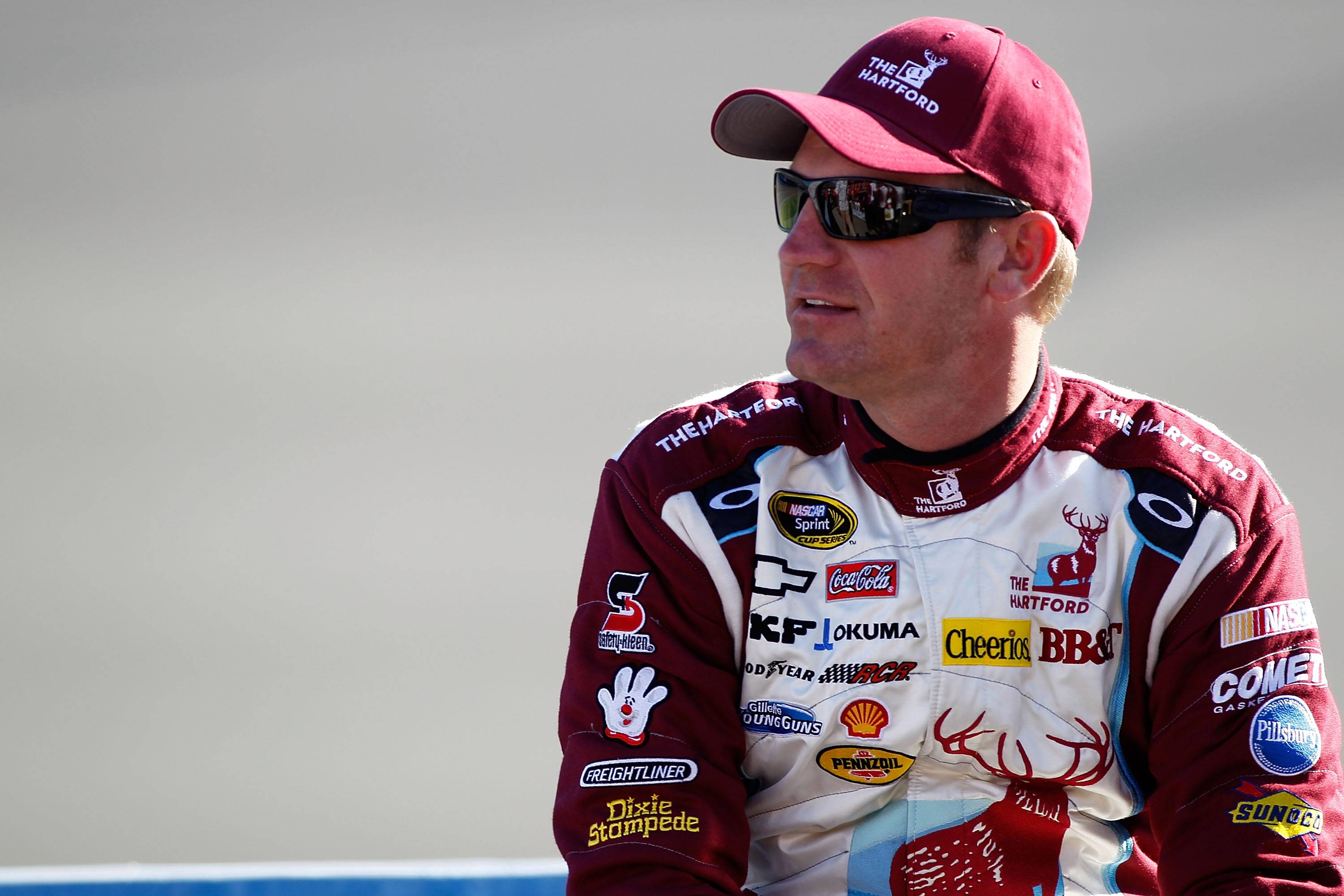 Imagine where this team would be without the Loudon penalty and subsequent unfocused Dover race. Then look at where they are now. If you're wondering why there's no real dark horse contender in the Chase this year, as there almost always usually is, look no further than that penalty.

That's all for this week, folks. Enjoy Charlotte, and let's all hope that a certain somebody doesn't increase his points lead next week, if only to keep things interesting for the rest of us.