Manu Ginobili: Is the San Antonio Spur a Lock for the Basketball Hall of Fame? 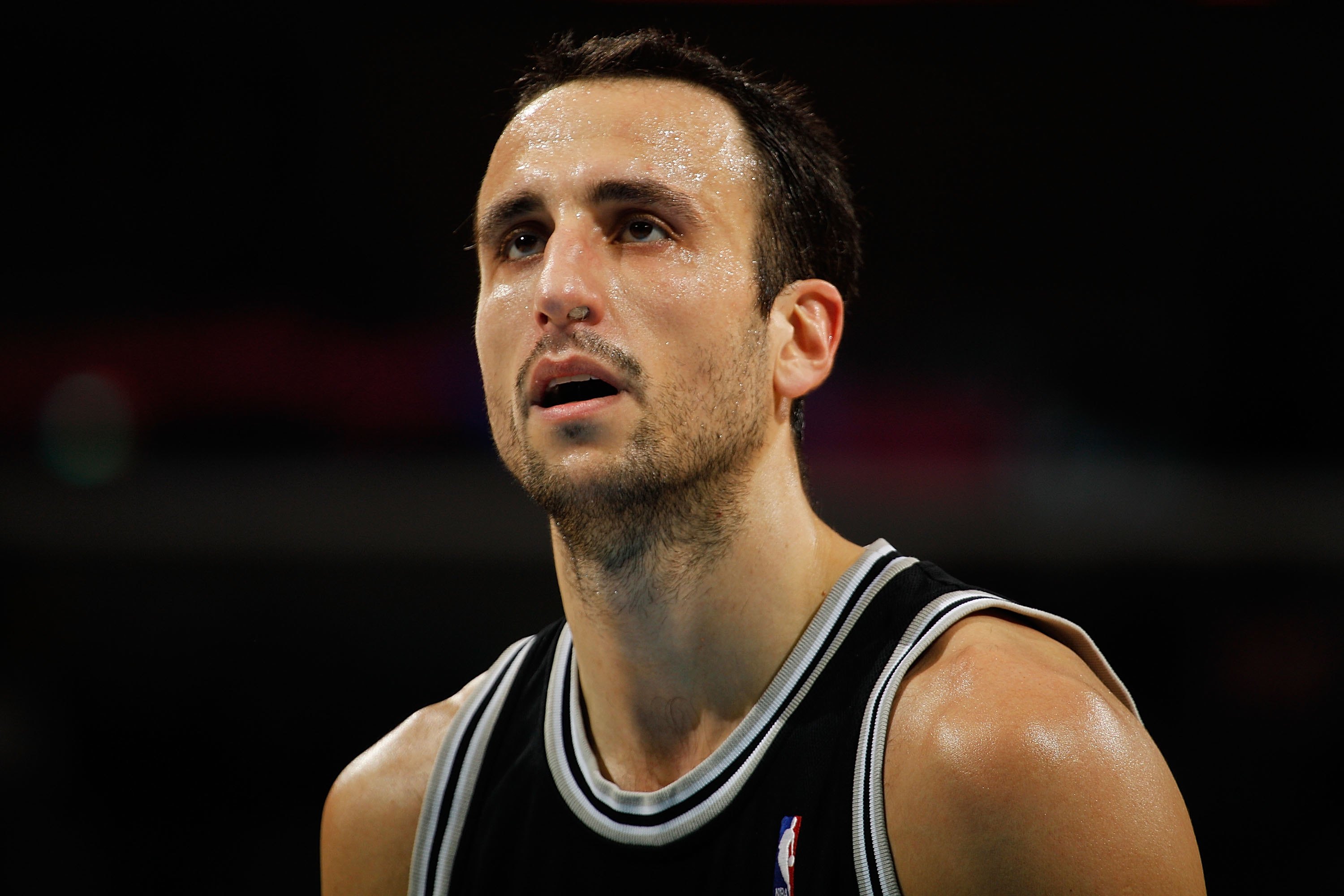 As a Spurs Featured Columnist, I didn't want to box myself in with a bunch of stories about the upcoming season (Spurs will win the NBA title, you heard it here first), so I figured a good thing to do around mid-week would be to look at a few off-the-radar things about the team I have grown to love over the last 30 years.

The first thing I want to examine is a question that should seem rather simple: Is Manu Ginobili a surefire future member of the Naismith Basketball Hall of Fame?

As far as Halls of Fame go, baseball's is the most prejudicial and hardest to get into. Football's has the most easily recognizable signs (guys usually in their 40s or 50s wearing hideous pale yellow jackets.

The Naismith, on the other hand, is a bit...different, shall we say?

It includes some obvious choices (Chamberlain, Russell, and Jordan), but also has some head-scratchers as well (the best women's basketball coach from the state of Oklahoma is in, but not Bernard King?)

So to that end, I want to look at the candidacy of the best sixth man this side of Kevin McHale, Emmanuel "Manu" Ginobili. Let's reason together on this, shall we? 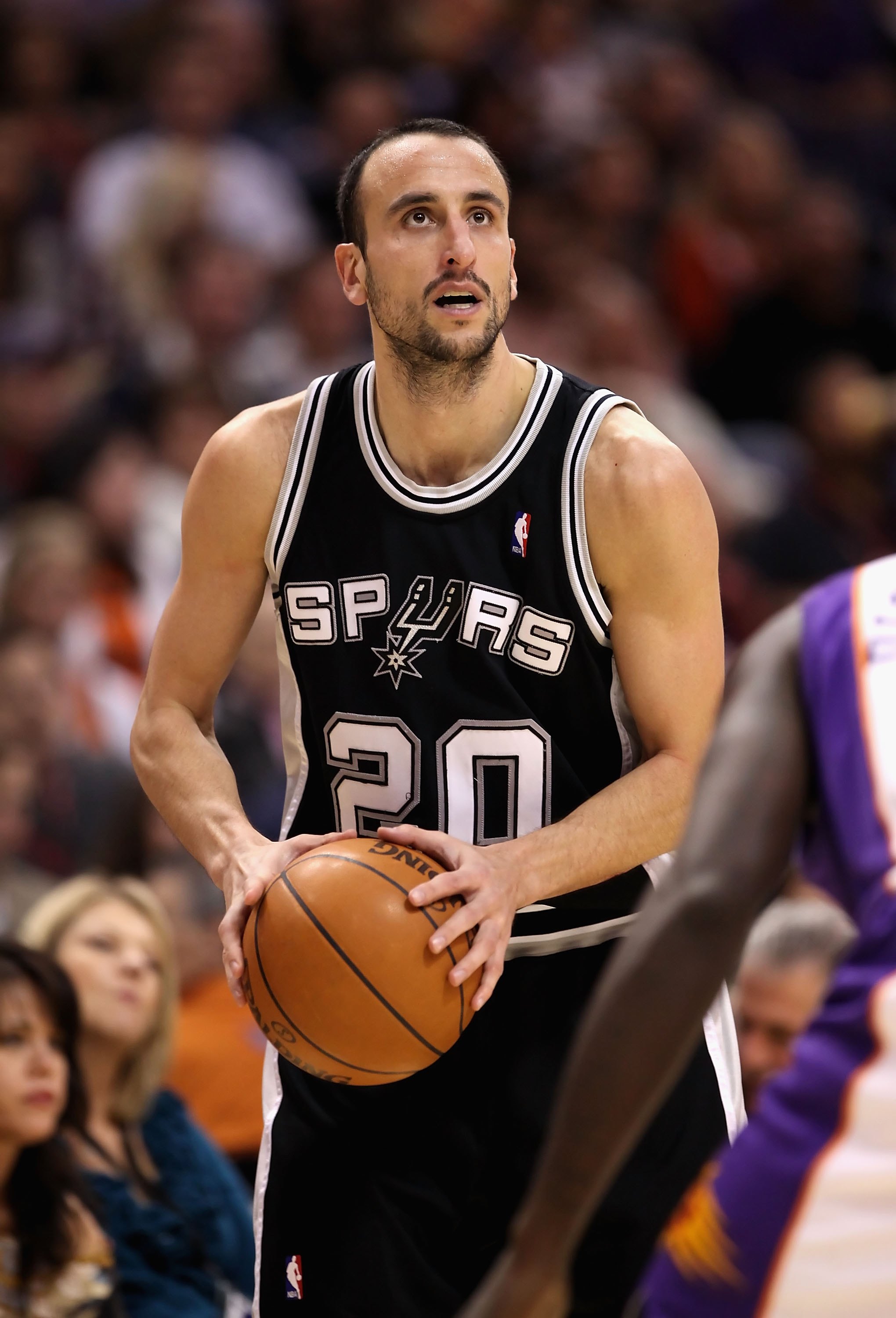 Three times, Manu has won an NBA championship with the Spurs. He has been the most clutch player for the Spurs seemingly since his first playoff game with them.

He has hit many big-time clutch shots, snatched more rebounds than a 6'6" guard should, dropped dimes like a pro quarterback, and stolen the ball like a expert thief.

Manu has caused Charles Barkley to scream "Ginobili!!!" in the playoffs more than a few times on TNT.  He has playoff victories over such stars as: Kobe Bryant, LeBron James, Jason Kidd, Chauncey Billups, Gary Payton and Carmelo Anthony (all played on different teams and all are Hall of Famers, for sure). I know those names may not mean as much since these were in team competitions, but beating these stars does not hurt Manu's cause.

The bottom line is: The man is a winner and clutch competitor on the biggest stage.

How many active players have more than Manu's three rings? Tim Duncan, Shaq, Kobe. I would've included Derek Fisher, but he was just along for the ride for rings one through three.

Ability To Impact a Game 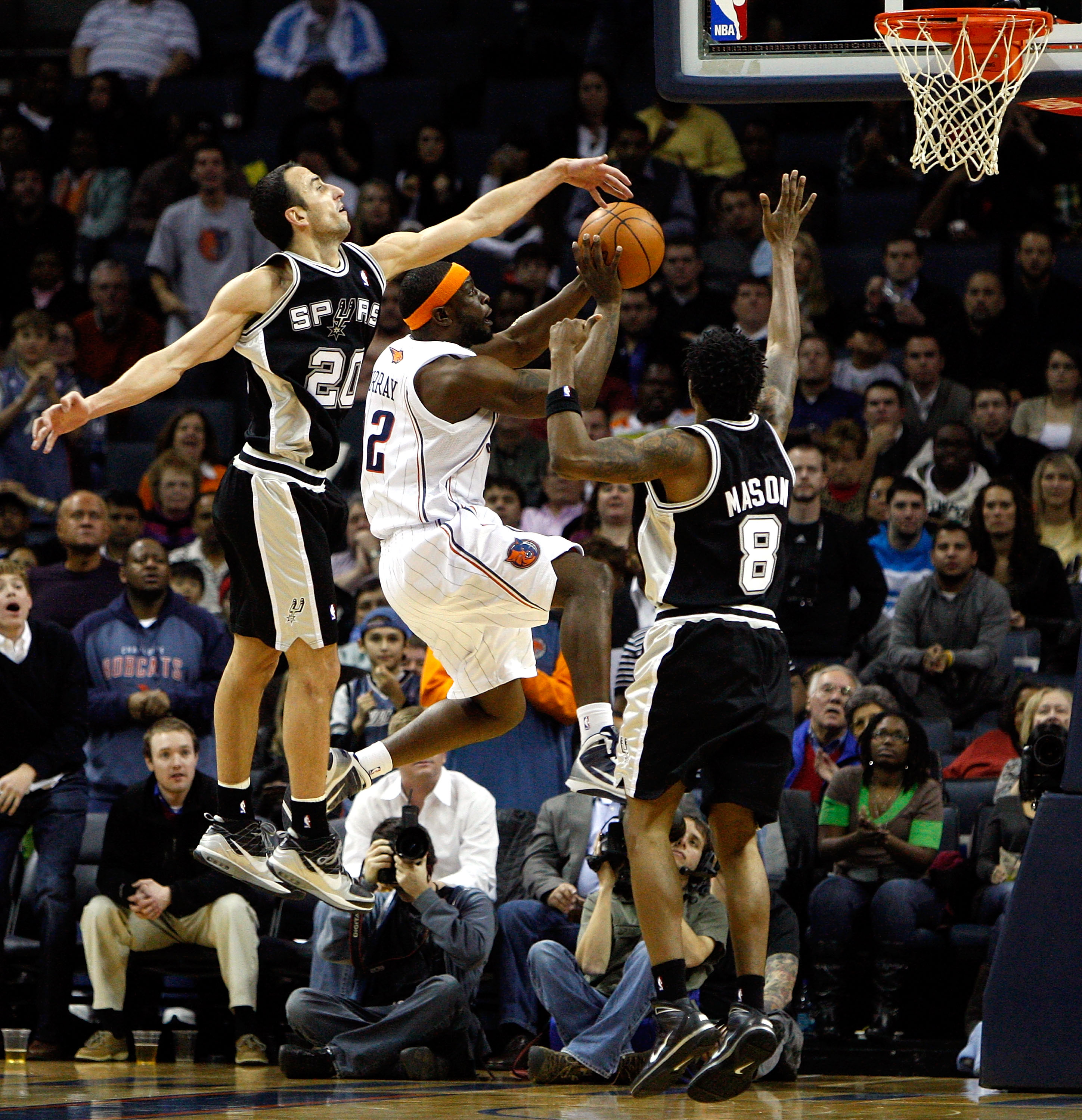 Whether it is an European step that borderlines on a travel/anklebreaker, a surprising dunk in traffic, or a block of a shot attempt by LeBron, Manu has left an indelible mark on the NBA.

His forays to the basket with his ability to finish left-handed have become not only commonplace, but a regular feature of Spurs games.

Do you want a clutch jumper? Manu's got it.

Need a big steal? Manu does that.

Want a rebound to seal the game? Manu can handle that.

Looking for a drive and dunk to close out a team? Manu's got it under control.

Dive for a loose ball? Catch a bat? Manu's your man.

For years, I watched as the Spurs were unable to match up at the SG position against players like Reggie Miller, Michael Jordan, Joe Dumars, etc  This is not to compare Manu to those men head-to-head, but he is similar to Dumars in the multiple ways that he influences games. He can both run an offense or be the closer for the team in any given game. He can play tough mano a mano defense and play off the ball for weakside assistance. Manu's game is as complete as it gets.

You don't have to believe me, just check out these clips: http://www.youtube.com/watch?v=w57zCDR81LQ

2004 was the year that inspired the "Redeem Team" to commit and play ball for the U.S. National Team.

That year was marked by the Pistons winning the NBA and the Olympic Team stumbling to a Bronze medal. It was the last year that the U.S. Committee would allow players to just be assembled two months before the Olympics. That team was marked by last-minute invitation declines (Kobe to deal with his legal situation, KG to deal with injuries and rest) and last-minute acceptances. (Stephon Marbury? Bad idea. Allen Iverson? See Marbury.)

Meanwhile, just a little bit south of the border, there was another team assembling itself in a championship-winning fashion, a team forged by several years of playing together in international tournaments and exhibitions.

Argentina took the gold medal that year, in no small part due to the leadership of Manu Ginobili. Other NBA players like Luis Scola and Andres Nocioni helped, but it was clearly Manu who rode that horse to the winner's circle.

His experience on the world stage was the engine and catalyst for the team to capture its first gold medal in basketball, claiming what was (and basically still is) U.S. property.

Much like Kobe four years later, Manu was the leader—even if he wasn't the leader in scoring, rebounds, or assists—and he was the man most responsible for his team's ascension to the gold medal stand. 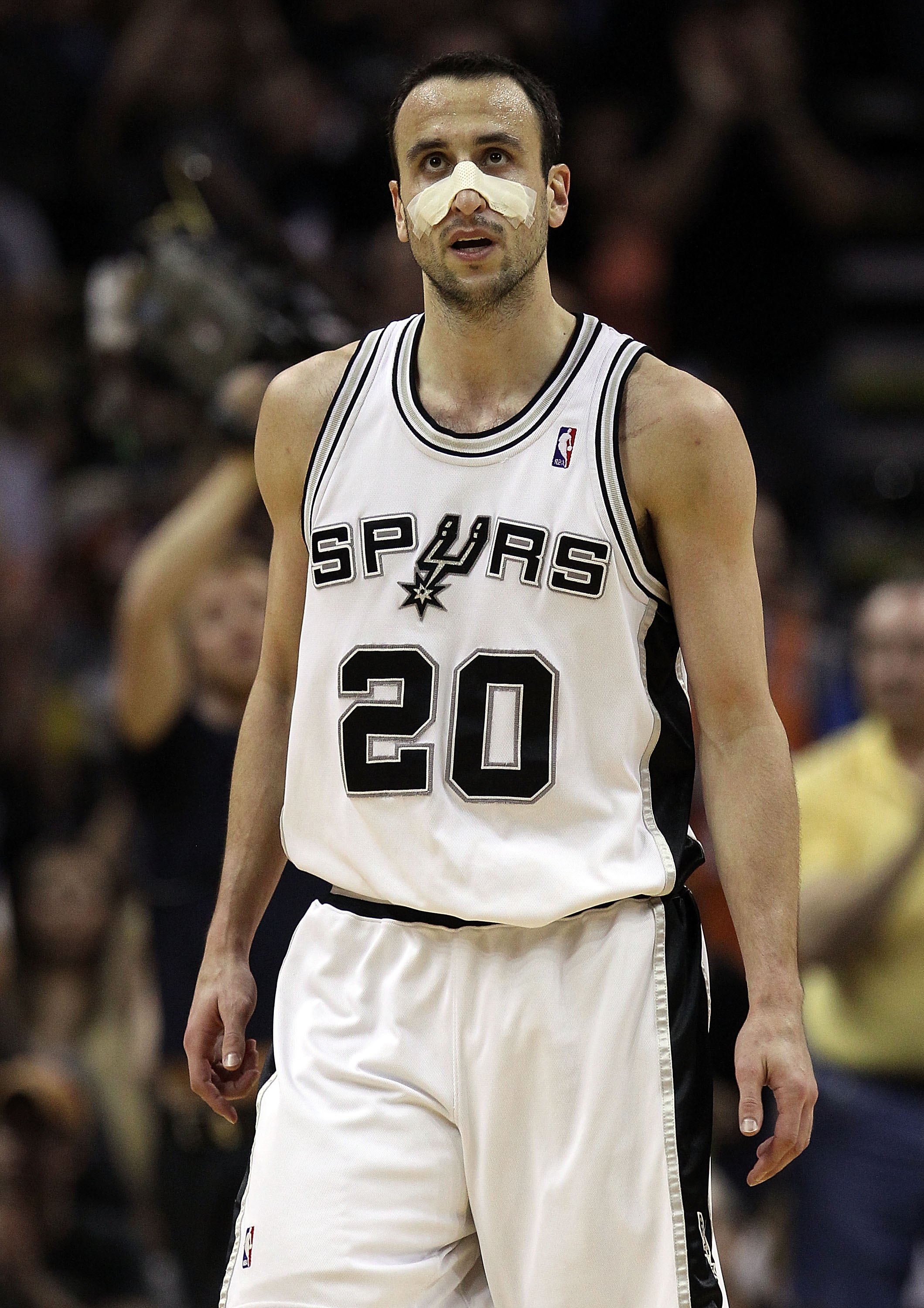 Ginobili's eight-year career in the NBA has been marked by his willingness to do whatever is needed to win games, whether they fall in January, May or June.

How many times have we seen him go flying into the crowd trying to save a ball in Indiana in December? Or how many times is he diving on the floor getting after a steal in Charlotte after the All-Star break?

Like Dave Cowens and Dennis Rodman, Manu has established a legacy that no game, no possession is out of reach or beyond extending maximum effort. If he is beaten, it won't be for lack of effort. And if you lose to him—and many have—you will know he didn't spare any blood, sweat, or tears to get it done.

Ginobili has paid the price for his ultra-competitiveness. His injuries have accumulated, especially as he slides (or dives) into his 30s. Can he beat himself up and still get through the three-year contract extension he signed last spring?

I wouldn't bet against him. He seems to be of the mind that if he can walk, he will play.

You don't help lead teams to Euroleague, NBA, and Olympic championships by just talent. A drive to excel and win is at the center of that individual.

By the way, only Manu and Bill Bradley have completed that troika. 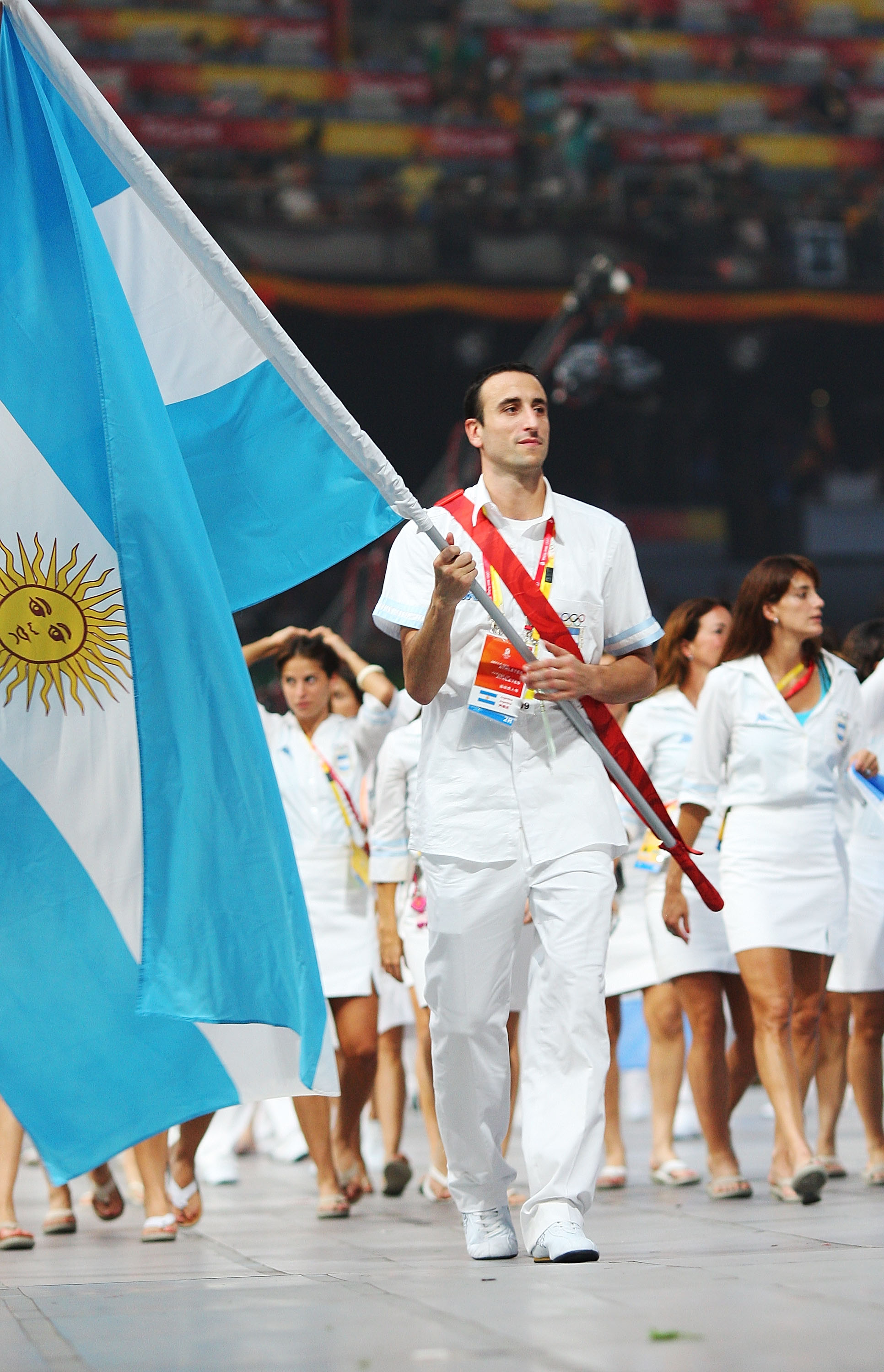 Rather than just say that Manu is the first foreign-born player to win NBA and Olympic championships and the second Latin player to become an NBA All-Star (after Panama's Rolando Blackman), let's list his many accomplishments: 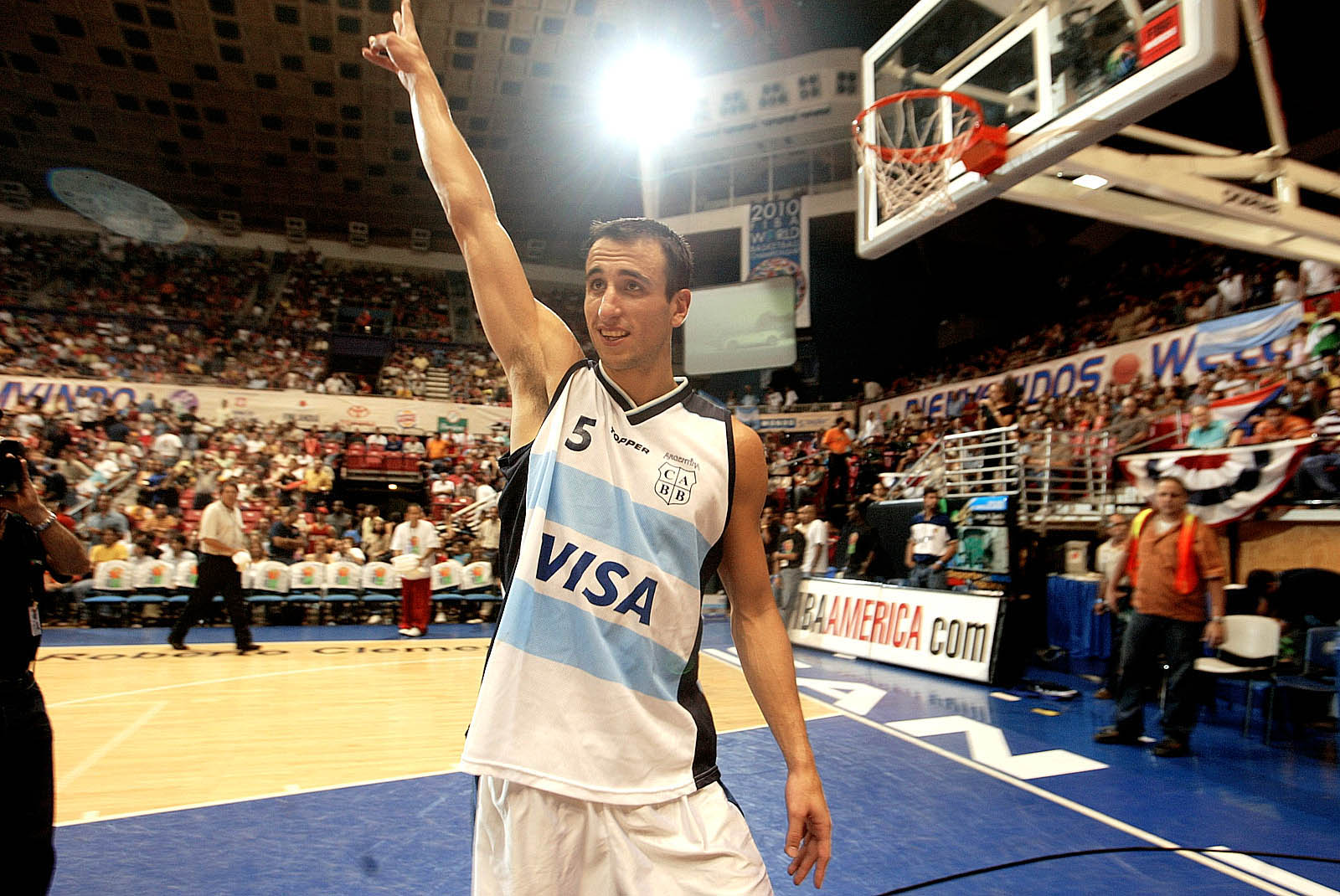 In the final analysis, I believe there is no doubt that Manu Ginobili is a surefire Naismith Hall of Famer.

I don't bother with whether he is a first-ballot candidate or not; I will leave that point for "smarter" pundits to argue. But I also do not believe that  Manu's status as a Hall of Famer can be disputed.  His career and track record, combined with the Hall of Fame's infatuation with the international game and not just the NBA (which does not have its own Hall, I might add) mean that he will be inducted not long after he retires.

He's a player that has influenced the game of baloncesta both here and abroad. The day that he walks away from the Spurs will be the day that a huge part of the winning formula in the Alamo City is lost.

Emmanuel Ginobili has acquitted himself quite nicely, thank you. He can look forward to seeing his bust in Springfield, Massachusetts, sometime around 2018—if he has stopped playing by then.