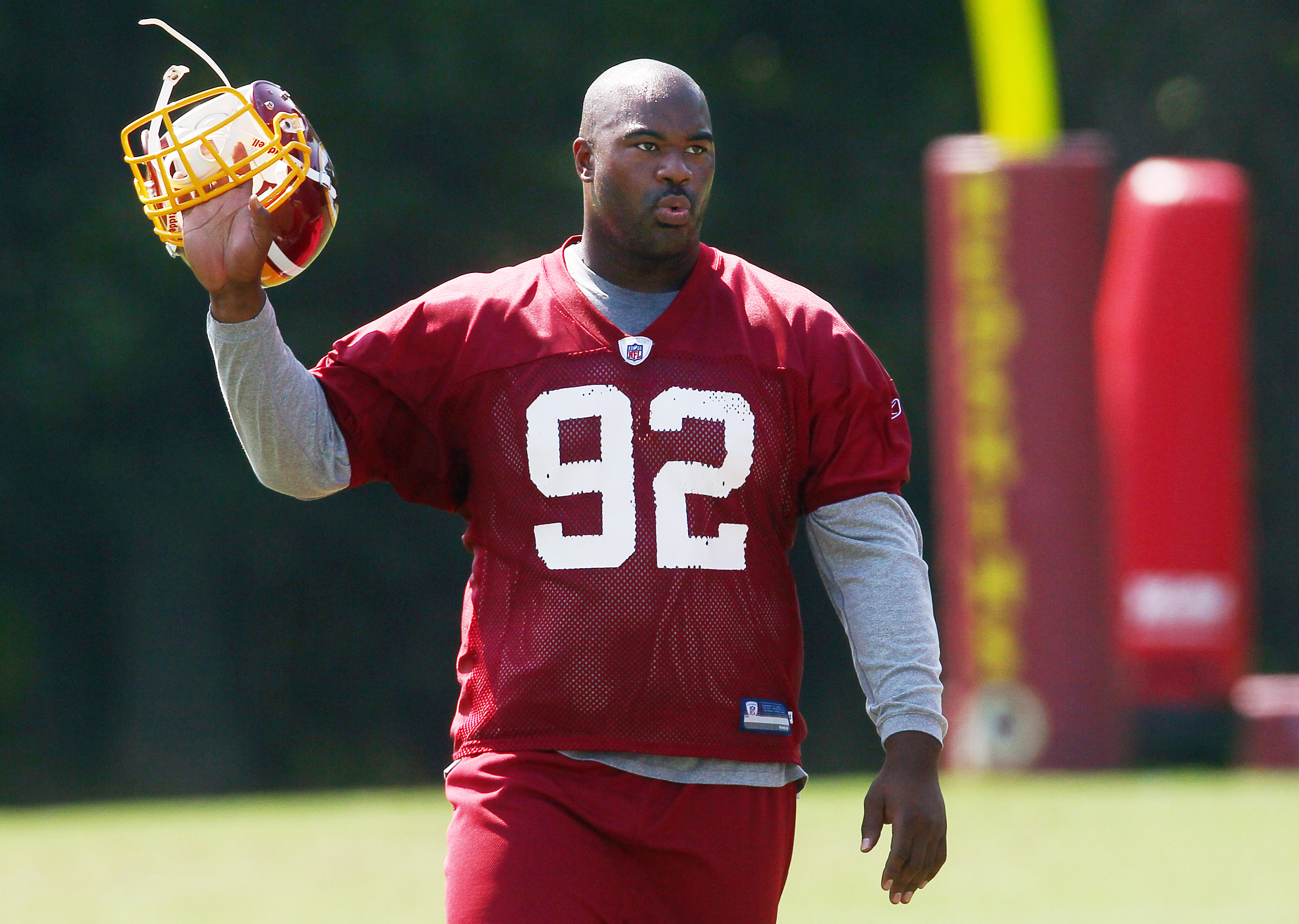 An athlete generally possess a strong degree of strength, speed, and endurance. High levels of physical fitness are crucial to almost any athletic endeavor, and are integral to nearly every professional athlete's formula for success.

Every now and then however, there exist those who do not follow this formula. These professional athletes are regarded as outliers in the fullest sense, and their ability to compete on such a demanding and fast-paced level is rather baffling. Simply put, many of these individuals don't look like they belong on in the game--they look like they should be on the couch watching the game.

Without further ado, here are 10 of the fattest athletes alive. If you're goal is to one day play professional sports, it probably would not be very wise the diets of these mammothic men. 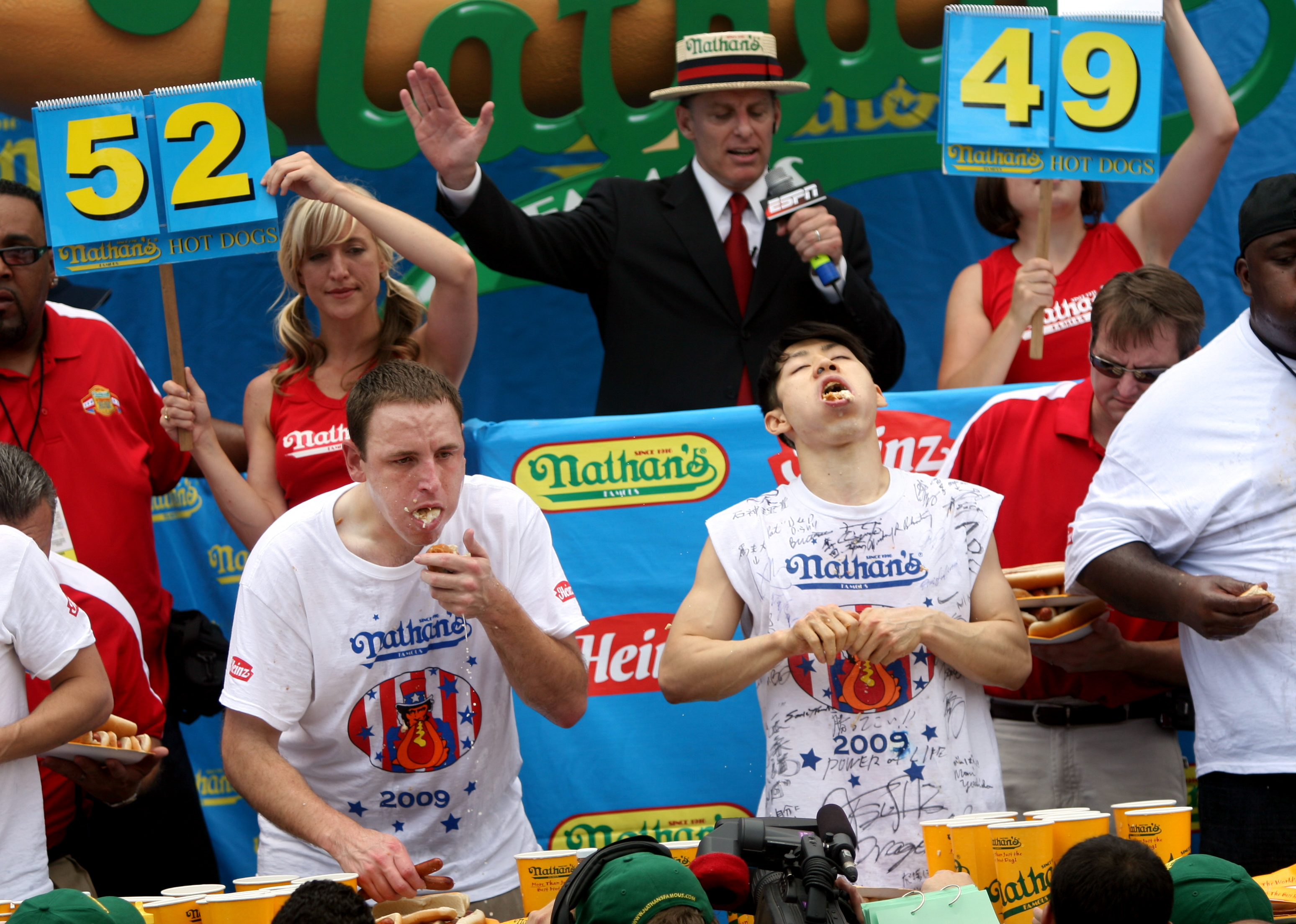 Joey Chestnut is not extremely fat, and he is barely an athlete. Why is he on this list?

Since dethroning six-time champion Takeru Kobayashi at the Nathan's Hot Dog Eating Contest in 2007, Chestnut has been widely regarded as the world's best competitive eater. He is currently ranked first by the International Federation of Competitive Eating.

The following athletes may be a little bit heftier, but their diets are slightly more tame. Just slightly. 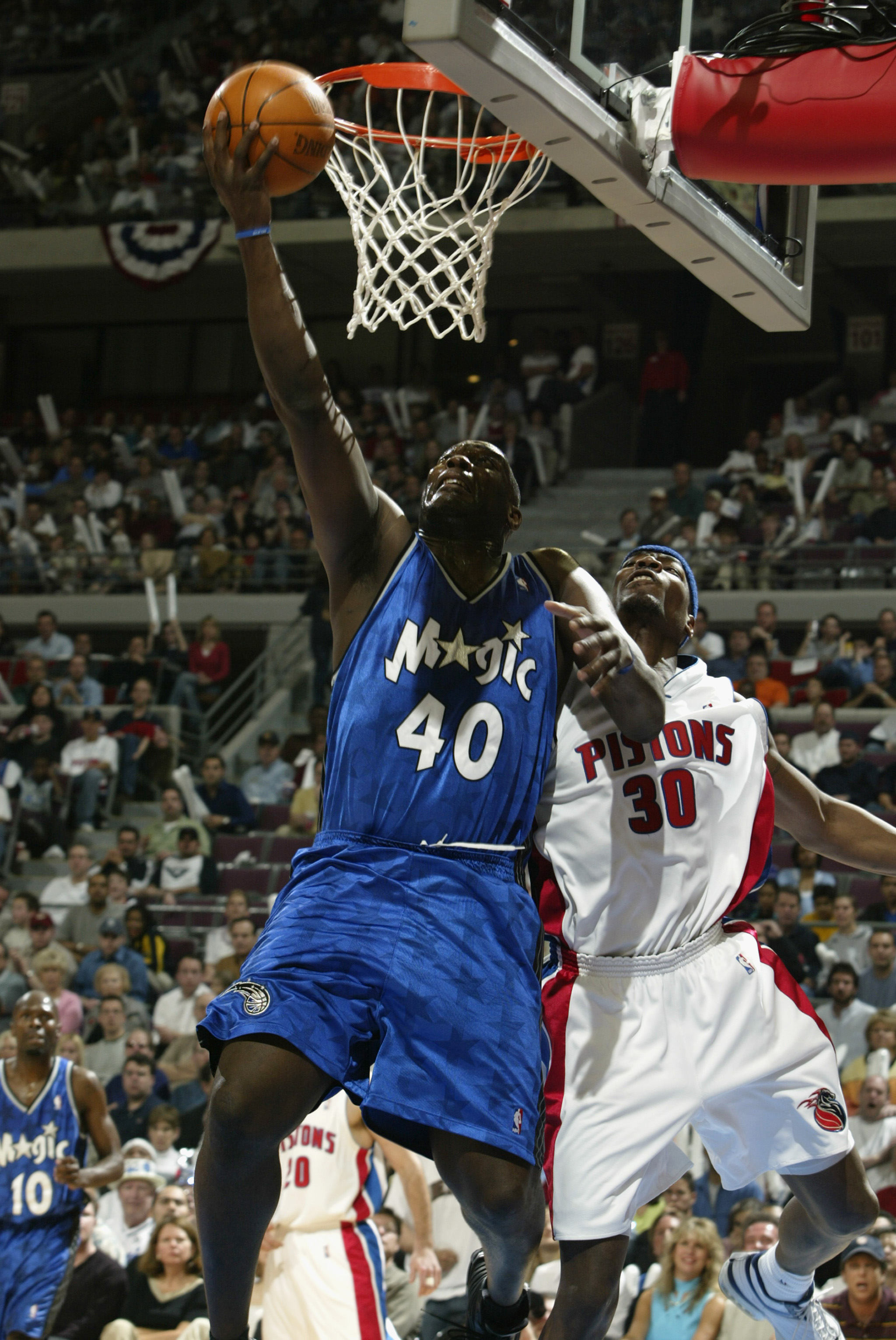 After some memorable years with the Seattle Supersonics, the six-time all-star experienced some tremendous weight problems towards the end of his career. During the 1998-1999 season, Kemp showed up to training camp weighing a staggering 275 pounds. He never slimmed down, but still managed to average 20 points a game.

He played another year for Cleveland, then bounced around to Portland and Orlando for his remaining years in the league, during which he struggled heavily with his weight. 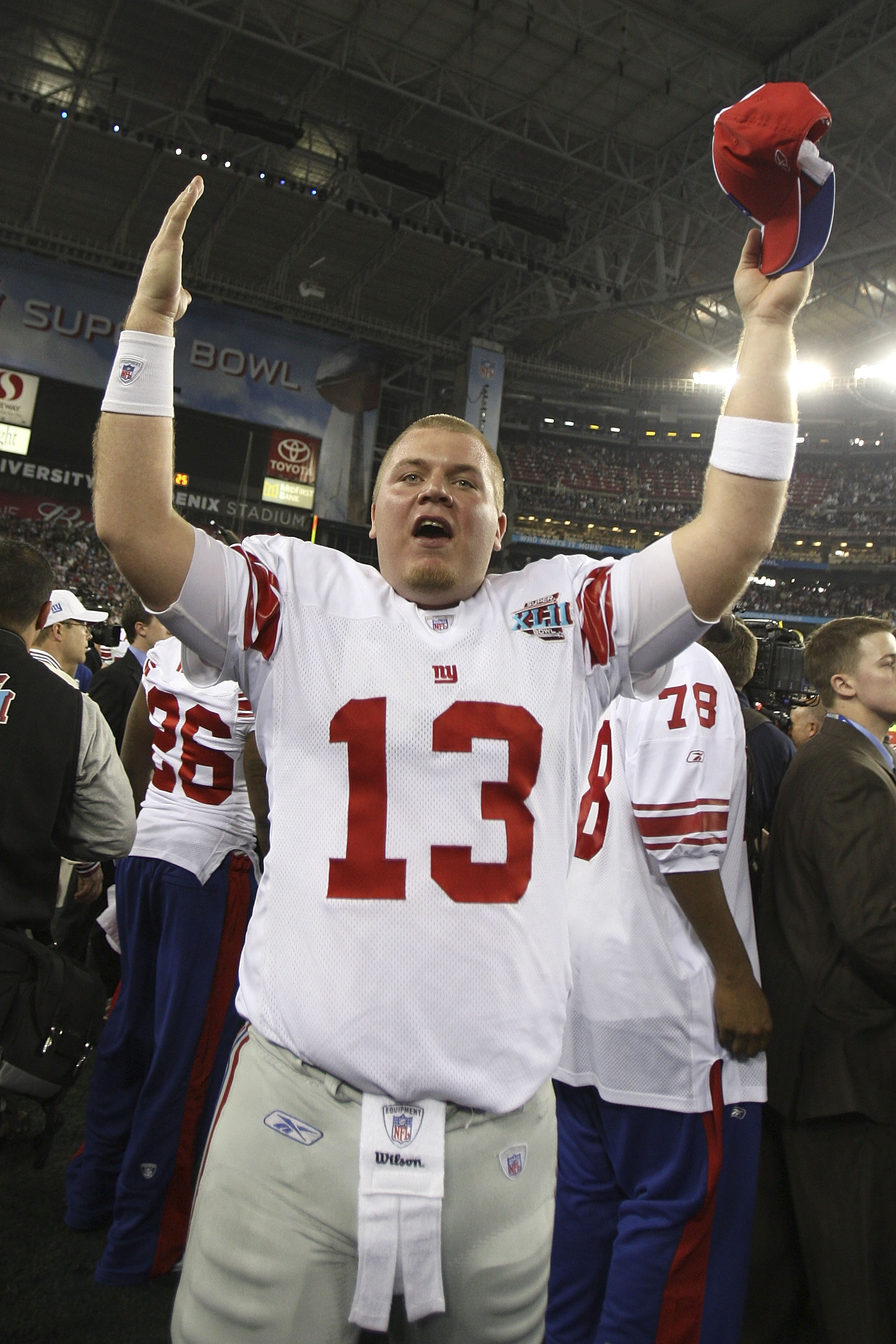 The Hefty Lefty was one of the largest quarterbacks in the history of the NFL. A standout at the University of Kentucky, Lorenzen was signed by the New York Giants in 2004 after going undrafted.

Despite never being afforded significant playing time in his four year NFL career, Lorenzen is the proud owner of a Super Bowl ring, as he served as the third string quarterback behind Eli Manning and Anthony Wright in their 2008 upset of the Patriots.

At 6'4" and nearly 300 Ibs, Lorenzen has earned a slew of nicknames for his bigness, including "Round Mound of Touchdown," "The Pillsbury Throwboy," "Battleship Lorenzen," and last but not least, "Lord of the Ring-Dings." 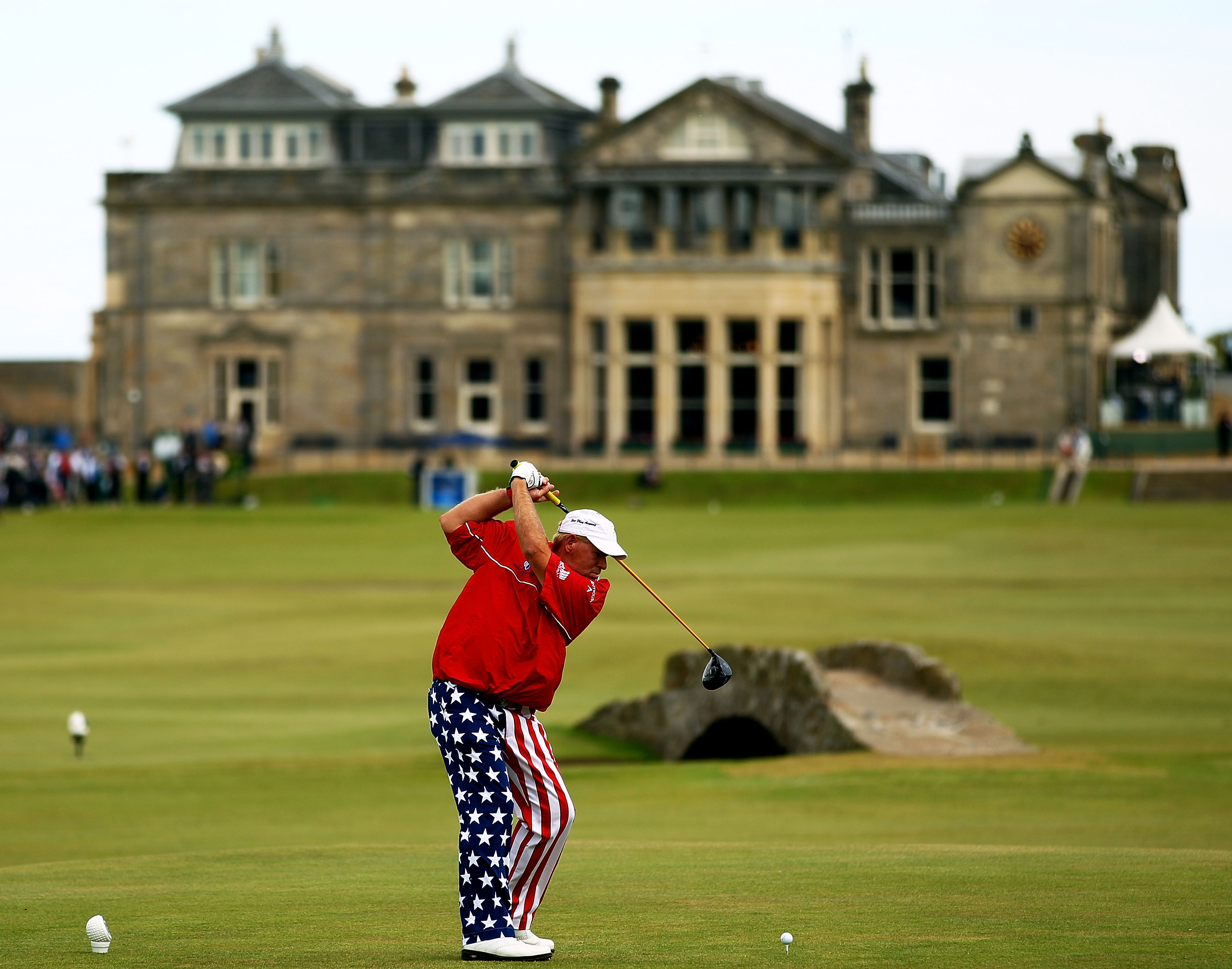 In addition to his marvelous pants, Daly was notorious for being one of the most out-of-shape golfers on the PGA Tour.

The latest chapter of the John Daly story actually has a happy ending. After suffering from a slew of health problems for nearly his entire professional career, Daly decided to undergo lap-band surgery in 2009, which supposedly limits the amount of food on can consume. Nearly 300 pounds prior to the surgery, Daly reportedly lost 40 pounds in eight weeks after going under the knife.

The Lion may not appear as scary nowadays, but he is certainly healthier. 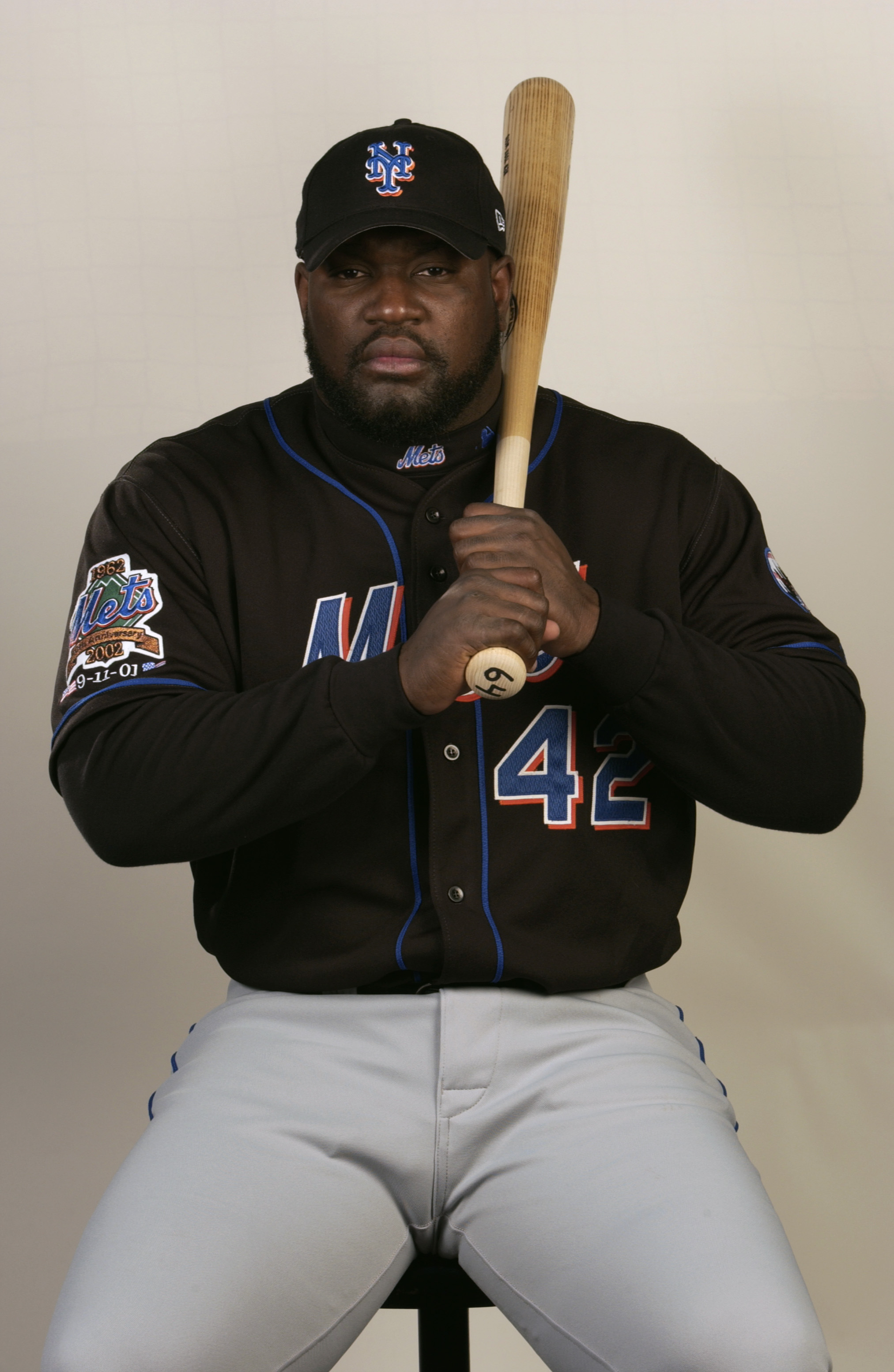 A more out-of-shape precursor David Ortiz, the hit dog was notoriously slow on the base-paths.

Although he was always on the heftier side, Vaughn fell victims to issues of extreme overweight late in his career. After being traded to the Mets in 2002 for Kevin Appier, the 275 Ib Vaughn was never able to perform up to his usual slugging standards, resulting in his vilification by the New York Newspapers. By 2003, Vaughn's knee had virtually collapsed, ending his career permanently. 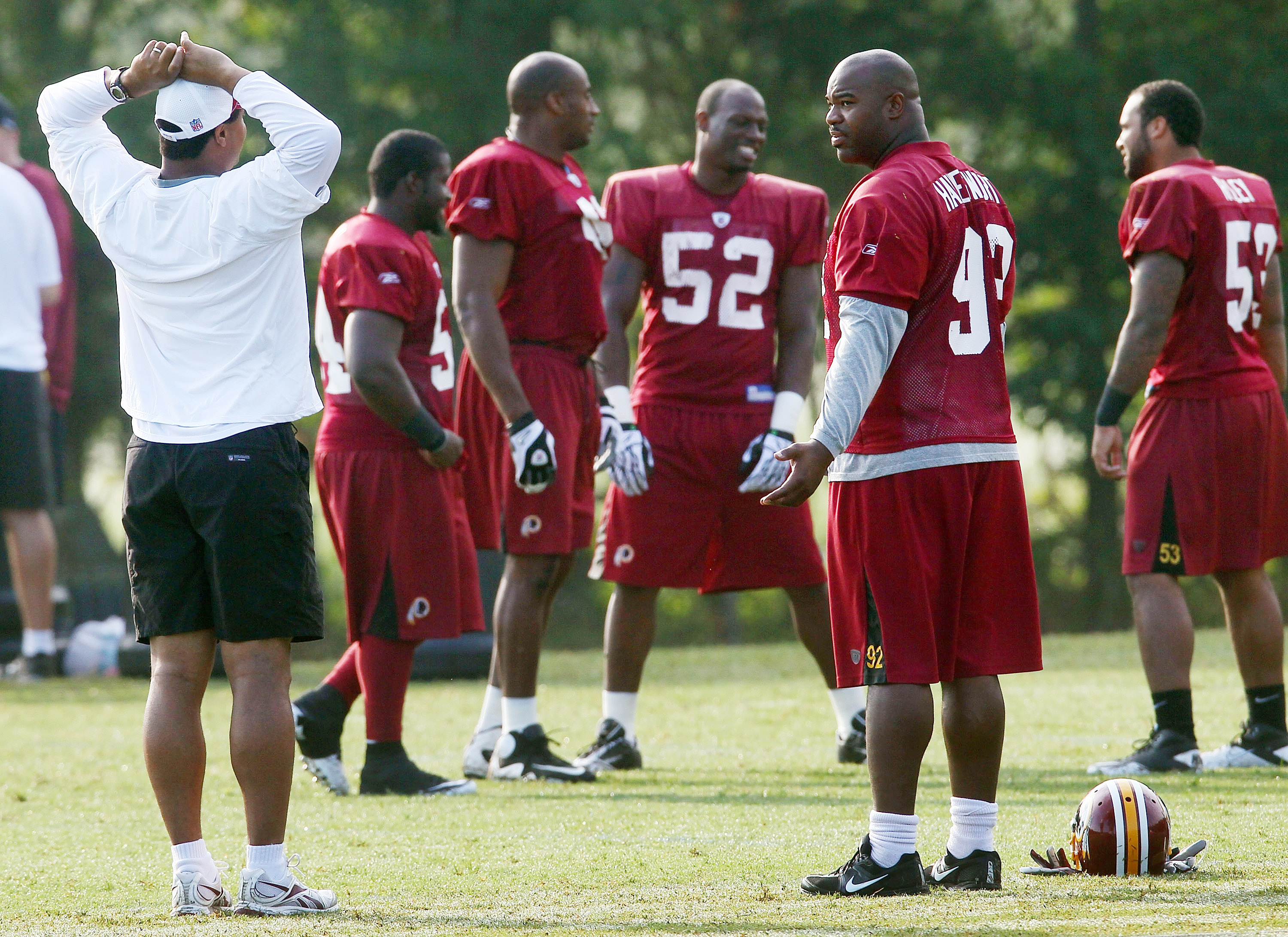 One of the most feared defensive linemen in the NFL not too long ago, Haynesworth is now one of the biggest laughingstocks of the sports world.

After not showing up to any offseason workouts, Coach Mike Shannahan mandated that Haynesworth take a conditioning test to determine whether or not he was fit enough to practice with the team.

The first time Haynesworth took the test, he failed.

The second time Haynesworth took the test, he failed.

Haynesworth is now finally practicing with the team, although the $100 million man is now doing so as a backup. If the 350 Ib defensive wants to return to form, he probably should cut some poundage. 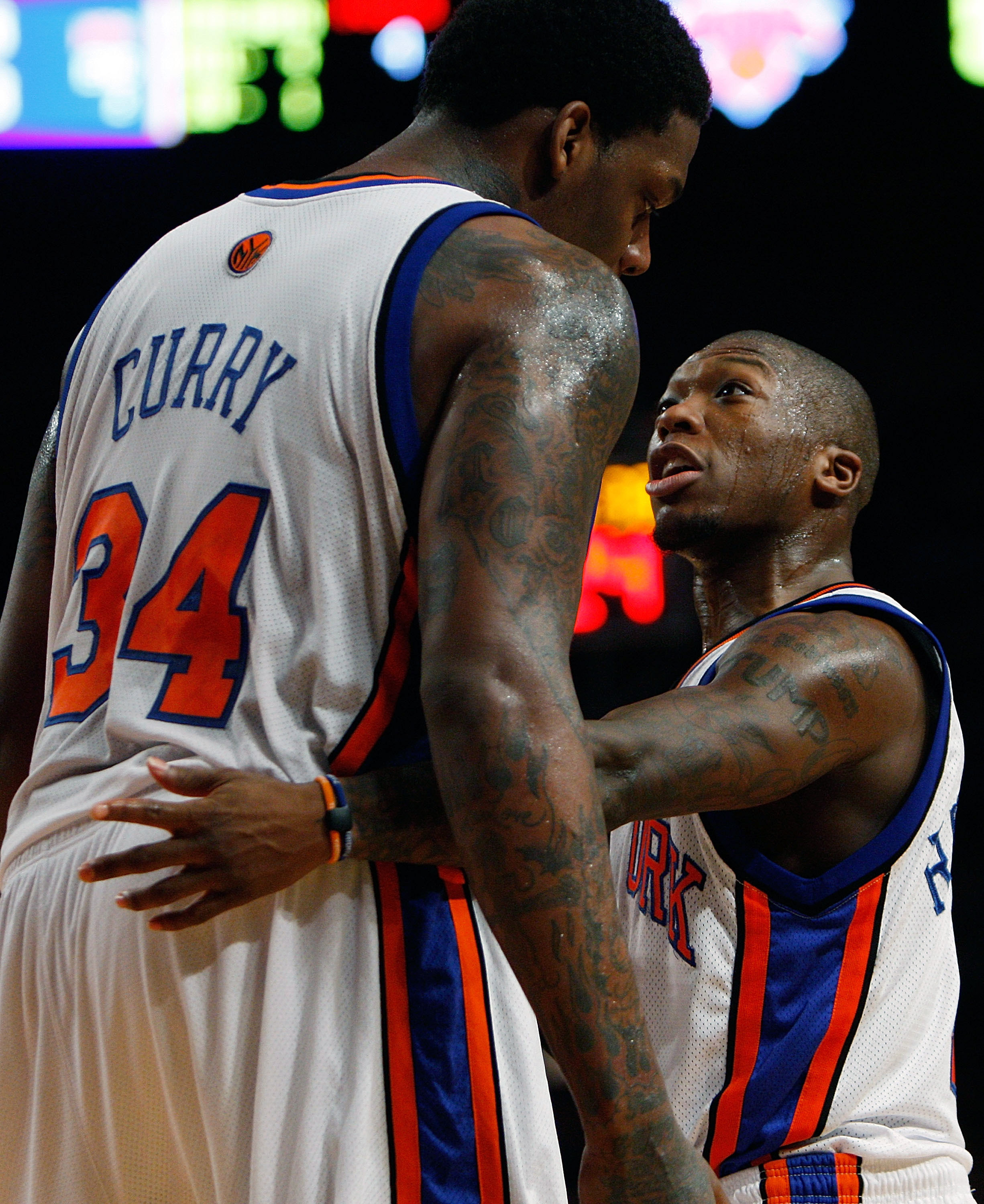 Once one of the most highly touted high school prospects in the history of the NBA, Curry is now most well known for his expiring contract. Which, like Curry, doesn't really seem to feel like moving.

Since the 7'0", 295 Ib center was drafted by the Chicago Bulls in 2001, Curry has been a tremendous disappointment. He has fallen victim to heart problems over the years, and has never been able to live up to his gi-normous expectations.

During the 2009 offseason, Curry began working with a nutritionist in hopes of slimming down. However, his trainer reportedly that it would be "delusional" to think that Curry could drop to his then-listed weight of 285 Ibs. 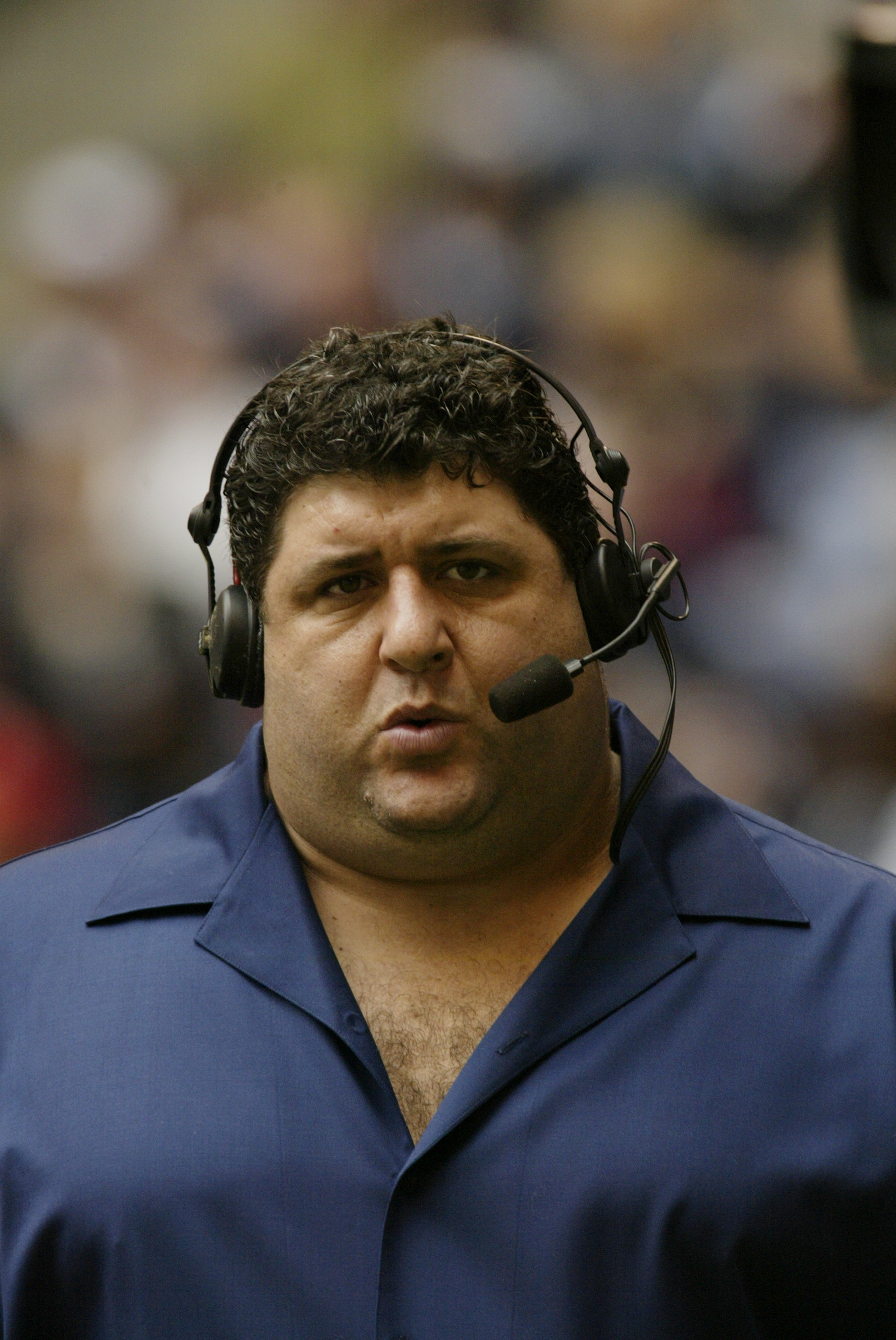 Prior to his days as a Fox NFL sideline reporter, "the Goose" marked his rather formidable territory down in the trenches.

The former DT for the Colts and Ravens weighs in at a monstrous 340 Ibs. For Joey Chestnut's sake, let's hope he doesn't take up competitive eating. 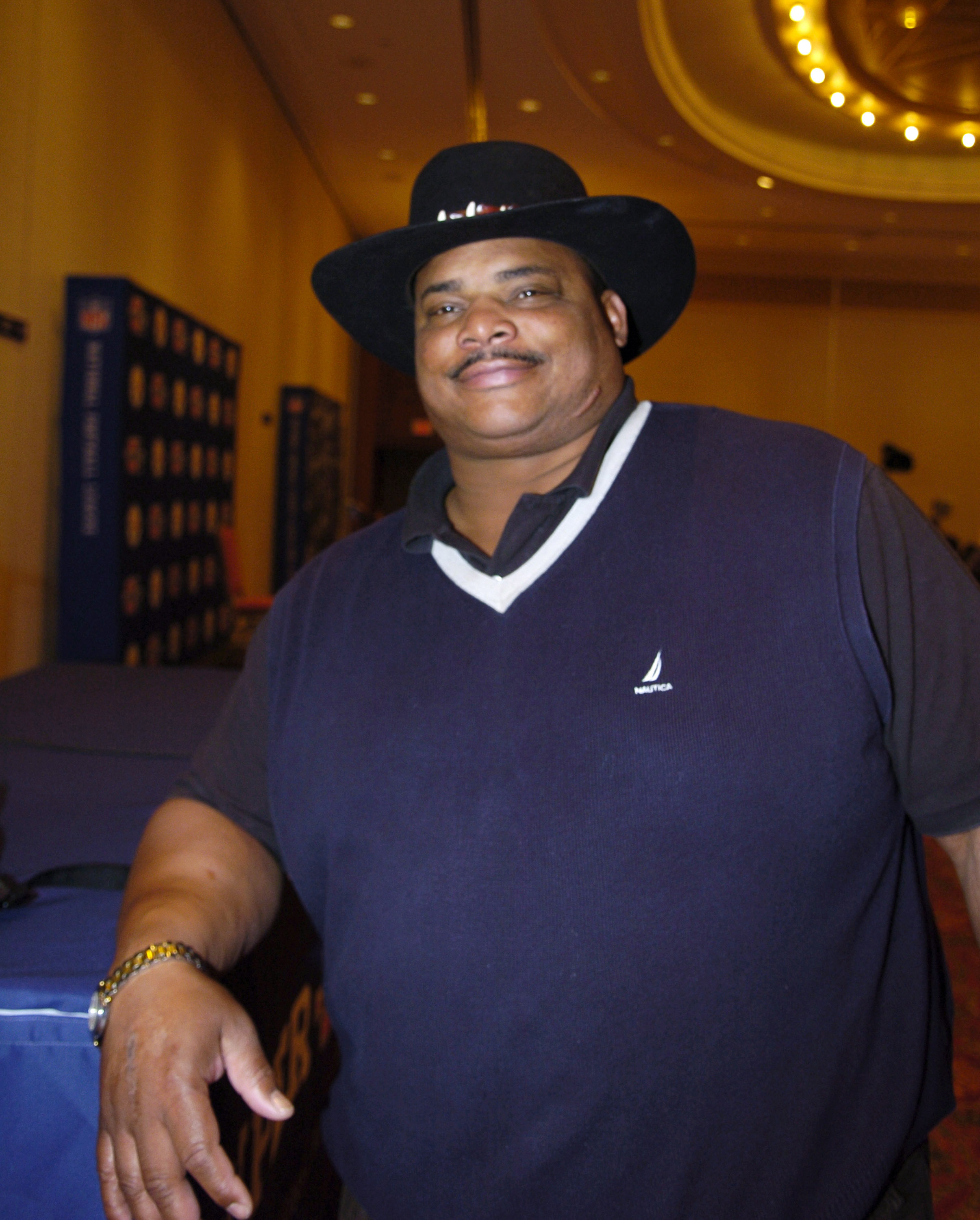 When you are named after an appliance that stores food, you're appearance on this list is a lock.

The Fridge was drafted by the Bears in 1985, who used all of his monstrous 6'2", 382 Ib frame en route to their Super Bowl victory. Perry was used as a fullback in front of Walter Payton a number of his times during his rookie season, and even rushed for two scores. 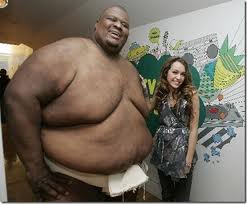 In case you didn't notice, his nickname is meant to be sarcastic.

The sumo wrestler/MMA competitor currently weighs in at 745 Ibs, and has tipped the scale over 800. Yarbrough competed in UFC 3, falling to a significantly smaller Keith Hackney, who is now known as "The Giant Killer." The 1995 World Amateur Sumo Champion is perhaps the most well known Sumo Wrestler outside of Japan, and has made various cameo's in commercials and television shows throughout the years.

Yarbrough is officially the world's largest athlete, an honor that has been awarded to him by the Guinness Book of World Records.