PGA Tour 2010: Power-Ranking the Top Sand Players on the Tour 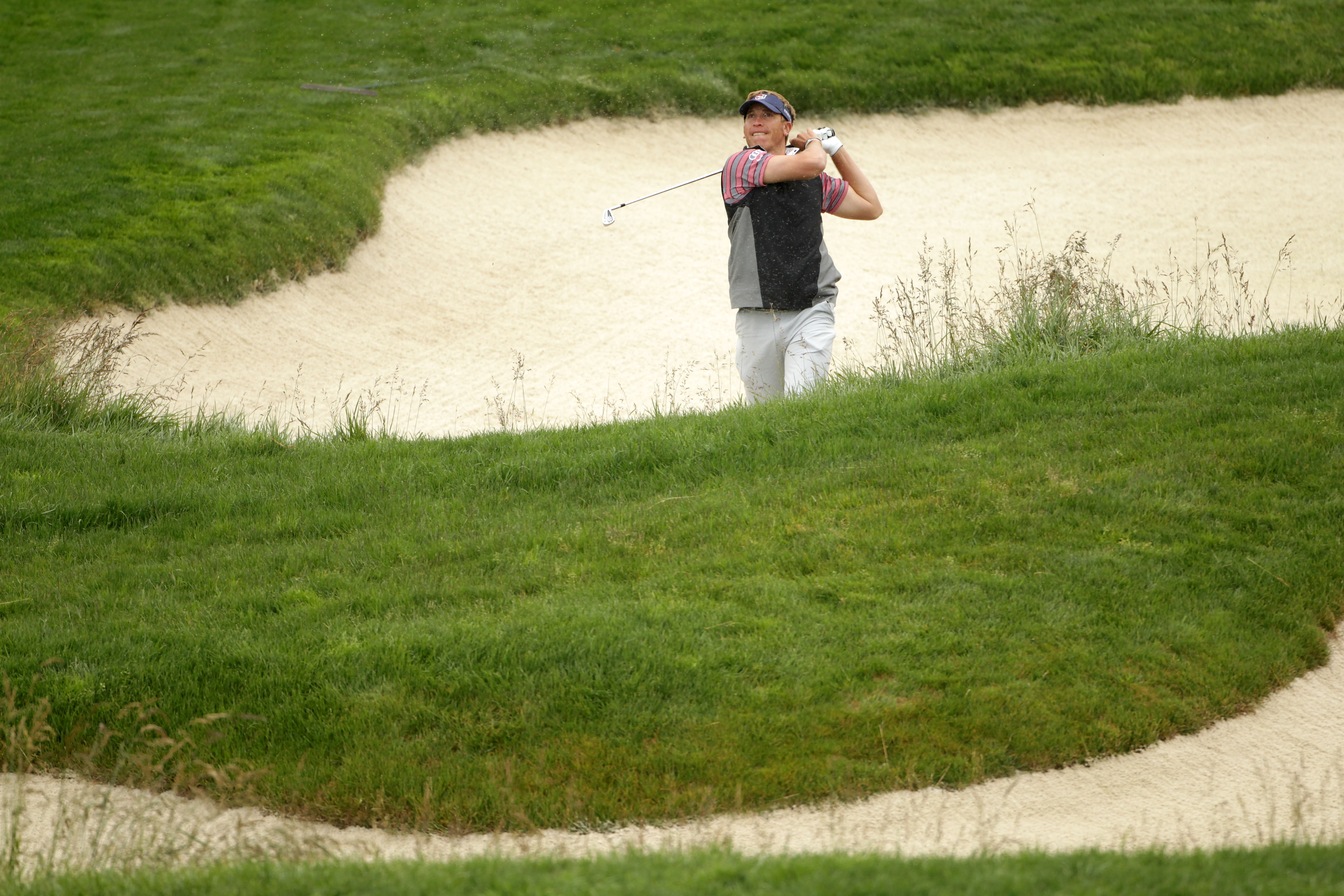 It may help a golf course look better and more tropic, but in all reality, to most golfers, the sand is one of a golfer's biggest enemies.

Hitting a ball out of the sand is truly an art, one many fail to perfect, but there are some that always excel in bunker after bunker.

So, who are the 2010 Tour players that can survive in bunkers?

I give you the top ten players of the sand. These ten golfers have taken the time to refine their skill in this lost art and improve on their success.

After all, a poor shot coming out of the bunker could change the outcome of a major championship event.

Feel free to add anyone you think should have been added in or if I missed anyone. 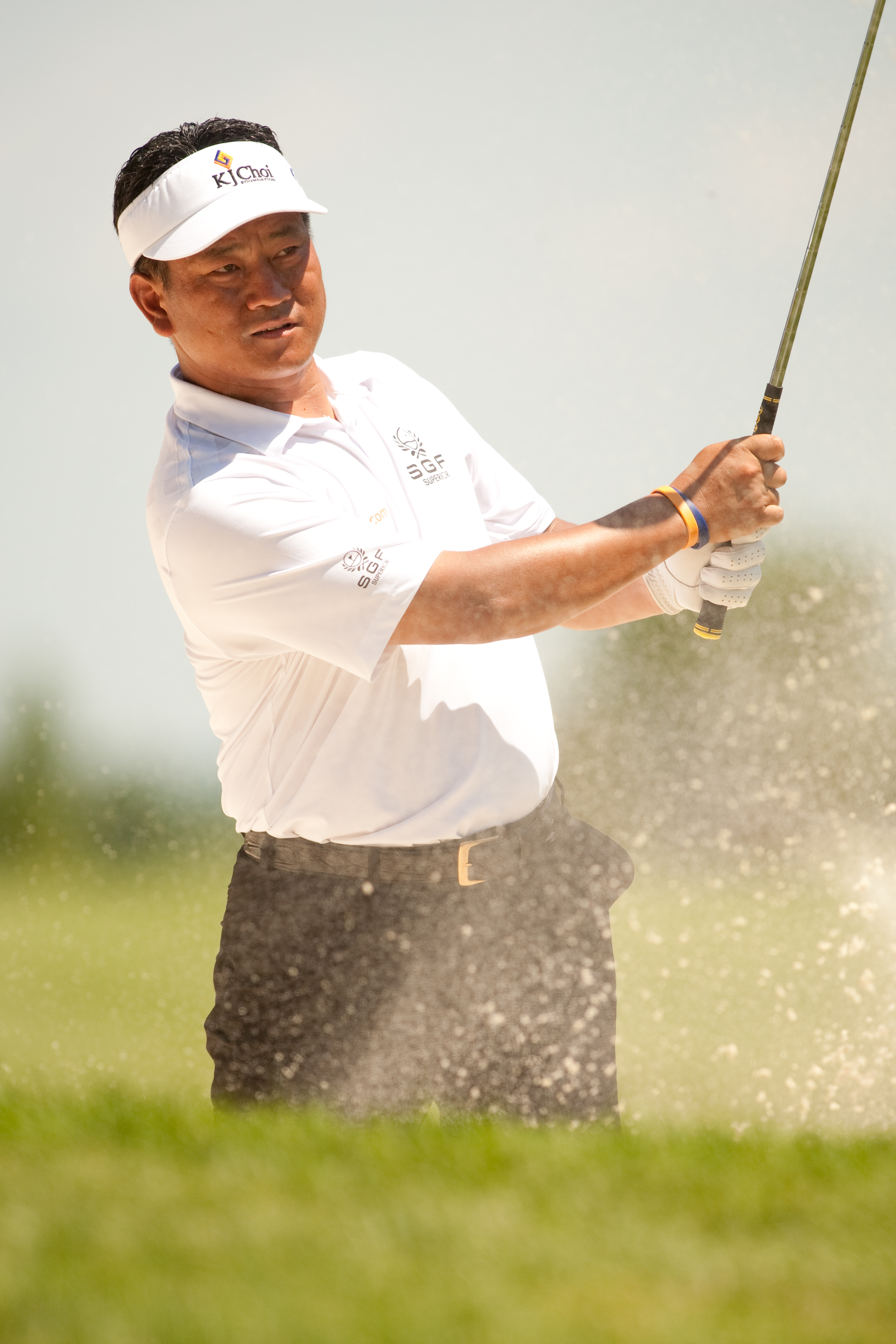 K.J. Choi is one of the best golfers to ever hail from South Korea, and in 2010, he represents them yet again as a great player from the sand.

He has proven to be quite the scrambler in his tenure on the PGA Tour, as he has shown he can make a mistake, then follow up with a nice shot. 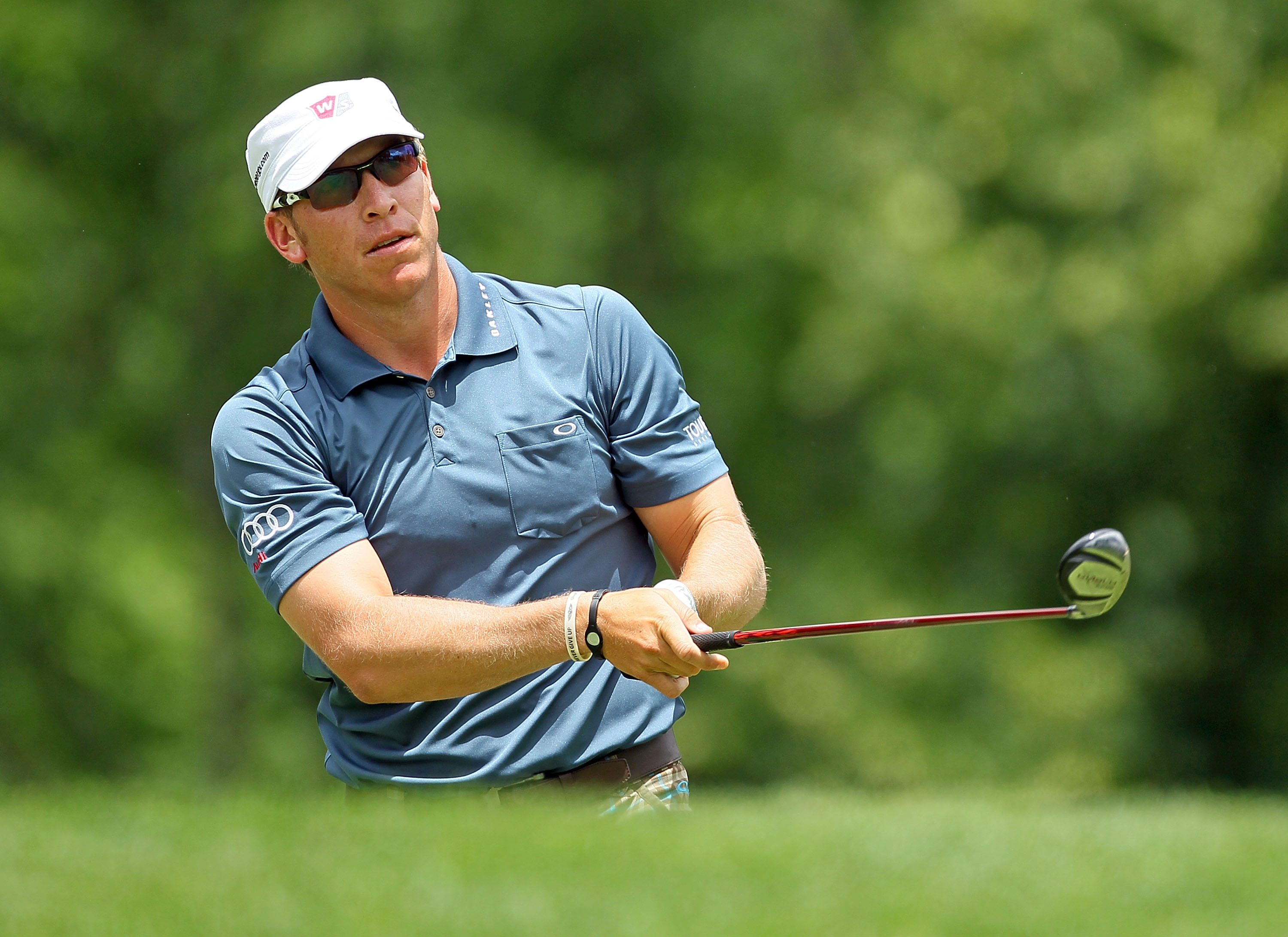 Ricky Barnes finds himself as the first American to crack the list. He also is a rather new name to these ranks, as he hasn't been anywhere close to the top in the past.

Now I'm sure I will get questions about why he is ahead of Choi, but here is my answer:

Eighty saves is very impressive, especially with 136 chances. As the chances increase, that dreaded margin of error decreases, giving Barnes the possibility of making more mistakes.

Sure, you can say the percentages are flipped, but I think those numbers are very impressive. 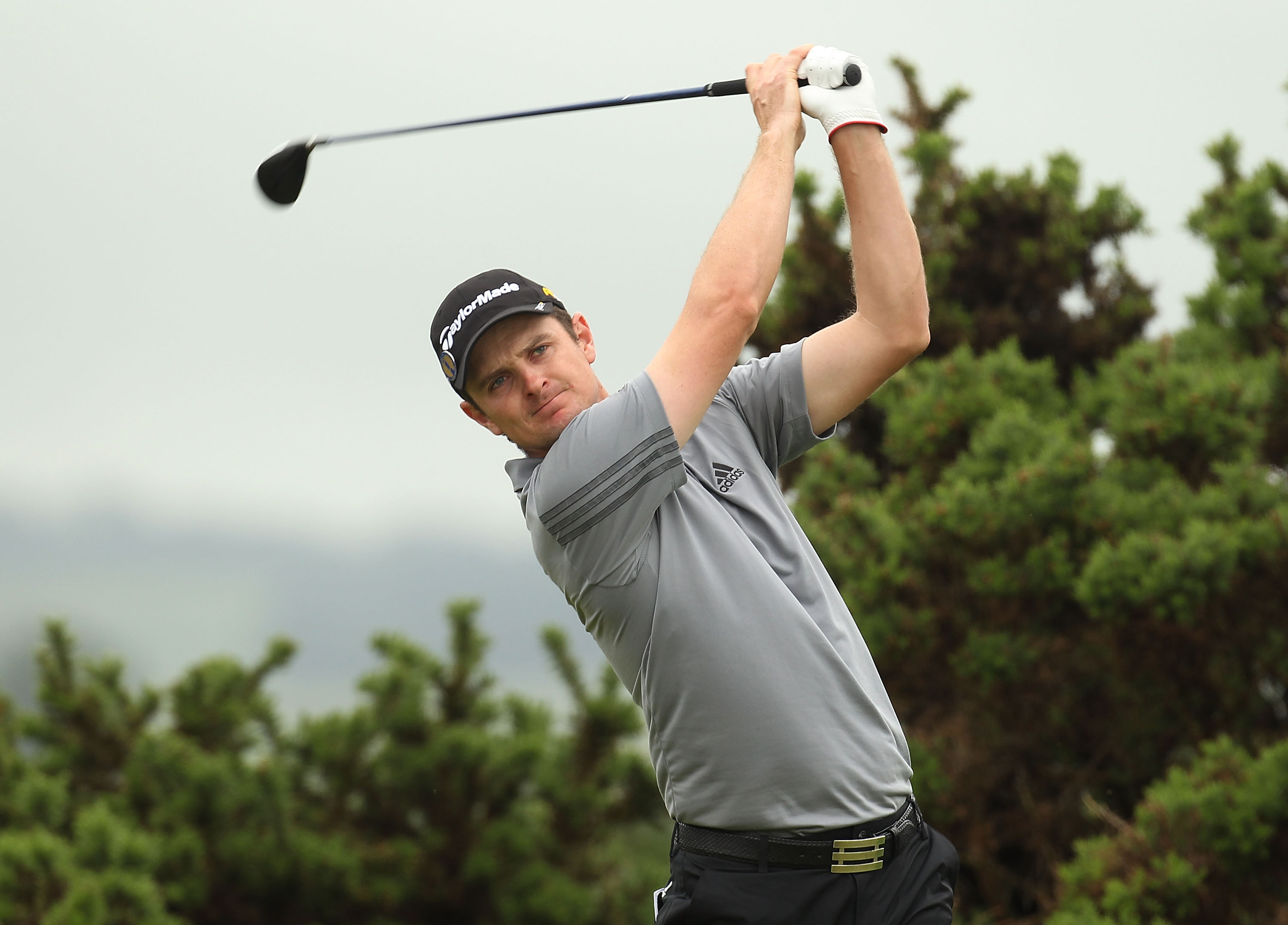 England's Justin Rose has matured before our eyes and is one of the best golfers the country has to offer. He also is good enough from the bunker to find a spot on this list.

Rose is also rather new to these top ranks, but he has gradually improved as of late. Following an overall finish of 41st in 2009 with a Sand Save Percentage of 54.78 percent, he now is looking to take over one of the top spots and continue to mature as one of the best golfers on the Tour.

How much more can this guy improve? Only time will tell. 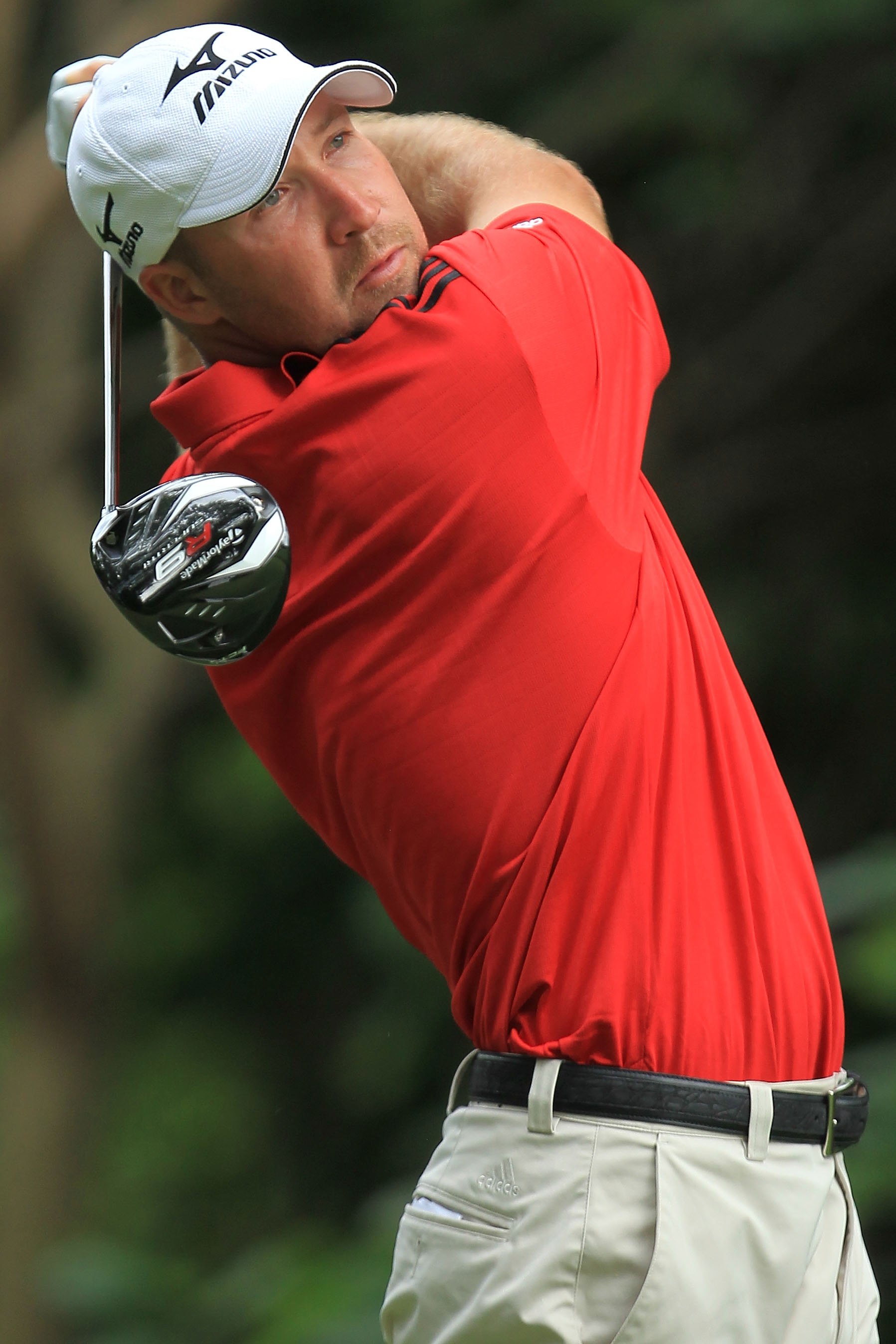 Chad Collins has been on and off the Tour since 2006, but he has yet to have a win to his name. Despite that, he can still play from the bunkers.

Collins owns a 60 percent Sand Save Percentage, as he has converted 72 of 120 attempts from the sand.

Like many on this list, Collins is new to being ranked this high in Sand Save Percentage—or anything for that matter—but you have to love this guy. He loves the game of golf and fights day in and day out for his opportunity to continue to play on the PGA Tour.

Collins is one of those guys you're just rooting for if he's around on Sunday. 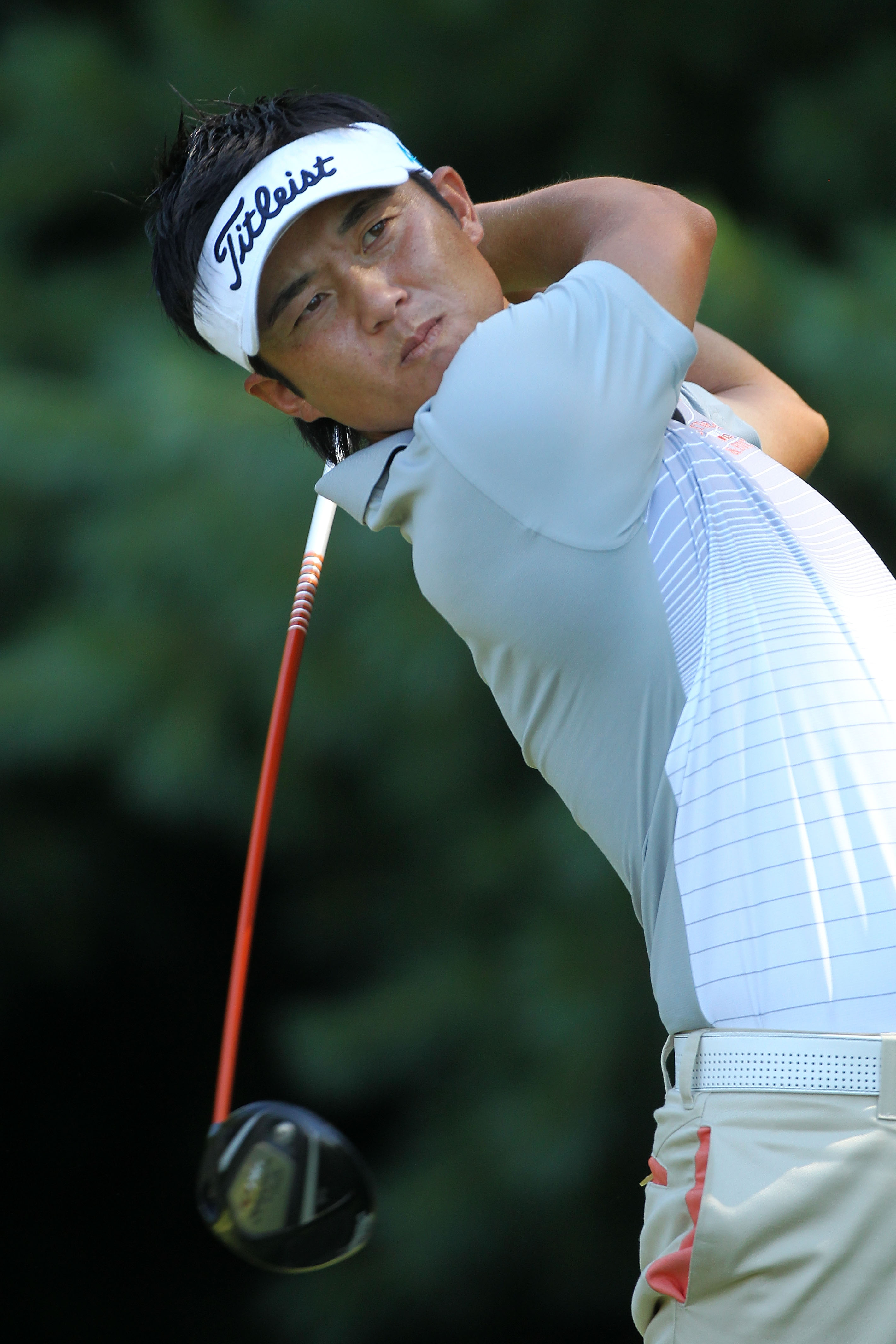 Imada is one of the few Japanese players on the PGA Tour, but he has made his stay worthwhile.

Imada has a Sand Save Percentage of 62 percent, converting 62 of his 100 attempts so far this year.

This guy is no slouch in the sand. 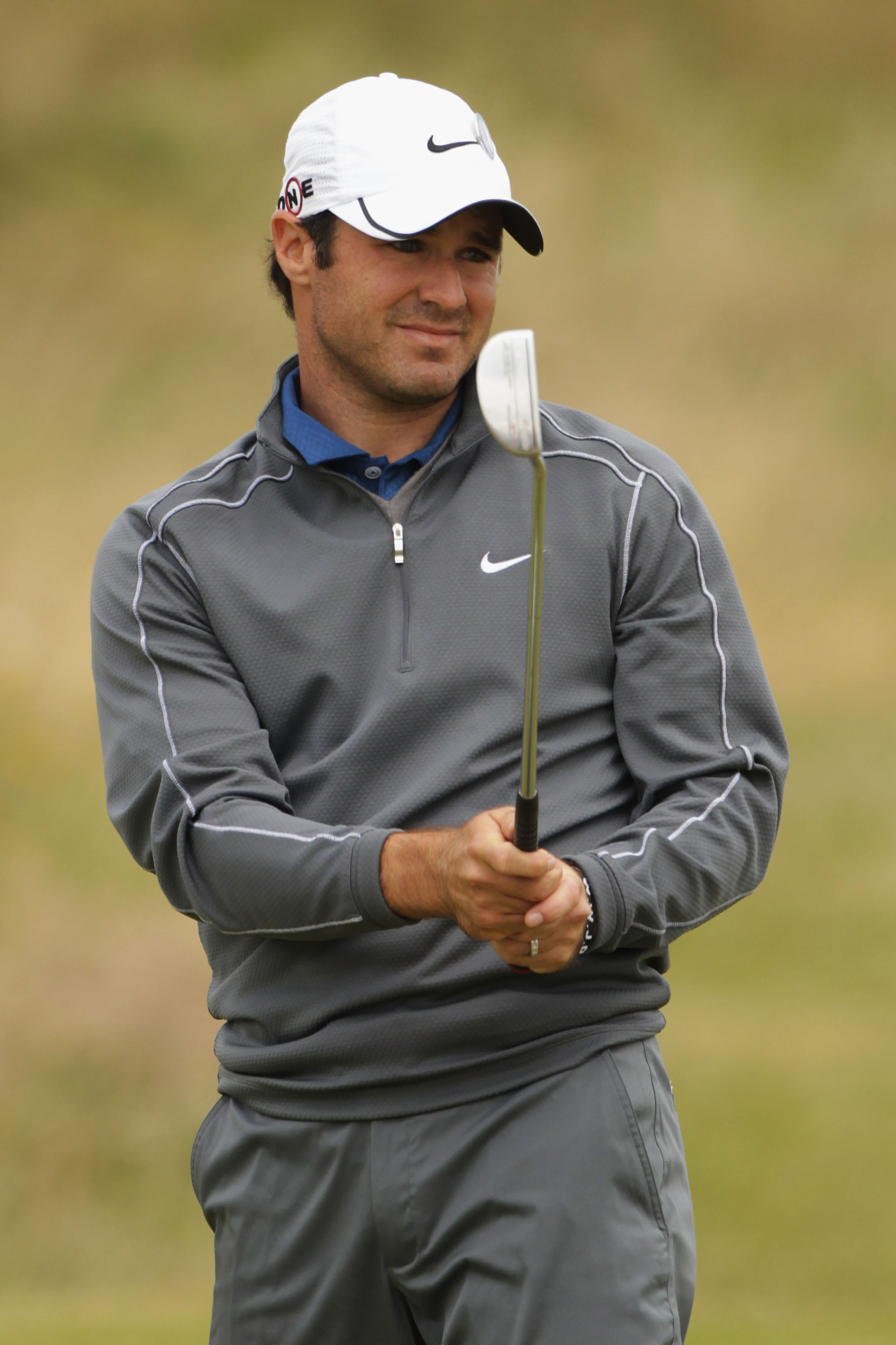 Is it just me, or whenever you hear the name South Africa, you think about those stinkin' vuvuzuelas from the World Cup and how much you hated them?

Anyway, Trevor Immelman is a prized golfer from the country of South Africa, and he finds himself a high ranking here.

Immelman has a 62.50 percent Sand Save Percentage, as he has converted 45 of his 72 attempts.

Immelman and British Open winner Louis Oosthuizen seem to be a great nucleus for the country of South Africa to build on.

Just don't build on the vuvuzuelas and we'll all be okay. 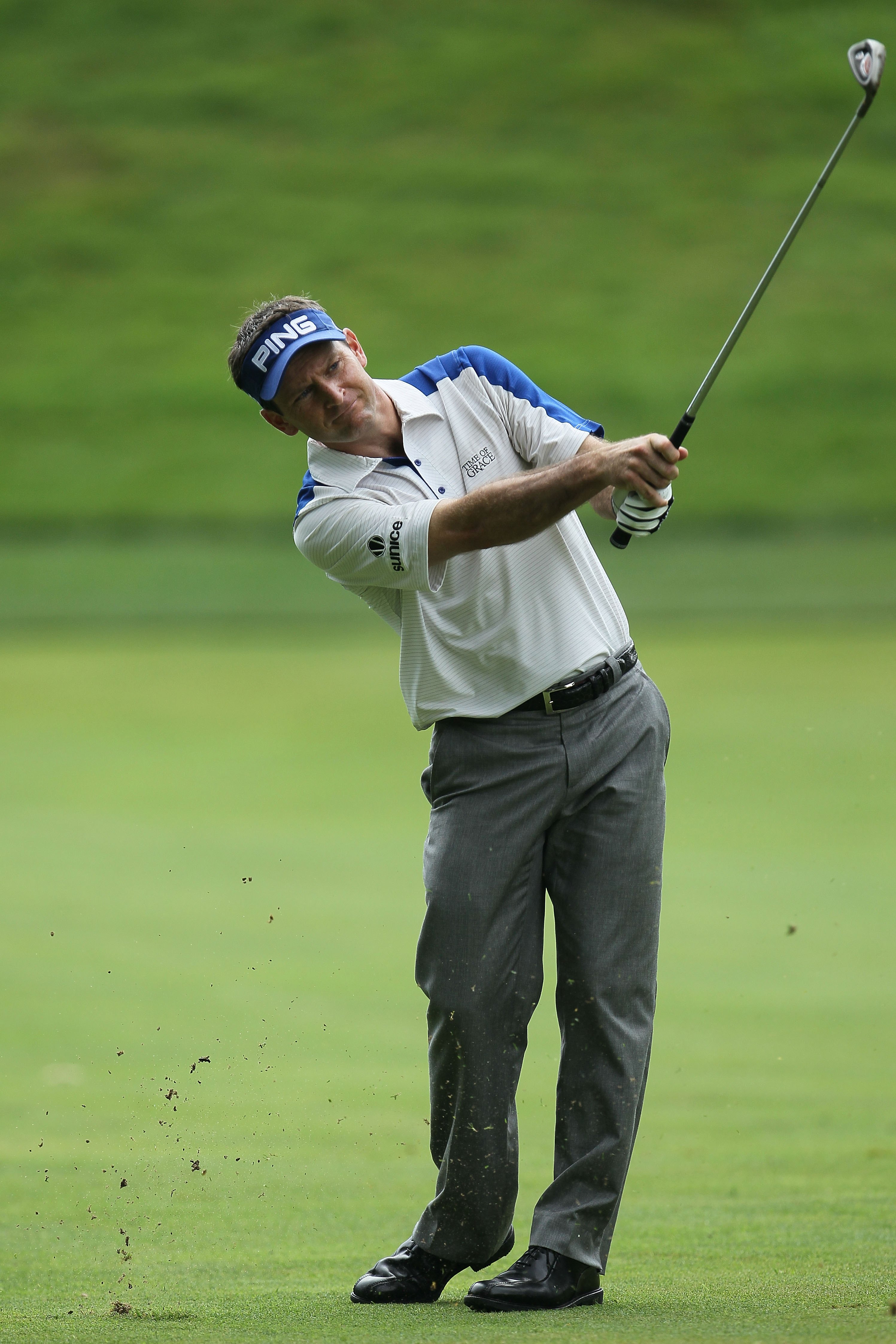 Don't let this picture deceive you. Mark Wilson may not be the biggest guy on the PGA Tour at 5'8"and 145 pounds, but he proves that you don't need size to golf, or, in this case, play from the sand.

So far this year, Wilson sports a 62.20 Sand Save Percentage, converting 51 of his 82 shots from the sand.

Like Barnes and Choi earlier in the slideshow, I flip-flopped Wilson and Immelman because Wilson has saved more shots, despite the percentage difference.

And while the saves aren't that much different, I still have to go with Wilson. 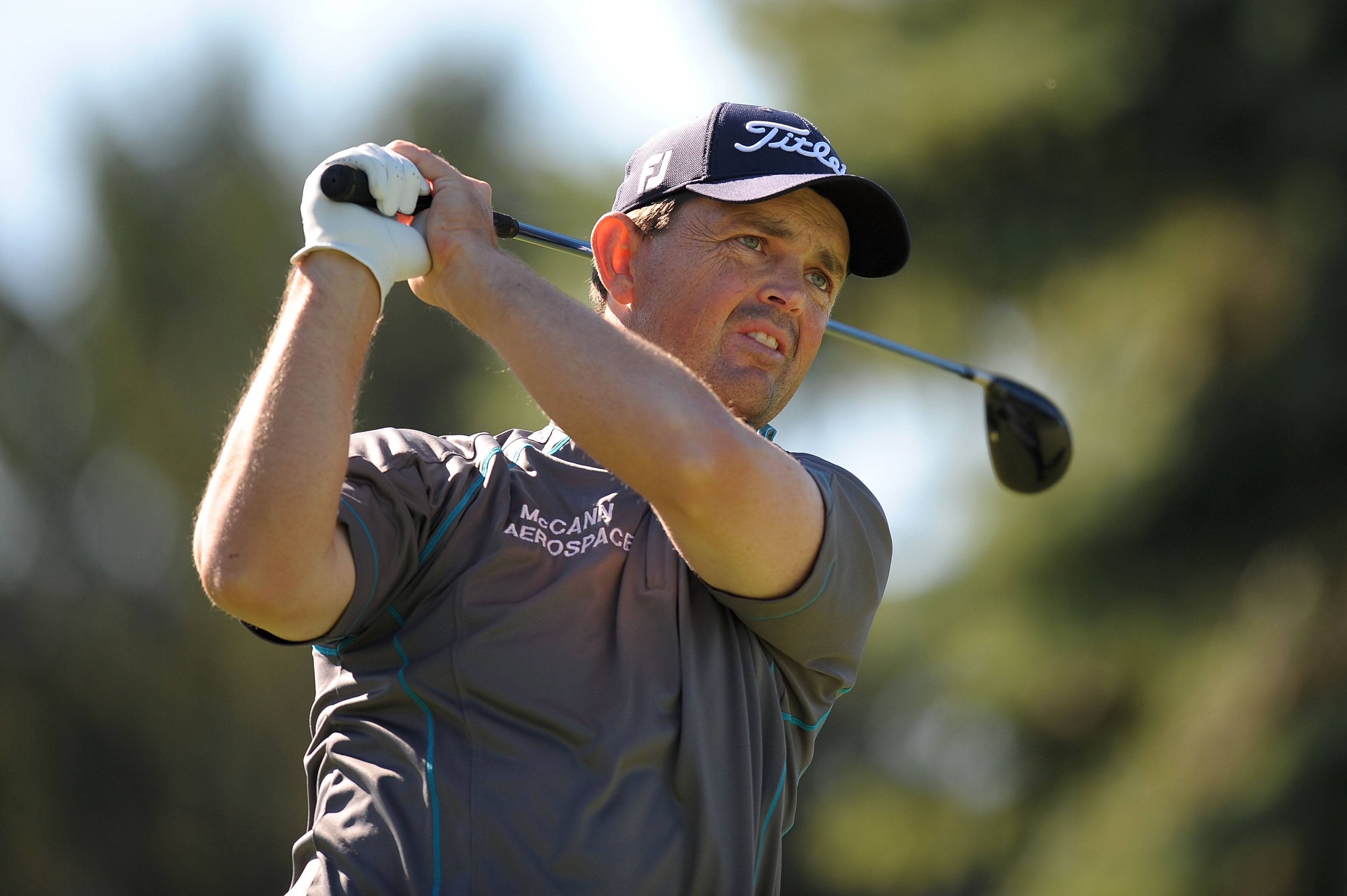 This Australian must be used to practicing under the grass and in the sand of the bunkers, as Greg Chalmers could easily be the top guy on this list.

So far this year, Chalmers has converted 62 saves in 99 opportunities, giving him a 62.63 percent Sand Save Percentage.

Chalmers is new to the top of the Sand Save Percentage club, but he fits in well.  The Australian is a real contender when he is in the sand. 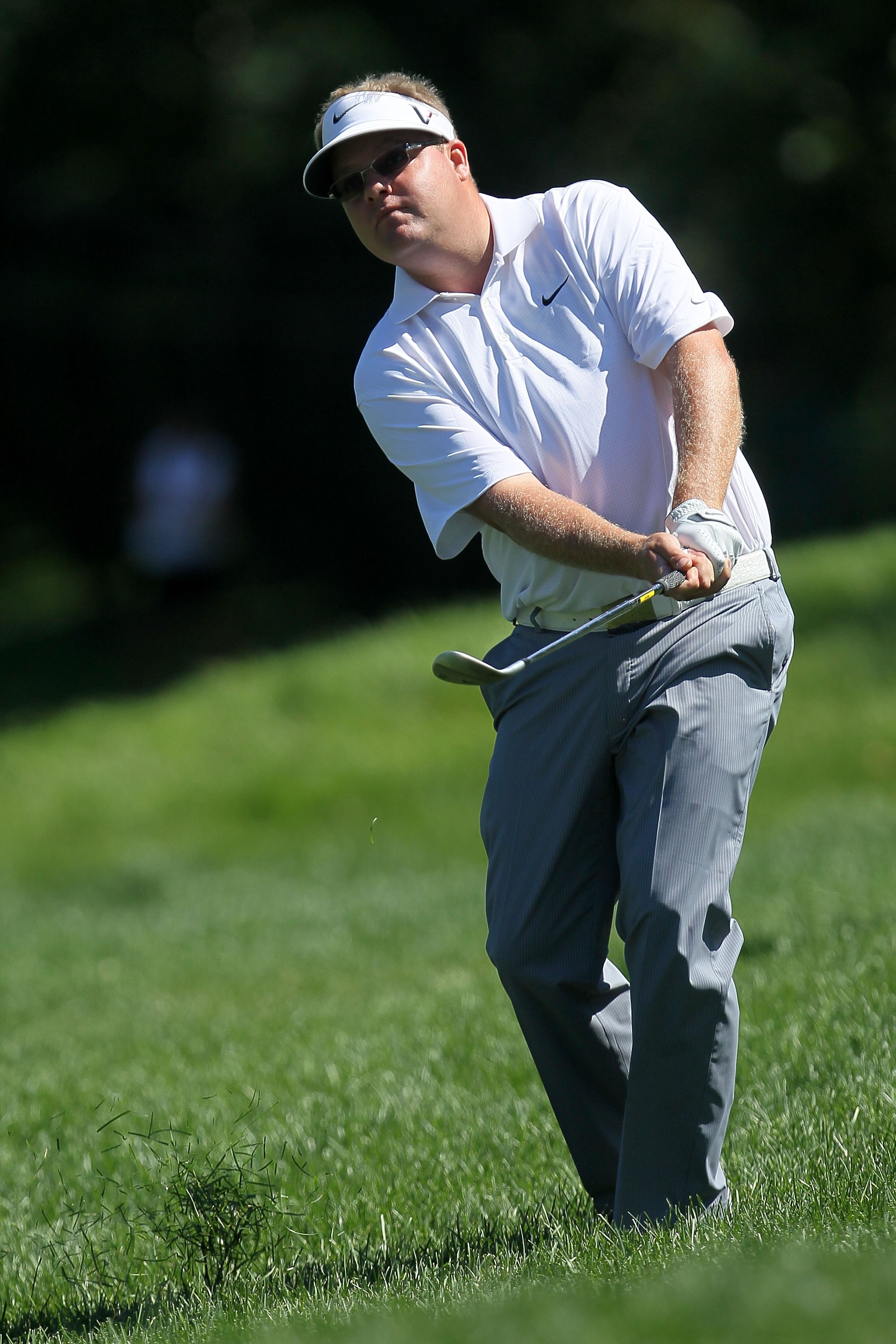 If it weren't for a very high percentage by our No. 1 ranked guy, there is no doubt Carl Pettersson would be atop this list. His stats are nothing short of stellar, amazing, unbelievable. You get the point.

This Swedish player seems to like to stick to the sand, which isn't good at times, but 82 saves is a remarkable number in my eyes. It's hard to realize how big that number is until you count to 82 and imagine hitting a golf ball out of sand for every single count.

It's a shame that he can't take the top spot, but trust me, there's better. At least one better. 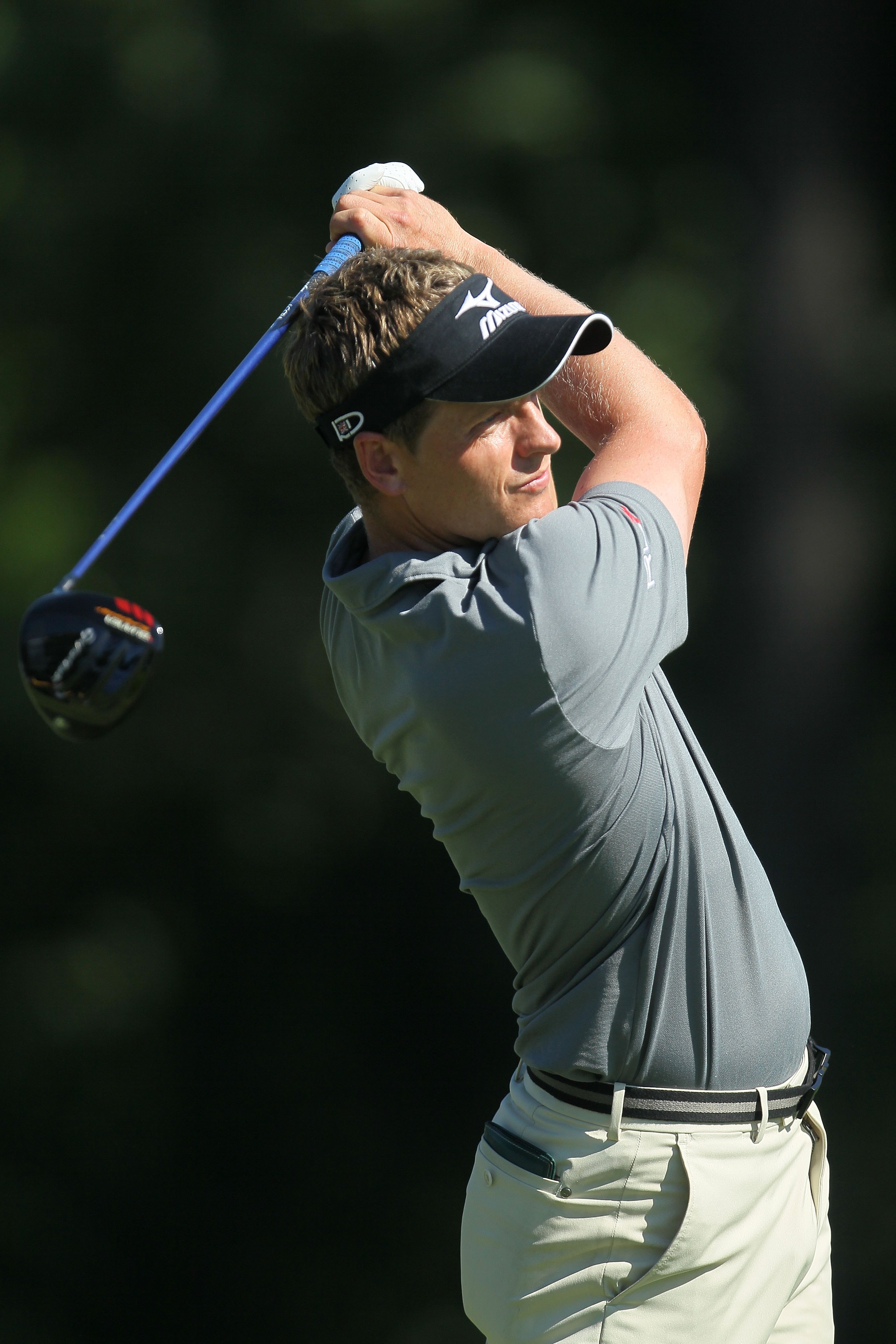 Luke Donald sits as the only player over 70 percent in the Sand Save Percentage, so there is no doubt, he is the unanimous No. 1 sand player the PGA Tour has to offer at this point.

In 76 chances, he has converted 55 saves, giving him a 72.37 percent Sand Save Percentage.

Nearly three out of four times he converts a shot from the sand?

This isn't his first time leading this category, as he held the best percentage last year at 64.43.

Donald has only been a pro since 2001, but ever since he stepped on the golf course, he has shown the world he can play out of the bunkers and erase his mistakes.

This can be a very valuable asset in crunch time on Sundays. Thousands of golfers all over the world and at every level want the sand ability this man has, but Donald plays like it's nothing to him.

Call it luck if you want, but Luke Donald of England holds the crown as the 2010 PGA Tour's best sand player.