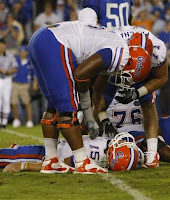 If you follow this blog, you know I have a "thing" for concussions. I believe that football teams don't take concussions seriously and put kids back in the game way too fast.

It can happen at any level of football, High School, College and of course in the NFL. If you remember when Sam McGuffie was a Wolverine, I was of the opinion he should probably quit football altogether (he actually transferred from Michigan to Rice). Having 3 concussions in one year is very serious.

If you follow HBO's "Real Sports" program, they have done a number of reports on concussions and have studied the brains of NFL players that have died in their 50's.

What they have found is that NFL players that have had a number of concussions have had an onset of early dementia or another way to say it is, their brains were equivalent to an 80-90 year old when they were only in their 50's. The show also talked about that it may not just be concussions that have an effect on the brain, the number of "regular" hits in practice and games can also cause serious damage.

With that said, the University of Michigan believes they have developed a test where football players can take right on the sideline to see if they have a concussion or not:

Using a long stick weighted with a hockey puck, the person administering the test must drop the device while the athlete tries to catch it as quickly as possible. Marks on the stick measure how quickly the athlete was able to react.

The researchers gave the test to more than 200 uninjured athletes in Division 1 football, wrestling and women's soccer to test their reaction times. During the sports season, eight of those athletes suffered a concussion and took the test again. For seven of those athletes, it took 15 percent longer to catch the cylinder.

The researchers say further clinical trials are needed, and the test wouldn't replace computerized diagnosis, but could be a more practical way to evaluate athletes soon after an injury.

This test is a inexpensive way for all football teams no matter what level to have on the sideline to test for concussions. As you might imagine, going back into a football game after getting a concussion can cause serious damage or even death.